The action is gearing up on Natural8 and poker players from all over the world are taking part in the second edition of the Asian Poker Tour Online Series, the biggest online festival to date geared towards the growing Asian market.

Two Natural8 players were among the winners on the first day of the festival on June 14th, 2020 Lester “mon$terDad” Edoc took home the trophy in the $50 APT Mini Main Event whereas “propofol-san” took home the biggest slice of the six-figure prize pool in the $300 APT Opening Event.

The next progressive bounty event to wrap up came with a buy-in of $210 and “Geraldine84” topped a field of 151 entries on a final table with eight different nationalities represented in Event #23 to earn a payday of $7,789.57.

The top 17 players out of 117 entries earned a portion of the $55,575 prize pool whereas “@FickleFoxx” and “fish3098” received their buy-in back thanks to the bubble protection. Two players from Canada ended up in the top three and “RUADONK?” scored $12,120.42 to claim victory. 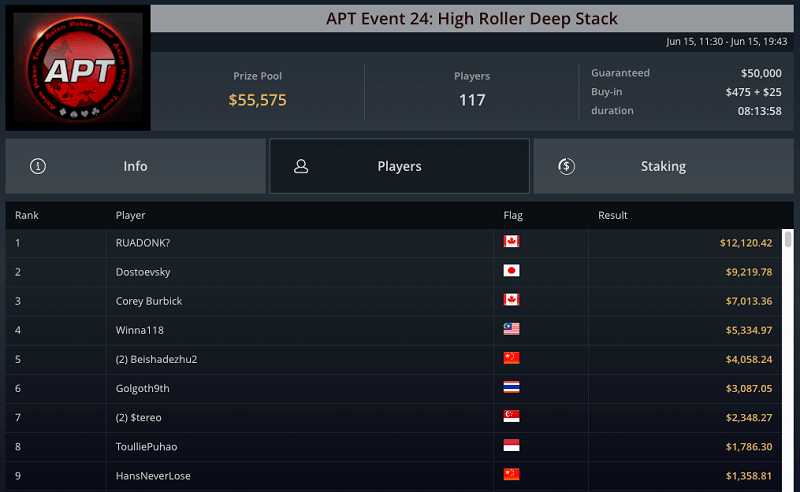 The most-expensive tournament of the schedule so far saw a field of 79 entries emerge in Event #27 $1,000 High Roller and Taiwan’s Pete “TurboPete” Chen finished as the runner-up for $13,874.31. Chen had already won a trophy in the inaugural APT Online Series but it was “Theprofessor44” that earned the bragging rights and a top prize of $18,213.72. 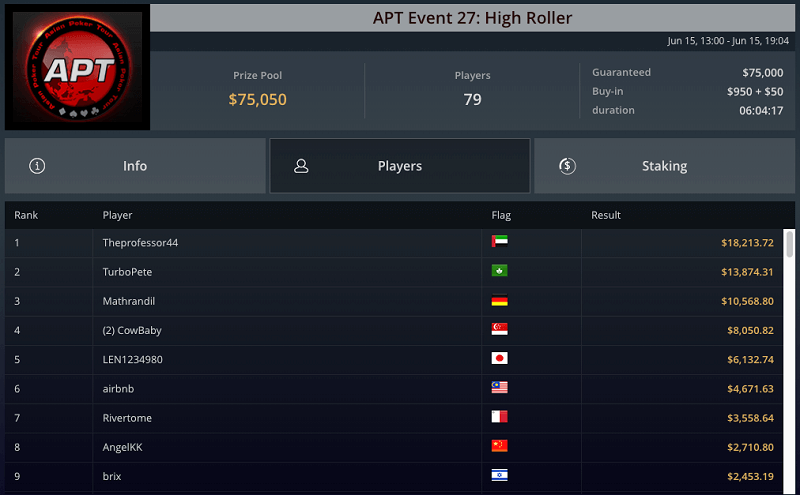 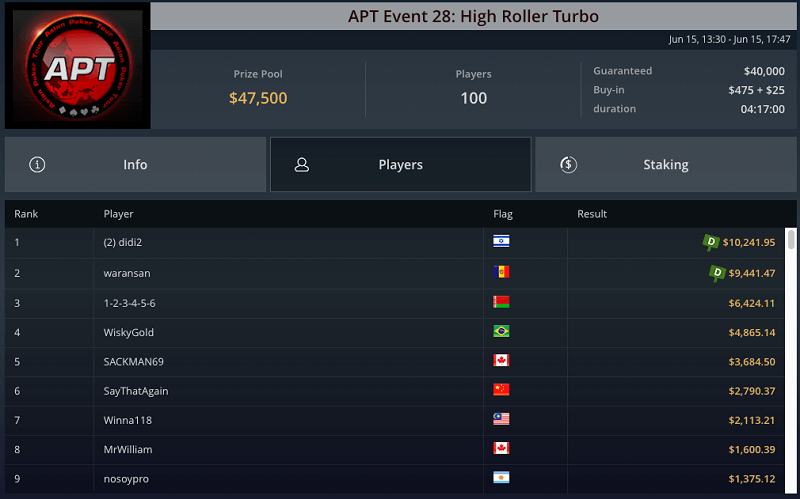 A total of 15 APT tournaments concluded on the second day of the festival and the first three flights of Event #18 $200 Monster Stack determined their finalists. Out of the 311 entries so far, 101 hopefuls advanced for their shot at the $100,000 prize pool. Two flights remain on June 16th to earn a spot for the final which wraps up on the same day.

Teoh has already punched his ticket for another deep run and some other notables that made it through include Sergei “Futti18” Koliakov, UK’s “manners1990”, “WhiteDuck”, “@FickleFoxx”, Simon “Fireburns” Burns and Corey Burbick. Turkey’s “fish3441” takes 327,441 chips into the final day as the current chip leader with more than 80 big blinds at their disposal with returning blinds of 2,000/4,000 and a big blind ante of 500.

More High Rollers action await in the days to come and the eyes will be set on the upcoming Super Sunday which offers two two trophies up for grabs in the $500 Main Event and the $5,000 Super High Rollers on June 21st, 2020. In the meantime, do check out our exclusive Natural8 promotions as well as our Natural8 Exclusive $10,000 APT Leaderboard.

Previous Article
Tournament Overlays: How You Can Benefit From Them
Next Article
APT 2020 Online Series 2nd Edition Highlights 2