2 Millionaires Made on Natural8 in WSOP Event #48

Saturday, August 8th 2020, was a day to remember on the virtual felt at Natural8 as three players were going for the coveted gold bracelet and two of them battled for the win in Event #48: $1,500 MILLIONAIRE MAKER.

After surviving their respective starting day 1’s and then going all the way in to the final nine players out of a large field of 6,299 entries, the stage was set for the grand showdown and the lion’s share of the $8,976,075 prize pool.

Canadian High Roller regular Daniel Dvoress, who opted not to travel to Las Vegas in previous years to compete for poker’s most well-known and precious award, went into the final table as chip leader by some margin. There were plenty of short stacks and two Brazilians had also made it all the way while playing on Natural 8: Neville “NevSlater” Endo Costa was in the middle of the pack, while Caio “Ez4ENCE” De Almeida was the second-shortest stack when play resumed. 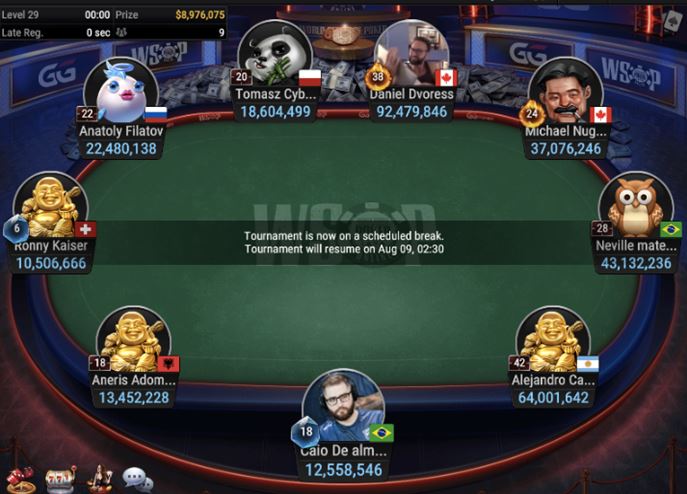 The intense circumstances in terms of big blinds available and huge pay jumps for outlasting just one more player eventually resulted in an incredibly fast-paced final table, which wrapped up a mere two hours after the action was underway.

De Almeida, who is the brother of Natural8 streamer Daniel De Almeida, immediately scored a double when he held with pocket queens against the ace-queen of Michael “MrFabulous” Nugent. The first to fall was Lithuania’s Aneris “TaiwanNumba1” Adomkevicius who lost a race with ace-king versus nines. Moments later, Tomasz “SushiJanushi” Cybulski ended up second-best with ace-six versus pocket sevens.

High stakes cash game player Ronny Kaiser secured two pay jumps but eventually bowed out in 7th place. It was yet another one of those pesky flips with sevens against ace-jack that ended the tournament for the Swissman.

Up next, two Natural8 players would clash and it was Endo Costa who had to settle for $288,356 as his ace-eight could not hold up against the jack-six of Dvoress. With just over $40,000 in recorded live cashes, it was still by far the biggest score for the Brazilian.

De Almeida escaped from elimination once more when his ace-eight rivered two pair against the ace-nine of Alejandro “pepealas” Caridad and from then on out, it was pretty much all about Dvoress despite several hiccups, who had nearly two times as many chips as Caridad by that point.

After doubling four short stacks, Dvoress regained his comfortable lead by winning a flip with eights against the queen-jack of Caridad. Five-four then got there against ace-deuce to felt Nugent next and Anatoly “Mr_Deer” Filatov lost a flip with ace-king against the fives of Dvoress as well.

Just like that the tournament was down to the final two players, both guaranteed a seven-figure payday and De Almeida had laddered up thanks to the efforts of fellow Natural8 player Dvoress. The heads-up duel was very short-lived as the overwhelming lead of the Canadian culminated in the second hand when king-queen prevailed against king-eight suited. 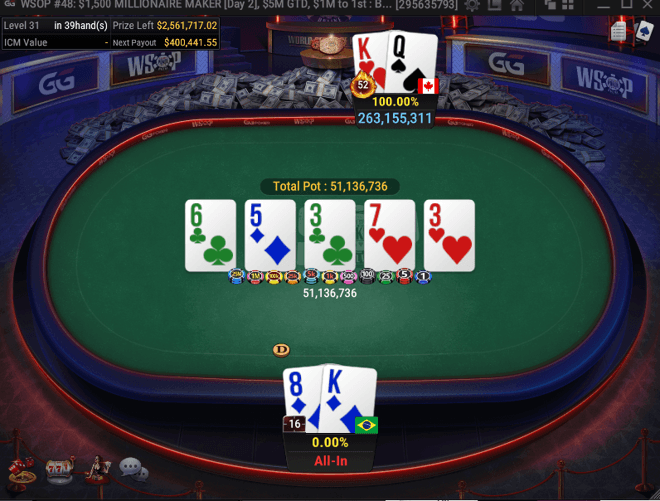 De Almeida certainly didn’t mind, as he was railed by his brother and certainly a lot of Brazilians on his road to a huge payday of $1,072,428. For Dvoress, the winning amount of $1,489,289 might not be out of the ordinary as he’s regularly competed in the highest buy-ins of the international poker circuit throughout the last few years. However, the unlikely chance at a WSOP gold bracelet came true during a time he would usually spend away from the felt in order to relax in nature and stock up on energy for the rest of the yearly poker grind.

Dvoress also became the fifth player during the WSOP 2020 Online Bracelet Events on the GGnetwork to win a title on Natural8 and has earned a spot in Team Bling. It comes with a $15,000 sponsorship by Natural8 thanks to the exclusive Winner’s Circle promotion.