Three more champions walked away with gold bracelets this week, leading up to the third Super Sunday of the World Series of Poker Online 2020 on GGNetwork. While Event #41: $400 COLOSSUS and Event #42: $400 PLOSSUS saw their final players return after six days off (to an exciting live stream with commentary and hole cards displayed), Event #46: $500 Deepstack NLHE managed to whittle down their massive field to a winner on the same day.

Two years ago, Ranno Sootla went heads-up against Ryan Leng for poker’s most elusive prize in Las Vegas: the gold bracelet in Event #51 $1,500 No Limit Hold’em – Bounty. Back then, it wasn’t meant to be as he finished runner-up and claimed a then career-best payday of $168,464.

Fast forward to the 2020 WSOP Online Bracelet Events, and Sootla once again reached the final table in Event #41: $400 COLOSSUS. There was huge field of 12,575 players, all playing for the lion’s share of $4,796,632 in prize money. The Estonian entered the final table in the middle of the pack, and had to battle against the likes of Ajay Chabra (9th place), Natural8 player Tom “pik00rs” Delaine (7th place), Arunas Sapitavicius (5th place) and Joni Jouhkimainen (3rd place).

Greece’s Paraskevas Tsokaridis was responsible for half of the eliminations and ensured that the final table wrapped up in just one-and-a-half hours, as he entered heads-up against Sootla with a two-to-one lead. However it was then time for Sootla to shine, as he won 12 of the first 15 hands in heads-up to take the lead. Tsokaridis eventually came up short with ace-nine against pocket kings. His consolation prize of $433,345 is by no means a shabby one however, considering it came from an initial investment of $400.

This redemption for Sootla, who earned $595,930 and a $15,000 WSOP Europe Package, was made sweeter by bringing his home country of Estonia onto the WSOP gold bracelet scoreboard. 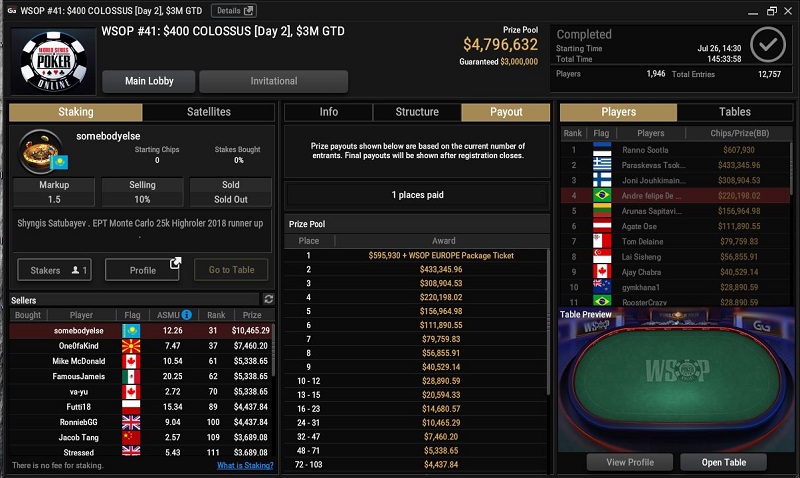 Last year, the Brazilian rail at the WSOP in Las Vegas had reason to celebrate when Yuri Dzivielevski triumphed in WSOP Event #51: $2,500 Mixed Omaha Hi-Lo 8 or Better, Seven Card Stud Hi-Lo 8 or Better, earning him his first WSOP bracelet and a top prize of $213,750. He made that two in as many years, after also taking down this year’s Event #42: $400 PLOSSUS.

The final nine players out of 4,356 entries returned to the final table, which was streamed with commentary and hole cards on a security delay. They played for the lion’s share of the $1,637,856 prize pool with Dzivievelski holding the lead. First casualties were the North Americans: Marcus Cara, Dustin Dirksen and Chad Layne, followed by Mexico’s Juan Perez.

A roller coaster ride followed as Samuel Bernabeu, Gaby Livshitz and Tautvydas Jokubauskas hit the rail, setting up the duel for the WSOP bracelet between Dvizielevski and Matt Vengrin. Dvizielevski had a commanding lead and when both flopped top pair, the chips went in but Vengrin had to settle for the runner-up spot and $165,147.

For Dzivielevski, who now has more than $7 million in online cashes and $1.2 million in live cashes, the victory came with a payday of $221,557 and an added WSOP Europe package valued at $15,000. 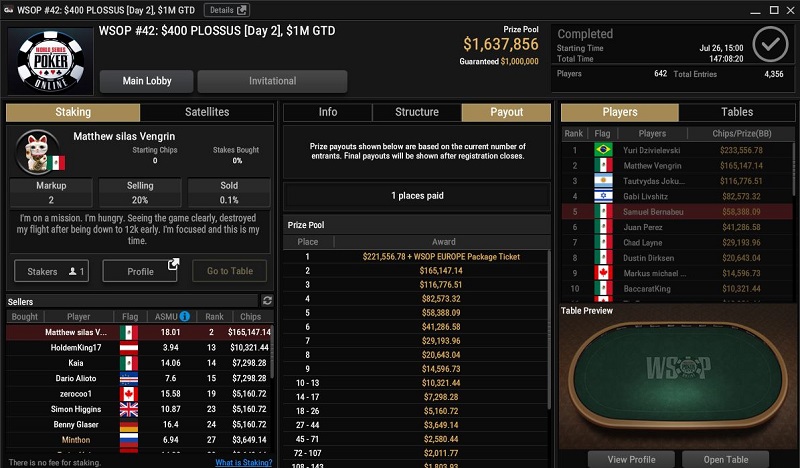 The third event of the day took a tad over 11 hours from start to finish, and it was Sung Joo “ArtePokerTV” Hyun who claimed his maiden WSOP bracelet in Event #46: $500 Deepstack NLHE. A total of 2,307 entries ensured a prize pool of $1,095,825, and with levels of 20 minutes there were barely any moments without eliminations or double-ups until the final table was set.

Russia’s Nikita Kuznetsov would have started the showdown of the last nine players with a bang in the second hand if he had called three all-ins with ace-king suited. However he folded to see pocket sevens clash with ace-queen and queens, which sent Yesha Punjabi to the rail and vaulted Canada’s Jeffrey Mallach into the second-biggest stack.

One short stack after another succumbed as Wei Zhao, Jens Kerper, Che Li Lin and Yu Du all ran out of chips in a matter of minutes. In a battle of the two biggest stacks, Kuznetsov could not fold top two pair against the set of Mallach, who took a commanding lead. The misery in showdowns continued for Kuznetsov, who eventually bowed out in 4th place.

Down to the final three players, Mallach was in a prime spot to claim 80% of the chips in play when his aces clashed with the kings of Yiduo Yu. However, Yu pulled a rabbit out of the hat with running spades for a four-card flush. The double ups were traded back and forth from there, and Mallach lost two further all-in showdowns against Yu to become the third-place finisher for a payday of $83,696.

Heads-up play lasted for half a dozen hands as Yu was caught bluffing with ace-high and Hyun closed it out shortly after to become the third WSOP bracelet winner for South Korea. He received $161,898 for his efforts, his second-biggest cash after finishing 4th in 2018’s Event #68: $1,000+111 The Little One for One Drop. 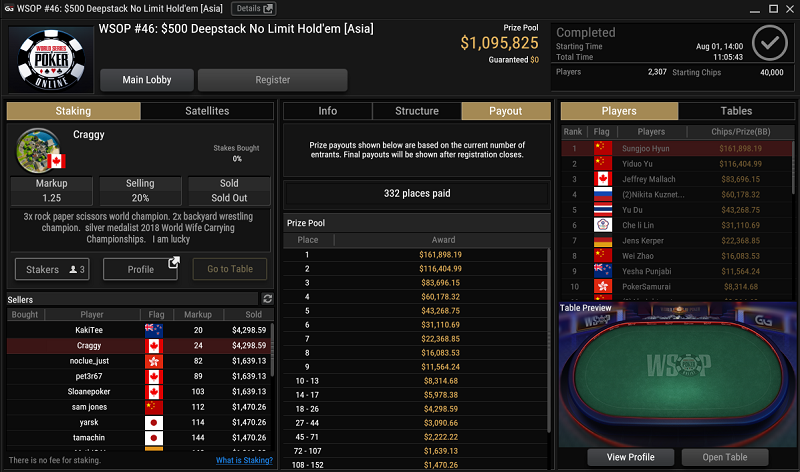 Natural8 is offering its players an exclusive WSOP 2020 offer with the Winner’s Circle promotion. As part of this promo, players who win a gold bracelet will also get the opportunity to become ambassadors for Natural8 in the newly-created Team Bling. A Natural8 player who goes on to win the WSOP Main Event will become captain of Team Bling, as well as walk away with a massive $100,000 in live event and online sponsorships. Remember, these sponsorships are only available to Natural8 players!