Three champions have been crowned in as many days from August 4th - 6th in the World Series of Poker Online 2020 bracelet events. Alongside the MILLIONAIRE MAKER final table, another Pot Limit Omaha winner was found, and the 128-entry bracket of the Heads-Up Championship has been whittled down to its final four contenders.

The first tournament in the week to award a coveted gold bracelet was Event #50: $2,100 NLHE Bounty Championship where a total of 1,168 entries contributed to a prize pool of $2,336,000. Especially in the late stages, the progressive knockout format played a pivotal role to dominate the action as each bustout came with a serious payday.

On the road to the money, the likes of Daniel Negreanu, Simon Higgins and Martin Pineiro all came up short. Natural8 ambassador Pete Chen secured a min cash, and the same applied for Mike McDonald and Ajay Chabra. Online poker streamer Parker Talbot made the first pay jump but also ran out of steam.

Further big names such as Juha Helppi, Bertrand “ElkY” Grospellier and Ami Barer fell short of the final table while Alex Difelice became the 10th place finisher when his combo draw failed to get there against the set of Enrico Camosci. The young Italian, friends with superstars such as Mustapha Kanit and Dario Sammartino, took the lead in the final showdown and eventually won his first bracelet along with $327,319 for his efforts. 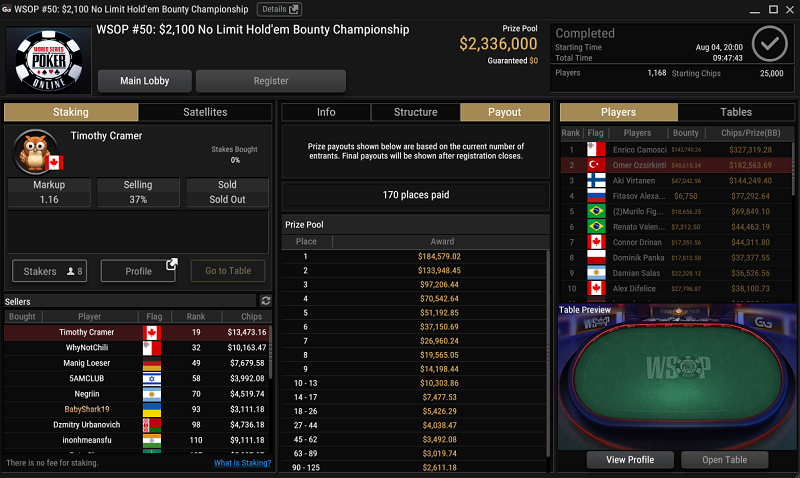 Well-known pros such as Damian Salas, Dominik Panka and Connor Drinan all bowed out to pave the way for Camosci, who never really surrendered the top spot. While he only knocked out three of the finalists, they all came with hefty bounty prizes and the $142,740 bounty portion of Camosci was bigger than second-place Omer Ozsirkintis’ cash prize and nearly as big as third-place Aki Virtanen’s total prize.

In a rare feat for a father-and-son duo on the international poker circuit, Eoghan O’Dea has followed in the footsteps of his father Donnacha “The Don” O’Dea and claimed his first WSOP gold bracelet in Event #51: $400 Pot Limit Omaha. Only Doyle and Todd Brunson have achieved this before. O’Dea overcame a big field of 2,005 entries to claim the lion’s share of the $753,880 prize pool.

It was a long time coming for O’Dea as he had previously reached the final table of the WSOP Main Event in 2017 and finished 6th in the $10,000 PLO Championship 2019, as well as notched several other cashes in the mixed game variant. This time, however, the Irishman was not to be denied after finally coming out on top of a final table that also featured Spanish race car driver Daniel Juncadella, Ruslan Nazarenko and Jarred Solomon.

Once the field combined to one table, O’Dea was in the middle of the pack and doubled through Juncadella with aces versus aces as he also held sevens and those flopped a set. From there on, Canada’s Nital Jethalal dominated the action, but O’Dea jumped into the lead after busting Chi Chung Ho and Benjamin Voreland. 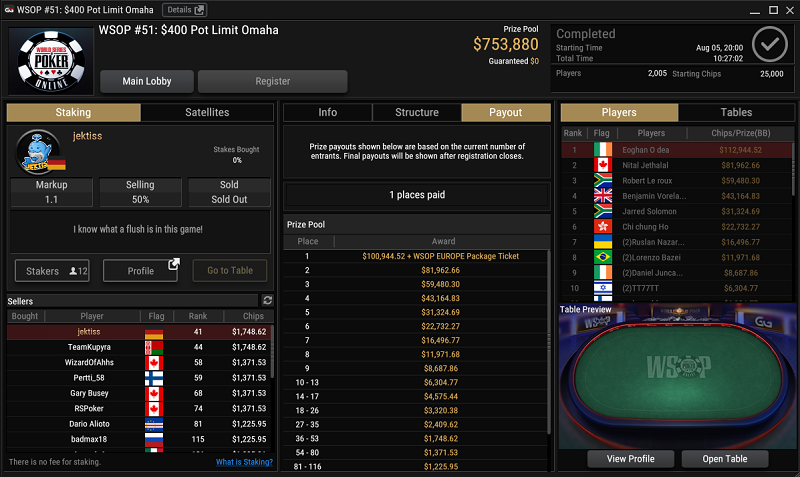 It was over soon after, as O’Dea also dispatched his final two opponents. Robert Le Roux found no overcards to pocket queens and a top set of aces, then held against bottom two pair and a straight draw as Jethalal had to settle for the runner-up spot. For O’Dea, the victory came with a payday of $100,945 and a package for the WSOP Europe.

The first two-time champion of the festival on GGNetwork has been crowned, and it was Canada’s Alek Stasiak who emerged victorious once more. Stasiak topped a big field in Event #33: $1,111 Every 1 for Covid Relief [Caesars Cares] and followed that up with his second win in Event #52: $1,000 NLHE after defeating a field of 2,006 entries.

Once the final 278 players were in the money, big names such as Mohsin Charania, Chris Moorman, Ryan Riess, David Peters, and recent two-time WSOP bracelet winner Yuri Dzivielevski all headed to the payout desk. Four hours after the paid places were reached, they were already down to the final table.

Notables such as Jimmy Guerrero and Vincas Tamasauskas made the cut but were gone by the time the heads-up between Kunal Bhatia and Stasiak was set, with the latter holding 70% of the chips in play. Bhatia claimed the lead from Stasiak but was unable to hold onto it. He eventually got it in with ace-four and Stasiak called with king-queen to improve on the river. 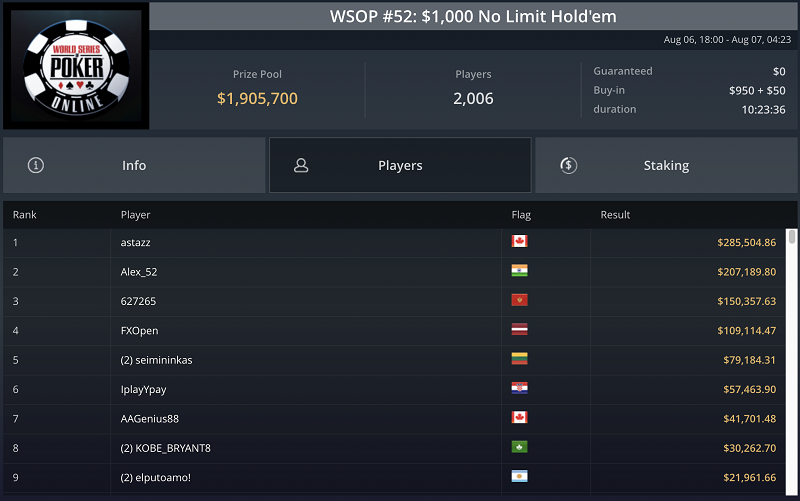 The second victory of this player from Quebec comes with a payday of $273,505 and he will also receive a package for the WSOP Europe. Thanks to the points accumulated so far, Stasiak currently sits in second place in the overall leaderboard at half time for the WSOP Online 2020.

The second Pot Limit Omaha tournament within a few weeks saw several former champions of the festival take a chance at the coveted gold bracelet. However, none of them came close to the final table in a field of 831 entries, which created a prize pool of $631,560. 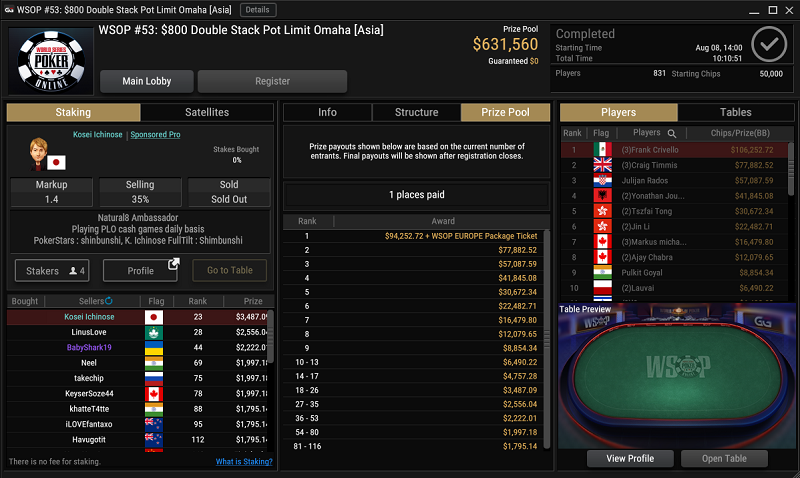 Six-time WSOP bracelet winner Daniel Negreanu cashed once more but was one of the first casualties in the money alongside Kahle Burns, Aku Joentausta and Adrian Buckley. Many other notables made it further including Erik Seidel, Connor Drinan, Anton Morgenstern, Manig Loeser and Mohsin Charania but they also failed to earn a seat at the final table.

The action on the final table was frantic with frequent all-in showdowns every other hand. Responsible for most of them was the UK’s Craig Timmis, who already had a third-place finish in Event #37: $1,050 Bounty Pot Limit Omaha to his name.

As the short stacks bowed out one after the other, it was all about Timmis, Julijan Rados, and Frank Crivello, who ended up in the top three spots. Timmis lost a huge pot for most of the chips in play when his pair and nut flush draw could not crack aces, but he came back and it was Rados that had to settle for third place.

A short-lived heads-up saw Timmis all in for more than 30 blinds preflop with sixes and deuces. Crivello called with kings and the higher set of the American held up. Timmis scored $77,883 for his bankroll and Crivello walked away the winner of Event #53: $800 Double Stack Pot Limit Omaha, a payday of $94,253 and a package for the WSOP Europe.

The highly anticipated Event #54: $10,000 Heads-Up Championship attracted some of the biggest names of the international poker circuit, and they were joined by online grinders and heads-up specialists. 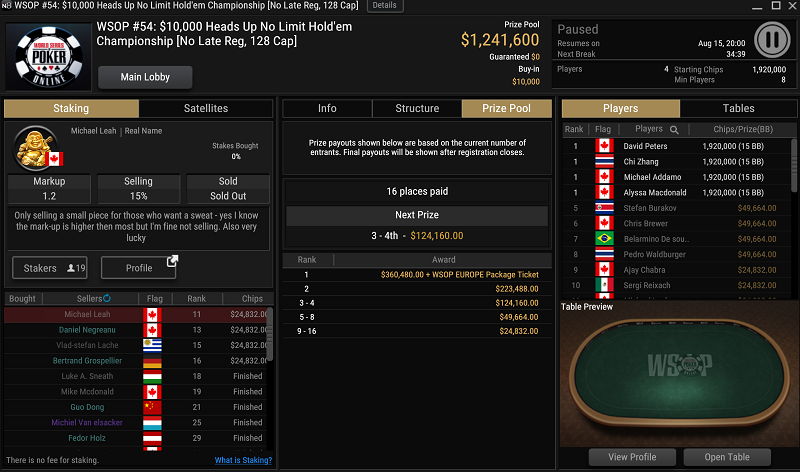 Poker fans from all over the world could watch the duels in the client with real names showing and the first tournament day whittled down the bracket of 128 entries to the final four contenders. The top 16 spots were paid which meant that three heads-up had to be won in order to earn a portion of the $1,241,600 prize pool.

Fortune was not on the side of Natural8 ambassadors Pete Chen, Danny Tang, Thai Ha and Michael Soyza who all bowed out before the round of last 16. Daniel Negreanu, Samuel Vousden, Bertrand “ElkY” Grospellier and Mike Leah were among those to settle for a min cash.

One more round was played and Canadian online poker streamer Alyssa MacDonald defeated Brazil’s Belarmino De Souza to punch her ticket for the semifinal. Michael Addamo and Chi Zhang made quick work of their opponents as well, and these two Natural8 players will meet in the penultimate round. The last player to advance was David Peters who will face MacDonald in the other semifinal.

As Natural8 players, Addamo and Zhang also stand a chance to win a $15,000 sponsorship if they go on to win the bracelet. As part of the Winner’s Circle promotion, Natural8 players who win a gold bracelet in the WSOP Online 2020 will also net a Las Vegas package (worth between $7,500 to $15,000), as well as represent Natural8 in the WSOP-exclusive Team Bling.

The tournament is now on break until the following Saturday when the remaining three duels will be broadcasted with cards-up coverage and commentary until the next WSOP bracelet winner is crowned. Addamo has two already and Peters one, and a top prize of $360,480 is reserved for the eventual champion.