All New Fish Buffet and More!

1) Introduction of Black Ranks You can now choose to receive weekly rewards at a fixed cashback rate. Simply switch to the newly-introduced Black Ranks!

2) Maximum Rewards Increased The highest rank is now Black Shark, which offers a fixed 60% cashback, up from an average of 50% previously.

With the update happening on 9 Sep, your Fish Points will be reset to 0 with existing points converted to their cash value and automatically added to your balance.

And not to worry, if you’re one of the players who prefer climbing up the ranks, the classic Fish Buffet system is not going anywhere! If you’re wondering whether you should stick to the classic system or try something new, we’re here to help!

Stick with Classic Fish Buffet if:

Switch to a Black Rank if:

No matter which you choose, we’re sure you’ll make full use of this rewards programme! 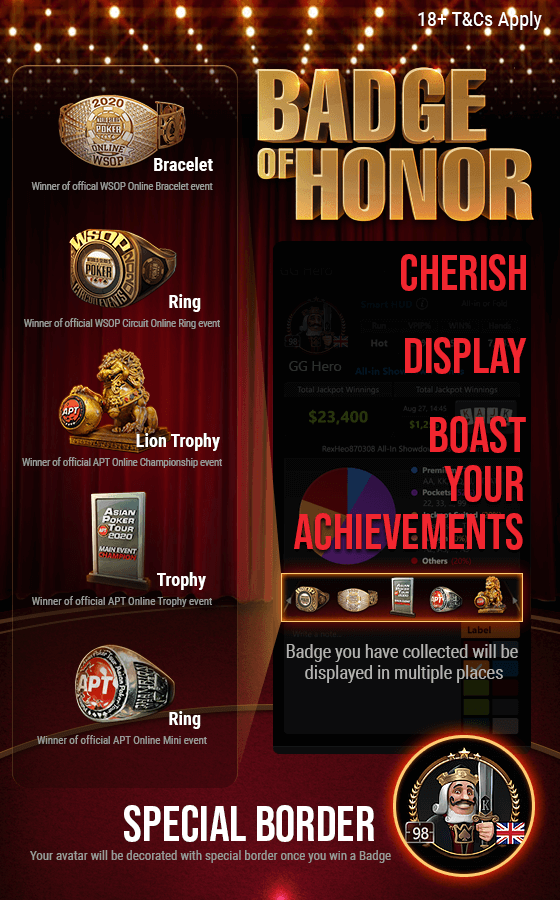 Tournament Achievement Badges will now be given to players who win specific tournaments, including the WSOP Ring Events, WSOP Bracelet Events, APT Trophy Events and more to come. Badges will also be shown in your Avatar Frame so you can truly show off in style!

The early bird really does catch the worm! Early birds in tournaments will now have a Bubble Protection or Rake Free option (either/or depending on the settings of the tournament). With the rake-free option, buy-in fee will be returned to players’ wallets.

This one is a bit more technical but will be of interest to those invested in Tournament Staking! The formula used in calculating Day 2 Staking has been adjusted to more accurately reflect players’ chips. Where previously the base price per 1% of a player’s Day 2 action was calculated by comparing the Day 2 starting chip stack with the Day 1 starting stack, now it is calculated using the Adjusted for Stack (AdjS) formula.

And finally, chatting is now available for all game types including Hold’em, Omaha, AoF, Short Deck, Rush & Cash, Spin & Gold, and Chinese Hold’em. You can also chat as an observer at the table. Time to express yourself and enjoy!

Previous Article
$3.5 Million in September Promo Giveaways on Natural8
Next Article
All About the GGMasters & MILLION$ Tournaments