This past weekend saw the first trophy events of the inaugural Asia Poker League Online Series kick off. Three champions were crowned and Event #1: 2021 Tip-Off whittled down to its nine-handed final table.

Once all starting days for the first trophy event were completed, this CN¥188 (~ $29) buy-in event had attracted a big field of 18,712 entries. Only 2,015 players managed to reach the second tournament day on Feb 7, battling for their share of the CN¥3,236,427.52 prize pool. More than half of the contenders left without anything to show for, as only the top 950 spots were guaranteed at least CN¥648.55 for their efforts.

Brazilian WSOP Winter Online Circuit ring winner Carlos “Wtfisthis” Henrique advanced as the second shortest stack of 18.7 big blinds, with fellow South American Leandro Bianchini narrowly ahead with 23.2 big blinds. Heinz “pipostinkt” Schlueter was among the shorter stacks for the restart, but made it all the way to the final table with a stack of 32.6 big blinds. 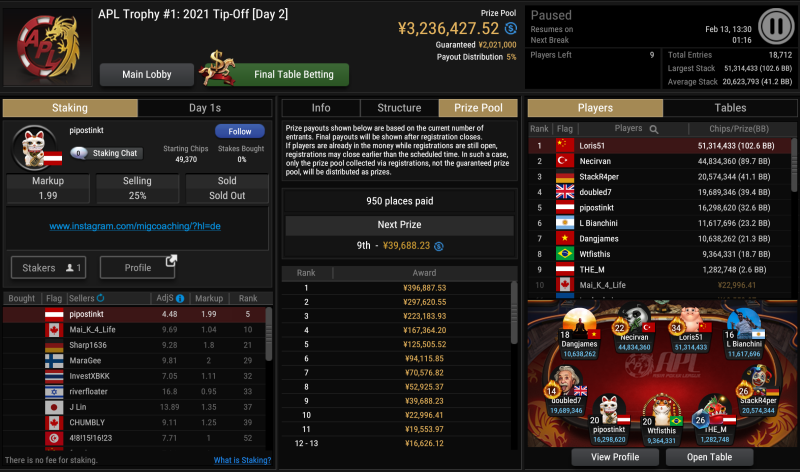 The second event of the APL Online Series saw the first Natural8 champion being crowned. Ha “HasagiVN” Nguyen claimed the trophy in Event #2: Da Nang River’s Bounty Opener. The tournament came with a buy-in of VND 1,050,000 (~ $46), with Nguyen claiming the lion’s share of the VND 2,263,000,000 prize pool. 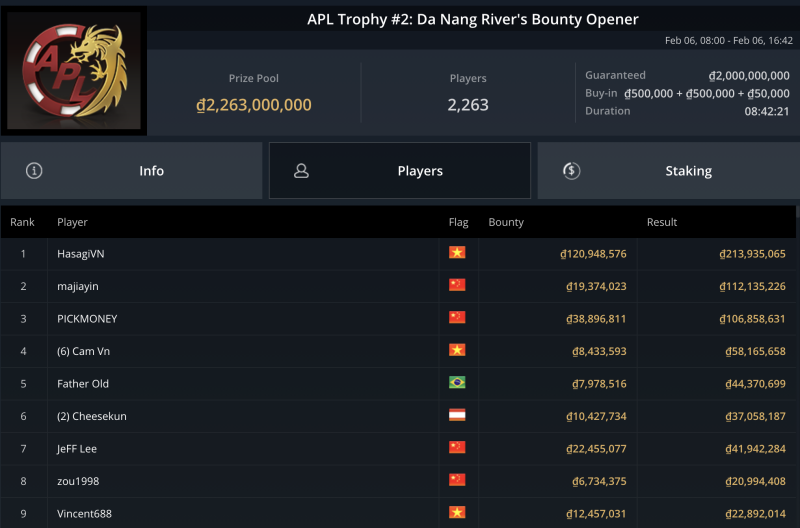 It was a busy weekend for Michiel “Easterdamnz” Van Elsacker as he not only returned for Day 2 of the Tip-Off, but also ran deep in Event #3: Hanoi Rising Dragon. This 6-Max Event with a buy-in of VND 2,200,000 surpassed its guarantee thanks to 1,656 entries.

The five remaining players then cut an ICM deal with similar prizes locked up. Canada’s “INeedMoneyy” was the chip leader at the time and busted in 3rd place. China’s Jianfeng “dajingjing” Sun earned the second-biggest prize of VND 277,305,650 (~ $12,045) and claimed the APL Jade trophy. 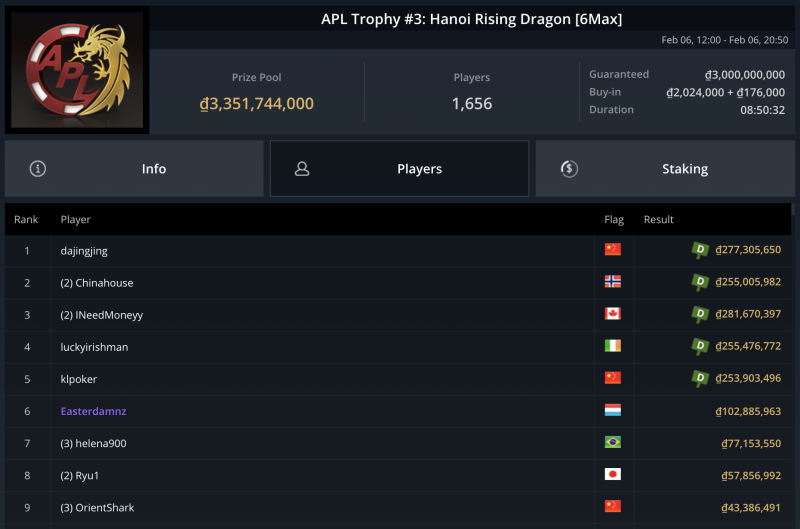 The second tournament of the festival with a Vietnamese host location was Event #4: Ho Chi Minh City Championship. With a buy-in of VND 3,300,000 (~ $143), it attracted a field of 1,335 entries to surpass its advertised guarantee on Feb 7.

The top 215 players cashed, with highlighted streamers Jinho “YellOw Hong” and Hsiang-Ju “donkeyfishy” Juan eliminated just outside of the top 100. They were joined by Sparrow “FacelessMan” Cheung. Christian Rudolph and Norway’s “Gnagelram” made it further but missed out on a top 50 finish.

Malaysia’s “burningkuku” bubbled the final table, which left five players from China in contention for the title and trophy. However, they all came up short and even “jackthewinner” could not live up to his alias. Having fired three shells, “ jackthewinner” cut a deal in heads-up with Hung “manhhungctn” Nguyen Manh to lock up VND 475,998,028. It was ultimately Nguyen who earned the trophy and the VND 476,042,907 (~$ 20,677) top prize. 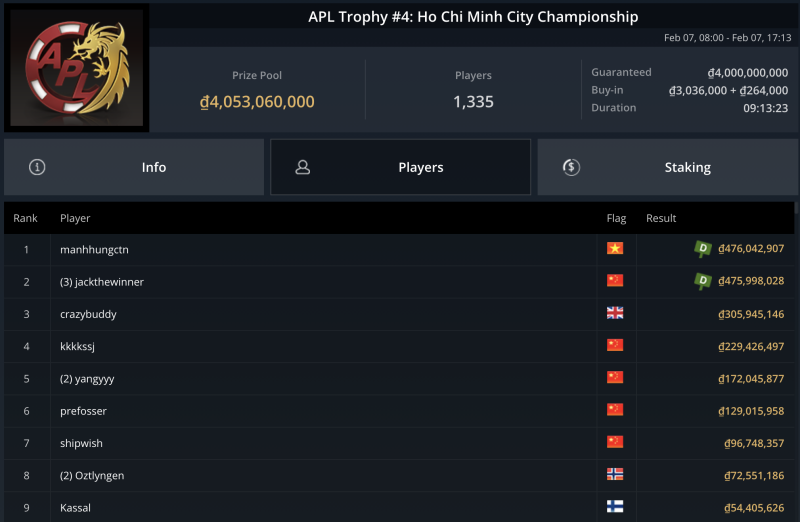 The first weekly country freerolls have also been completed. Russian players competed for CN¥20,000 in prizes, while Austria battled for CN¥30,000 as the second-strongest country. The biggest bonus slice of CN¥50,000 went to China, and it was eventually “ff51” who earned CN¥6,221.99 in a field of 853 eligible players.