Second Batch of Champions Crowned in the APL Online Series

The inaugural Asia Poker League Online Series has entered its final week, and nine champions have been crowned so far. There are still seven exclusive APL Jade trophies up for grabs and all players on the GGPoker Network (GGPN) can get in on the action.

Let’s take a look at the players who have joined the winner’s club so far, including several Natural8 players who reached the final tables. Read on as we recap the action of the past seven days!

The first of three live-streamed final tables concluded this past weekend on Feb 13. Out of a field of 18,712 entries, nine returned to battle for the APL trophy and their share of the CN¥3,236,427.52 prize pool. Contenders ranged from eight different countries.

Among the notable finalists were several players who have seen previous success on the GGPN, including Leandro Bianchini who settled for 7th place and a payout of CN¥70,576.82. Brazil’s Carlos “Wtfisthis” Henrique made it two spots further and fell in 5th place for CN¥125,505.52, followed by China’s “Loris51” who banked CN¥167,364.20. 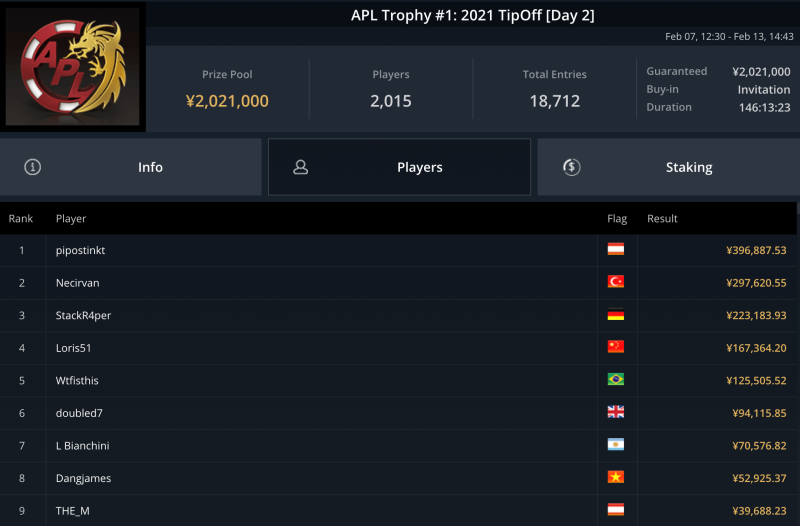 All things considered, it took fewer than seven hours to determine a champion and the tournament concluded with a three-way ICM deal. The top 179 players were paid and two hopefuls received their buy-in of T$196.83 back, thanks to the Early Bird Bubble Protection feature.

Among the notables with a deep run was Yu Chung “WNCouple” Chang, who departed in 54th place for KRW748,982 on their second bullet. Recent WSOP Winter Online Circuit winner Aleksey “ImLuckPads” Savenkov received the same payout for their 47th place finish, while Leandro Bianchini exited in 44th place.

Players from China dominated the final table line-up, with four of them in the mix. “NKSSS” succumbed in 4th place for KRW12,982,711 and what followed was a three-way deal. 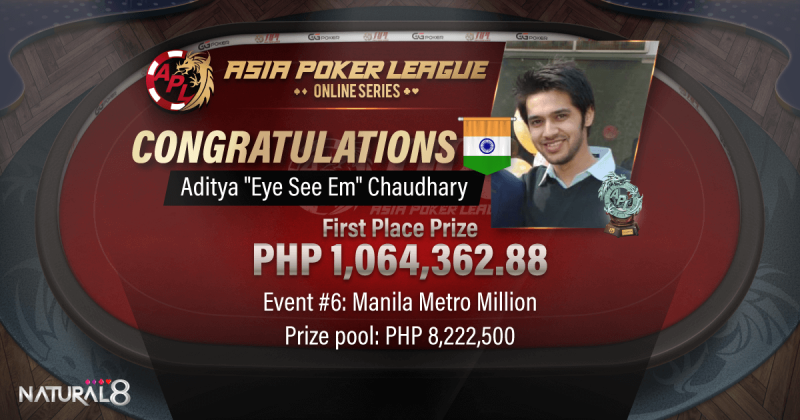 Patrick “Egption” Tardif reached the final three tables and departed in 24th place for PHP35,373.86; the same payout was awarded to Martin Pineiro in 23rd place. Jung Chou “DragonChou” Chen made it one pay jump further but had to settle for 18th place.

Three Natural8 players made it to the nine-handed final table, with the first to run out of chips being “andyparker” in 8th place (PHP141,934.80). One contender after another fell, including Rajat “Oye Como Va” Sharma in 5th place for PHP336,580.64. 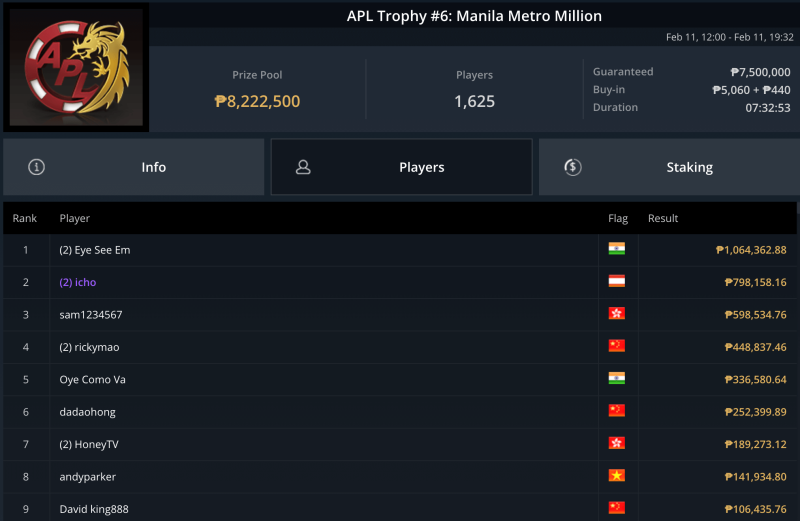 Fellow player “dakine808” was the last hope to earn the title for Hong Kong, but they too fell in 3rd place for NT$301,721.63. The final duel saw China’s “xiao2er” facing countryperson “bigwhailie” - the latter having fired five bullets in total. That turned out to be a golden decision as “bigwhailie” eventually took the event down for NT$536,547.55 (~ USD19,503). 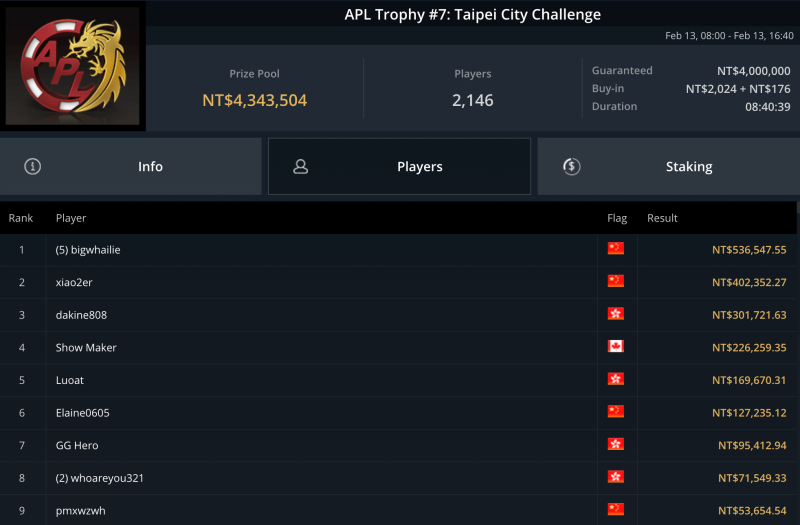 Familiar faces made it to the top 50 including Jakob “lechayim” Miegel, Christopher Puetz, Anton Yakuba, Dante Goya, Julian “Vwgunther” Menhardt, and Leandro Bianchini. All however missed out on the final table.

Natural8 player Muhammad “foldnutsjam1” Siddiqui converted his second entry into a payday of HK$98,821.23. It was an international affair thereafter, as five players from as many countries battled over the rights to an APL Jade trophy.

Argentina’s “nicocanalla” finished in 3rd place for HK$226,364.50 while Hong Kong’s “bigbear9” ended as the runner-up for HK$298,397.17. That left only one player with all the chips - Natural8 player “keiji” from Japan. They earned the top prize of HK$393,352.02 and became the third Natural8 winner throughout the first eight trophy events. 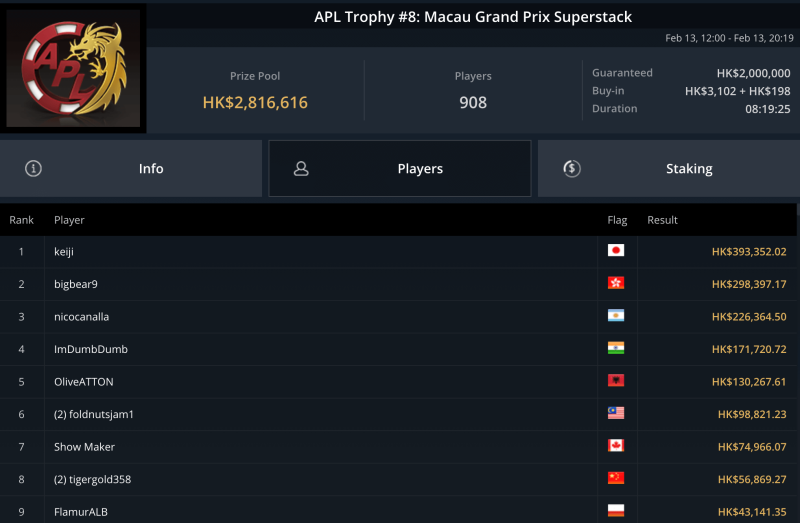 The first Trophy Event to result in a small overlay during the festival was CN¥1,100 Event #9: Shanghai Masters of Poker. The 6-Max tournament attracted a field of 1,444 entries, and the top 233 spots earned a portion of the CN¥1,500,000 guaranteed prize pool.

It took nearly nine hours to determine a champion on Feb 14. Notables that cashed included Lukas “Robin Poker” Robinson, Event #5 champion “Zakharba7tir”, streamers “donkeyfishy” and “PKBmufeng”, Guoliang “SPARK1207” Wei, Pablo Nazar, and Alexandru Papazian. “Loris51” missed out on another final table during the festival and hit the rail in 14th place for CN¥9,141,26.

Aleksandr “Hitrii999” Shevelev was among the notables that made the cut, and eventually finished in 6th place for CN¥47,129.41. Malcolm “HappyWhale” Trayner came agonizingly close to victory but had to settle for 2nd place, which came with a payday of CN¥149,036.12. In the end, it was Vietnam’s “Runnerx22” who ran the best. They collected the trophy alongside the top prize of CN¥198,744.10. 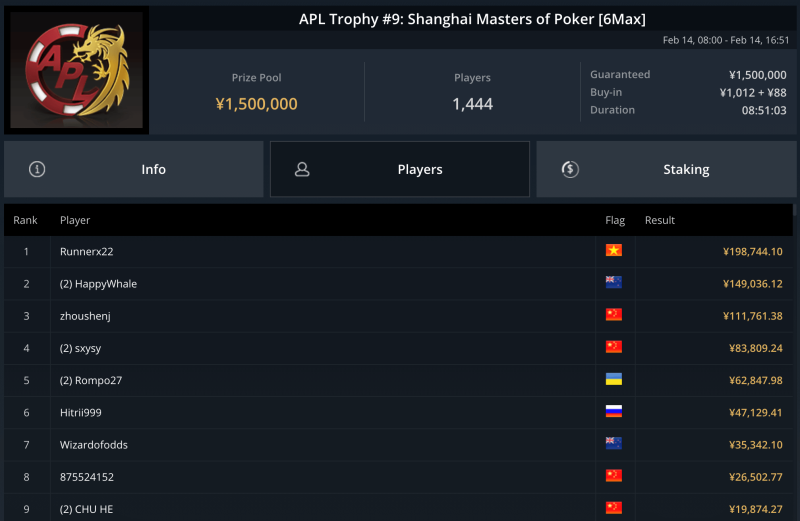 The multi-flight CN¥588 Event #10: Asia Poker League Championship is currently on break, as nine players remain. All made it through a massive field of 7,575 entries and have secured themselves a decent chunk of the CN¥4,097,772 prize pool.

WSOP bracelet winner Guoliang “SPARK1207” Wei sits in 2nd place with 54.8 big blinds, trailing only UK’s “fizzycali” who has 78.1 big blinds. Robert “robdag83” Glasspool reached yet another final table and has 25.5 big blinds at his disposal.

The tournament will play down to a winner on Feb 20. 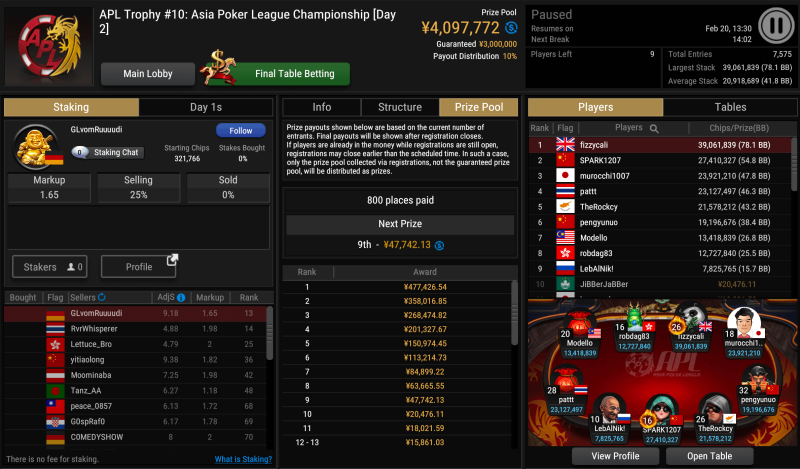 Which Tournaments Are Up Next?

It will be a busy week for the APL Online Series, with the next trophy event already underway. Event #11: Kunshan King of the Hill Bounty drew 2,057 entries, all of whom ponied up the CN¥525 buy-in.

The first starting days for the CN¥1,888 Main Event are already underway, with this flagship tournament of the festival boasting a huge CN¥10,000,000 guarantee. All Day 1 survivors will return on Feb 21 to play down to the live-streamed final table.