The inaugural Asia Poker League Online Series has all but wrapped up on the GGPoker Network (GGPN). Only one trophy remains to be awarded for the final table of the Main Event, with nine players left standing.

Let’s take a look at all the champions that have been crowned since our last update.

Three Natural8 players were in the running to win an exclusive APL Jade trophy in Event #10: Asia Poker League Championship. Out of a field of 7,575 entries, the last nine returned to the live-streamed final table. The event had missed its guarantee by a few entries, and the biggest slice of the CN¥3,000,000 prize pool was up for grabs.

Hong Kong-based Robert “robdag83” Glasspool was unfortunately the first casualty among the Natural8 contenders and had to settle for CN¥47,742.13. Malaysia’s “Modello” made it a few spots further and eventually bowed out in 6th place for a payday of CN¥113,214.73. 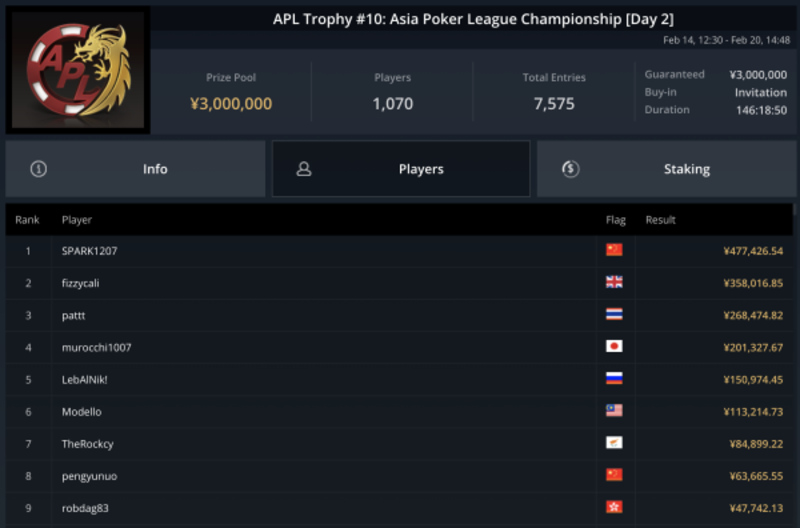 “guangtou” Takes Down Event #11: Kunshan King of the Hill Bounty

Prior to his victory in Event #10, Wei had also reached the final table in Event #11: Kunshan King of the Hill Bounty. The tournament took place on Feb 16 and the CN¥525 entry fee was paid by 2,057 entries. This ensured that the guarantee was covered and a prize pool of CN¥1,028,500 emerged.

With progressive bounties up for grabs in every hand, the action lasted all but six-and-a-half hours. Wei fired a total of six entries and made it all the way to 3rd place for a payday of CN¥44,702.35. “Roger0857” from Taiwan was right up there with five bullets and a 5th place finish worth CN¥27,461.27.

Wei’s PKO portion was higher than runner up’s “ElSiete” from Austria, who collected CN¥55,383.55. But it was yet another victory for China during the festival as “guangtou” topped it all for CN¥95,573.18 ( ~USD14,801). More than half of their total prize came from accumulated PKO bounties as well as keeping their own. 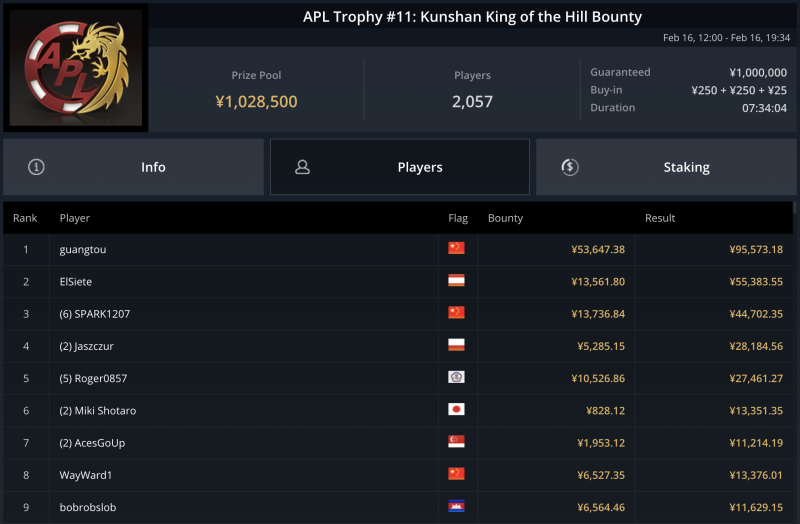 Two days later, Event #12: Xi’an Silk Road Open featured a buy-in of CN¥660. A total of 1,925 entries made sure that the guarantee was covered, and the top 323 players secured a portion of the CN¥1,168,860 prize pool. Canada’s “Moe Dalitz” earned his money back thanks to the Early Bird Bubble Protection feature, which resulted in a T$102.20 payday.

Patrick “Egption” Tardif fired four bullets and made it to 187th place for CN¥1,406.31. He was just one of a handful of featured players to cash in the event, and “sosickpl” did far better - banking CN¥3,560.22 for their 38th place finish. The final table was a very international affair as two players from China and one from Hong Kong were accompanied by many European players.

Aleksandr “leeel” Shepel was among the notable finalists, and earned CN¥26,119.70 for his efforts. “niko324” succumbed in 3rd place and banked a payday of CN¥82,597.72. That set up an all-European duel for the APL jade trophy between Maximilan “kid1591” Sanders and Ran “TheCrane” Ilan. 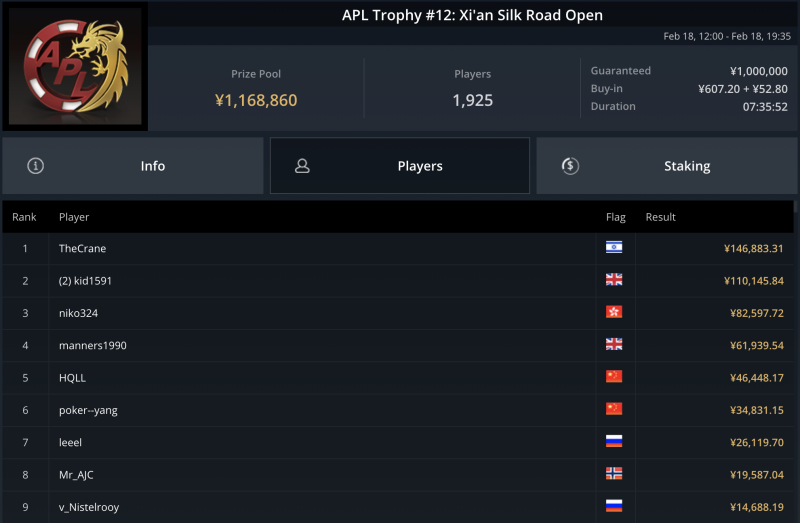 On Feb 20, two APL Trophy Events played down to a winner and both saw a small overlay emerge to provide more value to all participants.

First up was the CN¥550 Event #13: Kunming Mountain Monster Stack which narrowly missed its CN¥1,000,000 guarantee. One of the cheapest events on the schedule, it attracted a total of 1,921 entries. The top 323 spots earned at least CN¥922.76, and three players also earned their buy-in back thanks to the Early Bird Bubble Protection feature.

Featured player and Vienna resident “Q_Poker” made it to 68th place for CN¥2,336,06 while Mohaiman Ashrafee bowed out on the final two tables. Sumit “rung00se” Sapra was the final table bubble boy.

China accounted for one third of the finalists this time but their last prospect “lxm888” only managed to finish in 3rd place for CN¥62,596.19. Austria’s “AllenToDiggsTD” dug deep and fired four bullets. That paid off when they finished in 2nd place for CN¥82,842.88. Malaysia’s “VAU VAU” ended up being the top dog - earning the trophy, bragging rights and a CN¥134,535.98 payday.

Only the top 305 finishers earned at least CN¥1,913.98 and more than ten times that amount was awarded to everyone who made it to the final table. Five players from China were aiming to claim another title, and two made it to the podium. 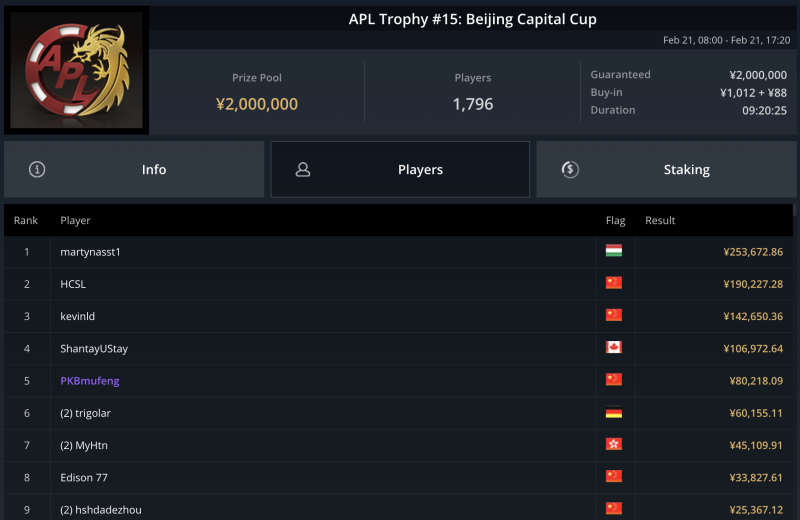 Bert Stevens, Andrii “Babyshark19” Kozlenko, Bernhard Haider, Christopher Puetz, Mikhail Semin, Damian Salas and Jinho “Yell0w” Hong were among those who missed the cut. Leonardo Mattos busted two spots away from the money and “77city77” was crowned the bubble boy in 701st place.

Michiel “Easterdamnz” van Elsacker and Natural8 Team Hot ambassador Bryan Paris sneaked into the top 500 for a payday of CN¥5,438,94. In the top 100, notables such as Nick Maimone, Laszlo Molnar, Lukas “Robin Poker” Robinson, Daniel Dvoress and Federico Petruzzelli all hit the rail prior to the final three tables.

Jonathan “JA-S-N-G-T” Fhima made the final two tables and finished in 16th place for CN¥43,802.99. Soon after, the final table was set with the elimination of Hong Kong’s “Vaccuum86”. This secured a payday of CN¥143,106.36 for all remaining contenders, who are currently on a break until the live-streamed showdown on Feb 27.

Assad “KammyStyyle” Kamran leads the chase for the final APL jade trophy and top prize of CN¥1,431,069.77 ( ~ USD221,627). He has nearly 120 big blinds at his disposal and will have to defeat notables such as Justus “taxidriver” Held, WSOP Online bracelet winners Nicolo Molinelli and Christian Rudolph, as well as Toni “AnsuFati31” Bosch Jordana. 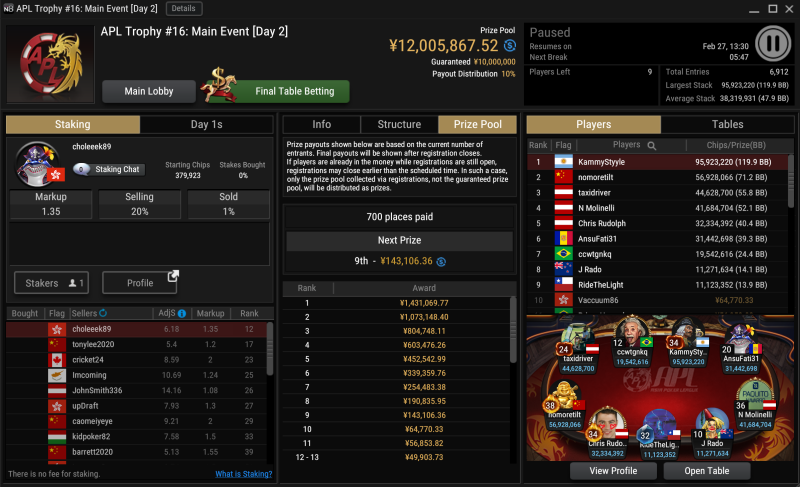 The next major festival is already around the corner as Super MILLION$ Week will be happening from Feb 28 until Mar 7. The series will offer $30 million in guarantees, across 31 high roller events.