The first-ever Asian Poker Tour Online Series has wrapped up and 12 days of poker action have come to an end, during which 62 champions have been crowned on Natural8.com. On the final day of the festival, the $800 Championships came to a thrilling conclusion and a familiar face of the Asia-Pacific poker circuit emerged victorious in the flagship tournament.

More than $1.5 million in guaranteed prizes were up for grabs but that number grew to $4,114,227.50  as the festival gathered 18,555 in total entries which has been a smashing success across the board. May 10th, 2020, also marked the conclusion of the $800 Championship Event and Michael “DirtyDuck” Falcon claimed the single-biggest prize of the festival for $97,444.51. 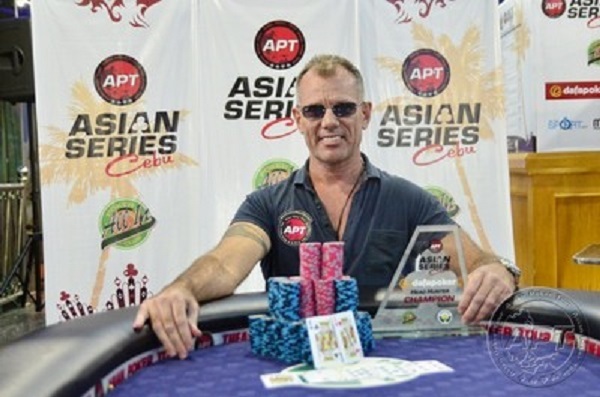 Falcon is no stranger to the live poker circuit in Asia and the Danish expat has cashed for more than $300,000 already. It is the biggest score of his career and he also joined five other players throughout the festival to take down two tournaments, which eventually boosted him to the top of the leaderboard.

A total of 753 entries emerged throughout the five starting days and that created a prize pool of $572,280. The final day saw 213 players in contention and the top 98 spots were paid. Mid-way through the day Falcon became the first player with more than a million in chips and he rode that to victory in style, knocking out six contenders on the final table itself. In the final hand, his Ace-Six suited beat the Kings of China’s “Loris51” when he turned the nut-flush to seal victory. 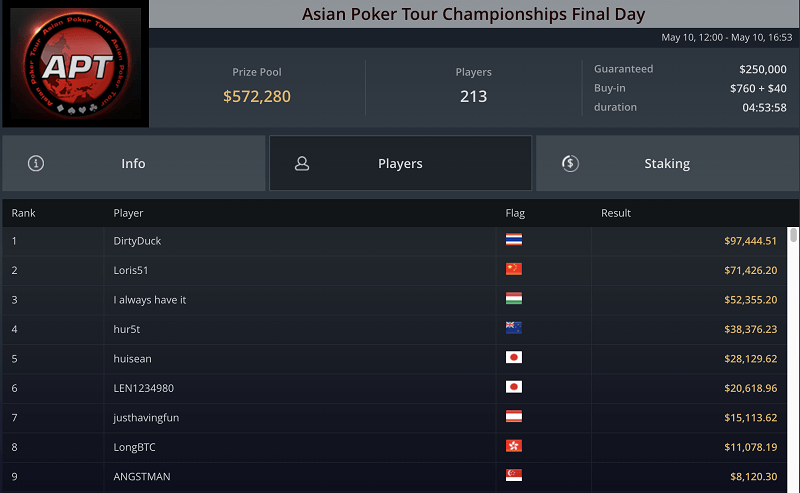 Wongwichit earned a payday of $11,687.40 in the $400 PLO Championships after beating a field of 150 entries. On the final table he turned a flush against “Shining” and “vetsforgo” to get into contention. Down to the final three, Wongwichit missed a flush-draw but rivered two-pair to dispatch “888BENYA888” from Canada in third place. He then  turned a set of fives versus two pair to eliminate Austria’s “Jeff1010” in second place. 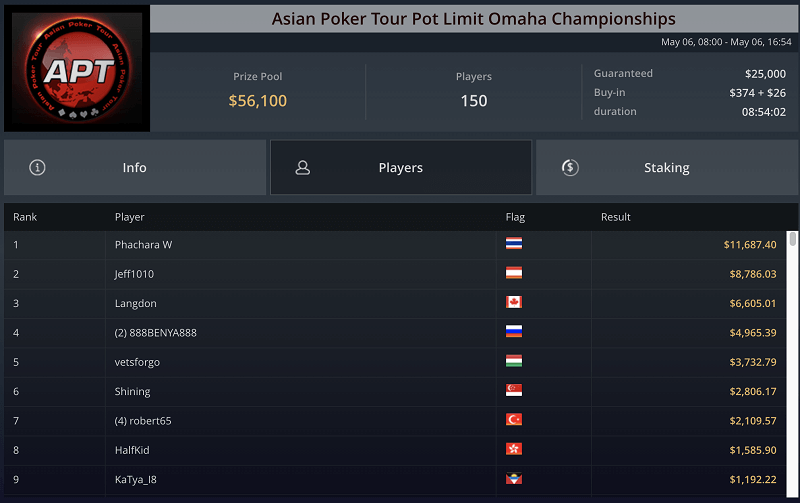 Thai Ha, who was recently announced as a new addition to the Natural8 family, reached one final table right away in Event #55 $200 Progressive Bounty and scored $1,070.95 (including $409.05 in bounties) for his 7th place finish.

Malaysia’s Paul “DingZhu88” Teoh was another notable name that earned a trophy in the late stages of the festival as he came out on top of a 132-entry strong field in the $400 Short Deck Championships . The prize pool guarantee was essentially doubled and Teoh claimed a payday of $ 10,786.14 for his efforts.

It was the second time the Dane accomplished this feat after doing so during the 2019 APT Kickoff Vietnam at the Pro Poker Club, Ho Chi Minh. New Zealand’s “putipupu”, who also won two tournaments during the APT Online Series, finished in 2nd and “Goldig” from Malaysia 3rd place respectively. Both receive an APT Player of the Series Trophy and $100.

As part of the exclusive Natural8 leaderboards, “Goldig” and Chen earned a $2,000 APT package (Ticket to a live APT event worth $1,100 + $900 cash) in the Global leaderboard. One further package was up for grabs in the regional leaderboards: “LEN1234980” won the leaderboard for Japan, “Terryboom” topped the Vietnam leaderboard and Natural8 Team Hot member Phachara Wongwichit won the Thailand leaderboard.