The APT Online Series 2nd Edition kicked off on June 14th with an ambitious $10,000,000 in guaranteed prize pools. 15 days later, it came to a thrilling conclusion on Natural8 as the final three trophies of the record-breaking festival were awarded.

While several tournaments in the series had a minor overlay (providing additional value for poker enthusiasts from all over the world), the total prize pool for this mega online series eventually surpassed its guarantee for a total of $10.9 million.

Key Numbers at a Glance

All eyes were set on the $800 APT Championships on the final Super Sunday. Attracting a field of 1,352 entries throughout 18 flights, 302 Day 1 survivors eventually battled for their share of the $1,026,760 prize pool with 188 spots eventually being paid out.

Down to the last six players, Macau-based Taiwanese poker pro Pete “TurboPete” Chen scored a vital triple up with nines and then doubled up with ace-ten suited versus ace-five suited. He had the second biggest stack among the final three when they agreed on deal numbers. The action continued as there was still the trophy and ring to be played for.

In a key hand, Chen’s six-five suited went runner-runner to the nuts in order to get maximum value from Canada’s “SpicyChknSangy” as he took over the lead for the first time on the final table. As the chips were passed back and forth, Chen fell behind but eventually knocked out Canada’s “Donsky10” with king-jack versus jack-ten to enter heads-up.

With a minor chip disadvantage, Chen went into the duel for the title, flopping top two pair and getting it in after the turn of a queen-jack high board. Chen held ahead holding queen-jack versus ace-queen suited. Another queen on the river changed nothing and that propelled the Taiwanese poker pro into a commanding lead. Shortly after, they got it in on the flop with Chen holding a flush draw against top pair and a straight draw. Instead of a spade, a queen improved Chen to the superior pair and the river bricked off. 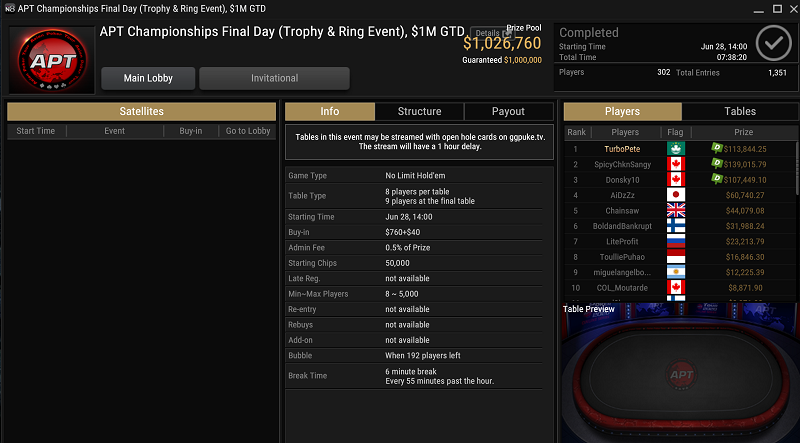 As a well-known multiple-time winner on the Asian live poker circuit, Chen now added the APT Championship Trophy and APT Championship Ring to his name, on top of the $113,844.25 cash prize. “SpicyChknSangy” went away not doing too bad themselves, with one of the biggest slices of the prize pool at $139,015.79.

It wasn’t the only final table for Chen as he also finished 8th in Event #228 $400 APT Finale for $2,061.49. The tournament drew 237 entries and more than doubled the guarantee for a prize pool of $89,112. Canada’s “HannibalBarca” was the overwhelming chip leader with five players remaining, with “DanBiz” from Poland pulling ahead before losing deuces to nines and king-deuce to fives. HannibalBarca walked away with the top prize of $17,106.93.

The penultimate tournament to award a trophy was the $400 APT Short Deck Championships which saw 143 entries, boosting the prize pool to $53,768. The top 20 spots were paid, with Mikita Badziakouski and Andjelko Andrejevic earning the min cash of $859.11. Paul “DingZhu88” Teoh reached the nine-handed final table, with the Malaysian earning $1,262.14 for his 9th place finish.

Natural8 Team Hot member Thai Ha made it even further before seeing his run end in 6th place when his aces were cracked by the queens of “cnbmb” for the vast majority of his stack. One hand later, Ha was all in for the remaining few antes with ace-queen against the king-queen suited of Lester “mon$terDad” Edoc. A king appeared on the river to seal his fate in cruel fashion.

Malta’s “BigBallsButcher” held more chips than the other three contenders combined, after his ace-queen got there on the river to beat the ace-king of “propofol-san”. Edoc showed his folded eights which would have flopped the best of it. It eventually came down to the wire between Edoc and “BigBallsButcher”, but Edoc made trips tens against two pair to jump into the lead.

Edoc pulled further ahead when he called a big river bet with ace-seven for sevens full of eights to get shown counterfeited sixes. What followed was a display of aggression and run-good: Edoc declined deal numbers as the two-to-one chip leader and continually reduced the stack of his opponent. Ultimately, they got it in with queens versus kings as Edoc had the best of it and clinched the title, trophy and top prize of $11,089.38 as a belated birthday present. 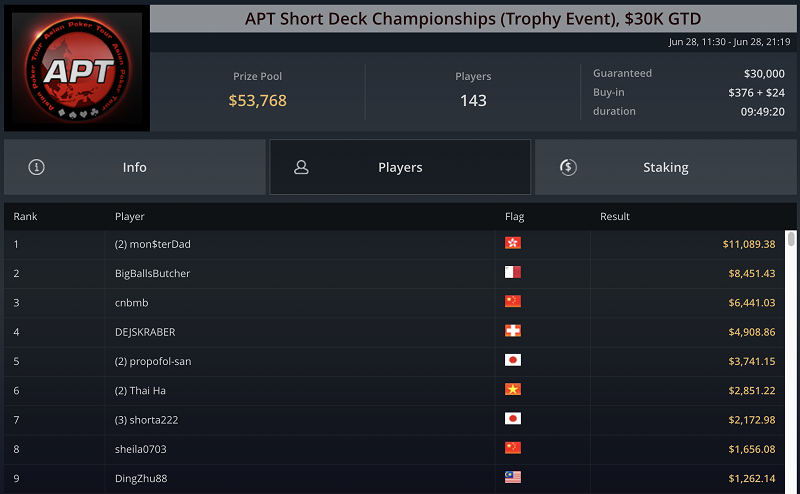 There was one more trophy left to be awarded, and it took nearly 11 hours to whittle down 221 entries to a champion in the $400 Pot Limit Omaha Championship. The guarantee was more than doubled and the top 31 players took home a share of the $83,096 prize pool. Lucas Greenwood bowed out just before the bubble, while “brix” received his buy-in back thanks to the Bubble Protection feature. Pete “TurboPete” Chen and Portuguese poker pro Joao Vieira were among those to cash.

The six-max tournament culminated in a nine-handed final table with eight different nationalities represented. Once four contenders remained, “Shining” doubled into the lead with a flopped set of fours against a pair and flushdraw of “shinerrr”, who bowed out an hour later in third place to earn $8,987.49. In heads-up it was “Shining” that prevailed against “kid1591” from the UK to take home the trophy and $16,102.16, whereas their opponent settled for a not unsubstantial $12,029.79. 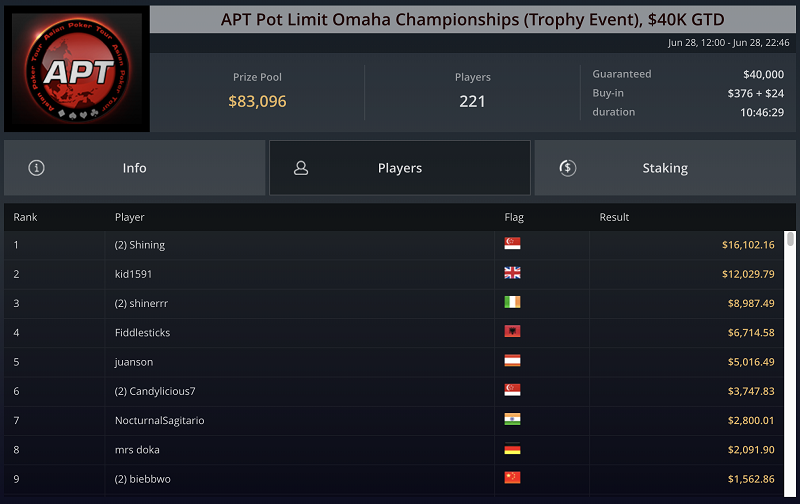 Another player with a decent Super Sunday was Malta-based French poker streamer Julien “Stroposauce” Achard-Stropoli, who played under the moniker “stroposoz”. Achard-Stropoli took down Event #225 $500 High Roller Turbo in under five hours, taking home $15,700.97. In Event #187 $200 Monster Stack, the Frenchman was among 412 players returning for the final day and eventually finished runner-up for $28,082.33. Japan’s “FRD01” emerged the champion for a hefty payday of $39,948.13.

The second-ever APT Online Series has now drawn to a close, but there’s no time to lose. The next big festival is just around the corner, with promotions and satellites galore for the upcoming World Series of Poker Online 2020.

Kicking off July 19th on Natural8, players from all over the world will have a once-in-a-lifetime chance to compete for 54 coveted WSOP gold bracelets. Sign up now on Natural8 for up to $5,000,000 in giveaways, $100 in tickets via the Welcome Bonus, and the chance to qualify directly into a bracelet event from as low as $1.08!