The Battle of Malta 2020 Has All But Wrapped Up

This past Sunday, the first ever online edition of the popular mid-stakes Battle of Malta (BOM) Online festival has concluded on the GGPoker Network (GGPN), leaving just one champion to be crowned in the $550 Main Event. Let’s have a look at the latest ring events and the key festival numbers at a glance.

Event #11 $55 Mini Main Event smashed its guarantee of $1 million, thanks to a total of 30,165 entries - consisting of 24,015 unique entries and 6,150 re-entries. 4,024 hopefuls made the cut through their respective starting days, battling for their share of the $1,526,349 prize pool. The last nine contenders then went on a five-day break prior to the final table.

All finalists had $7,090.89 locked up for their efforts, a massive ROI for such a small buy-in, and Canada’s “burrrrppp” settled for that amount. Two players from San Marino bowed out next, to leave six hopefuls from as many countries still in contention. Brazil’s Daniel “cocalatinhAA” Junior then bowed out in 4th place for $46,947.19. 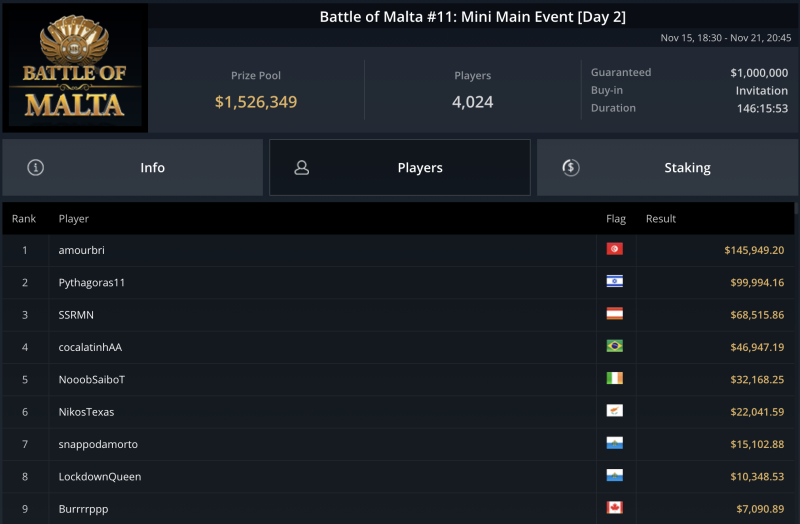 The only mid-week tournament to determine a champion was Event #12 $105 St. Julian’s Bounty Feast, which easily beat the guarantee thanks to 2,599 entries. Half of the buy-in went to the progressive knockout pool, while the remaining half was paid out as cash prizes to the top 368 finishers.

The most notable finalist was Peru’s Diego “TheProjector” Ventura, who fired three bullets and finished 3rd for $8,545.51. 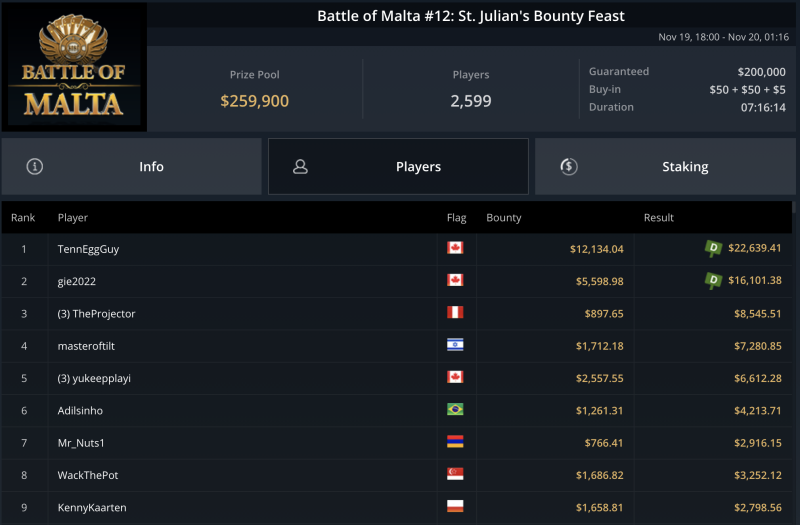 Three BOM ring events took place on the final weekend of the festival, with things kicking off in Event #13 $215 Crusader’s Cup. From a total of 1,758 entries, the top 287 finishers earned a portion of the $347,732.40 prize pool. Both Steven van Zadelhoff and Shyngis “somebodyelse” Satubayev earned their buy-in back after busting just shy of the money spots, due to the Early Bird Bubble Protection feature.

Japan’s “GACKT” and Ignacio “IgnaPoker” Molina earned the min cash of $397.16, as did Rainer Kempe. Three further featured players including Patrick “Egption” Tardif hit the rail before the final 100 were reached.

Alex Foxen bowed out in 55th place for $718.49, while Andrey “YippeeKiYay” Kalgin bubbled the final table and earned $2,688.44. The top six players all walked away with five-figure paydays. 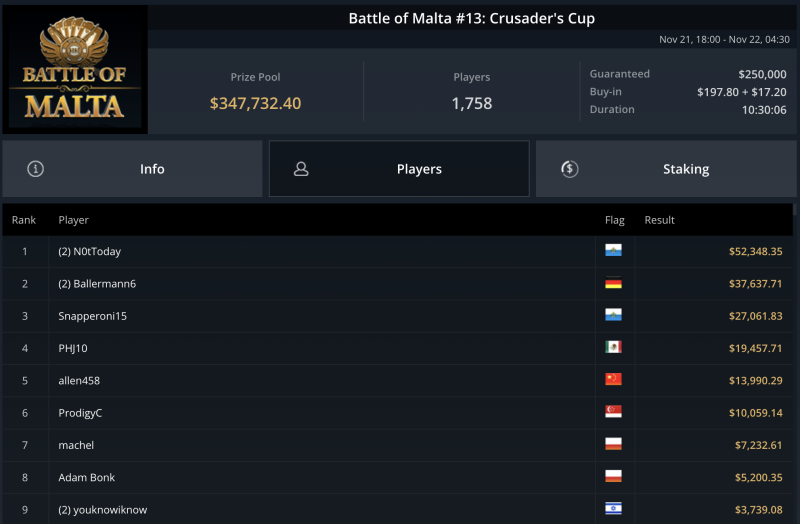 The last event to award a BOM ring was Event #15 $315 THE REVENGE, which took fewer than four-and-a-half hours to whittle down 2,011 entries to a champion. Adam “static88” Banko took home the biggest slice of the $603,300 prize pool, thanks to keeping his own bounty and eventually walked away with $65,147.32 for their efforts. 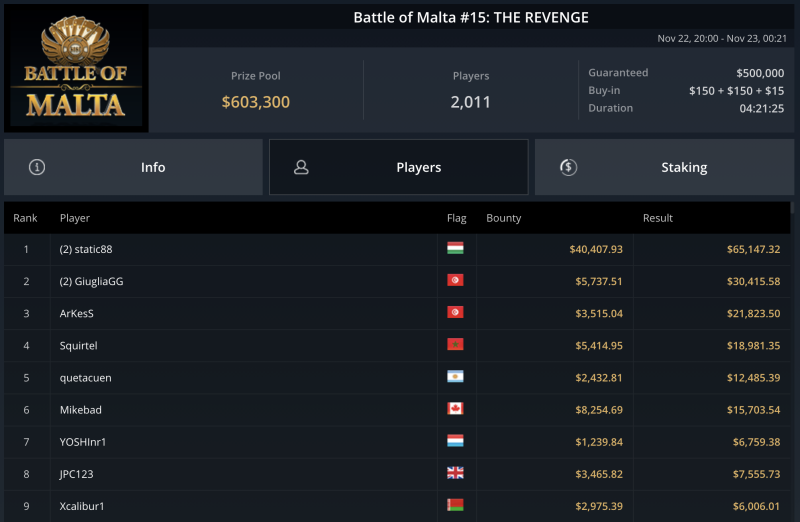 The final weekend flights of the Battle of Malta Online $550 Main Event ensured that the $3 million guarantee was smashed, as 8,789 total entries sent the prize pool up to a gigantic $4,592,252.50. All those that survived their starting days returned to their seats on Sunday to reach the top 900 spots, which paid at least $1,437.95. 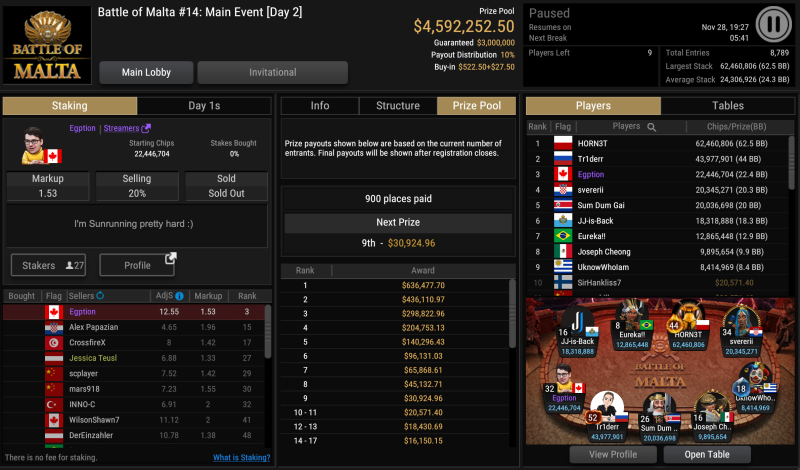 Patrick “Egption” Tardif sold 20% of his action via the Tournament Staking feature, after securing the entry in a final turbo heat on the same day. His apt description of “I’m Sunrunning pretty hard :)” was spot on, as the Canadian earned the third-biggest stack of 22 big blinds for the final table.

Fabrizio “UknowWhoIam” Gonzalez and Joseph Cheong are the two short stacks with fewer than 10 big blinds at their disposal, and have $30,924.96 locked up for the efforts.

The biggest individual payday of the festival awaits, as the top prize of $636,477.70 is reserved for the eventual champion. Randy “nanonoko” Lew and Kevin “RotterdaM” van der Kooi will be calling the action this upcoming Saturday with cards-up coverage and commentary on a 30-minute delay.

Key Numbers of the Festival

Throughout the festival on the GGPN, a total of $11.1 million in guaranteed prize pools were offered across 15 ring events. Except for Event #2 $100 Gaming Employees Championship, which never kicked off, all ring events concluded without a hitch.

Not a single ring event caused any overlay, instead more than $15.6 million in prize pools were raised. A big slice of that is still up for grabs on the final table of the $550 Main Event, which is slated to pay out the biggest individual prize of the entire festival.

The smallest event in terms of entries was the $1,200 Grandmaster High Roller, which drew a total of 403 entries and was won by Aleksei “JokerFace” Barkov. On the other side of the entry range is the $55 Mini Main Event, which drew a staggering 30,165 entries for a total prize pool of $1,526,349.