After a busy weekend wrapped up on the GGPoker Network (GGPN), nine players patiently waited for the live-streamed final table of the $10,300 Super MILLION$. The weekly high stakes showdown drew 210 entries, and among the final nine were two Natural8 High Roller regulars.

RaiseYourEdge co-founder Benjamin Rolle (also known as “Bencb789”) not only celebrated his 32nd birthday this week, but did so in style one day after scoring his biggest MTT result on Natural8 - when he came out on top against Michael Zhang.

It was already not an easy task facing some of the biggest names in poker. Rolle had the additional challenge of doing so with just six percent of the chips in play, ranking second-last in total chip count.

However, Vienna-based online poker coach Rolle immediately doubled against Andrii Novak in the very first hand. Aliaksei Boika then doubled Bert Stevens, and hit the rail one hand later when he was left with fewer than half a big blind. Novak also never recovered from the earlier setback and finished in 8th place.

Seventh-place finisher “U LOSSER” qualified for the high stakes showdown in a $100 satellite and turned that into a payday of $89,257.14. Austria’s “WatWudHaraldSDo”, who had just joined the GGPN earlier in the week, claimed the first six-digit prize of $115,752 and hit the rail in 6th place.

They were left without chips in a three-way all-in when pocket tens were no good. Rolle was all-in with king-six suited and Stevens held pocket kings. A miracle runner-runner straight saw Rolle soar towards the top.

Another 90 minutes passed before the next player hit the rail, as Stevens eventually ran out of steam with ace-nine against the pocket jacks of Nick Petrangelo. Just one hand later, Laurynas Levinskas clashed with Michael Zhang and lost a race. Levinskas doubled through Zhang for the last few blinds but handed those chips over shortly after.

Zhang also won a huge pot against Petrangelo with just one pair against a bluff, sending his opponent to crumbs. Petrangelo tripled up, then doubled up once more. However, Zhang finished the job he had started with ace-deuce versus queen-five while Petrangelo finished in 3rd place for $252,457.17.

That left the two Natural8 high rollers Zhang and Rolle in heads-up with a big 4-1 lead for the former. But the online poker coach did not admit defeat easily. In fact, he closed the gap before even taking over the lead.

Eventually with a bigger lead of his own, Rolle limped ace-six suited and Zhang pushed for 15 blinds with queen-ten. Rolle spiked top pair while Zhang had some outs with a gutshot. A queen on the turn provided some further outs, but a blank king on the river sealed Zhang’s fate in 2nd place for $327,396.30.

Rolle streamed his final table exploits on the Raise Your Edge Twitch channel and celebrated his biggest cash on Natural8 at $424,580.52. Prior to that, Rolle had already cashed three times in the Super MILLION$ with a 5th place as his best result. The biggest MTT prize until then was an 11th place finish in the WSOP Online 2020 $5,000 Main Event for $161,686. 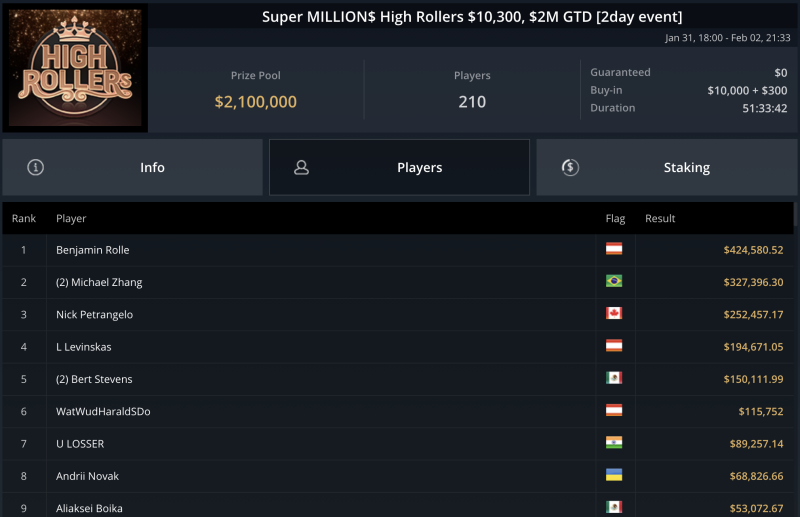