Introducing the Bounty Hunter Series with $40 Million in Guarantees

A brand new tournament series debuts on the GG Poker Network (GGPN) with the introduction of the first-ever full on poker Bounty Hunter Series, which is slated to take place from October 11th to 25th, 2020. Some 350 progressive knockout tournaments and additional side events are part of the schedule which features guaranteed prizes of $40 million. This includes special editions of the popular weekly schedule such as the Super MILLION$, the GGMasters, the Blade High Roller tournaments and the PLO High Rollers.

How exactly do the bounties work in these events?

Half of the buy-in (minus fees) goes towards the cash prize pool whereas the other half will be awarded in the bounty prize pool. The progressive knockout (PKO) format has become an increasingly popular format in online poker tournaments as it gives players the chance to earn an instant boost to their bankroll by eliminating an opponent.

Half of the initial bounty on a player’s head in a PKO will be instantly awarded to their own bankroll whereas the other half of the bounty increases the amount on their own head. As a result, successful bounty hunters will become a lucrative target for all other contenders and huge paydays will be up for grabs in the late stages of a PKO event. For example, it is not uncommon that the bounty portion of the prize is close to or even bigger than the guaranteed cash prizes on the final table.

What to look out for in the Bounty Hunter Series? 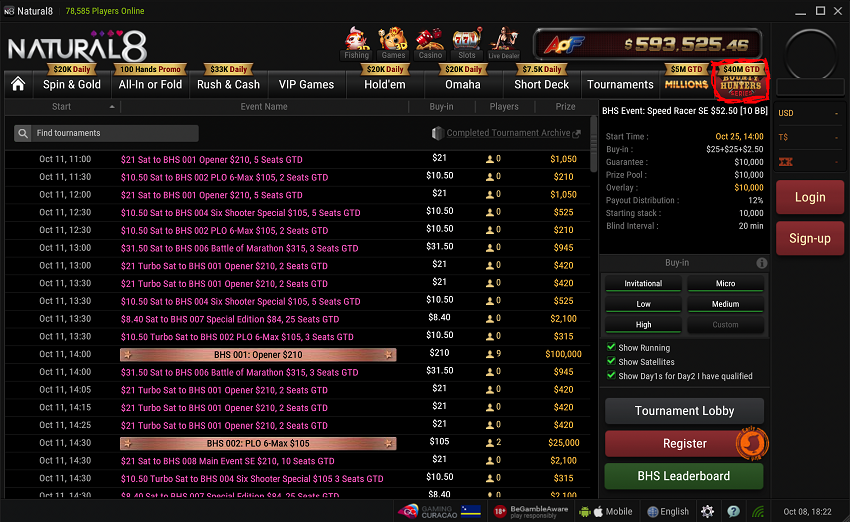 The festival kicks off with the Opener on October 11th and the $210 buy-in features a guaranteed prize pool of $100,000. Many other existing bounty events such as the Six Shooter and the Beat the Pros will be included in the schedule as Special Editions and nearly three dozen Pot-Limit Omaha tournaments will also award bounty prizes.

Each event of the Bounty Hunter Series features a guarantee with buy-ins ranging from as little as $5.25 all the way up to $10,300 in the Super MILLION$ Bounty Hunters, which boasts a guarantee of $1 million and takes place on October 11th, 18th and 25th. The rake for all of these events has been cut down to 5% and plenty of satellites are available to take a shot at glory in the middle and high stakes tournaments.

There are also “Special Edition” tournaments available for as little as $10.50 whereas the Bounty King Main Event comes with a buy-in of $315 and a guarantee of $150,000. The respective High Roller edition has a buy-in of $3,150 with the same guarantee and both are slated to take place one dozen times.

Throughout the entire festival, players can earn points towards the overall leaderboard which will award $100,000 in cash prizes to the top 100 finishers. All Bounty Hunter Series events have been deployed in the latest software update already and can be found in their own tab in the main lobby. So if you are a fan of PKO tournaments, this is the series for you.