Knocking Out the Bounty Hunters Series

The first edition of the Bounty Hunters Series on the GGPoker Network (GGPN) has concluded, and many familiar names in both the online and live poker scene recorded big scores. Let’s take a look at some of those results, along with some assorted mid-week tournaments.

Mid-Week Events in a Nutshell

In BHS 267: $3,150 Bounty King HR Main Event, 44 entries signed up and the likes of Adrian Mateos, Dietrich Fast and Idris Ambraisse all reached the final table. Ioannis Angelou Konstas finished in 2nd place for $21.073.36, while Tamas “szagos” Adamszki earned more than double that for $46,586.59 in total.

Jinho “YellOw” Hong Among Finalists in Beat the Pros

In preparation for a busy Sunday, the last Saturday session of the festival featured the BHS 313: Beat the Pros Special Edition which drew a total of 1,010 entries. Yet another featured player reached the final table, with an attempt to recreate last week’s champion Bryan Paris’ win. 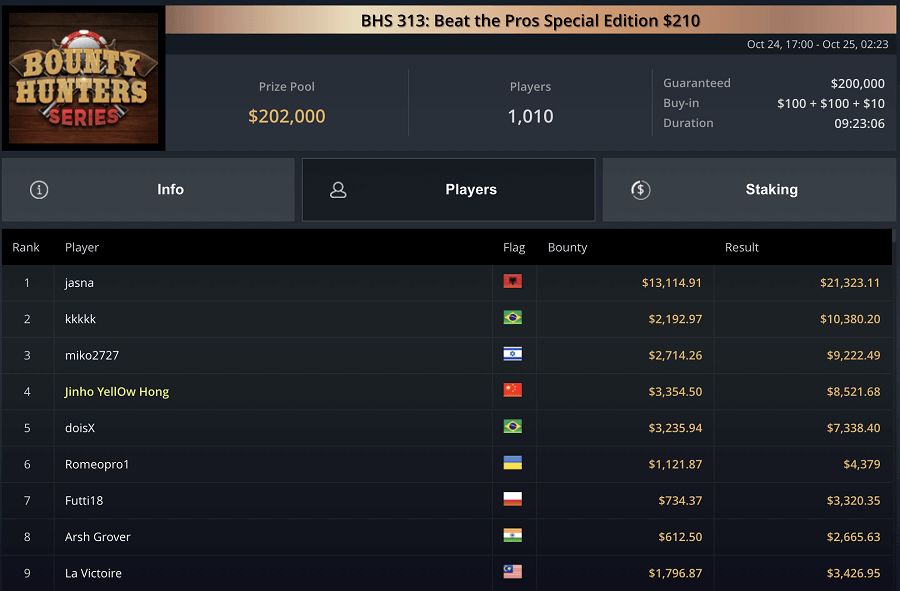 BHS 311: $525 Bounty Hunters High Roller Special Edition saw a total of 170 entries compete for $85,000 in prize money. Frenchman Idris Ambraisse continued his hot form on the GGPN with yet another victory, as he cashed for $20,165.59 total.

Sunday Specials at a Glance

In BHS 331: $315 Sunday Battle of Marathon, a field of 1,094 emerged to boost the prize pool to $328,200. Notable finalists included Mark “Beanboozled” Herm and Andreas Christoforou. Aaron “FatherFigure” Thivyanathan earned $17,565.24 for his runner-up finish, while winner Arthur “meiiYunqi” Conan earned more than double that with $35,805.26 in total.

The BHS 333: $210 Main Event Special Edition took nearly 11 hours to crown a champion in a field of 2,789 entries, as $557,800 in bounty and cash prizes were awarded. The last person standing was Estonia’s Ottomar “Decent!” Ladva, who earned $43,293.54 for their efforts. More than half the prize money came from earning knockouts and keeping the bounty.

In BHS 334: $525 Bounty High Roller SE, 800 entries resulted in a prize pool of $400,000. More than nine hours passed before the final hand was dealt. Brazil earned another BHS title as Alexandre “SexyBaldGuy” Mantovani walked away with the top prize of $41,398.76.

The Bounty editions of the $157.50 GGMasters and the $1,050 GGMasters High Rollers both surpassed their guarantee and ran for more than 12 hours in total. 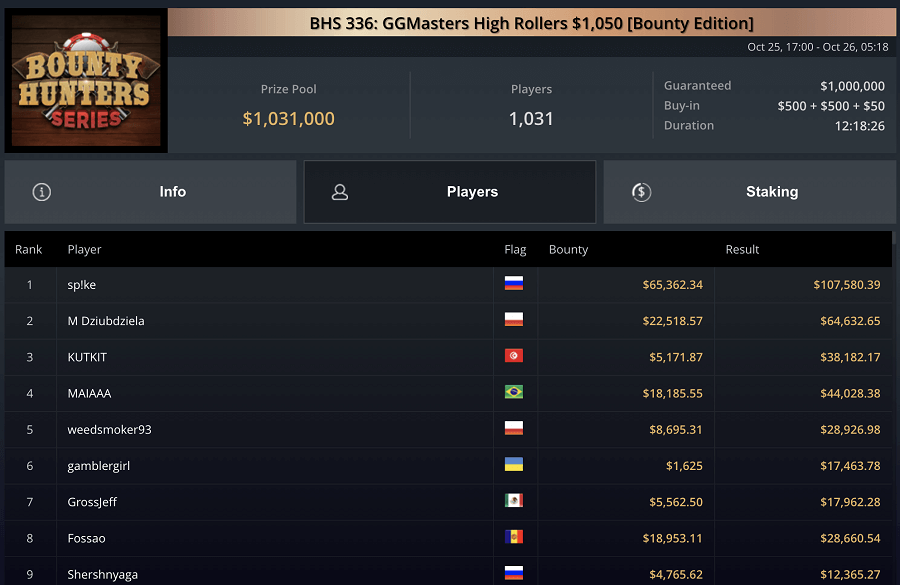 PLO Winners on the Final Weekend

The Pot Limit Omaha tournaments on the final two days of the festival were once again very popular, and several repeat winners earned another BHS badge. Among them was Adam “MikePrice82” Hendrix, who took down BHS 317: PLO $1,050 High Roller for $14,940.38 in a field of 53 entries.

Last but not least, Natural8 Team Hot ambassador Kosei Ichinose narrowly missed out on a victory in BHS 337: $2,100 PLO High Roller. Nearly one third of his $31,628.13 runner-up prize came from accumulated bounties.

Ultimately though, it was Brazil’s Yuri Dzivielevski who took the event down for $43,532.45 in total. Other notables on the final table included Sean Winter, Ami Barer, George Wolff, Maksim “KaTya_I8” Shuts and Shyngis “somebodyelse” Satubayev.

The third and final edition of the BHS 339: $10,300 Super MILLION$ Bounty Hunters drew a total of 99 entries to narrowly miss the $1,000,000 guarantee. The progressive bounty format distributed at least $2,500 for each knocked out opponent.

Kelly “saxbomb” Saxby was among the top 13 finishers who walked away with a portion of the cash prize pool, having turned a $100 satellite ticket into a total payday of $22,607.68. Aleksejs Ponakovs departed in 11th place, and GGPoker ambassador Felipe Ramos was the first casualty on the final table.

Other notables that went even further included Farid Jattin, Julian “DanBiz” Stuer, and Michael Addamo. The Aussie superstar took home $72,273.29 for his 3rd place finish, and also bagged the chip lead in the regular $10,300 Super MILLION$ edition at the same time.

In heads-up, it was once again Pascal Hartmann who notched up a victory and banked $252,439.53, leaving runner-up Isaac Haxton with a consolation prize of $135,775.98. This was the last BHS event to award a seven-figure prize pool, with some of the later Special Editions paying out five-figure paydays. 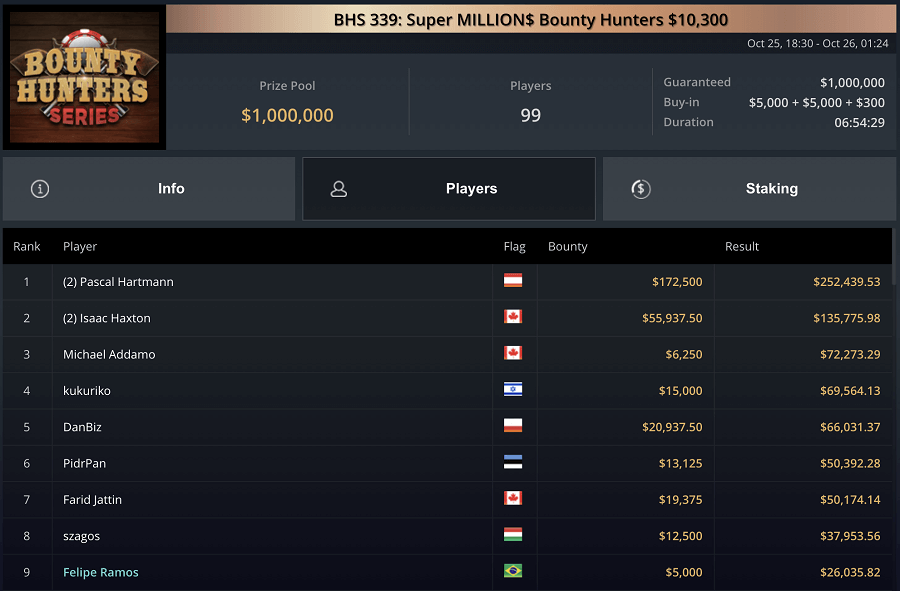 The next big festival players on Natural8 can look forward to is the Battle of Malta. Happening for the first time online, there will be $30 million in guaranteed prizes and 15 Ring events. Don’t miss Europe’s biggest poker festival, happening right here on Natural8.