The Bounty Hunters Series has completed its second week, with poker enthusiasts from all over the world walking away with four and five-figure prizes on the GGPoker Network (GGPN).

Kicking off the mid-week action on October 14th was BHS 073: $315 Battle of Marathon, which came up just short of the $100,000 guarantee as 298 players gathered on the virtual tables. Urmo “PidrPan” Velvelt and Dorian “Gladiador20” Rios were among those to reach the nine-handed final table.

It would eventually take nearly ten-and-a-half hours to crown a champion: Brazil’s Eder “BlueMoon” Campana. More than half of his total prize of $16,492.37 came from bounties.

The Bounty King Main Events still proved popular on the weekend, but attention also shifted to other regular flagship events such as Beat the Pros.

One of the first bounty tournaments to launch on GGPN, BHS 149: $210 Special Edition boasted a guarantee of $250,000. A total of 1,044 entries emerged and for the first time, two sponsored players reached the nine-handed final table.

Argentina’s Cristian Stival finished in 8th place for $3,715.24, while Natural8 Team Hot ambassador Bryan Paris went all the way. Paris fired three entries in the event and faced “Mr_3rdBullet” in heads-up, who as per his alias also coincidentally entered three times. 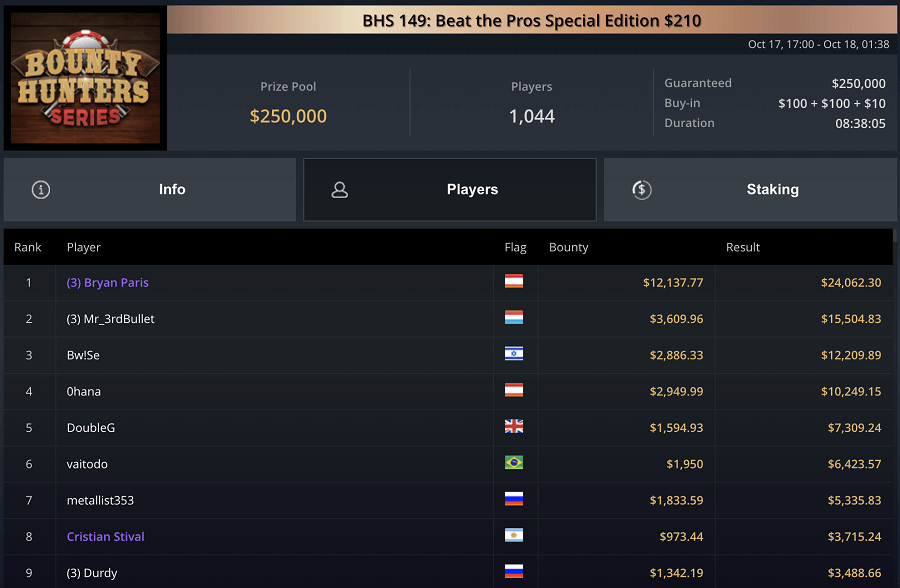 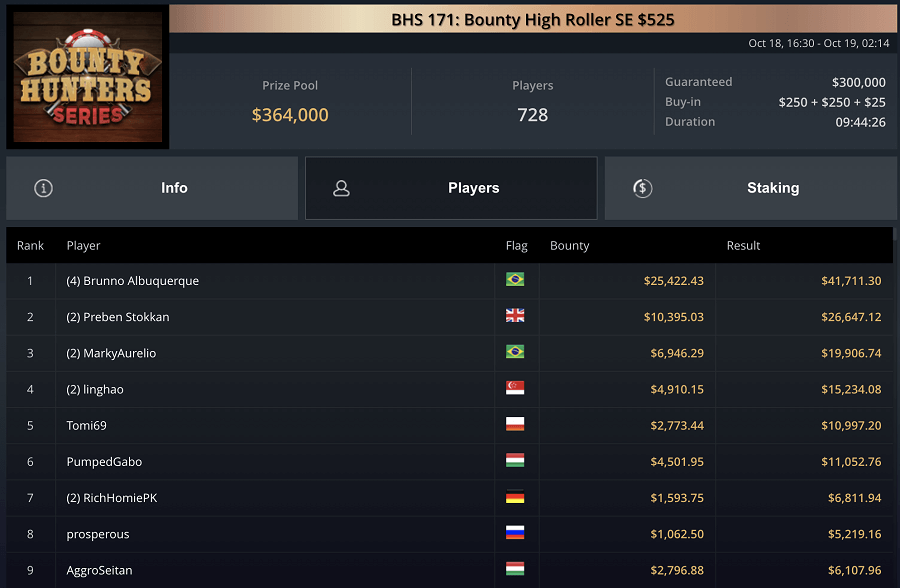 Well-known online poker pro Bert Stevens took down the high stakes edition for $231,053.76, getting past big names such as Niklas Astedt, Joao Vieira, Alexandros Kolonias, Isaac Haxton and Pascal Hartmann. Idris Ambraisse had to settle for 2nd place, which came with a consolation prize of $172,825.69. 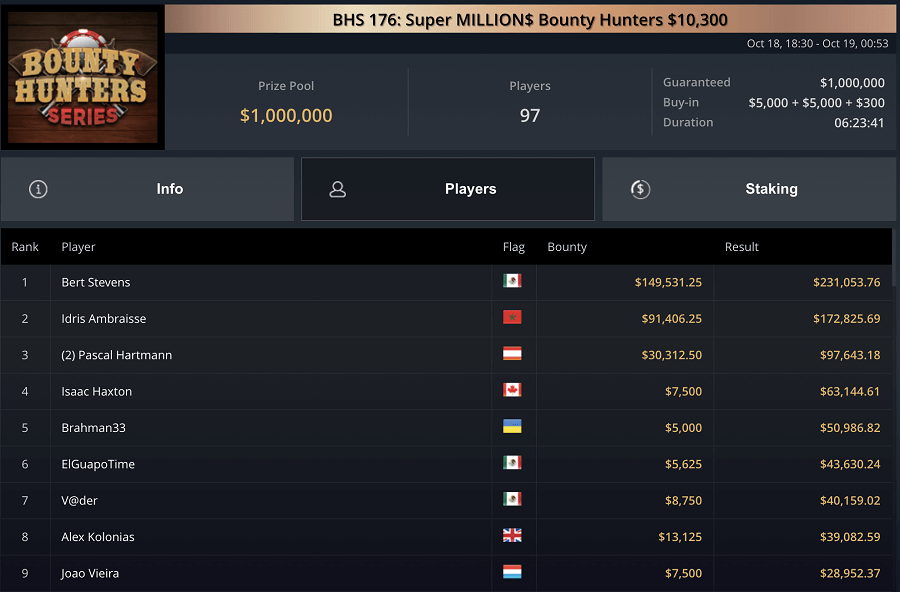 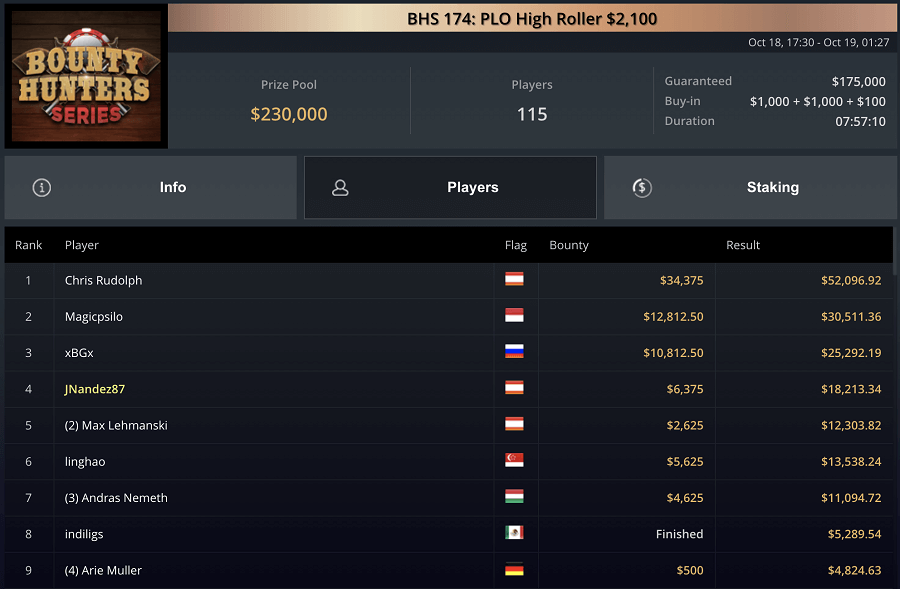 Monday’s second-biggest buy-in was for BHS 204: $1,260 Six Shooter High Roller, which surpassed its guarantee thanks to 69 entries. The top nine finishers took home a portion of the cash prize pool, and $82,800 in total prizes were awarded among the successful participants.

It took just over seven hours to divide all the money, and German poker pro Rainer Kempe took home the lion’s share of $21,788.40 after defeating Chris Klodnicki ($12,180.07) in heads-up. 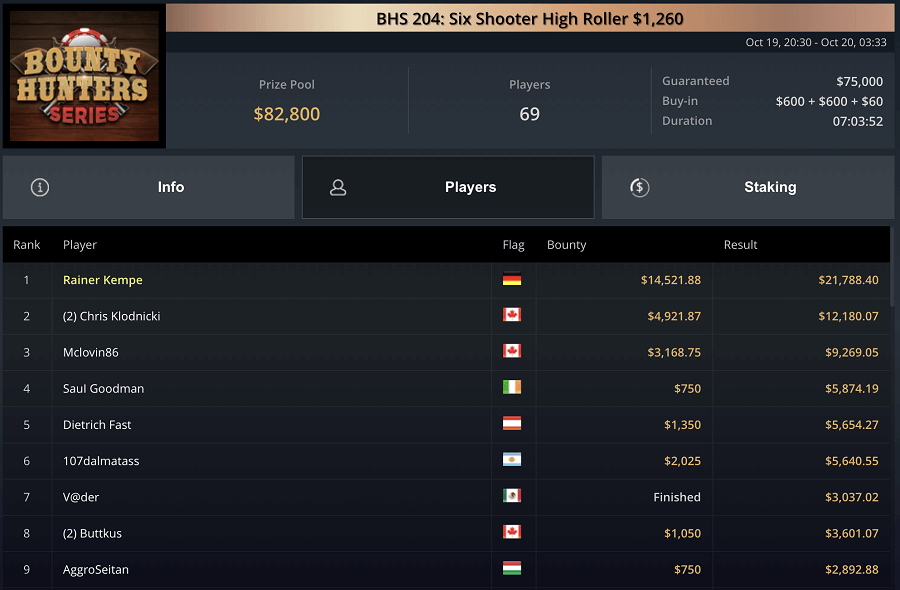 The inaugural Bounty Hunters Series is now on the home stretch and will wrap up this upcoming October 25th. Get in while you still can!