With the conclusion of the $1,700 Main Event final table, the World Series of Poker Winter Online Circuit has officially concluded on 16 Jan.

Macau-based high stakes cash game player Paulius Plausinaitis was the chip leader heading into the showdown, and accumulated all the chips within three hours. On top of his seven-figure payday, he also earned a $50,000 LiveX Sponsorship courtesy of Natural8. 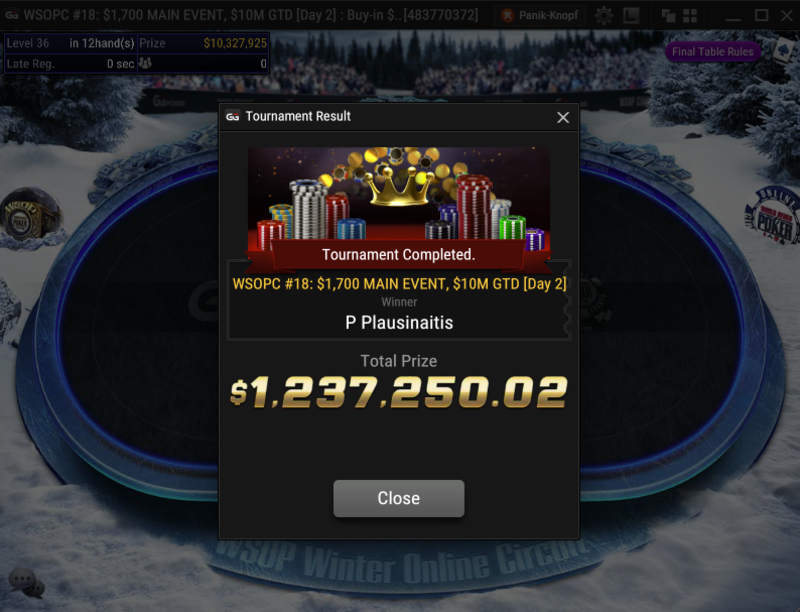 After a break of five days, the remaining nine contenders from a huge 6,395-strong field returned to their seats. Each had at least $123,106 locked up for their efforts, which is what Israel’s “BetAddict” had to settle for when they lost a flip with ace-king suited against the pocket jacks of Artem “Amsterq” Prostak.

China’s “DaiMing141319” only played one hand actively, in which their king-queen came up short against Joseph Cheong’s ten-eight suited. Alexandru Papazian became Cheong’s next victim, when he jammed an ace into the jacks in a blind battle - reducing the field to the final six.

Prostak became the first player above 100 million in chips, but then suffered several setbacks. He lost a flip to “turkey1” and then saw his aces cracked by the jacks of “likeboy”, as a jack rolled off on the river. “turkey1” eventually sent Prostak to the rail in 6th place with flopped trips.

Finnish poker pro Joni Jouhkimainen also fell victim to Cheong’s hot run, who then also knocked out “likeboy” with a flopped full house. However, the run-good of this Natural8 finalist stopped there. Cheong lost chips to Plausinaitis and then doubled “turkey1”. After jamming ace-four out of the small blind, Cheong was called by Plausinaitis with queens. The queen on the turn sent Cheong out in 3rd place for $692,276.

Plausinaitis entered heads-up with a commanding five-to-one lead. Two double ups later however, it was “turkey1” who was in the driver’s seat. Plausinaitis regained the lead with the second nut flush, and ultimately finished the job with ace-ten suited versus queen-nine suited. “turkey1”, who had cashed for just over $4,500 on GGPoker prior to that, earned the runner-up prize of $923,165. 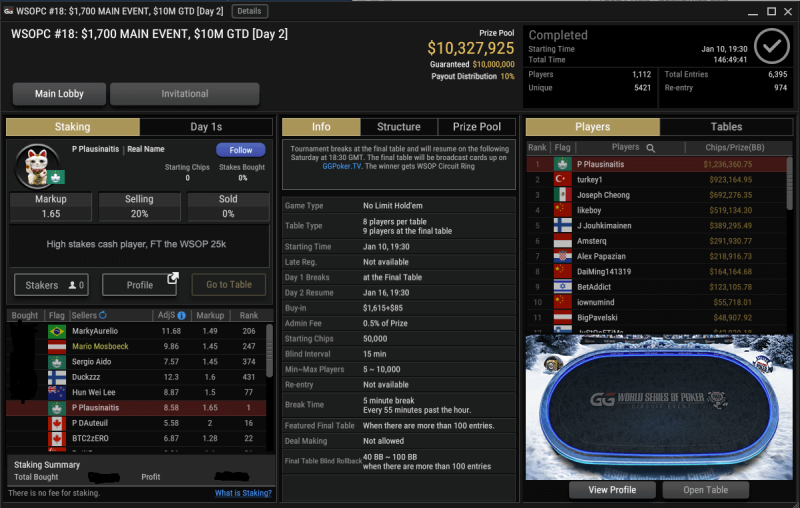 For Plausinaitis, the payday of $1,236,361 was further sweetened by the WSOPC ring and a $50,000 LiveX Sponsorship courtesy of Natural8. It was also the single biggest MTT cash of any Lithuanian player so far.

Three Natural8 Winners During the Festival

$1,700 Main Event champion Plausinaitis collected the biggest prize of the entire festival, and another two Natural8 players earned WSOP Circuit rings. One of them was already a Natural8 ambassador - Team Bling’s Anson “Tara@0z” Tsang, who claimed his second WSOP bracelet during the summer online series on the GGPoker Network.

In the first event he played, Tsang reached the final table of Event #10 CHRISTMAS PLOSSUS on his second bullet. In a field of 3,628 entries, the poker pro from Hong Kong was in the middle of the pack when the action resumed. He made it all the way, to acquire another badge for his Natural8 profile.

One weekend later, fellow two-time WSOP bracelet winner Michael Addamo topped a huge field of 8,725 entries in Event #15 $400 NEW YEAR COLOSSUS. It was a dominating final table performance by the Aussie, who steamrolled to victory once he had taken over the top spot.

Last but not least, it was Plausinaitis who took home Event #18 $1,700 Main Event, becoming the first Natural8 player to claim the largest sponsorship prize since the launch of the LiveX promotion last year. His $50,000 package includes a 12-month LiveX Crew Sponsorship, a $15,000 Las Vegas Package and $35,000 for live event sponsorships over 12 months.

Results of the side events and WSOPC ring events also counted towards the $100,000 Player of the Series Leaderboard, which paid out the top 100 spots. The first payout bracket added $100 to players’ balances while the top ten received at least $2,250.

Some of the biggest names in the online and live poker circuit finished in the top ten including Niklas Astedt, Ole Schemion, Pascal Hartmann, Andras Nemeth, Artur Martirosian and Ami Barer. Aleksei Barkov earned 18,716.40 points to finish 2nd for $8,000, but it was Wei Zhao with a points total of 23,211.96 who collected the biggest slice at $10,000. 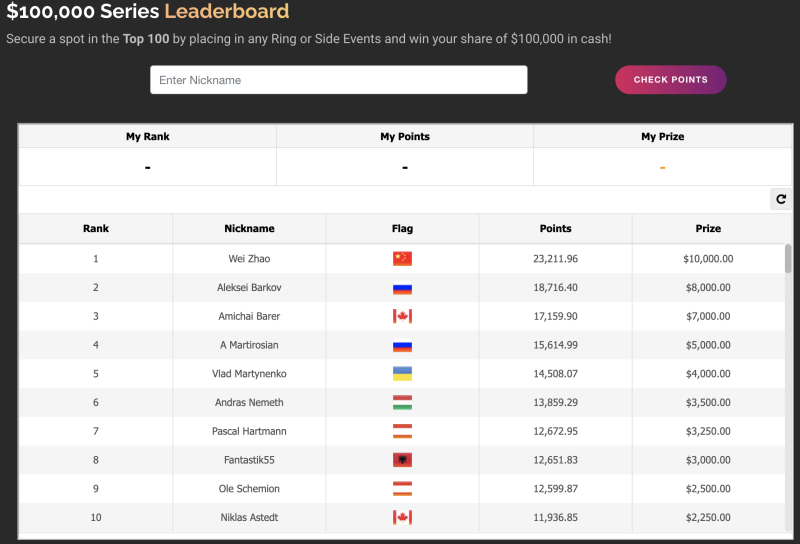