The final two starting days of the World Series of Poker $10,000 Championship Main Event have concluded this past weekend. A unique field of 674 entries emerged, resulting in a prize pool of $6,470,400. All prize pool information has been made available prior to the start of Day 2, and 179 hopefuls will battle to earn a profit on their investment.

Below is a recap of the action on Day 1B and 1C, which also featured two Natural8 Team Hot ambassadors as well as the Natural8 Freeroll qualifier.

Blaz Zerjav Atop the Leaderboard on Day 1B – 42 Players Advance

The second starting day gathered 171 entries in total on Saturday.

Kevin Martin saw his hopes vanish when a flopped top pair with jack-nine suited rivered a jack-high straight. Amir “8ty4calling8” Dvir made the queen-high straight with the same card, while Felipe Ramos lost a flip and came up short in his bid to reach Day 2.

The strongest starting day by a small margin emerged on Sunday, when 257 players took a shot at glory. Once the final hand of the night was dealt after approximately nine hours of online poker action, only 75 hopefuls still had chips at their disposal.

Canada’s Senthuran “Prodigal Sen” Vijayaratnam shot to the top of the overall leaderboard as he finished Day 1C with an astonishing 966,714 in chips, more than 16 times the starting stack. The UK’s Jesse “sabor de mar” Wigan was the only other player above half a million, and their number of 642,267 vaulted them into 2nd place overall for the start of Day 2.

Burns was also responsible for the elimination of Natural8 Freeroll qualifier “vansy1988”, when he defended the big blind with ace-six suited and flopped trips sixes. “vansy1988” eventually got their chips in after the turn with a pair of kings and failed to catch one of the remaining two outs.

Two Natural8 Team Hot ambassadors, Pete Chen and Kitty Kuo, were in action on Day 1C. Neither advanced, with Chen meeting his fate when ace-jack suited came up short against ace-king. Kuo lost a flip with queens against ace-king when the dreadful ace appeared on the river.

Stoyan Madanzhiev, who won the WSOP Online 2020 $5,000 Main Event, missed out on a repeat victory when he got a short stack in with ace-jack against the ace-queen of Vitaliy “Durdy” Pankov. Runner-up Wenling “HappyDX” Gao also bowed out in level 10, as did bracelet winners Michael “YesPlease” Clacher, Melika “Melirazavii” Razavi, Timothy Adams and Natural8 Team Bling member Hun Wei Lee.

Big names such as Mikita Badziakouski, Dan “oiltrader” Shak, Stefan Schillhabel, Dietrich Fast, Gianluca Speranza, Jack Sinclair and Dario Sammartino also all vanished without anything to show for. Patrick “Egption” Tardif and Michiel “Easterdamnz” Van Elsacker found themselves on the rail, and Bertrand “ElkY” Grospellier became the final casualty of the night.

The Plan for Day 2

All remaining 179 players will battle for a portion of the $6,470,400 prize pool, with only the top 80 finishers getting paid. The action resumes at 1 p.m. EST (6 p.m. GMT) with blinds of 2,500/5,000 and a big blind ante of 500. All levels last 30 minutes each, and Day 2 will conclude once the final nine players of the international portion of this Main Event has been determined. 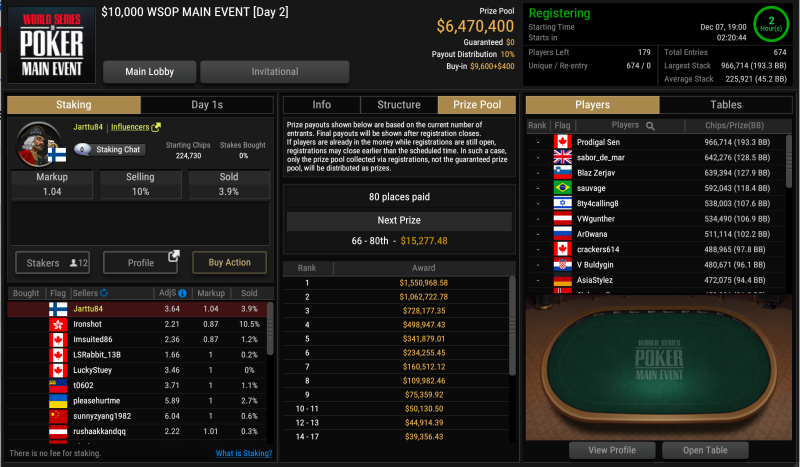 Previous Article
What is Bitcoin and How Does it Work?
Next Article
Get To Know MTT Specialist Bryan Paris