The flagship tournaments of the European Poker Tour (EPT) Online on PokerStars and High Rollers Week (HRW) on the GGPoker Network have concluded this week.

Both festivals crowned their respective champions and have successfully wrapped up. Below is a recap of the final tables in a nutshell, as well as some overall statistics and player accomplishments.

After three tournament days, the final nine players out of a field of 1,304 entries were whittled down to a final table. A champion was determined in the $5,200 Main Event on November 18th, winning the lion’s share of the $5,620,000 prize pool.

All finalists had at least $78,797 locked up. Within the first 40 minutes, three contenders ran out of chips. Kazakhstan’s “vip25459”, who had qualified through a $22 satellite, was the first to bust. This was followed by online legend Jon “apestyles” Van Fleet, who lost a big flip with ace-king versus pocket jacks.

For Andreas “daskalos20” Christoforou, the end came in cruel fashion when his aces were cracked by the ace-king suited of David “MissOracle” Yan. The New Zealander also dashed out a bad beat to Brazil’s Enio “Bozzano JNR” Bozzano, when cracking kings with queens.

Viacheslav “VbV” Buldygin was the early chip leader on the final table after knocking out Van Fleet, but had to settle for 5th place. This was followed by “tikidiii” from New Zealand. Down to the final three, Yan became short when he was caught bluffing with a busted queen-high flush draw and fell in 3rd place for $520,966.

The heads-up duel for the seven-figure top prize then lasted all but seven hands. Timothy “Tim0thee” Adams and Sweden’s “WhatIfGod” both flopped top pair and rivered trips aces, as the kicker played in favor of “WhatIfGod” with ace-ten versus ace-nine. Adams collected $728,633 for their efforts while “WhatIfGod” took home $1,010,082, the largest single prize of both festivals. 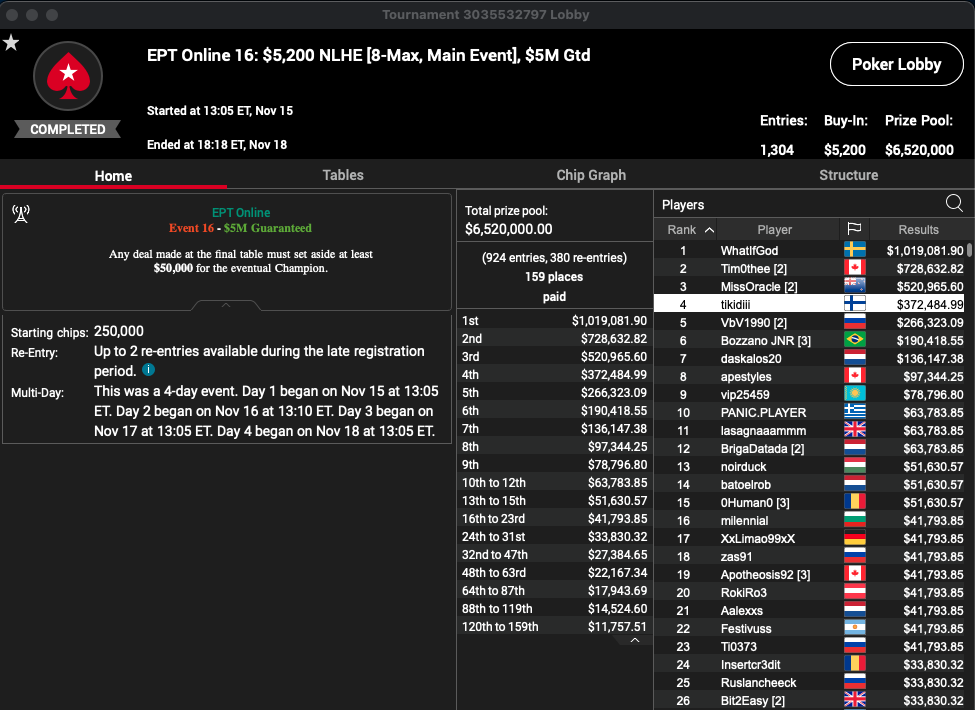 HRW #18 $10,300 Super MILLION$ Main Event came with a guaranteed prize pool of $5 million. Thanks to 581 entries, it paid out a whopping $5,810,000. After a long Day 1 on Sunday, that field was also whittled down to the final nine who returned to the live-streamed showdown on Tuesday.

David Yan led a star-studded line-up, while trying to secure his spot at the EPT Online Main Event final table at the same time. Not far behind in the counts were Davidi Kitai and Niklas Astedt, with the latter taking the lead after the first hand by knocking out Sergei “iplaytooslow” Denisov.

Aleksejs Ponakovs ended up second best with king-jack versus ace-six suited, while Aleksei “JokerFace” Barkov could not get there with ace-queen against the ace-king of Natural8 contender Mike Watson. The Canadian mounted a miracle comeback from very few chips, and even eliminated Yan in 5th place after prevailing in a flip.

Andrii “Brahman33” Novak was sent to the rail by Watson to reduce the field to the final three. The Canadian ultimately doubled six times in total during the final table, but there was no seventh time when sevens lost a flip against ace-king. Watson took home an impressive $498,712.97 for their efforts, which left Eelis Pärssinen and Kitai to battle for the title.

Pärssinen had started the final table with the second-shortest stack, but began heads-up with a 3-1 lead. Kitai doubled once and eventually prevailed with ace-eight versus ace-deuce to claim the victory and a top prize of $726,839.43. Pärssinen ended as the runner-up in the same event for the second week in a row, earning $602,066.47. 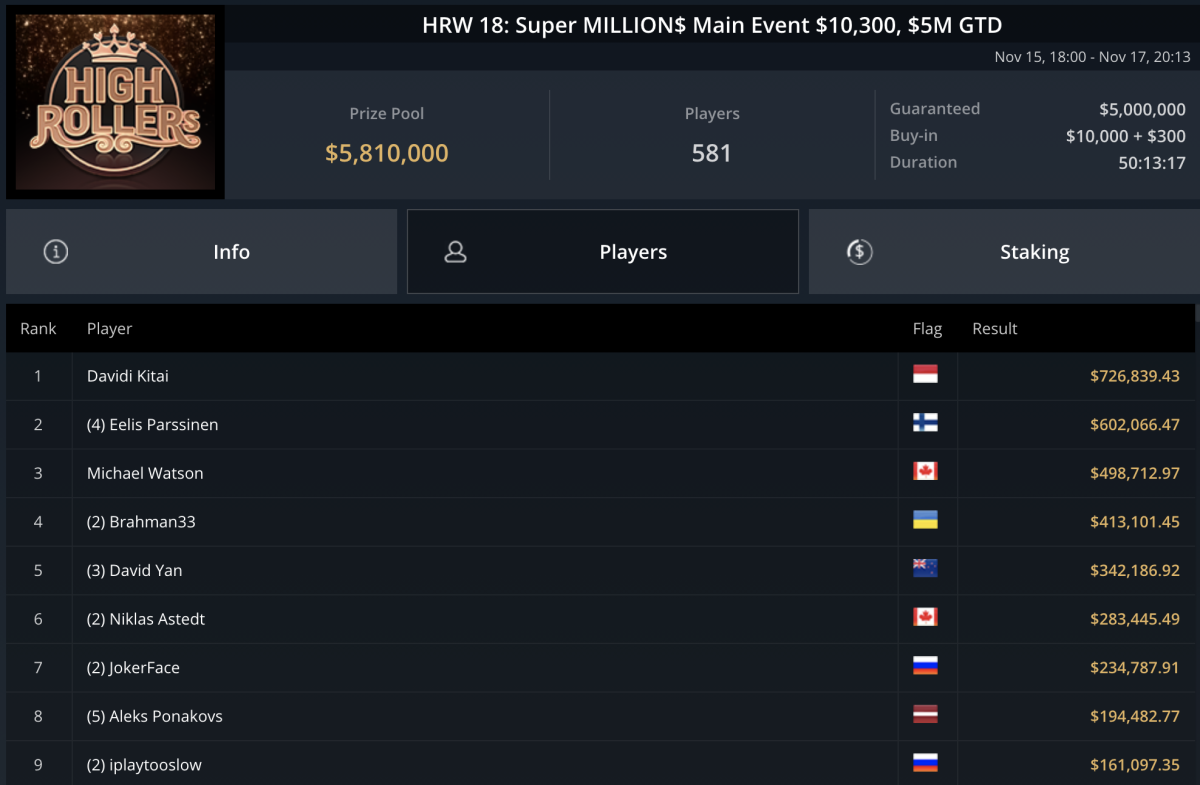 Key Numbers of Both Festivals

Finland’s Eelis Pärssinen was the most successful player across both festivals, as he reached six final tables and finished no worse than 4th in each of them. He won the EPT Online $25,000 Super High Roller and finished runner-up twice in HRW #18 $10,300 Super MILLION$. In total he cashed for more than $1.85 million!

All high stakes online poker regulars will now shift their attention to partypoker’s Caribbean Poker Party, which has already crowned their first champions. A total of 15 tournaments are scheduled from November 13th to 24th and the $5,300 Main Event also comes with a guaranteed prize pool of $5 million.

Canada’s Pascal Lefrancois is the biggest winner so far, taking down the $25,500 Super High Roller, which attracted a field of 84 entries. Only seven made it to the final table which included big names such as Isaac Haxton, Sam Trickett and Sergi Reixach. In heads-up, Lefrancois prevailed against Adrian Mateos and scored the top prize of $585,175. Runner-up Mateos walked away with $370,477.

Previous Article
Battle of Malta: Week 2 Highlights
Next Article
All About the WSOP 2020 Main Event