Final Look at the Omaholic Series 2021

The largest online poker festival dedicated to the great game of Pot-Limit Omaha has wrapped up on the GGPoker Network, with the series ending with a double Natural8 victory in the $400 Main Event.

Read on for a summary of the overall festival, as well as the final results of the $55 Mini Main Event and the flagship $400 Main Event.

This series on the fastest growing online poker network guaranteed $7 million in prize pools. Once all 207 regular events were completed, the overall prize pool amounted to more than $9.8 million. Further millions were awarded as part of the extensive Side Event schedule.

Most notably, all three $10,300 Omaholic Super High Rollers exceeded their guarantees by a significant margin. The first edition drew 84 entries and was then surpassed in the final two tournaments, which resulted in 93 and 96 entries respectively.

The $55 Mini Main Event attracted a total field of 10,508 entries across all starting days. Only 1,338 players made it through to Day 2, which then turned into a marathon session to determine the nine-handed final table.

Eight different nationalities were represented when the action resumed on the live-streamed showdown, commentated by Sasha “PokerSasha” Liu and Kevin “RotterdaM” van der Kooi. Brazil’s Andre Abreu was the odds-on favorite and indeed rode his chip lead to victory.

Abreu was the only known poker pro among the finalists and defeated “BigPapaFir” in heads-up. The final hand saw the chips go in after a queen-high turn and Abreu’s set of jacks and diamond flush draw already had the check mark. “BigPapaFir” only had jacks and treys without redraw and had to settle for $44,214.76. 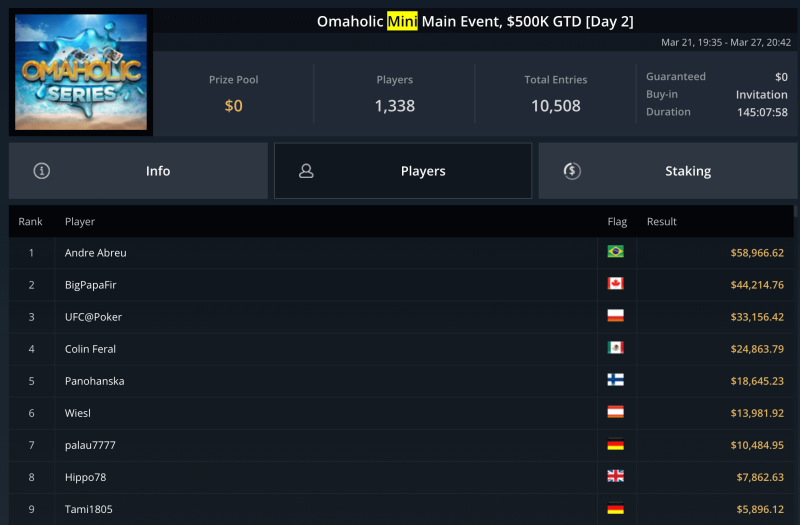 Like the $55 Mini Main Event, the flagship $400 Main Event also missed covering its $1 million guarantee. There were a total of 2,862 entries, of which 490 players qualified for Day 2. Once more, the penultimate tournament day played down to the nine-handed final table and then went on a break.

The following Saturday, “PokerSasha” and “RotterdaM” were once again on the comms to showcase the final table. Two Natural8 players were among those in contention, including Assad “KammyStyyle” Kamran and “Decent@Gambling”.

Several known poker pros made it all the way to the live-streamed final. Omaha specialist Benjamin “dr100percent” Juhasz was the first to fall, followed by Rui Ferreira and “Rishmague”. Down to the final three, last year’s WSOP Online Bracelet Event winner Nick Maimone was ousted in 3rd place for a payday of $83,734.53.

This ensured a heads-up duel between the two Natural8 players, who had locked up a six-figure payday each. Ultimately, Kamran fell short and took home $111,734.53 for their efforts. Flying the North Macedonian flag, “Decent@Gambling” claimed the top prize of $149,001.99 and finished the biggest Omaha online poker festival to date in style. 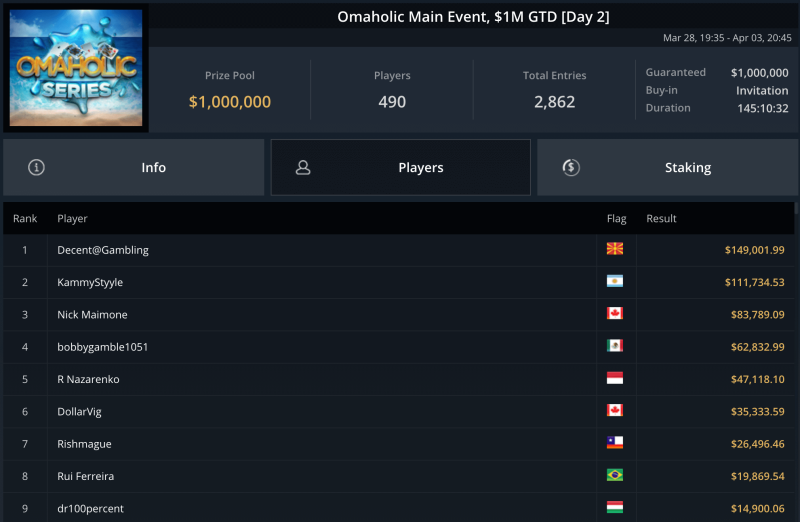 Strong Turnout on Final Day of the Series

March 28 was the final day of the Omaholic Series, and resulted in decent field sizes across the board.

Dzivielevski was also in contention on the final table of the final $10,300 Super High Rollers. The tournament boasted a guarantee of $600,000 but 96 entries pushed the final amount up to $960,000. Only the top 11 spots were paid, with Adam Hendrix ending up as the bubble boy and Fabrizio Gonzalez first to cash for $26,086.94.

Isaac Haxton bowed out in 3rd place for $139,332.67, which left Connor Drinan and Thomas Hueber left in contention. Drinan finished as the runner-up eventually, padding his bankroll with a consolation prize of $177,010.94. For Hueber, triumph came with a payday of $224,878.12. 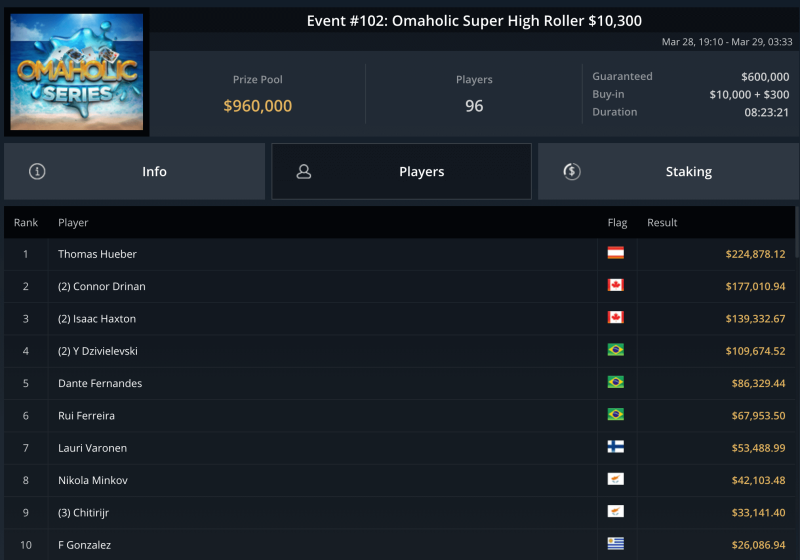 This wraps up the Omaholic Series 2021 but the next major online poker festival on the GGPN is already underway. Stay tuned for more news about the first few days of the GG Spring Festival (GGSF)!