The next high-stakes festival on the GGPoker Network (GGPN) is in full swing as Super MILLION$ Week has already crowned 11 champions. In total, there are 31 tournaments on the schedule and more than $11.2 million in prize money has already been distributed.

Let’s take a look at a summary of the first tournaments, winners and most successful countries thus far.

The Super MILLION$ Week kicked off on the final day of February and featured no fewer than six tournaments of the festival with a guarantee of at least $1 million. Included in that was also Event #6: $25,500 Super High Roller, which determined a champion on the live-streamed final table on March 2.

In the aforementioned GGMasters $1,050 High Roller, a field of 981 entries emerged and the top 161 spots were paid.

Many well-known names of the poker scene added the tournament to their schedule, and among those to run deep was Natural8 WSOPC Main Event champion Paulius Plausinaitis. The Lithuanian player eventually bowed out in 29th place for $4,615.20.

Casualties on the final two tables included notables such as Dzmitry Urbanovich, Jargo “bungakat” Alaväli, and Blaz Zerjav. Jorma Nuutinen made it to the final table and busted in 7th place, followed soon after by Vicent Bosca Ramon. Luke Reeves earned $79,506.10 for the first spot on the podium, and a deal was cut in heads-up between Andorra-based Soraya Estrada ($117,817.65) and eventual champion Brener “Runnerb 2” Vicente ($129,589.55). 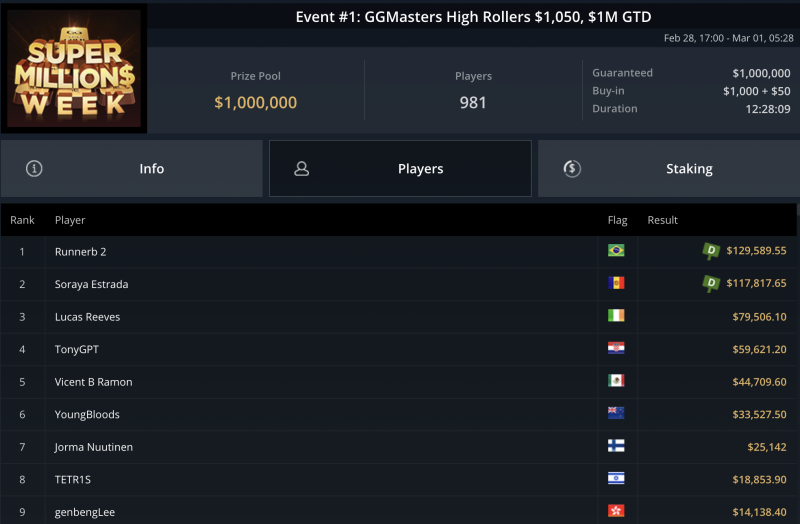 Croatia’s Ivan Zufic departed in 21st place, while the final two tables included the likes of Abhinav “ObellaCiao” Iyer and Dorel Eldabach. Several well-known pros made it one step further such as Ottomar Ladva and Ankush Mandavia. Heads-up featured Canada’s Mike Leah on bullet number four ($77,290.39 in total prizes) and Gytis Lazauninkas - who needed two entries to take it down for a combined score of $84,487.14.

Four-card aficionados entered the fray in the most expensive Pot-Limit Omaha tournament on the schedule. Coming up just three entries short of the $1 million guarantee meant the other 97 entries could enjoy some additional value.

WSOPC ring winner Samuli Sipila came up short of another victory and finished in 6th place, followed by PLO specialists Gavin Cochrane, Thomas Hueber, and James Park. Connor Drinan finished as the runner-up for $179,064.90 in a battle of WSOP bracelet winners, and it was Portuguese pro Tomas Ribeiro who walked away with the top prize of $232,274.

Another Victory for Martirosian in Event #4: Sunday High Rollers ME

Russia got on the scoreboard thanks to Artur Martirosian, who has taken the online High Roller scene by storm in the last two years. He won a trophy and reached another final table during the WPT Russia 2021 festival at Casino Sochi and then jumped into the online action on the GGPN.

In the first two-day event of the festival, Martirosian came out on top of a field of 1,114 entries in Event #4: Sunday High Rollers ME - which had a price tag of $1,050. Notable finalists included Andrea Dato, Isaac Haxton, Georgios Zisimopoulos, and Pavel “EzzzGame” Plesuv.

A new edition to the regular schedule on Sundays was the Sunday 500 Special Edition - with a buy-in of $5,250. The $1 million guarantee was easily met thanks to 299 entries, which created a prize pool of $1,495,000. Only the top 44 finishers cashed for at least $8,968.05 and Natural8 Team Bling member Daniel Dvoress was the first to bust in the money.

Other Natural8 players to cash were Julian Stuer, Michael Addamo, Paulius Plausinaitis and Sosia “Aunty_Ninja” Jiang, but all bowed out prior to the nine-handed table. After getting through big names as Pablo Brito Silva, Kenneth Smaron, Nick Petrangelo, Farid Jattin, Ankush Mandavia, and Johan Haugen, an all-European heads-up duel was set.

Viacheslav Buldygin had fired four bullets and turned that into a $226,671.90 payday. However, it was Dutch poker pro and Vienna resident Jans Arends who claimed the biggest slice of the prize for $302,271.99. 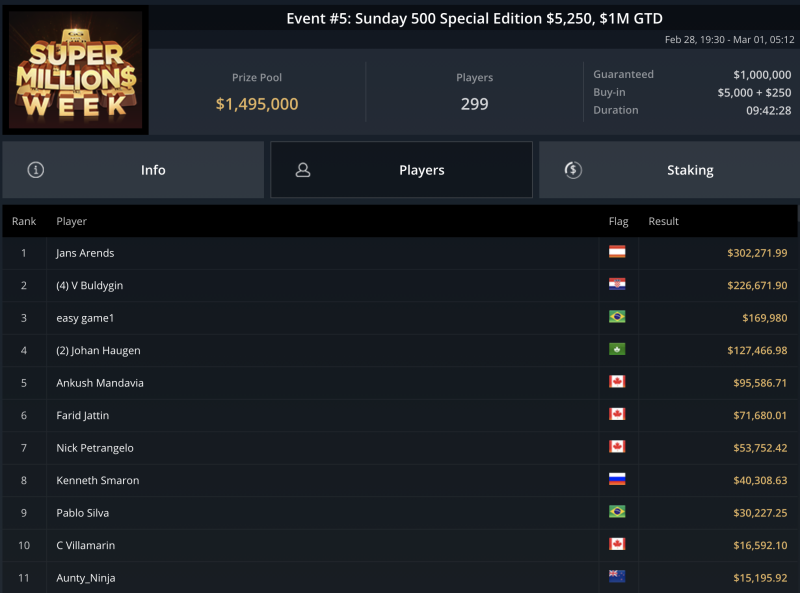 The sixth and final tournament of the busy opening Sunday schedule was the joint most expensive event of the festival. Event #6: $25,500 Super High Roller attracted a field of 114 entries and the top 15 finishers earned a slice of the $2,850,000 prize pool.

All remaining nine contenders were sent on a two-day break until the live-streamed final table. Seth Davies was the chip leader followed closely by Arsenii Malinov and Matthias Eibinger. For the latter, it all came to an end in 6th place as he was eliminated by Germany’s “REPTAR”. Joao Vieira’s chips also went to “REPTAR” soon after. 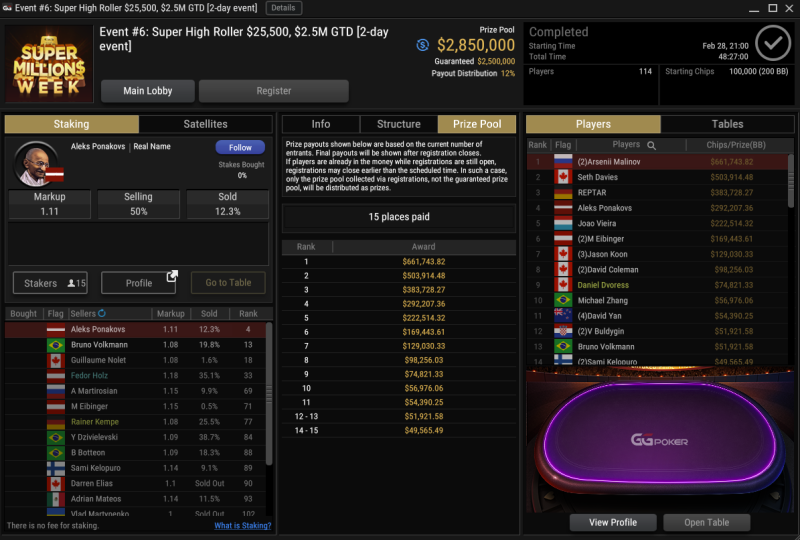 The second day of the festival saw three tournaments kick off and two champions crowned.

Event #7: Bounty Hunters HR Special saw 730 entries pony up the $525 and turn that into a prize pool of $365,000. Some of the usual suspects on the final table were Shyngis Satubayev, Carlos “YuDabao4” Branco, Diego “TheProjector” Ventura, and Irish player “Kojaque”.

Polish player “turistolituano” had to settle for $21,394.38 in prizes while “hieperdepipi” kept the massive PKO bounty on their own head. As a result, they walked away with $53,486.26 - more than half of which came from knockouts throughout the nine hours of tournament action.

More bounty action was guaranteed in Event #9: $2,100 Bounty, which attracted a field of 352 entries and $704,000 in prize money. Oihan “VIVAGGPOKER” Abarzuza bubbled the final table, and some of those that made it further were Martin Pineiro, Markku “ExVang” Koplimaa, “TheFirestarter” and “N0tToday”.

Ivan Zufic narrowly missed out on victory and earned $53,034.08. American WSOP bracelet winner Elio Fox fired three entries and converted those into the top prize worth $116,221.87.

Another tournament started on the same day and played down to a winner on March 2. That was Event #8: Monday Main Event, which paid its $517,000 prize pool to the top 60 finishers in a field of 517 entries.

2020 WSOP Main Event winner Damian Salas bubbled the final table and cashed for $4,289.39. Aleks Trofinov, British legend Chris Moorman and Ivan Zufic once more were among the finalists. Brazil’s Renan Bruschi cashed for $75,644.75 and the only one to earn more was Canada’s “EatPlayShove” at $100,874.24. 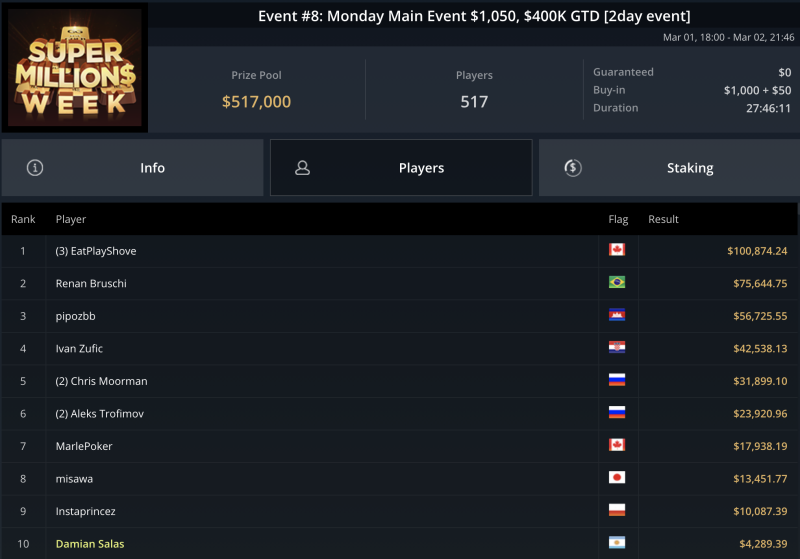 The next Daily $525 Bounty Hunters HR Special took place on March 2, and it took eight-and-a-quarter hours until one player had all the chips. In this case it was accomplished pro Bruno Volkmann, who earned the top prize of $45,098.03.

The final table also featured the likes of Neel “Neel” Joshi, Ivan Skoblov, Artur Martirosian, and Joseph Cheong. Martirosian fired five entries (trailing only “bayman458” with six bullets on the final table) and earned $19,415.47 for 3rd place. Cheong needed three entries and turned those into $26,680.53 in bounty and cash prizes. 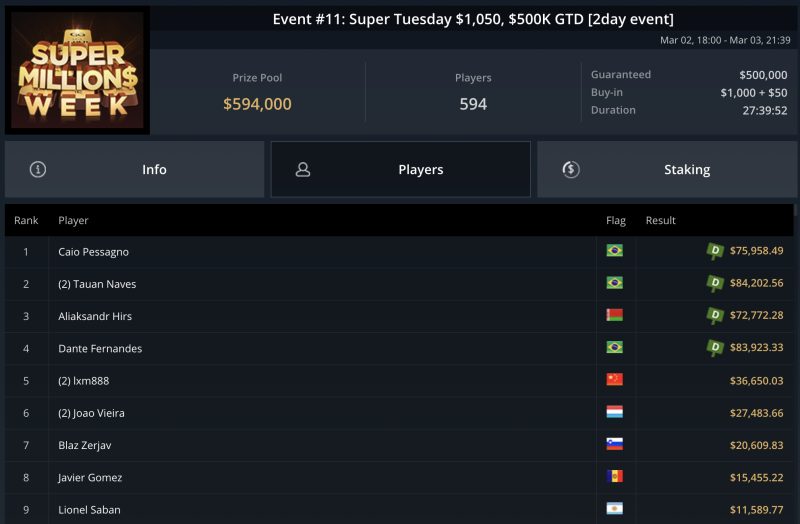 Super MILLION$ Week continues with more high-stakes action every day until March 7. Two of the four starting days of the $10,300 Main Event have already been completed, and another two flights await on March 6 and 7.

The second flight wrapped up with 18 players out of 142 entries advancing, after 22 levels of 20 minutes each. Vlad-Stefan “HaiFanFan” Lache earned a similar big stack as Shehadeh, and was followed by Thomas Muehloecker, Alex Foxen, Chi Zhang, Wiktor Malinowski, Isaac Haxton and Alexandros Kolonias.

Stay tuned for the next batch of results during online poker’s most exciting High Roller festival this March.