First Look at the Omaholic Series 2021

The Omaholic Series 2021 Kicks Off on Natural8

The very first online tournament festival dedicated to the four-card game of Omaha has commenced on the GGPoker Network. Until March 28, all aficionados of this great game can take a shot at more than $7 million in guaranteed prize pools in the Omaholic Series 2021.

The Natural8 blog team takes a closer look at some key tournament results. Below you will find a summary of notable mid and high stakes events that have already concluded.

The action kicked off on March 14, with plenty of High Roller events part of the schedule. Among them was the first of three $10,300 High Rollers, which easily surpassed its guarantee.

Things got underway with Event #2: Omaholic Bounty Bash, and the PKO tournament came with a price tag of $525. Thanks to 385 entries, the guarantee was smashed and $192,500 in cash and bounty prizes were distributed.

Online streamer Evan “NEONPILS99” Parkes was the first to earn a portion of the cash prize pool in 55th place, and fewer than half a dozen players beyond that walked away without any bounty prize on top.

Multiple entries were no rarity and some of the contenders had half a dozen or even seven bullets to their name. Kamel Mokhammad made it to 5th place for a payday of $7,502.52 while Miguel Aroso cashed for $11,308.90.

Even more money was up for grabs in Event #4: Omaholic $10,300 Super High Roller as 84 entries emerged in the joint most expensive tournament of the festival. Only the top 10 spots were paid, with Kilian “Birdie Power” Loeffler coming up shy by two spots and “Shr00m Daddy” bubbling.

Laurynas “Lauvai” Vainius was the first to cash. Espen Mrymo fell next, followed by notable pros such as Gavin Cochrane, Ami Barer, Niklas Astedt and Andras Nemeth. Samuli Sipila missed out on the podium and finished 4th as the last finalist with multiple bullets. Dirk Gerritse ($121,916.08) and Kamel Mokhammad ($154,884.57) earned six-figure prizes, but it was “Jiiizes” from Norway who took it down for $196,768.36. 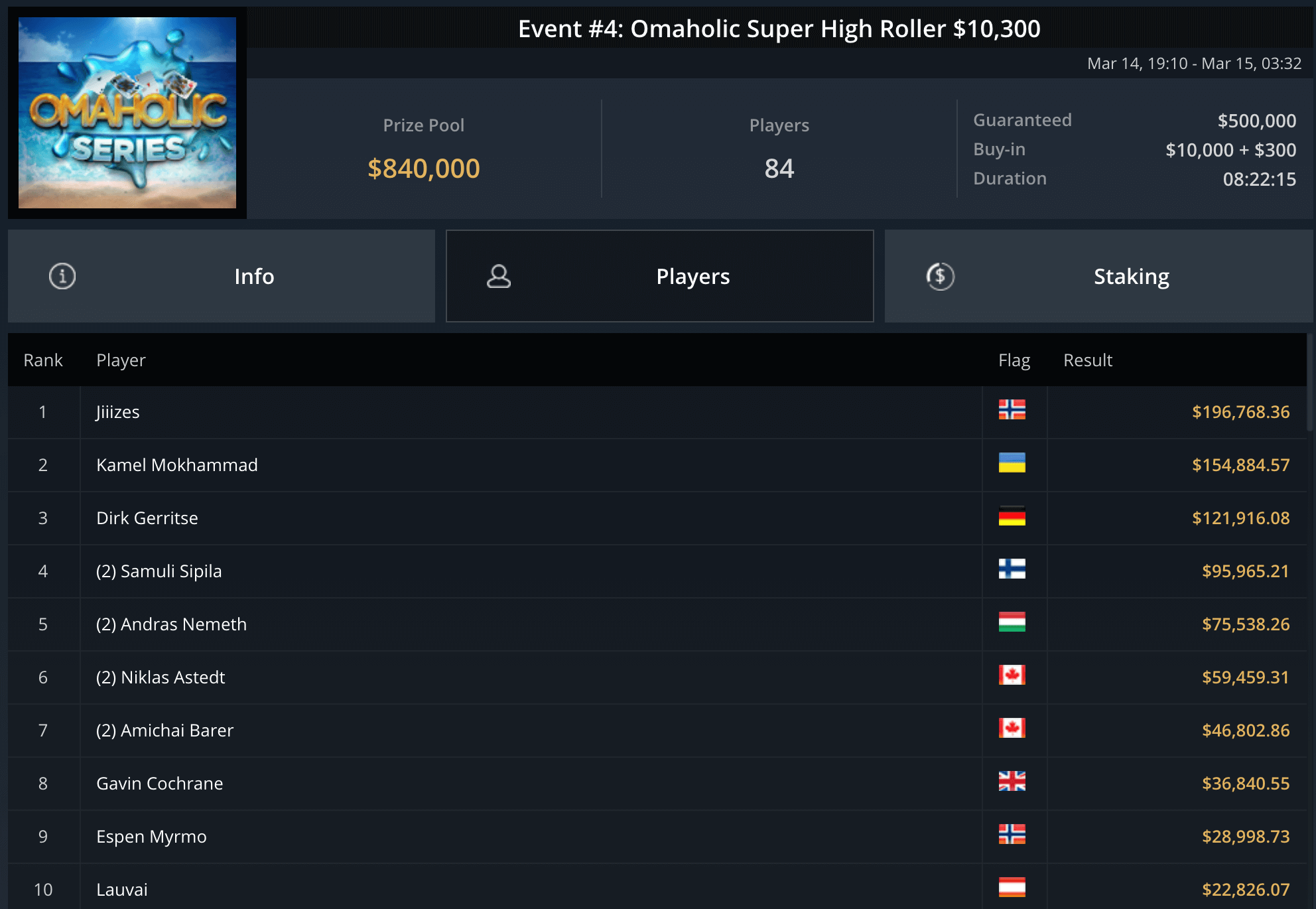 Mid-Week Winners at a Glance

Monday featured several further Omaholic Events. Among the winners was Oswin “Os_winz3” Ziegelbecker, who came out on top of 294 entries in Event #8: Monster Stack $88. The Austrian player earned $4,908.21 for his efforts.

Ziegelbecker almost made it two wins on March 15, when he finished 2nd out of 97 entries in Event #8: $840 Forty Stack. He finished ahead of Patrick Leonard, but it was Dante Goya who eventually topped it all for a payday of $18,024.54.

Most mid-week events featured buy-ins below $100, but the stakes increased on March 16.

Gavin Cochrane and Joao Vieira busted next, while “LPichler” claimed the victory for $21,136.99.

Vieira was also on the final table of another $1,050 High Roller the same day, and cashed in 8th place out of 101 entries for $3,796.56. Aku Joentausta, Dante Goya, Habegger and Alfred Karlsson were among the finalists. Mexico-based “indiligs” cashed in 2nd place for $18,085.55 while Kamel Mokhammad earned his first victory of the festival for $23,459.75. 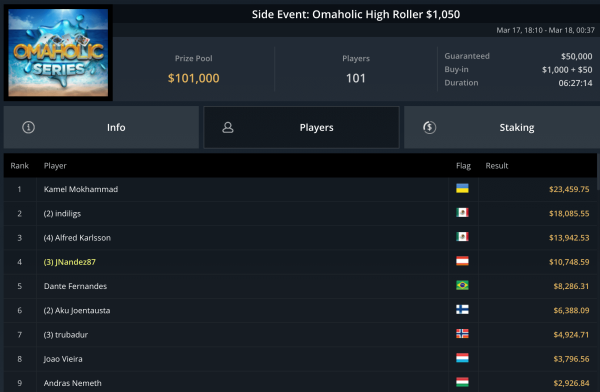 With plenty of Side Events running, the Omaholic Mini Main Event also hosted several daily Day 1s. One of the highlights of the entire festival, it comes with a bargain buy-in of $55 and a $500,000 guarantee. All Day 1 survivors will return to their seats on March 21.