The inaugural GG Spring Festival has entered the second week, and eight days of online poker action on the fastest growing network have concluded. Within the first eight days, more than $64 million in prize money has been generated, and two millionaires have been crowned in the high-stakes contests.

Just one-third of the series is completed and below are some overall statistics including Sunday, April 11.

The Statistics of the Series so far:

While not all scheduled tournaments were able to meet the guarantees, the vast majority easily surpassed their target amounts. The festival is still on track to potentially generate more than $185 million in prize money, which would make it the biggest festival in online poker so far. Guarantees are boosted daily by the network operator as the festival goes on.

The six-max tournament then switched to a nine-handed final table after the elimination of Gintaras Lazauninkas, and Patrick “Egption” Tardif was the first casualty thereafter to collect $3,511.20. Farid Jattin made it to 5th place for $15,740.45 while Luke “lmar54” Martinelli finished as the runner-up, collecting $41,645.32 for his effort. German player “TOTOROOO” earned the biggest slice and took home $57,602.50. 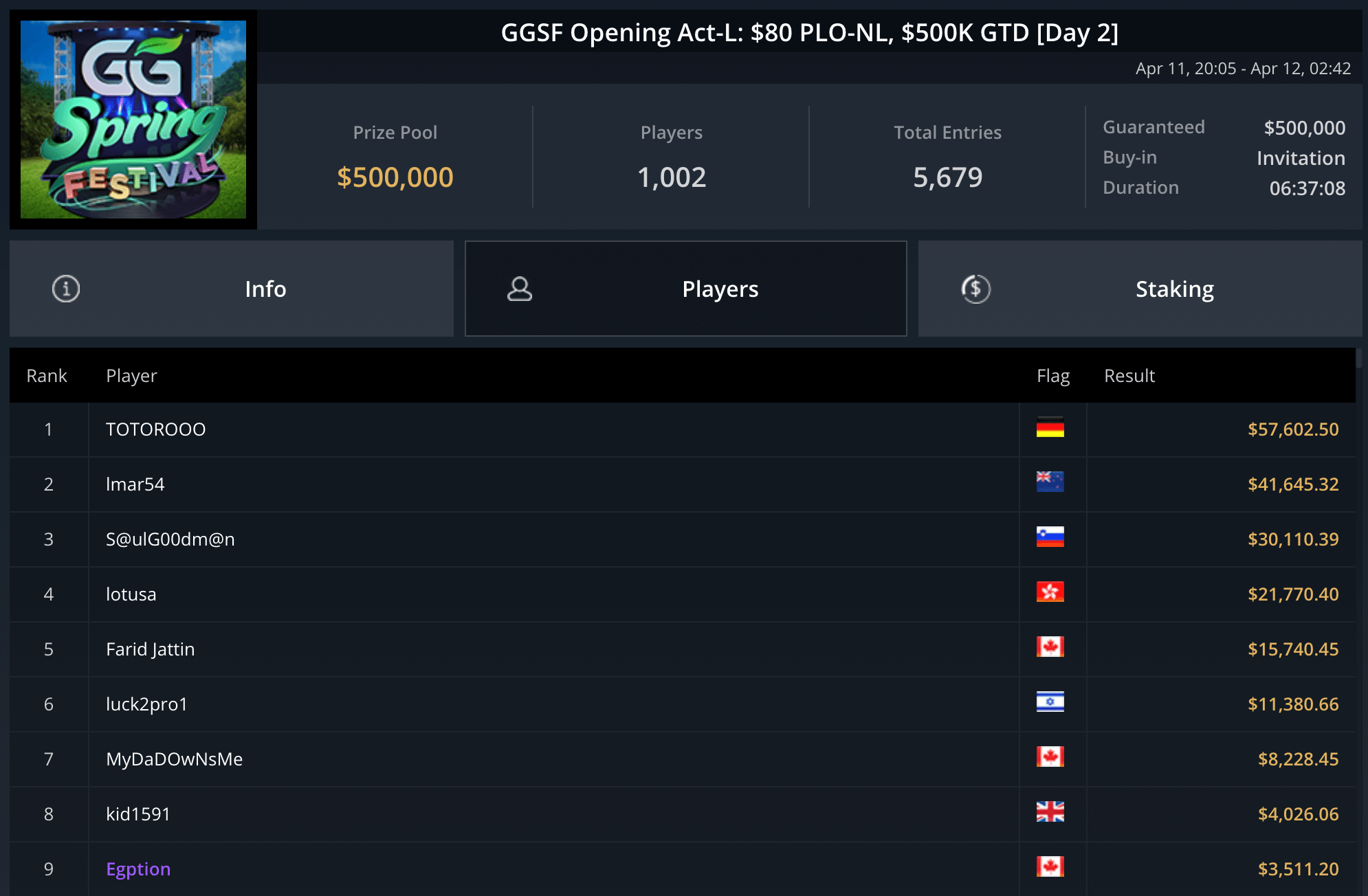 Some of those that fell after and prior to the final table were Jerome “gorgiAAs” Finck, Justin “LappyPoker” Lapka, Seungmook “7high” Jung, Ran “Pearblossom” Koller, and “futomaki”. The final nine contenders were all guaranteed a five-figure payday, and Dimitrios “R3V3N83 04” Michailidis was among them to bank $46,799.87 for 5th place.

Two six-figure prizes were awarded in the tournament as a heads-up deal was cut between Norway’s “25dollscom” and Brazil’s Vinicius “RealGanjaBoy” Miranda. The former earned $129,689.56 and Miranda was crowned the winner but took home the slightly inferior sum of $129,296.24. 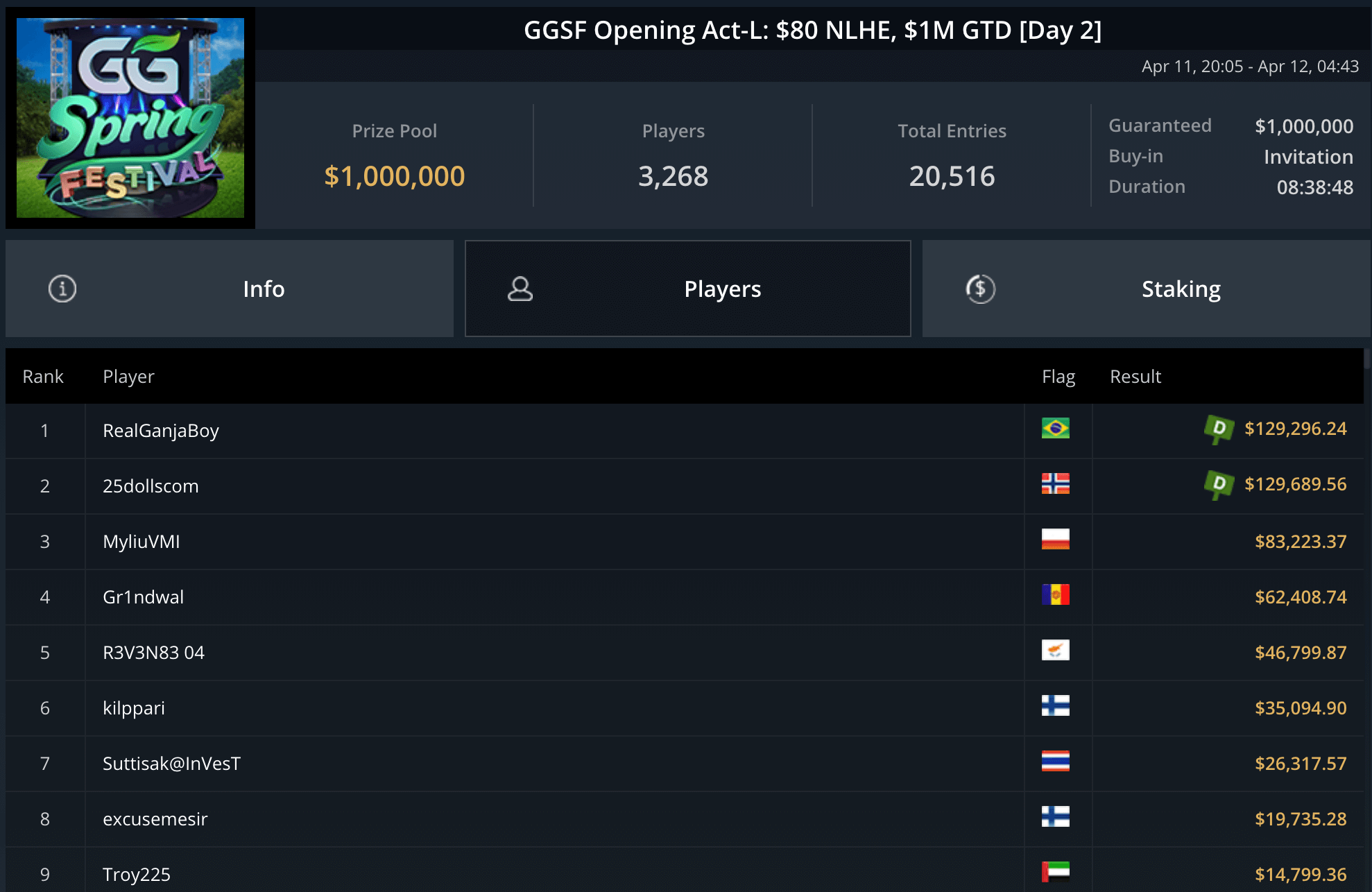 The first live stream of the series concluded on Tuesday, April 6, and what followed were three busy days at the tables in the Low, Medium, and High stakes.

Several notables reached the final table in Event H-20: $1,050 High Rollers Main Event, which drew a total of 550 entries. Ivan Zufic, Sergei Denisov, and Viktor Ustimov were among the first four players to leave the final table. Portugal’s Rui Bouquet reached the podium and earned $54,357.02. In heads-up, Igor d’Ursel ($84,886.93) and Dominykas “MickeyMouse” Mikolaitis ($84,261.53) cut a deal, with the latter then accumulating all the chips.

Both Haxton and Greenwood were active in the High edition at the same time and invested $25,500 to do so, but neither of them made the money. Meanwhile, the biggest names in the world of poker battled for six-figure winnings. A field of 88 entries emerged, and GGPoker ambassador Anatoly Filatov finished third for $302,180.28. Yuri Dzivielevski missed out on another GGPN victory to finish second for $391,973.06, and Dario Sammartino earned the top prize of $508,447.84. 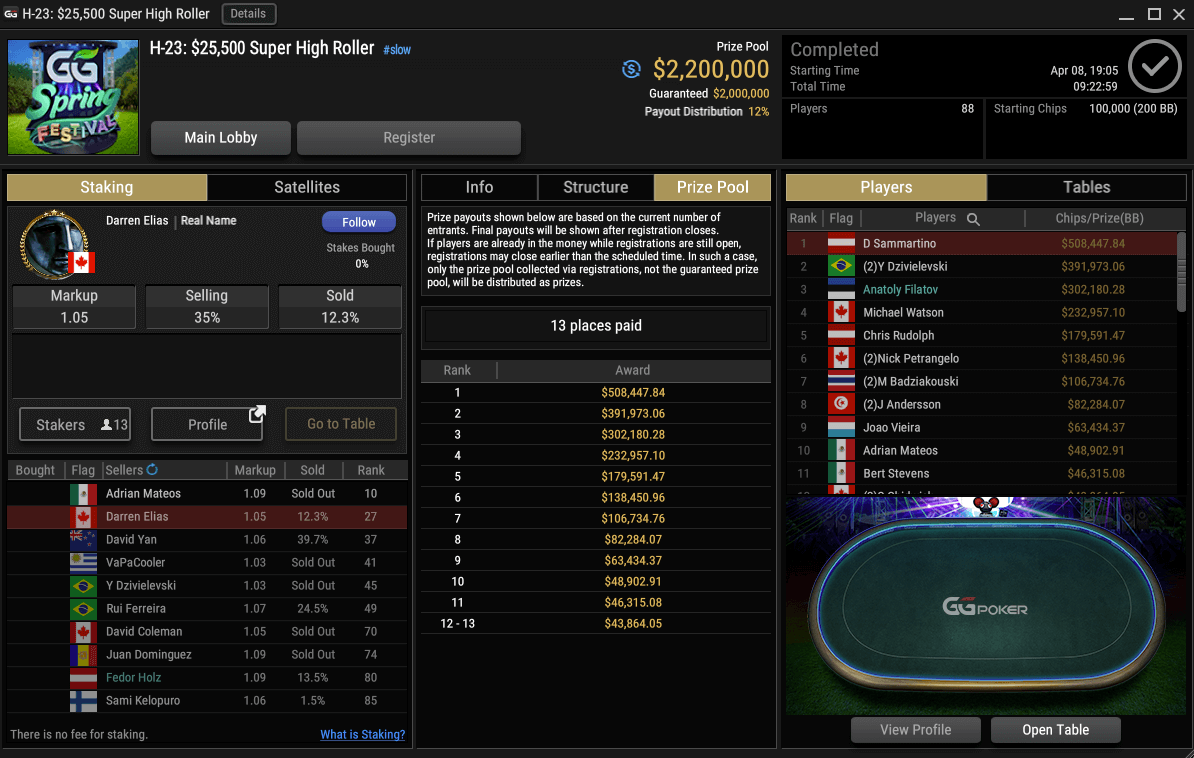 Weekend Winners to a Nutshell

Saturday featured some of the high-anticipated PLO-NL action, and it was made even more exhilarating with the Bounties on top. In Event M-33: $525, 291 entries emerged, and the final table included, among others, Joseph Cheong, Daniel Colpoys, and Arie Muller. Muller reached heads-up and took home $11,158.06 whereas Latvian player “Biezpienelis” topped it all for $24,086.80.

The four-card aficionados also emerged in the $5,250 High tier, which brought in a respectable field size of 123 entries and a prize pool of $615,000. Konstantin Maslak fired an incredible nine entries to end up as the cash money bubble boy. Joao Vieira narrowly missed out on the nine-handed final table while GG OmahaSquad member Fernando “Jnandez87” Habegger converted a second entry into $25,719.66, excluding bounties. 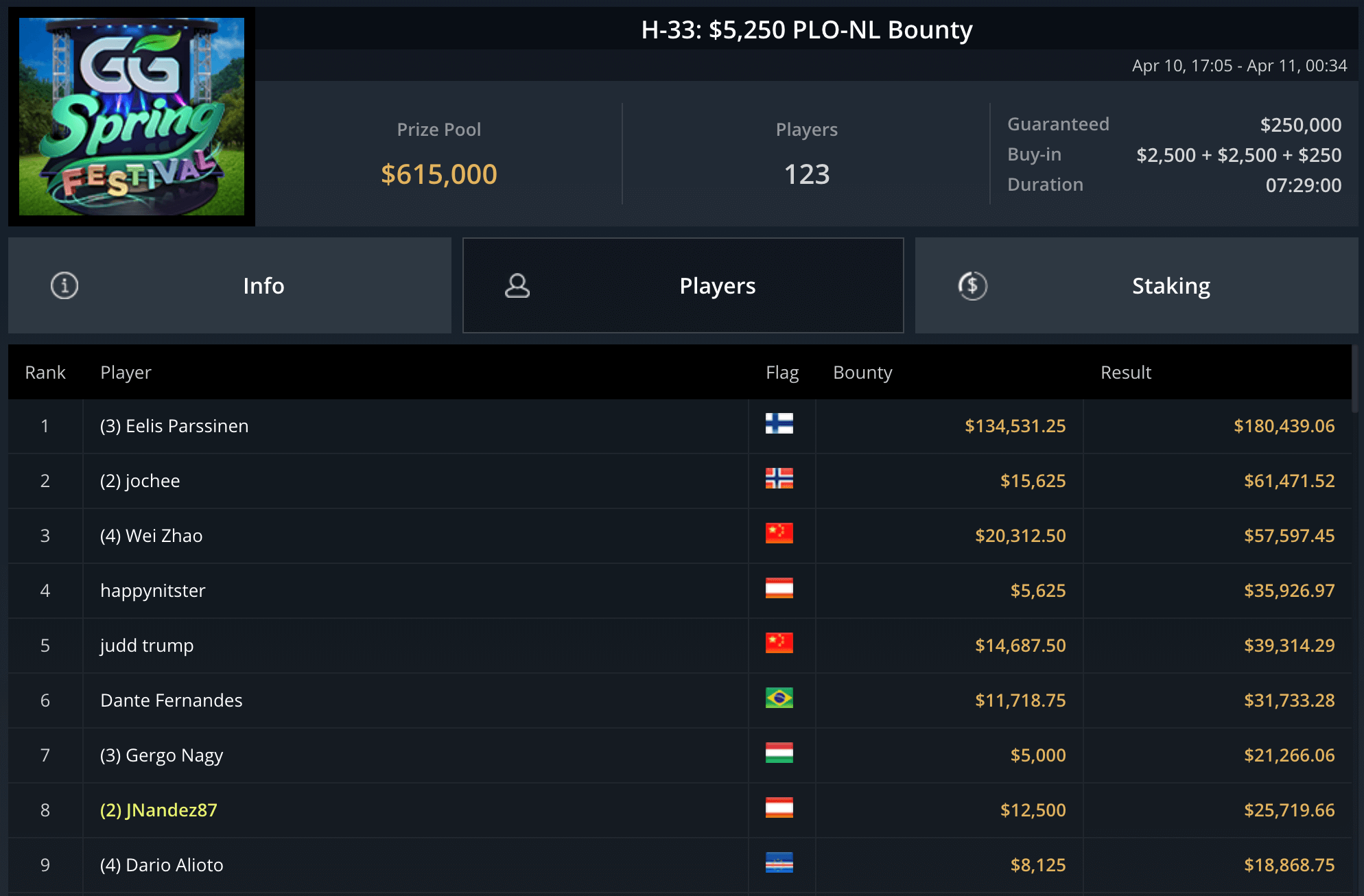 China’s Wei Zhao fired four bullets and made a profit as he finished in 3rd place for $57,597.45. Joachim “jochee” Haraldstad finished as the runner-up for $61,471.52. Eelis Pärssinen scored a humongous payday of $180,439.06, excluding the prize money that he won in bounties, which was already more than what the runner-up and third place earned combined!

Sunday was the busiest day of the entire week with millions upon millions of guarantees up for grabs.

The same prize pool emerged thanks to 1,183 entries in Event M-40: $1,050 High Rollers Main Event, which only determined a champion the following day. That happened to be Canadian player Jamil Wakil, who earned $170,809.64 for his efforts, overcoming the likes of Steven van Zadelhoff, Alex Greenblatt, and “raven symone” on the final table.

Last but not least, the eyes of the high-stakes regulars were set on Event H-41: $25,500 Sunday Five Million. The joint most-expensive event on the schedule was the second tournament with a $5 million guarantee, and it got there thanks to 202 total entries. “xyzpoker” bubbled the cash prizes. Other big names such as Fedor Holz, Michael Zhang, Darren Elias, and Artur Martirosian also fell short of the money.

Daniel Dvoress and Wiktor Malinowski were among the featured players to bust prior to the final table. They were joined by superstars such as Samuel Vousden, Juan Pardo, Ole Schemion, Connor Drinan, and Nick Petrangelo.

Amichai Barer and David Peters were the last two players to bust on Sunday and that sent the remaining eight players on a break, as the final table was streamed the following Tuesday on the GGPoker.tv Twitch channel.

The nine contenders had $109,574 locked up for their efforts, and that’s what China’s Wei Zhao had to settle for after returning with just three big blinds. Next to fall was Brazil’s Pedro Garagnani. Niklas Astedt notched up his second elimination of the final table when he sent Sam Greenwood to the rail with pocket sixes versus ace-four.

Sami Kelopuro missed out on another $25,500 victory and fell in 6th place, followed by David Yan who ran with king-queen into the aces of Astedt. Up next was Joao Vieira who came up short against Shawn Daniels. Astedt then got the last few chips off Jason Koon to set up the duel against Daniels with a massive lead.

It ended quickly as ace-six found no help against ace-ten, thus Daniels was eliminated at second place for $821,689.32. Astedt, who started as the chip leader and knocked out six opponents, earned the top prize of $1,095,740.82 as well as the second seven-figure prize of the festival. 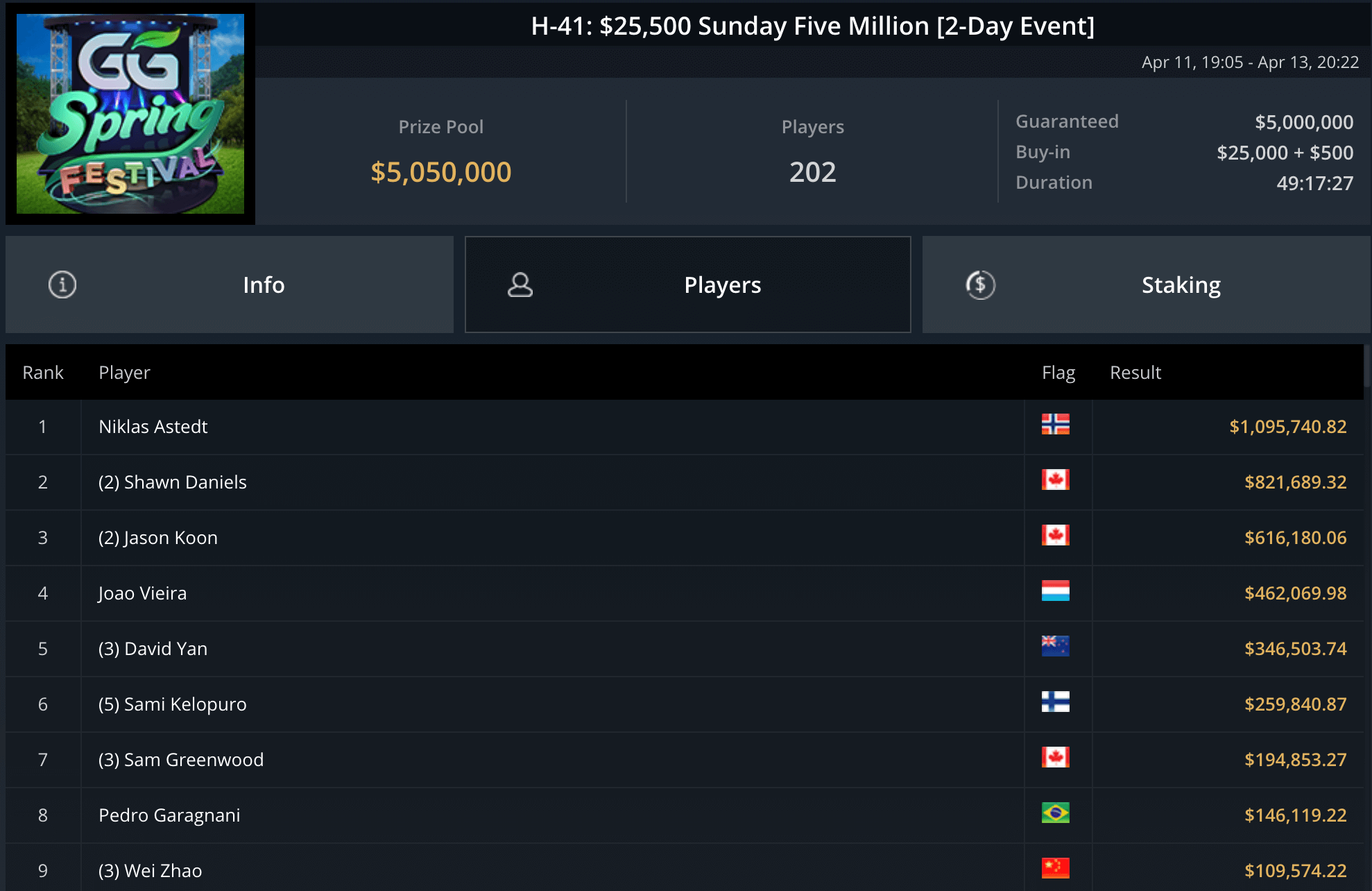 Several $25,500 High Rollers games are still ongoing, and the first flights of the $10,300 Super MILLION$ have also started. For the second time ever, the weekly high-stakes event will take place as a special edition and boasts a gargantuan $10 million guarantee.