It was the busiest day of online poker action on the GGNetwork so far, as WSOP 2020 saw six tournaments run concurrently and four of them playing down to a champion. On top of that, Event #41 $400 COLOSSUS and Event #42 $400 PLOSSUS also cut their field of Day 1 survivors all the way down to the final table.

It was the biggest field in the history of the WSOP as 29,306 entries emerged throughout the various starting days in Event #32: $100 The Opener, creating a prize pool of $2,571,216. Only 3,685 contenders returned to their seats on Sunday to play their way down to a champion. Fewer than two levels were played to burst the bubble, and six hours after kick-off, the event was already down to just 70 hopefuls.

At the final table, the two remaining Canadians, Bret Carson and Jonas Mackoff, were the first to bow out in quick succession. Well-known poker pros Ramiro Petrone and Pablo Silva also settled for 4th and 5th place respectively.

Ronit Chamani then sent Dejan Kaladjurdjevic out in 3rd place, before entering heads-up and with the chips lead against Brazil’s Marcelo “Marolo” Jakovljevic Pudla. Chamani had gathered more than one billion in chips but ten minutes later they all belonged to Marcelo. The Brazilian was at the top of his game: responsible for seven eliminations on the final table and earning his maiden bracelet for $265,879.63.

He is the seventh bracelet winner for Brazil and follows in the footsteps of big names such as Andre Akkari, Alexandre Gomes and Yuri Dzivielevski. On top of that, Marcelo was also the third Natural8 player to take down a WSOP Online event and earned a bonus $7,500 Team Bling sponsorship for his efforts.

The likes of Naoya Kihara, Conor Beresford, Joni Jouhkimainen, Mikita Badziakouski, Simon Higgins and Carter Swidler all made it to the top 100 spots. Adrian Mateos was no doubt aiming for his fourth bracelet, but his run ended in 19th place. Georgios Sotiropoulos and Niklas Astedt followed right after. Natural8 streamer Fedor Kruse made it all the way to 13th place, while Daniel Neilson bubbled the final table.

Three Natural8 players ended up on the final table with a shot at a $15,000 Team Bling sponsorship. Argentina’s Martin “colinchow” Llobera came shy one spot, when he finished in 2nd place for a consolation prize of $246,765.50.

The best story of the day was no doubt that of Canada’s Alex “astazz” Stasiak’s win. He initially entered a $10 satellite, got past the $100 satellite, and then turned that into a massive payday of $343,203.53!

It took nearly nine and a half hours to whittle down a field of 922 entries to a winner in Event #39 $1,500 No Limit Hold’em. It was not an easy task for Welshman Roberto Romanello as he faced online legend Niklas Astedt in heads-up for the lion’s share of the $1,313,850 prize pool.

On his road to victory, Romanello scored several double ups on the final table and closed it out eventually for a top prize of $216,212.95. By doing so, the Welshman became the ninth player to complete the Triple Crown – winning a WSOP bracelet, European Poker Tour and World Poker Tour Main Event.

Other big names such as Alex Foxen, Luc Greenwood and Artur Martirosian fell shy of the final table, while Jeffrey Cormier finished in 9th place. Frenchman Thomas Cazayous was the only former WSOP bracelet winner left in contention but bowed out in 5th place. 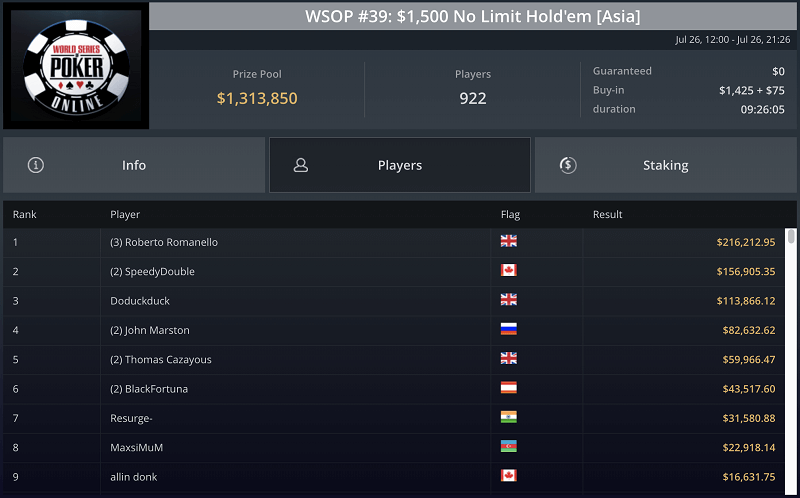 Four-card specialists from Scandinavia came out on top of a field of 532 entries in Event #40 $2,500 Pot-Limit Omaha, as three of them reached the final table and battled for the biggest slice of the $1,263,500 prize pool.

Malaysia’s Paul Teoh reached his second PLO final table in a few days, before bowing out in 7th place and collecting $34,819.02 for his efforts. Hong Kong’s Sai Wah “sws79” Shek made it two spots further and collected $64,805.54 for his deep run.

Down to the final four, the former chip leader and King’s Resort owner Leon Tsoukernik ran out of steam to settle for 4th place and $88,411.76, while the elimination of PLO specialist Shyngis Satubayev in 3rd place for $120,616.93 set up an all-Scandinavian duel for the gold bracelet.

Andreas Torbergsen and Klas Simon Lofberg were within fewer than two big blinds when the heads-up kicked off and the lead swung back and forth several times. Torbergsen cracked aces once to remain in contention but could not recover anymore when he turned a jack-high straight, only to see Lofberg turn over the flopped nut straight. A few minutes later it was all over when Torbergsen missed straight and flush draws, as he finished as runner-up for a juicy payday of $164,552.93.

Sweden already boasts a dozen WSOP bracelet winners including Chris Bjorin, 2014 WSOP Main Event champion Martin Jacobson, Michael Tureniec and Peter Eichhardt among others. Lofberg joined this circle and scored the top prize of $224,493.45 along with it. 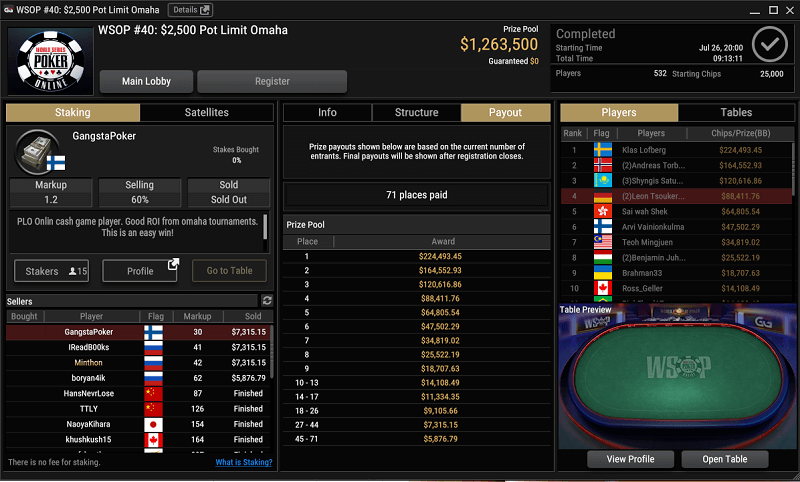 Only 1,946 players out of 12,757 entries made the cut for Day 2 of Event #41: $400 COLOSSUS, with the top 1,575 spots paid at least $840.84. Big names such as Mike McDonald, Thomas Boivin, Joao Vieira, Chance Kornuth, Mark Radoja and Steven van Zadelhoff all reached the final few hundred spots. Austria’s Matthias Eibinger ended up bowing out in 14th place.

A diverse range of nationalities are now left in the mix of the final nine. Lithuania’s Arunas “AngryGoose” Sapitavicius leads the pack with 32 big blinds, followed by Greece’s Paraskevas “Cantaloupe7” Tsokaridis and Finland’s Joni Jouhkimainen. Estonia’s Ranno “RukKuRuku” Sootla is in the middle of the pack, trailed by Malta’s Tom “Pik00rs” Delaine who reached his second final table of the festival. 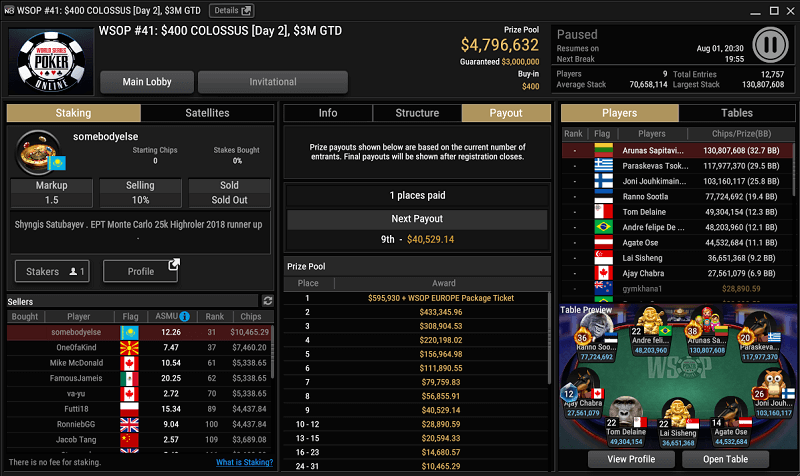 German superstar Fedor Holz went even further and made it to 28th place while Dario Alioto, Christine Do, Corey Hochman and Daniel Neilson were sent to the rail on the final two tables. In fact, it was the second 10th place finish for Neilson that day, as he finished in the same spot in Event #33.

Brazil’s bracelet winner Yuri Dzivielevski leads the final nine players ahead of Gaby Livshitz from Israel. Other notable finalists are Samuel Bernabeu, Chad Layne, Dustin Dirksen and Matt Vengrin. They all have $14,596.73 locked up so far, while the winner will take home $221,556.78 in cash and the added $15,000 WSOP Europe Package. 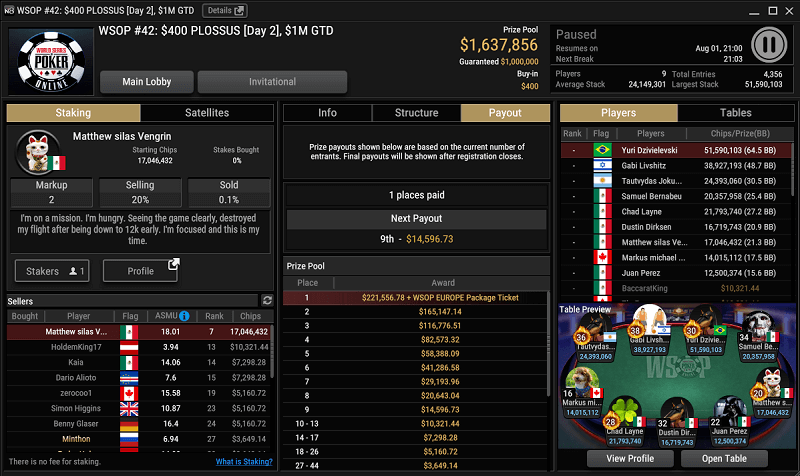 Both the COLOSSUS and PLOSSUS are scheduled to play down to a winner on August 1st with the action to be streamed on GGPoker.tv and PokerGO.