It’s an exciting time in the online poker scene, with the Caribbean Poker Party happening on partypoker as well as EPT Online 2020 currently running on PokerStars. It’s no different on the GGPoker Network (GGPN), with High Rollers Week (HRW) currently unfolding and offering events similar to EPT Online 2020, albeit with higher guarantees.

There are some other obvious differences between both high roller tournaments, as most HRW tournaments will be complete within 24 hours. The exception is the two editions of the Super MILLION$, which play down to a nine-handed final table before taking a break until the live-streamed showdown the following Tuesday.

PokerStars also has several one-day events with faster structures, but more than half of the 20 events on their schedule conclude over two days. The two flagship events: the $1,050 Arena Championship and the $5,200 Main Event, feature an even slower structure and play down to a winner within four consecutive days.

Guarantees and re-entries are also slightly different on both sites. On PokerStars, the re-entries are typically limited to a maximum of two whereas it is unlimited on GGPN. An advantage of this unlimited re-entry is that High Roller regulars can take more shots at glory, and thus bigger guarantees can be put in place.

How have both festivals done so far and who was among the latest HRW winners? Read on for all the latest poker news right here on Natural8, flagship operator of the GGPoker Network.

The First Super Sunday and Monday at a Glance

The first Super Sunday featured multiple events on both platforms, with the $1,050 NLHE tournaments both featuring a guarantee of $1.5 million. On PokerStars, the Arena Championship drew 2,426 entries and a prize pool of $2,426,000, whereas on GGPN the GGMasters High Rollers came up short of its guarantee with just 1,325 entries.

A champion is to be crowned on PokerStars today as the slow structure has whittled down the field to the final nine, whereas Paraskevas “Cantaloupe7” Tsokaridis already has the first ever HRW title to his name.

Pot-Limit Omaha specialist Aku Joentausta was involved in both $10,300 PLO High Rollers, and narrowly missed the final table on PokerStars. He made up for that by taking down a 124-entry strong field for $271,790 on GGPN. One day later Ka Kwan “kaju85” Lau topped a field of 70 entries on PokerStars for $188,937.

Both Mikita Badziakouski and Daniel Smiljkovic are no strangers to the GGPN final tables and enjoy success quite frequently. Both also earned a title the last few days in the EPT Online festival, with Smiljkovic almost making it two victories.

The two-day EPT Online Event 06: $10,300 NLHE 8-Max High Roller saw 109 entries, with Matthias Eibinger dominating the action. Badziakouski was the shortest stack on the bubble, but advanced to the final day. He then ran up a stack and chopped with Eibinger. Both decided to flip pre-flop until one had all the chips, and Badziakouski walked away as the winner for $222,453. Eibinger received $221,564.

Further Winners in the HRW Tournaments 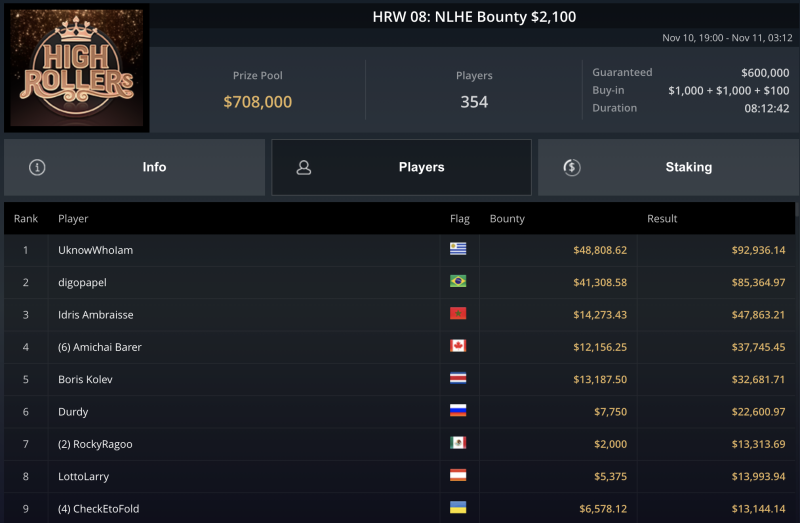 On November 11th two HRW events played down to their respective winners, both of whom are well-known in the poker community. HRW #09 $2,100 NLHE attracted a field of 317 entries, and the $634,000 prize pool was split among the top 44 finishers. Ivan Galinec ended as the bubble boy, securing a payday of $4,680.56 for all remaining hopefuls. 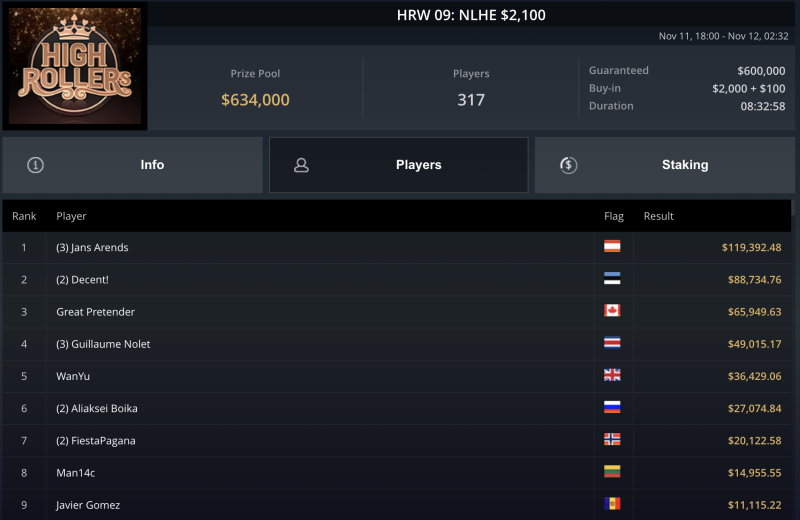 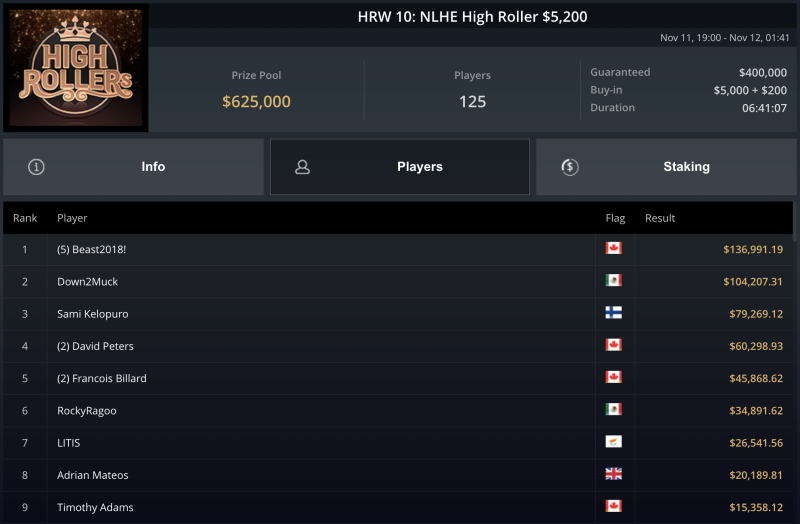 The final table of GGPN’s weekly flagship high-stakes showdown was already set on Sunday, and nine players out of 291 entries returned to the live-streamed final on Tuesday. Canada’s Kyle Menard began the day with the lead and even though several other players held the top spot at some point, it was Menard who walked away with the top prize of $628,892.

Only five players remained on the first break, after the three table short stacks and Fany “fab5” Auge departed in quick succession. Adams ran with queen-jack into the ace-king of Colpoys and found no help, but Colpoys would be next to bust. Philippe D’Auteuil jammed ten-nine suited for a pair and open-ender on the turn, but Menard snap-called with a set of eights. Ultimately, Menard prevailed in a short-lived heads-up against Pärssinen when the kicker played. 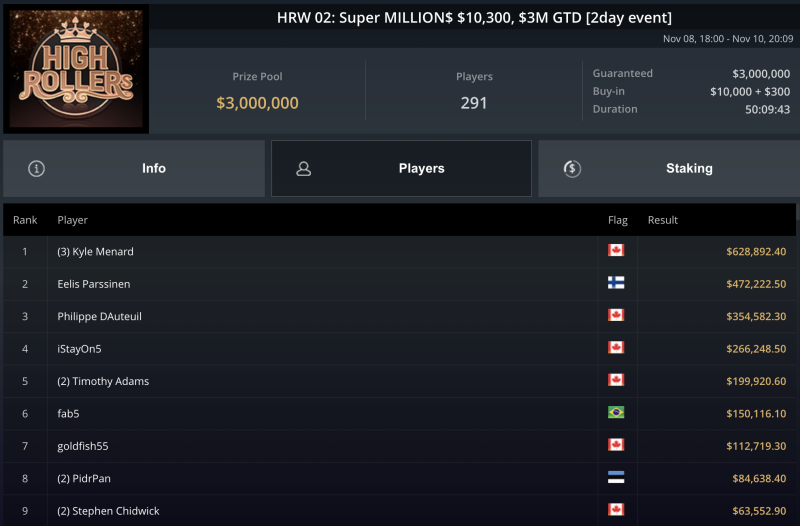 Last but not least, another one-day High Roller event was the HRW #07 $10,300 NLHE High Roller which came with a guaranteed prize pool of $1.25 million. A total of 130 entries ensured the guarantee was surpassed, and the top 15 players paid.

2019 WSOP Europe Main Event champion Alexandros Kolonias ended up as the bubble boy, and among those to bust prior to the final table were Andras Nemeth, Chris Klodnicki, Mike Watson, and Viacheslav Buldygin. Adrian Mateos and Bertrand “ElkY” Grospellier busted at the same time on two different tables, which set up an eight-handed final table.

Bert Stevens drew the first blood, and further notables that hit the rail were Natural8 Team Bling member Daniel Dvoress, Isaac Haxton, Mark Radoja and Dan Smith. Down to the final three players, Julian Stuer had taken over the lead. His open-jam with eight-five was called by Kenneth “rebuyguy” Smaron with ace-jack and Stevens with kings. The cowboys held up and Smaron was eliminated in 3rd place for $175,106.23.

Stevens and Stuer then agreed on deal numbers, and it was Stuer that came out on top to earn $264,635.90. Stevens continued his heater on the GGPN and recorded another major cash for $262.470.16. 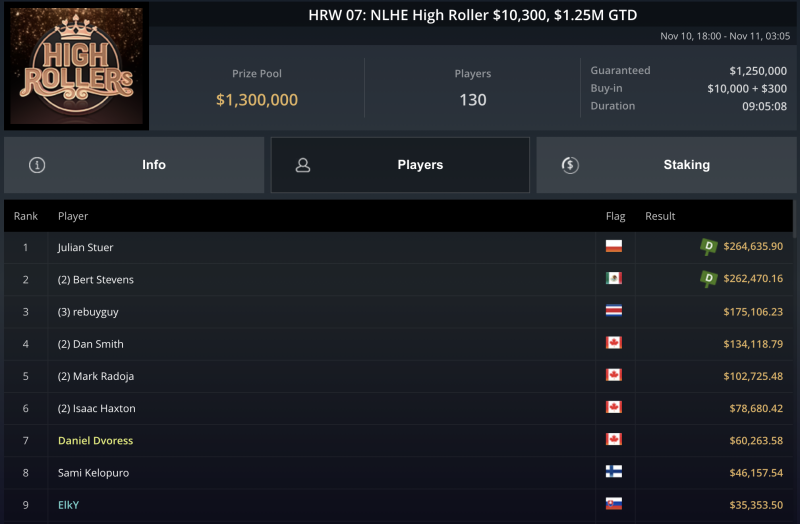 10 out of 20 HRW Events are already completed and the next major highlight for both operators is a $25,000 Super High Roller. PokerStars offers a guarantee of $2 million for their two-day event, while the one-day HRW edition will feature a prize pool of at least $2.5 million.