Next Millionaire Crowned At the GGSF High Stakes Poker Tables

The 2021 GG Spring Festival has all but reached the home stretch and it’s time to take a look at some of the high stakes tournaments of the penultimate Sunday. With more than $20 million in guarantees, it was the busiest day of the entire online poker festival so far and some of the High Roller events resulted in massive paydays. That included the next seven-figure paydays in the Super MILLION$ Main Event and final edition of the $25,500 Five Million.

After a week of Day 1 tournaments, both the GGSF Headliner Events concluded on Sunday, April 18th and both of them managed to cover their guarantee.

The $400 PLO-NL edition saw 2,671 total entries of which 451 players qualified for the final day. Despite the budget buy-in, several top pros reached the seven-handed final table and among them was Natural8 Team Hot ambassador Kosei Ichinose. Ami Barer fell in fifth place for $34,829.51 and Ichinose was the next casualty and collected $48,172.22 for his efforts.

That left three known Omaha aficionados in contention and Rui Ferreira had to settle for third place which came with a payday of $66,626.42. Mads Amot from Norway cashed for $92,150.19 and WSOP Online bracelet winner, Connor Drinnan earned another victory on the GGPoker Network to score the $127,453.33 top prize. 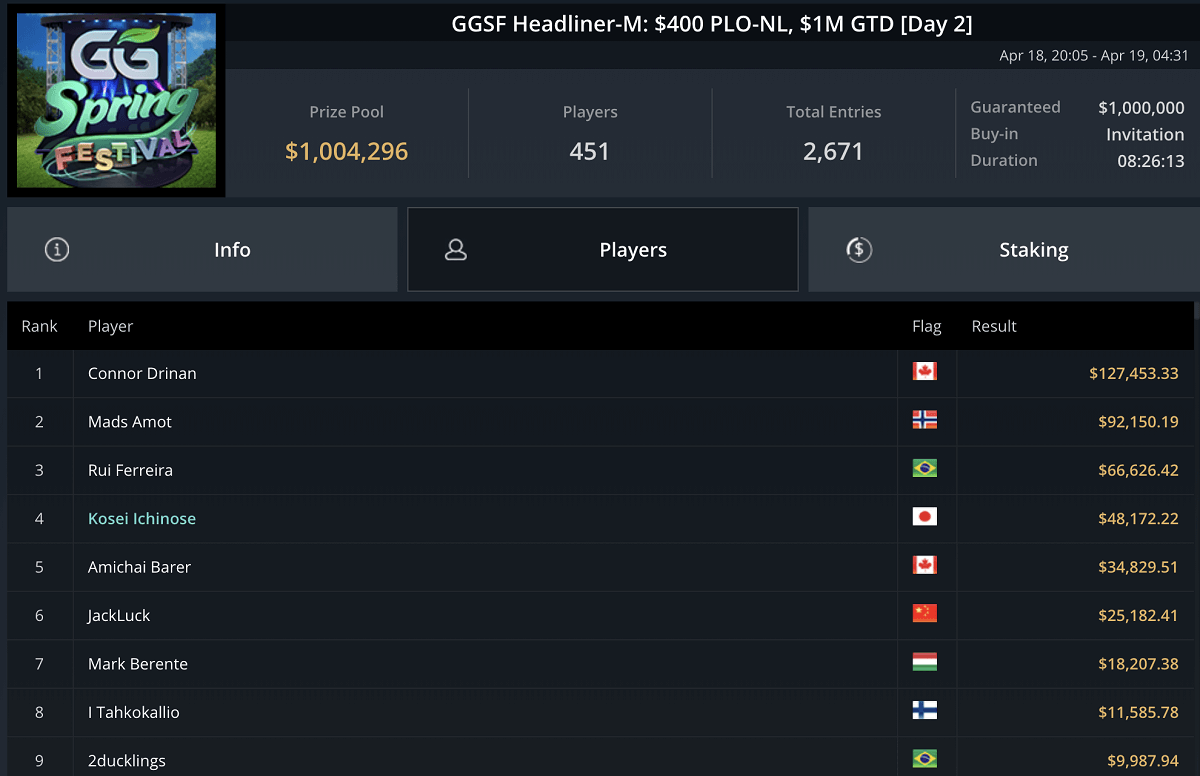 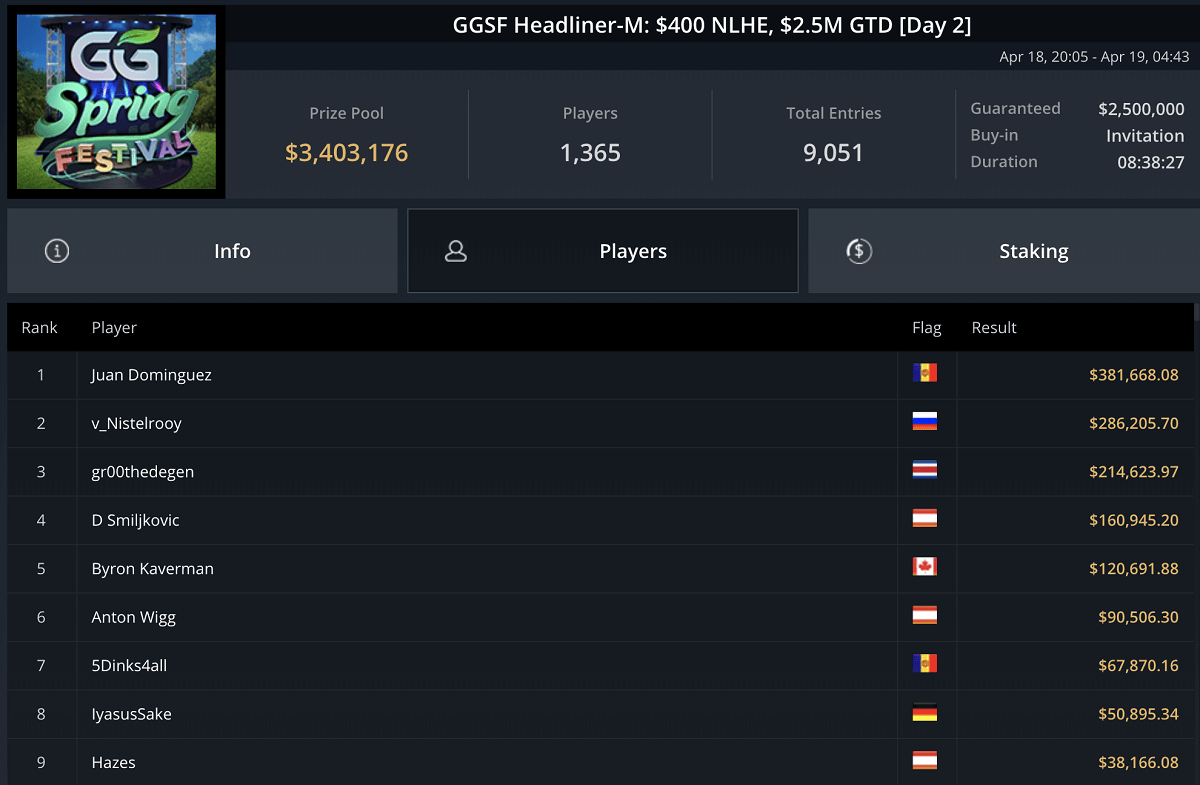 Another Natural8 ambassador made a deep run on Sunday and that was Taiwan’s Pete Chen. He needed four bullets in Event L-74: $250 Sunday Main Event but his persistence paid off. Out of a field of 2,928 entries and after nearly 12 hours of play, Chen finished second for $59,779. WSOP bracelet winner Barak Wisbrod was the one hurdle that proved too much for Chen as Wisbrod claimed the top prize worth $79,719.12. 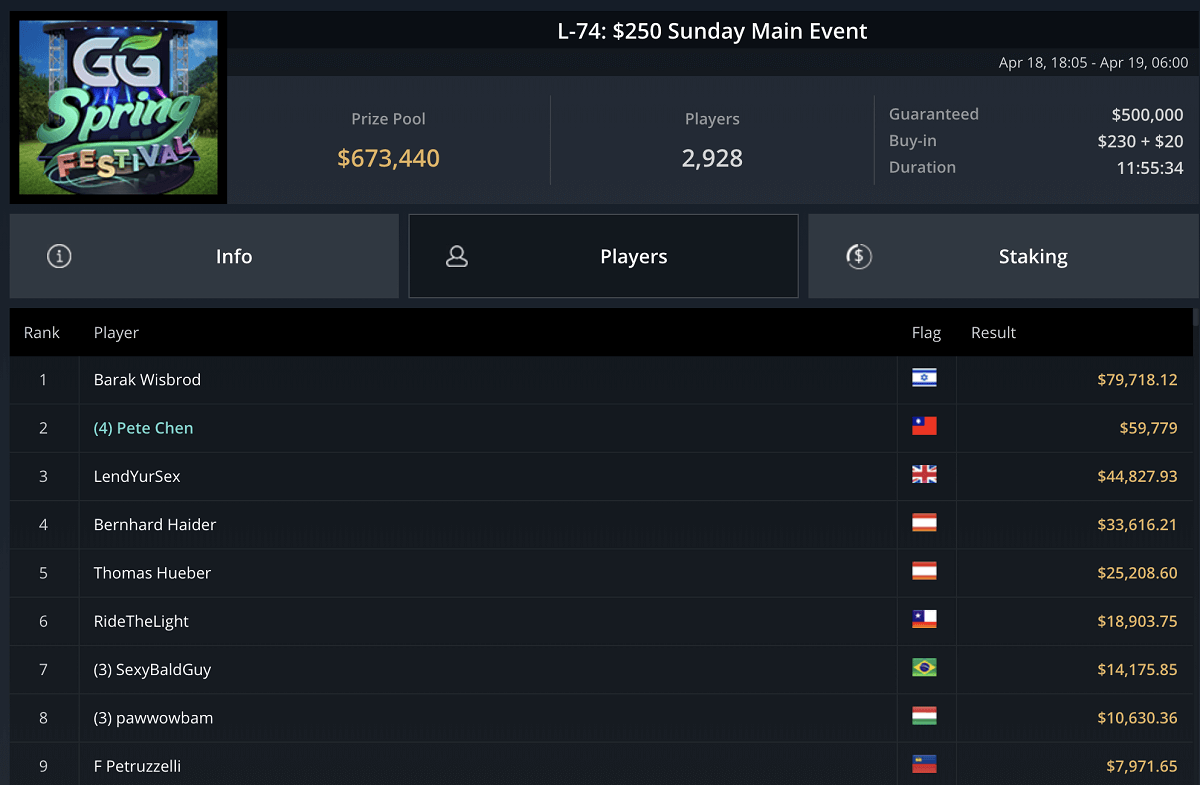 Other Seven-Figure Prize Pools on Sunday

Fast forward to Monday, the second edition of the Sunday 5 Million concluded. Day 1 of Event H-75 with a buy-in of $25,500 was the biggest tournament so far with such a price tag as it drew 208 entries. Day 1 played down to the nine-handed final table and the top 31 finishers earned a portion of the $5,200,000 prize pool.

Ioannis Angelou-Konstas ended up as the bubble boy and the field was then decimated in rapid fashion with the likes of Eelis Pärssinen, Jason Koon, Dan Smith, Seth Davies, Lev “LevMeAlone” Gottlieb, Stephen Chidwick, David Peters, Yuri Dzivielevski and Christian Rudolph all among the casualties in the money.

Elio Fox bagged up the most chips narrowly ahead of Mikita Badziakouski and it was the latter who dominated the final table. Badziakouski knocked out six of the eight opponents while Fox busted two. The lead of the Belorussian was overwhelming in the late stages and he wrapped it up in under three hours. Among his victims was also Natural8 High Roller Michael Zhang, who fired six entries and bowed out in ninth place for $110,567.86. 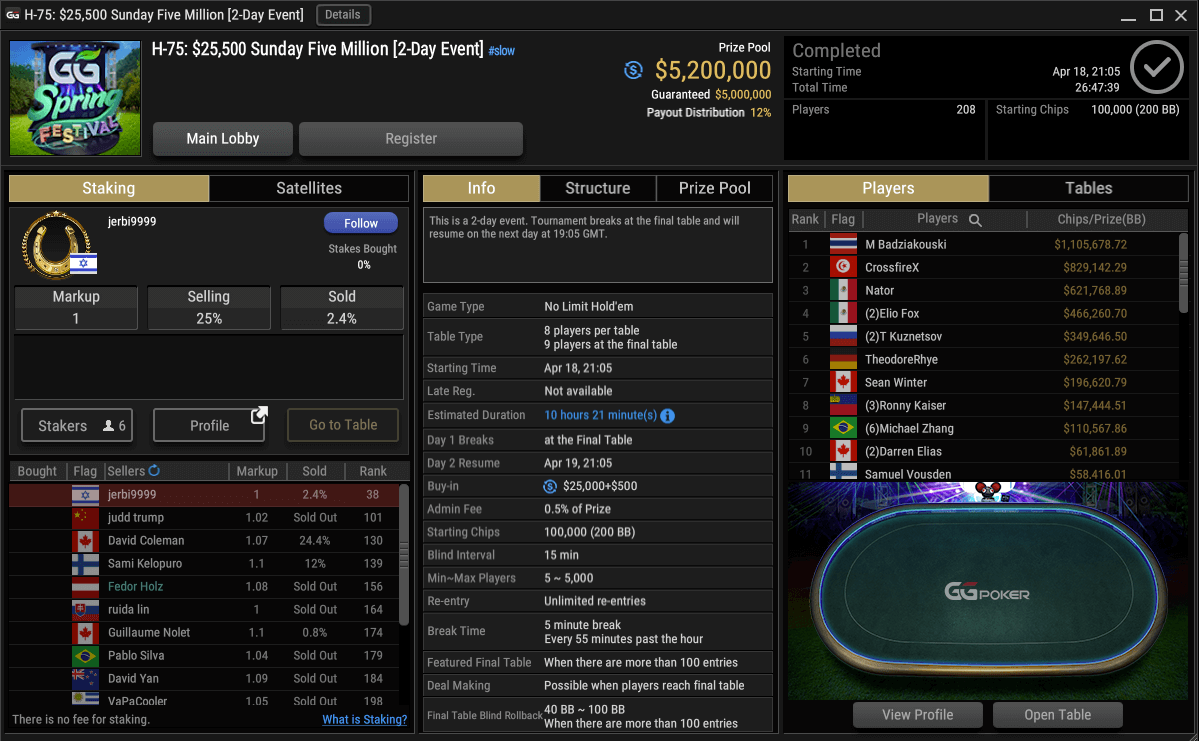 Andersson and Watson Among Big Winners on Tuesday

Tuesday also saw the conclusion of the record-breaking $10,300 Super MILLION$. The special edition of the weekly high-stakes contest drew a staggering 1,089 entries in the second time the tournament boasted a $10 million guarantee. This time, the prize pool went up all the way to $10,890,000 and some of that was already paid out on Sunday when the money was reached.

Only 156 players had returned on Sunday after making it through the five starting days and the top 125 finishers walked away with at least $24,762 for their efforts. As can be expected, that included a plethora of superstars but once the dust had settled, it was Joakim Andersson at the top of the leaderboard.

The former Super MILLION$ winner also dominated the final table and sent six opponents to the rail. He only dropped out of the top spot for a few minutes to defeat Julian Stuer in second place. Andersson earned $1,537,605 for the efforts while Stuer also ended up as a millionaire with $1,185,655 to show for.

One Natural8 player was among the finalists. Stevan “Steve Austin” Chew had qualified through a satellite and then laddered on the final table to score a massive $704,996 payday. 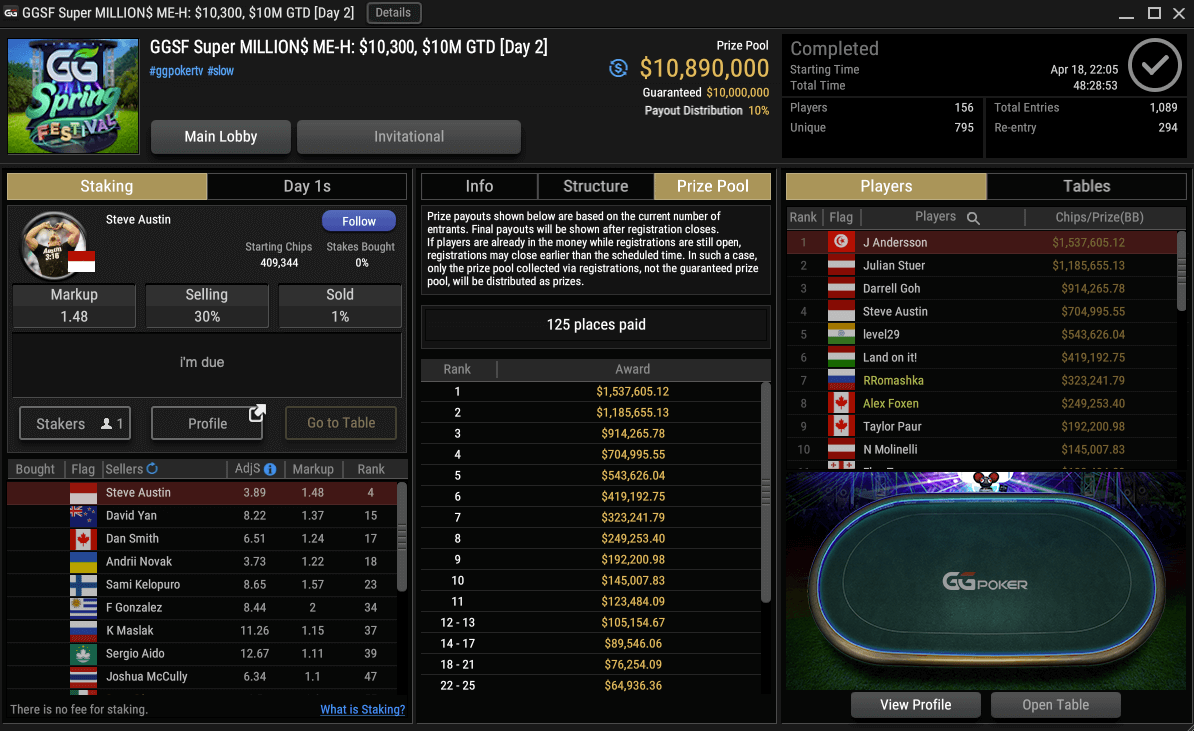 Last but not least, Tuesday also featured Event H-83: $10,300 Super Tuesday. Once more the biggest names in the world of poker assembled and 182 entries resulted in a $1,820,000 prize pool. Only the top 27 spots were paid and Sami Kelopuro was the bubble boy this time around. Daniel Dvoress fell in 20th place for $19,341.31, having fired three entries.

Big names such as Fedor Holz, Andras Nemeth, Kristen Bicknell and Rui Ferreira narrowly missed the final table. Eight of the last nine players were wearing the Canadian flag but only four of them hold the nationality. American pro David Peters fell in third for $223,398.23 and Mark Radoja then cut a deal with Mike Watson. It was Radoja who subsequently finished in second place for $333,213.42 while Watson padded his bankroll with $361,957.35. 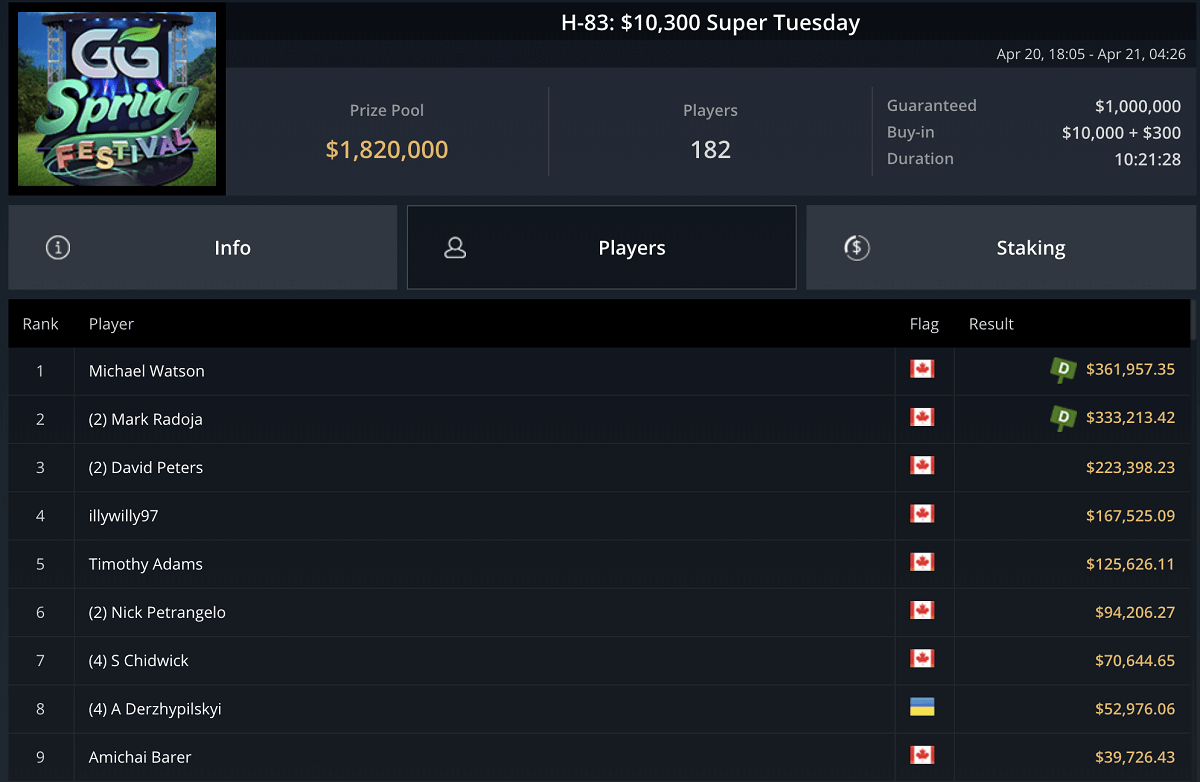 It will be another big week on the GGPoker Network as the highly anticipated $1,500 NLHE Main Event will play down to a final table. Starting flights were underway all week long to earn a shot at the $10 million guarantee. The $1,500 PLO-NL Main Event will likewise pay out at least $2 million in prize money.