May 2020 could very well have been the busiest month for online poker in years, with numerous record-breaking tournaments taking place on major poker sites. Among them was the first-ever World Series of Poker Super Circuit Series 2020, which promised $100 million in guaranteed prize pools across all designated tournaments from May 3rd to May 31st.

That number was ultimately crushed as more than $130 million in prize pools were awarded to poker enthusiasts from all over the world. All 18 WSOP Circuit ring events easily crushed their guarantees and more than $47 million in cash prizes were paid out.

There were 18 individual winners, and four players made it to the final table twice: Monaco’s “Gius2020”, Canada’s “HowdyTeeexas”, Uruguay’s “tepuseenFD” and India’s “Igutu”. Each one also finished as runner-up once.

“Igutu” placed second in Event #1 COVID Charity and went on to finish third in Event #17 Main Event, for more than $800,000 in cash prizes. The charity event drew a total of 1,595 entries and $111 of each buy-in, totaling $175,000 altogether, went towards the Nevada Community Foundation’s Covid-19 Emergency Response Fund. 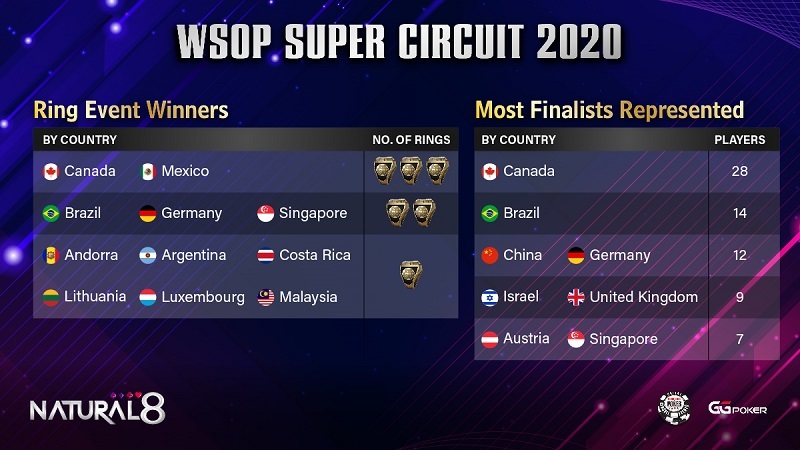 It came as no surprise that the most successful countries also wielded the most contenders, on otherwise very international final table line-ups. It was the Canadians that showcased their talents on the Pot-Limit Omaha tables as three of them reached the final six in Event #10 $10,000 PLO High Roller Event. Four out of six Canadians also emerged in the finals of Event #16 $1,000 PLO Main Event.

Brazil achieved similar feats with four players among the final nine in Event #5 BIG $500. They ended up establishing a trifecta at the top, with Rodrigo “BlaireauEnColere” Seiji crowned eventual champion.

Most Finalists Represented by Country

A total of four players walked away with seven-figure paydays, three of which came from the highly anticipated Event #8 High Roller Championship. A total of 505 players ponied up the $25,000 entry fee to create a prize pool of $12,372,500 and among the top three was well-known British poker pro Patrick “Babu$hka” Leonard. 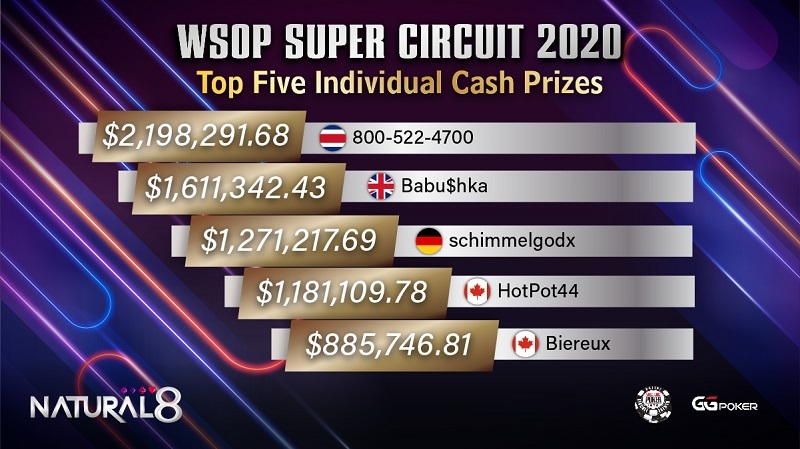 Another millionaire was crowned in the flagship tournament of the entire festival Event #17 Main Event. Thanks to 9,779 entries, a prize pool of $9,290,050 emerged and Germany’s “schimmelgodx” took home the elusive WSOP Circuit ring, a massive top prize and a seat to the WSOP Global Casino Championship.

Close Race in the Overall Leaderboard Until the End

The final day saw four tournaments play down to a champion and also concluded the ring event leaderboard, which turned out to be a very close affair between Justin “PetitFoxx” Zhu and Craig “Goblue” Varnell in the unofficial final standings.

Zhu was the early front runner after taking down Event #3 Deepstack Bounty Hunters and making it to 77th place in Event #17 Main Event to cement his bid for the top spot. Varnell was in the money for 11 out of the 18 WSOP Circuit ring events but needed to fire three bullets in the final tournament to give himself a shot at the overall leaderboard. In the end, he clinched the title in Event #18 The Closer for his third WSOP Circuit ring.

Two-time finalists “Igutu” (4th place) and “tepuseenFD” (7th place) also ended up in the provisional top 10 of the leaderboard, but Varnell ultimately came out on top by a close five points.

Big scores emerged in the five $25k High Rollers events, but it was American poker pro and High Roller regular Seth Davies that earned the largest prize of $487,215.42. On the final day, Isaac Haxton recorded a payday of $456,764.45 while other familiar faces such as Laurynas Levinskas, Dario Sammartino, Andras Nemeth, and Matthias Eibinger also ended the festival on a high.

Natural8 would like to thank all players for their participation in the WSOP Super Circuit 2020. Due to all the enthusiasm and support, the event saw guarantees easily smashed and more than $132 million in prize pools awarded. Natural8 players can also look forward to an exciting month in June, with new promos like the Rush & Cash Daily $33,000 Leaderboard, Spin & Gold Weekly $100,000 Race, All-In Or Fold Daily $10,000 Flipout and the Short Deck $5,000 Daily Leaderboard, all of which culminate in a combined total of $2 million in promo giveaways.