The first-ever Asian Poker Tour Online champion has been crowned and it was no stranger to the Asian live poker circuit that came out on top. On the lead up to the $500 Main Event, the guarantee was already surpassed with three flights to go and a field of 1,217 entries boosted the prize pool all the way up to massive $578,075 with the top 170 spots paid.

In under six hours, a returning field of 320 Day 1 survivors was down to a champion as “DblBarrel” defeated Austrian high stakes regular “Olekonjole” in heads-up for a payday of $91.353.53 and skyrocketed to second place in the APT Online Series leaderboard.

Among the notable side event winners were former Asia Player of the Year Pete Chen, Ho Bao Qiang, and Simon Burns, a British poker pro that has become a regular on the Asian live poker circuit.  Five players earned their second titles and that subsequently vaulted them into the top 10 of the leaderboard.

“tikkapokka” from Finland won Event #24 $100 Short Deck and a much bigger payday then came as a result of his victory in Event #32 $1,000 High Rollers. The initial guarantee was more than tripled thanks to 117 entries and the Finn scored $24,362.59 for his second win of the series.

Last but not least, Dicky “Floatingworld” Tsang also shipped a second trophy. He was among the winners on the opening day of the festival already and then defeated a field of 204 entries in Event #33 $200 NLHE for $7,460.25 to become a contender for the leaderboard, in which he jumped to seventh spot. 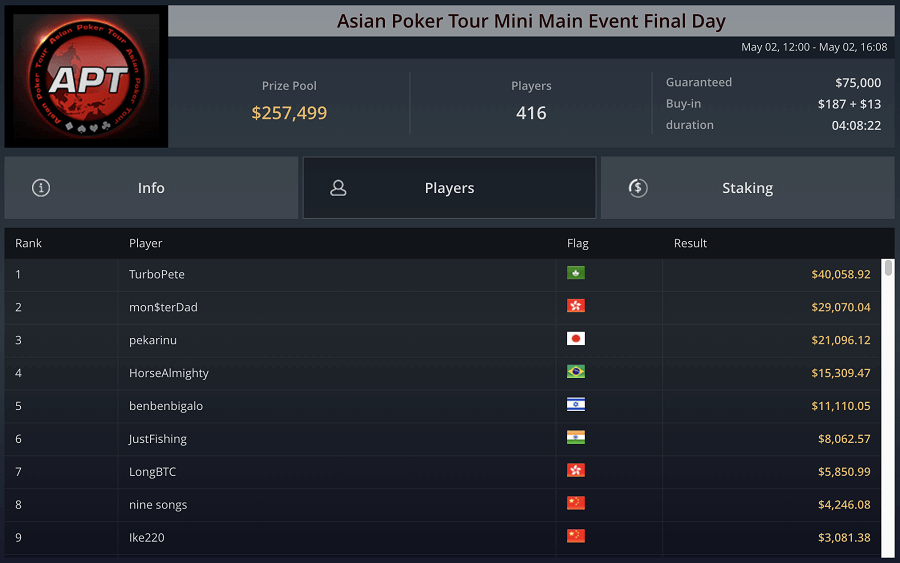 Pete Chen sits in fifth place on the current leaderboard and earned a huge chunk of the points tally for his victory in the $200 Mini Main Event. The event ran from April 30th to May 2nd and attracted a field of 1,299 entries. Of those, 416 qualified for Day 2 and 188 would earn their share of the $257,499 prize pool. Burns fell short of the final table and bowed out in 13th place while Chen and Lester “mon$terDad” Edoc highlighted the final nine.

Edoc dominated the action and sent several finalists to the rail as he took turns with Chen to decimate the field one by one. It was no surprise that both met in heads-up and Edoc held a sizable chip advantage. However, Chen doubled once with king-queen suited versus ace-nine suited and built a lead himself. The final hand was somewhat of a bad beat story for Edoc, who had his aces cracked by the flushdraw with nine-seven suited of Chen.