A busy week of high stakes action has concluded on the GGPoker Network (GGPN), and all but one event of the High Rollers Week has determined their champion. The flagship $10,300 Main Event has been whittled down to a final table of nine, and will play down to a winner on the usual live stream on Tuesday.

Let’s take a look at some of the key numbers for each event!

With a price tag of $25,000 to enter, the most expensive tournament of the festival was certain to attract the biggest names in the world of poker. The $2.5 million guarantee was surpassed thanks to 114 entries, and the top 15 spots received a portion of the $2,793,000 prize pool. Unfortunate bubble boy was Canada’s Guillaume Nolet, while all remaining contenders locked up a payday of at least $42,825.90.

Among those to fall prior to the nine-handed final table were Joao Vieira, Kenneth “rebuyguy” Smaron, Stephen Chidwick and Michael Addamo. With the eliminations of Sean Winter and Ami Barer in 9th and 8th place respectively, a five-figure payday was locked up.

Fedor Holz then bowed out in 7th place for $129,473.98. Brunno Botteon was out next after losing with ace-jack to ace-nine and the 2020 SCOOP Main Event champion Aliaksandr “winnerwsop” Hirs fell in 5th place.

Rainer Kempe found no help with ace-ten against the kings of Matthias Eibinger and took home $288,149.06. This was followed by the exit of Samuel “goldfsh55” Hunter moments later in 3rd place for $376,209.

Eibinger and Greenwood then agreed to a deal that saw the Austrian lock up more money. Unfortunately he lost the series of pre-flop blind flips to finish 2nd for $583,698.46. Greenwood secured a payday of $548.768.69 and the HRW title. 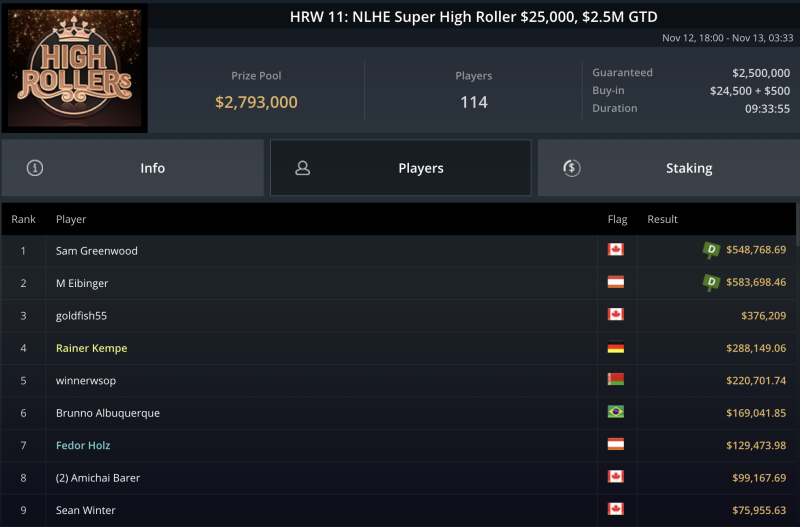 Three tournaments were scheduled to conclude on November 12th and 13th. 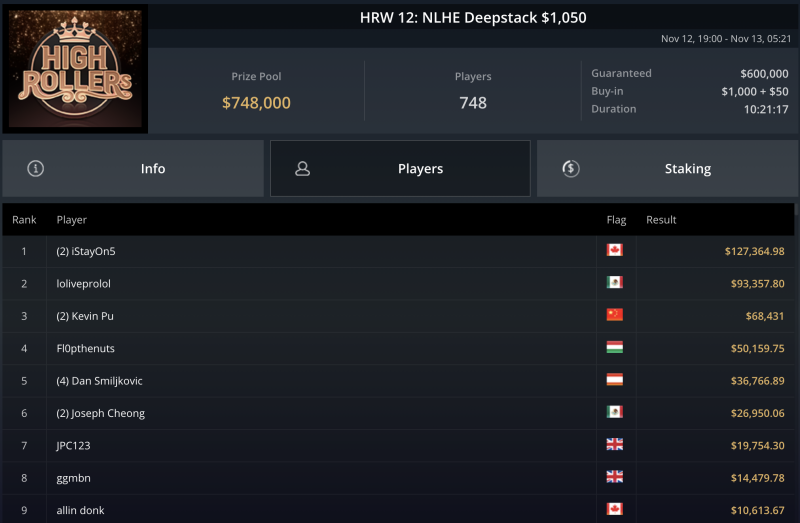 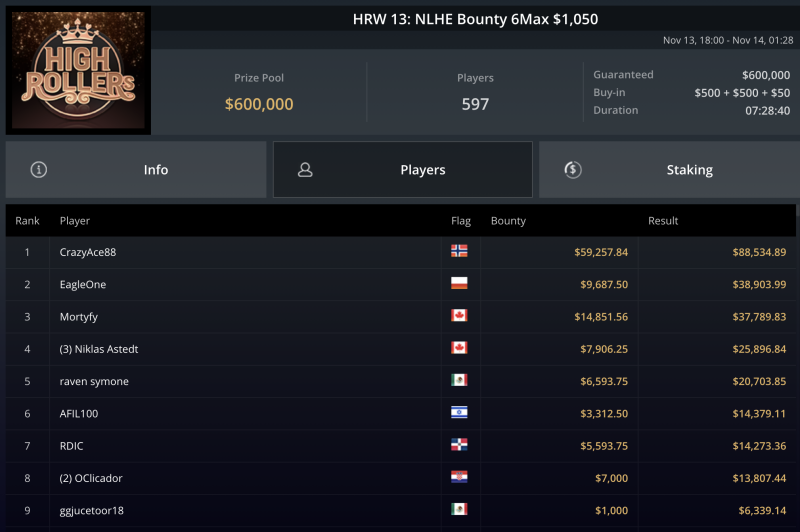 Sweden’s Niklas Astedt had already had some close calls, and racked up hundreds of thousands in cashes on the GGPN so far. He added a HRW winners badge to his virtual profile by taking down HRW #15 $5,200 NLHE High Roller. 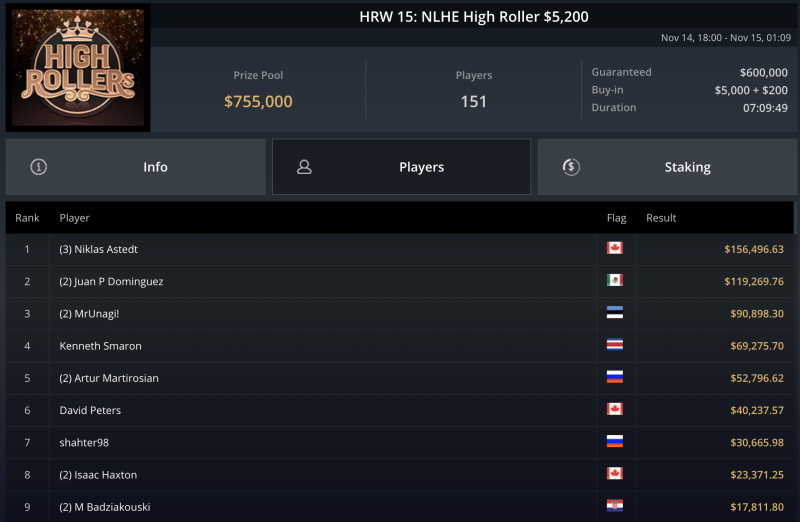 Julian Stuer then became the only two-time winner of the festival thus far, when he conquered a field of 93 entries in HRW #16 $10,300 NLHE High Roller 6-Max. Only 13 spots earned a portion of the $930,000 prize pool. Stephen Chidwick bubbled, while Steve O’Dwyer and Bert Stevens earned $23,250 but missed the final table.

Big names such as Viacheslav Buldygin, Natural8 Team Bling member Daniel Dvoress, Pardo Dominguez and Artur Martirosian were on their second final table of the night, while Ivan “zufo16” Zufic missed the podium. 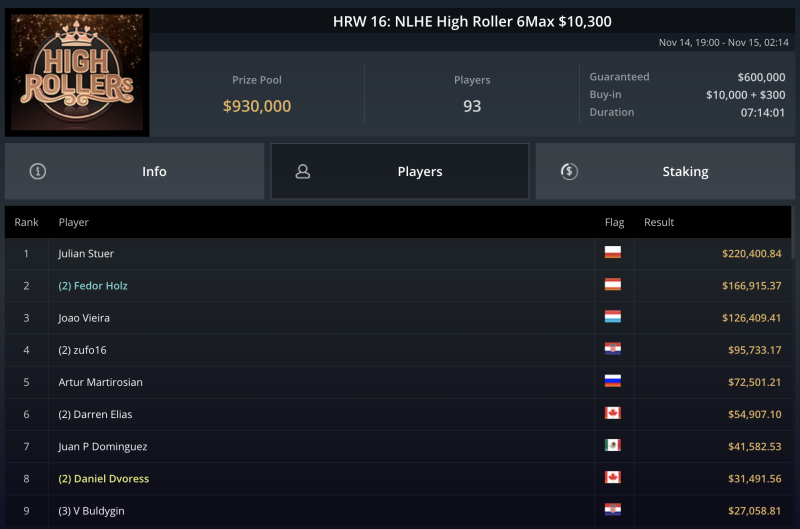 Four HRW Events were scheduled for the final day of the festival, and three of them have already crowned a champion.

Finnish high stakes regular Samuel Vousden added his name to the HRW winner’s list, after he came out on top of 1,131 entries in HRW #17 $1,050 GGMasters High Rollers. This event had missed its guarantee one week prior, and now created a prize pool of $1,131,000. 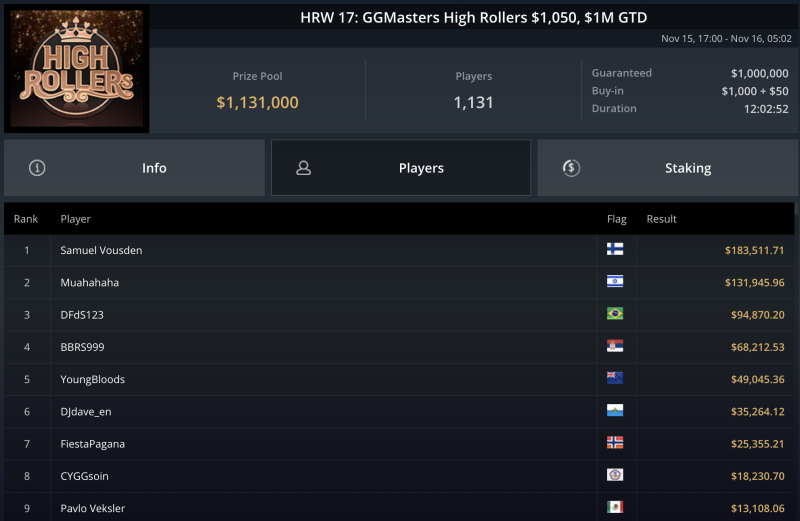 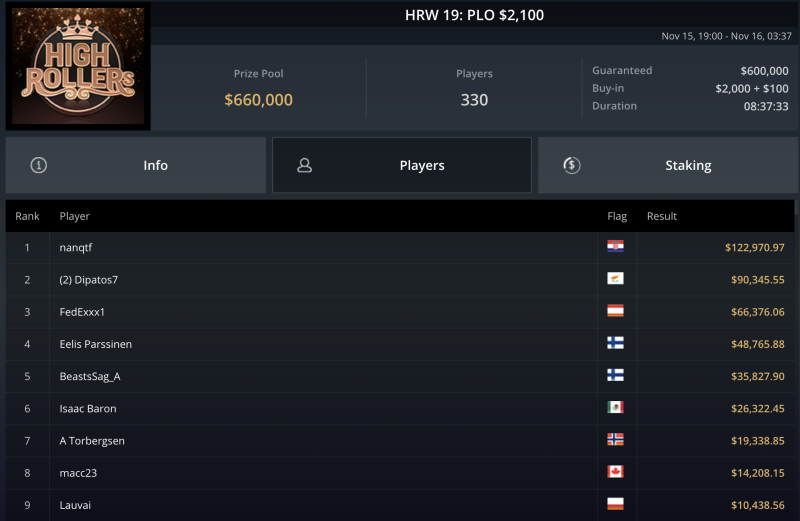 Brazil had two contenders in the final three, but Gustavo “Astor” Mastelotto ($42,170.17) and Rodrigo “digopapel” Semeghini ($65,393.45) both eventually settled for 3rd and 2nd place respectively. It was Fausto “Fantastik55” Tantillo, sporting the Albanian flag, who was eventually crowned champion and earned $99,022.18 in bounty and cash prizes. 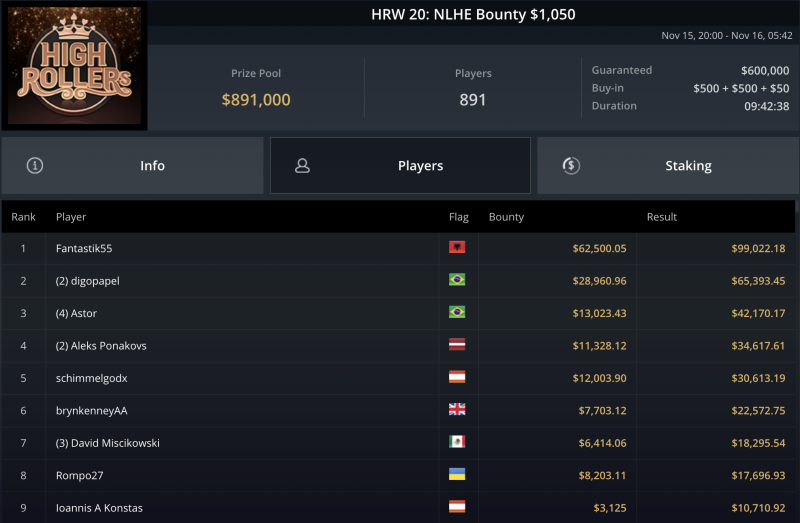 The flagship event of the entire festival came with a hefty guarantee of $5 million. Thanks to the unlimited re-entries, 581 total entries emerged and the top 60 finishers would all earn a portion of the $5,810,000 prize pool. Day 1 concluded with the elimination of Arthur “meiiYunqi” Conan, and David Yan stormed to the lead with a late surge which also included a double knockout right before that.

Yan has nearly 44 big blinds at his disposal, narrowly ahead of Davidi Kitai and Niklas Astedt. Aleksejs Ponakovs (10.6 big blinds) and Eelis Pärssinen (12.9 big blinds) are the two short stacks and have at least $161,097.35 locked up. Each pay jump will be significant and the winner is slated to take home a massive $726,830.43. 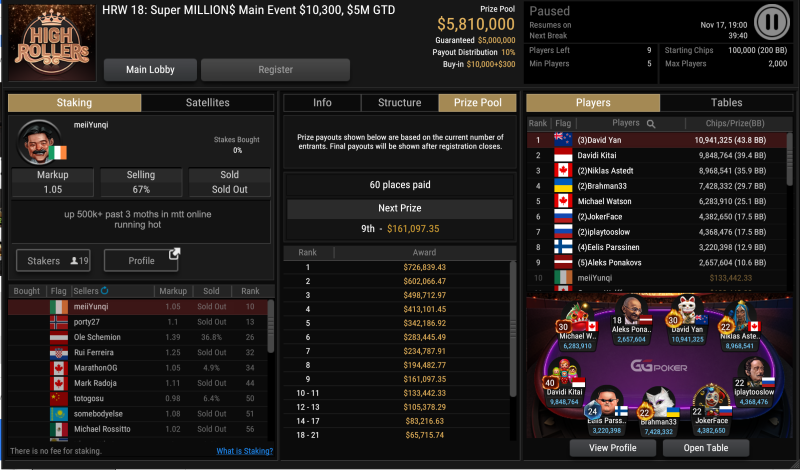