The Final High Roller Events in January on Natural8

Another busy weekend has wrapped up on the GGPoker Network (GGPN), with several big scores for Natural8 players such as Michael Zhang and Team Hot ambassador Bryan Paris. Below is a recap of the most notable High Roller tournaments on the final weekend of January 2021.

The final two days of January awarded hundreds of thousands in prize money to poker enthusiasts from all over the world. While popular series such as the Zodiac and High Rollers also ran on Saturday, the usual spotlight was on the $210 Beat the Pros.

It was a big turnout with 1,210 total entries. $242,000 in prizes were awarded to all those who knocked out an opponent in the PKO format or reached the top 170 spots. Felipe Ramos was among those who min-cashed and earned a $100 bounty prize.

Featured players “Crackdel29”, Luiz “Luizftorres14” Torres, “McAnz” and “PokerTussi” were ousted just outside of the top 100. Another eight featured players made it to the top 100 without reaching the final table, including Kevin Martin in 49th place and Jessica Teusl in 40th.

Two online streamers made it to the final nine. It was Scott “Pokerbrahs!” Kenyon who departed as the first casualty on the final table, taking home $2,323.94 in cash and bounties. Kevin “RotterdaM08” van der Koo bowed out in 4th place for a score of $8,949.11. Russia’s “Click_clack” topped it all for $26,367.35 with more than half coming from accumulated bounty prizes. 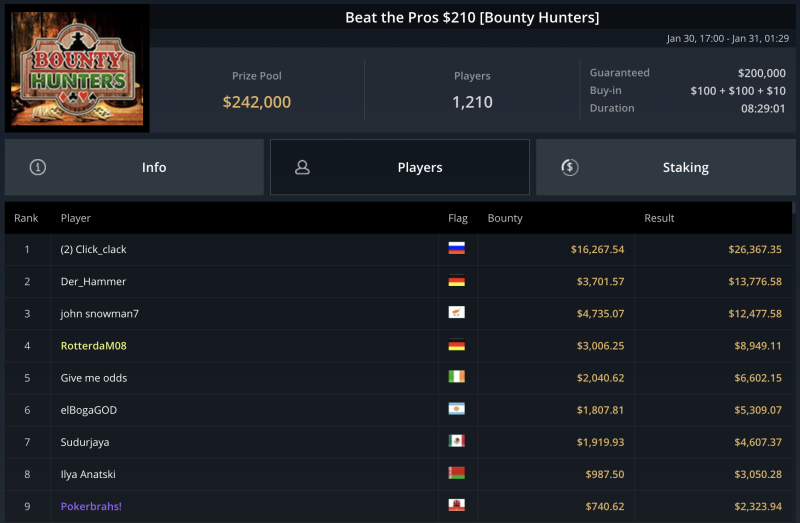 Aaron Thivyanathan was among the Saturday winners and came out on top of a field of 177 entries in the $200 Daily Monster Stack, banking $6,773.11 for his efforts. In the $300 Daily Marathon, Austria’s “Defthebest” confirmed his choice of alias in an 108-strong field and earned the top prize of $6,996.45.

The most expensive tournament on the Saturday schedule was the $1,500 High Rollers Deepstack, which drew a total of 62 entries. Only the nine-handed final table was paid - with Germany’s Arie Muller min-cashing, followed by Andrii Novak. Koray Aldemir managed to convert a third bullet into a small profit.

Three other known pros remained in contention. WSOP Main Event champion Damian Salas narrowly missed out on another victory, finishing in 2nd place for $16,118.62. Ioannis “Chitirijr” Droushiotis boosted his bankroll by $19,989.53 and can now rightfully claim to have defeated last year’s World Champion. 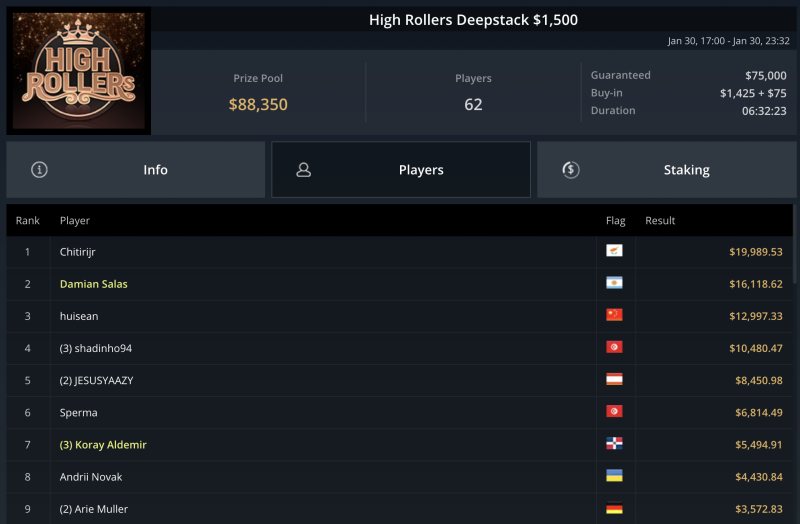 Aldemir reached another final table on Saturday and claimed $6,449.95 for his 4th place finish in the $1,050 High Rollers Main Event. Luigi “shadinho94” Shehadeh and Enrico Camosci made it to the podium, but it was Finland’s “Fiskars” who earned the biggest prize worth $15,295.30 on their third bullet.

Super Sunday in general is always the busiest day of the week, and December 31 was no different. All fields skyrocketed, with the flagship tournaments awarding the biggest prizes of the entire week.

The Sunday Monster Stack racked up 845 entries, and known pros to reach the final table were Georgios Zisimopoulos, Julian Stuer, and Viktor Ustimov. Tyler “TheRayGuy” Cornell came out on top and cashed for $21,823.36.

Among the more expensive High Rollers tournaments were the Blade series, which usually attract some of the biggest names in the online and live poker circuit. It all commenced with the $2,625 Opener as Daniel Dvoress, Connor Drinan, Bert Stevens, Elio Fox and Michael Zhang were among the finalists. Shawn Daniels eventually topped all 72 entries to take it down for $42,719.32.

Stevens bubbled the $5,250 Blade Opener as a field of 25 entries paid out the top four. Isaac Haxton min-cashed, while Ami Barer bowed out in third place. Brazilian superstar Yuri Dzivielevski finished 2nd for $34,286.43 and David Yan earned the top prize of $45,721.70.

MILLION$ and GGMasters At a Glance

The final January Super Sunday featured five events with a seven-figure prize pool, three of which played down to a winner the same day. The flagship freezeout event of the network - the $150 GGMasters, also wrapped up after approximately 11-and-a-half hours. It saw a huge field of 4,290 entries once more to create a prize pool of $592,020, with “Narwhale” topping it for a massive return of $65,675.78.

In the $1,050 GGMasters High Rollers, the $1 million guarantee was all but reached with 979 entries. It took more than 12 hours to determine a champion. Michael Zhang and Jans Arends were among the top five, and it was Guillaume Nolet who padded his bankroll with the top prize of $141,384.10. 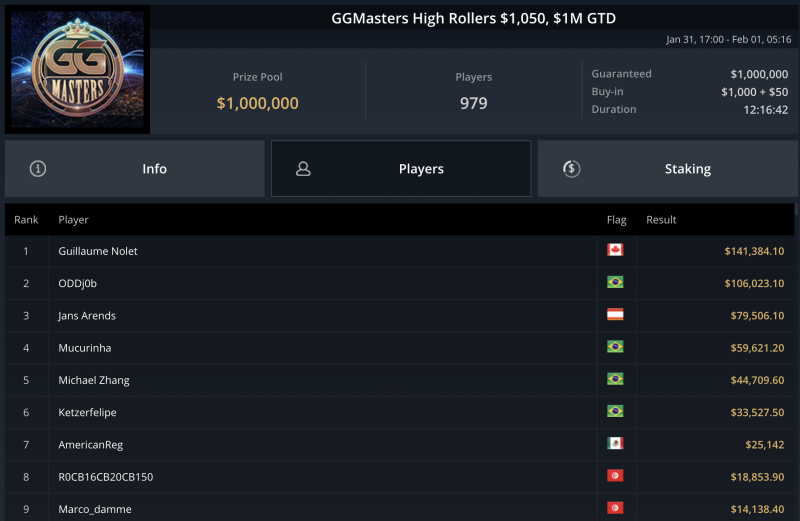 Both the $108 Global MILLION$ and the $525 High Roller MILLION$ fell short of their guarantees, providing extra value to all hopefuls who survived starting days throughout the week. It was a minor overlay for the former, which saw 9,929 entries. Germany’s “RunChicken” eventually took it down for $112,712.20 after beating 1,523 Day 1 survivors.

The High Roller edition was another close call, as 509 players out of 3,099 entries returned for the final day. Among them were former WSOP Main Event champion Ryan Riess and Natural8 Team Hot ambassador Bryan Paris, who both made the final table. Riess would bow out in 8th place for $27,848.37 while Paris made it all the way to 4th place for $88,064.27. 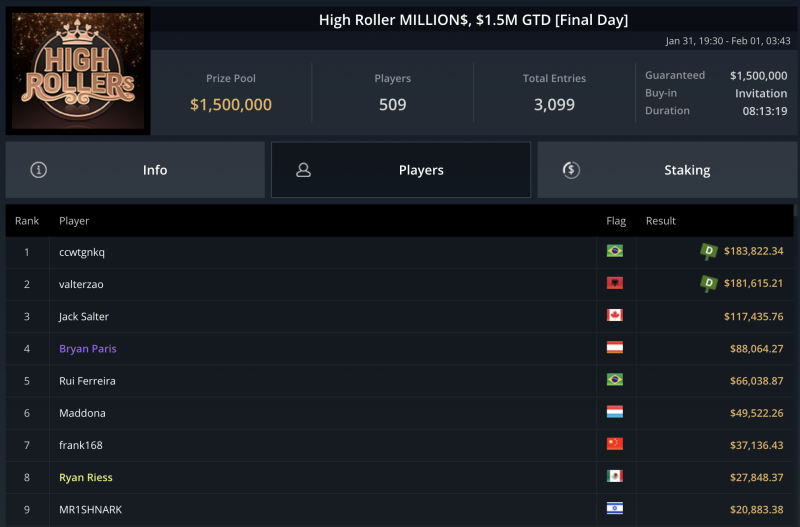 Isaac Haxton recorded a win in the $2,625 High Rollers Blade Closer, defeating Ami Barer in heads-up out of a total of 76 entries. Haxton fired four bullets and converted that into $44,541.60; Barer was in for three entries and cashed for $34,737.11.

With that, January wrapped up and February commenced with the introduction of the inaugural Asia Poker League Online Series.