June Promotions and Updates at Natural8

It’s Going To Be An Amazing Month At Natural8

June is set to be a great month for Natural8 players, with exciting new promos like the Rush & Cash Daily $33,000 Leaderboard, Spin & Gold Weekly $100,000 Race, All-In Or Fold Daily $10,000 Flipout and the Short Deck $5,000 Daily Leaderboard. That’s an eye-watering combined total of just about $2 million in promo giveaways.

Whether you’re new to the game or a major-league high roller, Natural8 offers an amazing First Deposit Bonus that boasts a fast clearance and no expiry. The 100% First Deposit Bonus is valid for deposits as low as $100, and up to $600. Bonuses are given out in $5 increments for every $20 of rake, so the more you play the more you get! Not only that, you can take your time to unlock to full bonus as there is no expiration date.

The Rush & Cash Leaderboard is back, this time with $33,000 up for grabs every single day. Players can also now choose between Hold’em and Omaha games, with separate leaderboards. There’s the usual 65% expected cashback in the form of cash drops and Natural8’s “Fish Buffet” loyalty programme.

New to Rush & Cash? This fast-fold format of poker sees players accumulating points for every action made during a hand. 2 points when you bet and 1 point when you call. You also get 3 points when you opt for All-In Insurance. Better still, points double when you play during Happy Hour (22:00-24:00 Pacific Time UTC-7).

Spin & Gold also has its own leaderboard, this one with $100,000 guaranteed each week. Players earn points by playing Spin & Gold and collecting “gold” based on how they rank. With 7 buy-in levels, including the introduction of the $0.25 stake, players will be spoilt for choice. There’s also an incentive to play on the weekends, with a significant 1.5x points boost on Saturdays and 2x on Sundays.

The previous All-in Or Fold Daily Challenge is replaced by the exciting new Daily $10,000 Flipout. $10,000 will be up for grabs each day, with an assortment of cash prizes, tournament dollars and sweet tournament tickets.

Players who play 100 AoF hands will be automatically registered to one of four daily Flipout tournaments. Play across multiple ranges and you could possibly gain entry to all four flipout tournaments. To even the field and reward participation, prizes will be randomly awarded. That means a player who places first and a player who places 100th both have an equal chance of winning big prizes!

Natural8 players who love a game Short Deck Hold’em (6+) can rejoice as we will be adding a $5,000 Daily Leaderboard. Players earn points for every hand played, with double points awarded during Happy Hour (22:00-24:00 Pacific Time UTC-7).

New to Short Deck? Similar to Texas Hold’em, players are dealt two cards in Short Deck. However these cards don’t come from a standard deck: the deck is 36 cards deep instead of the usual 52. Flushes are stronger than a Full House and every time players make one they’ll hit the Short Deck Flush Jackpot and get an instant payout. 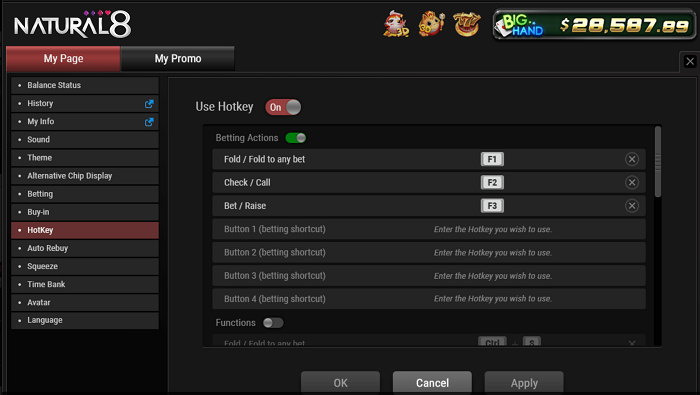