It’s been a busy week on the online poker tables of the GGPoker Network (GGPN), with the ongoing World Series of Poker Winter Online Circuit crowning another five champions.

We’re now more than halfway through the festival, and ten champions have been determined thus far alongside nearly $18.5 million in prize pools. 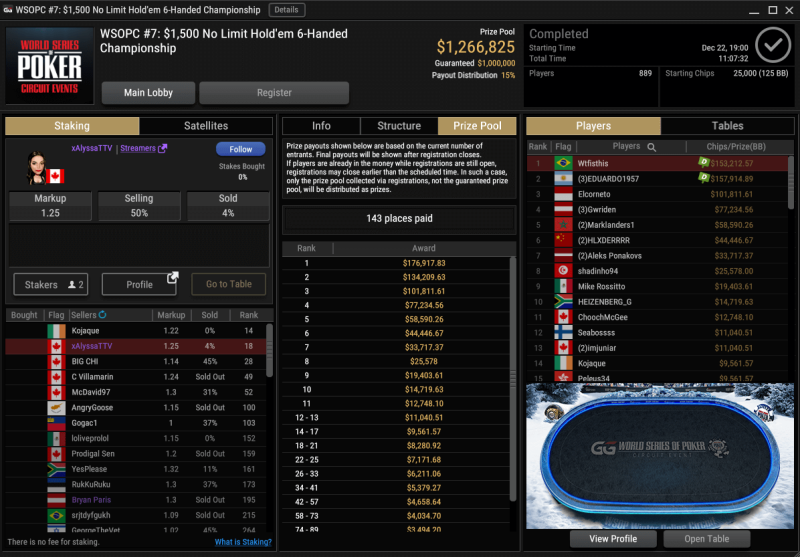 Russia’s “CallMeBatya” had fired 13 entries in Event #6 $170 Mini Main Event, and reached the nine-handed final table as chip leader. Having came close with a 17th place finish in Event #1 BIG $50, they rode to victory in the final live-streamed on Boxing Day. From a field of 17,478 entries, the nine contenders battled for their share of the $2,733,559 prize pool.

Hong Kong-based Robert “robdag83” Glasspool was among the early casualties and finished in 8th place for $36,974. “asky86” then jumped into the lead with the next elimination under their belt and a suddenly short-stacked “CallMeBatya” doubled. Ioannis Angelou-Konstas had to settle for 4th place and the surge of “CallMeBatya” continued when they knocked out Alessandro Siena.

“CallMeBatya” overcame a 1-2 disadvantage in heads-up against “asky86” to dominate the duel with aggression, and ultimately got there with ace-nine against ace-jack to seal the victory for a top prize of $277,277. “asky86”, who had won a seat through a $20 satellite, turned that into a $207,920 payday.

Boxing Day also featured another WSOPC Ring Event which took almost 13 hours to wrap up. Event #8 $600 Marathon drew a field of 1,264 entries and gathered a prize pool of $720,480. In the end, it was South Korea’s Seungmook “7high” Jung who came out on top after a fierce heads-up battle with Spain’s three-time WSOP bracelet winner Adrian Mateos.

Jung, who cashed nine times in WSOP Online 2020, earned a top prize of $96,714. Mateos had to settle for the runner-up spot and $72,524. Also featured with deep runs were Bruno “wisechinese1” Borges, Ajay “Ross_Geller” Chabra, and Austria-based German poker pro Jonas Lauck. Silvio “valterzao” Costa took 9th place and busted at the same time as “yoyoc” in 10th place, to set up an eight-handed final table.

One of the most affordable events of the entire festival was Event #9 $315 BOUNTY GIANT and the namesake of the tournament turned out to be entirely correct. An incredible 4,852 entries made sure that the guarantee was surpassed by more than 40% and $1,455,600 in cash prizes were up for grabs.

It was a frantic rush from start to finish. The only time no eliminations took place for more than five minutes was during the scheduled breaks and some periods on the nine-handed final table. Among those to reach the final five tables were notables such as Jens “Tankanza” Lakemeier, Dmitry “Altbbb” Yurasov, Jonathan “JonnyJamz” Kyriakides, Tyler “TheRayGuy” Cornell, and Roger Tondeur.

Poland’s “GROSZEK 5” led the final nine contenders at the top of the leaderboard but it was Estonia’s Urmo Velvelt who went from having the second shortest stack to the top spot. After an early double-up and a knockout, Velvelt assumed control and dominated the action.

Brazil’s “Dexman1” scored several eliminations and laddered to second place after Velvelt sent “GROSZEK 5” to the rail with a dominating pair versus pair showdown. Velvelt soared into an overwhelming lead, but allowed five double-ups in total until his king-six suited turned trips to beat pocket nines. As a result, “Dexman1” had to settle for $73,366 and Velvelt scored his biggest recorded cash for $115,036. 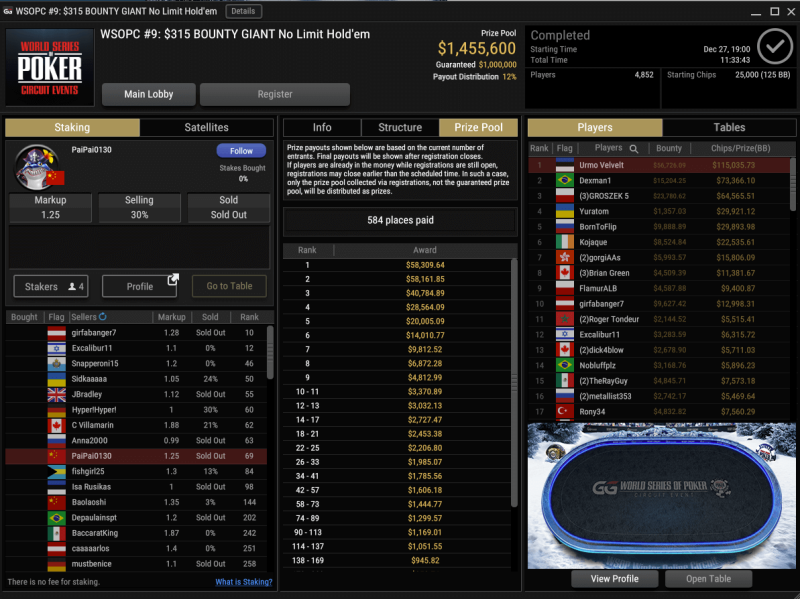 A late Christmas present was delivered to the remaining nine contenders in Event #10 $400 CHRISTMAS PLOSSUS, as they reached the final table after some seven hours on Day 2. Out of a field of 3,628 entries, 446 players survived their starting flight and battled for a share of the $1,364,128 prize pool.

Three WSOP bracelet winners are among the finalists including Chris Moorman, Tomas Ribeiro, and Team Bling member Anson “Tara@0z” Tsang. The first player from Hong Kong to earn the coveted gold bracelet entered his first event of the festival and needed just two entries to make it to 5th in chips.

Romanian player Cosmin-Ionut “cosmiNik89” Nica leads the pack ahead of Murilo “Fruble” Milhomem and will aim to collect the top prize of $178,921. All finalists have $17,892 locked up and the final table will play out on January 2. 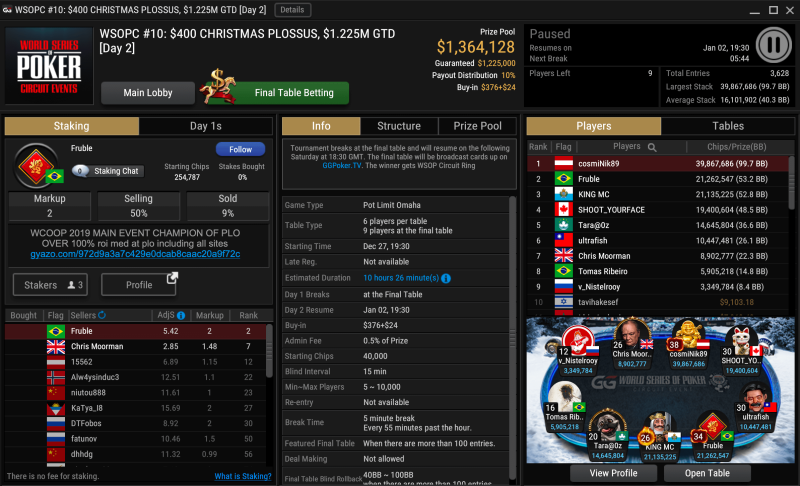 One further WSOPC Ring Event played down to a winner, as the only mid-week tournament wrapped up in some nine-and-a-half hours. A field of 1,293 entries in Event #11 $1,050 Bounty Hunters Championship paid out $1,293,000 in cash and bounty prizes.

Featured among the final five tables was Damian Salas who finished in 33rd place for $4,346.92 in prizes. Salas won the international leg of the WSOP 2020 $10,000 Main Event and will travel to Las Vegas for a heads-up against Joseph Hebert. Whoever wins will be crowned the 2020 World Champion.

Other notables that fell prior to the final table were Ajay “Ross_Geller” Chabra, Vlad Martynenko, Andras Nemeth, Rainer Kempe, Gary Thompson, Sparrow “FacelessMan” Cheung, and Simon Lofberg. It was a mad dash from three tables to one in under 20 minutes, and two finalists departed within the first three hands thereafter.

Dominik Panka hit the rail in 5th place for $35,072.34 in bounties and cash prizes. Oleg “Ad Astra” Vasylchenko dominated the late stages and then knocked out “Cindere11a”, Michal “houzhumi888” Wywrot and Marty “RetremntFund” Mathis en route to victory. His PKO bounty prize of $91,719.81 was bigger than the combined bounty awards of the 2nd to 11th place finishers. 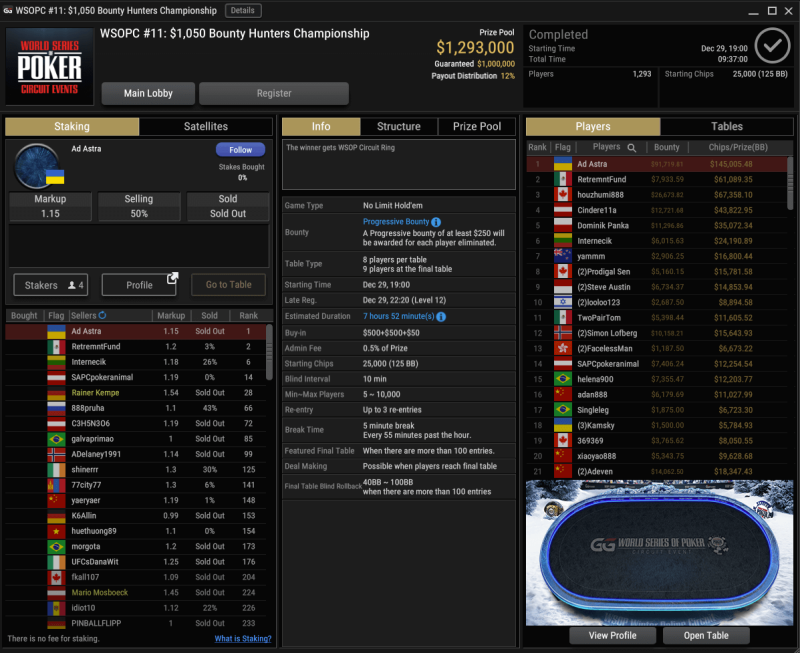