It was a busy Super Sunday on GGNetwork, as three events of the World Series of Poker Online 2020 ran simultaneously and the largest buy-in of the entire festival played down to a nine-handed final table.

True to its name, Event #69: $1,500 Marathon NLHE was indeed a marathon session – it took more than 13-and-a-half hours to whittle down the field of 1,438 entries to a champion. The final hand saw one player accumulate all the chips: American poker pro Nick “rdcrsn” Maimone who earned his maiden WSOP bracelet and the top prize of $302,471.86.

Ermo “PublicEnemy7” Kosk was the chip leader heading into the final table, but had to settle for 6th place. The remainder of his stack was sent over to Maimone, who proceeded to knock out three of his final four contenders in a topsy-turvy affair. He eventually closed it out as 3-1 chip leader when king-eight got there against ace-five thanks to a king on the flop. 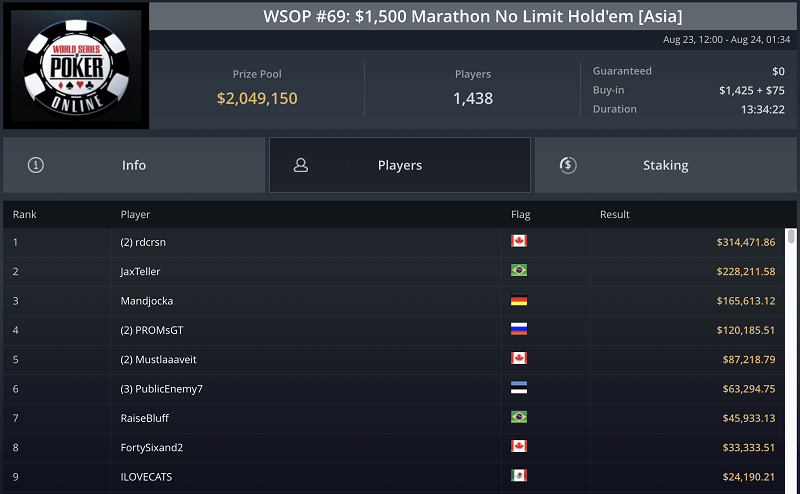 Among the top 206 finishers in the money were big names such as Craig Varnell, Stephen Chidwick, Chance Kornuth, Timothy Adams, Mike Leah, Jeff Gross and Anatoly Filatov. Daniel Negreanu added yet another cash to his WSOP resume and bowed out in 86th place.

The very start of the festival on GGNetwork produced the biggest WSOP event ever, in the form of Event #32 $100 The Opener which saw an unprecedented 29,306 entries. That record only lasted until this past Sunday when Event #71: BIG 50 played down to a champion.

Once the bubble burst, hopefuls hit the rail by the hundreds in quick succession. Along the way, Daniel Negreanu, Jack Salter, and online streamers Patrick Tardif and Kevin Martin all hit the rail. Jefferey “ReadyGambo” Jenkins, who had accumulated the most chips throughout all starting days, eventually fell in 28th place. 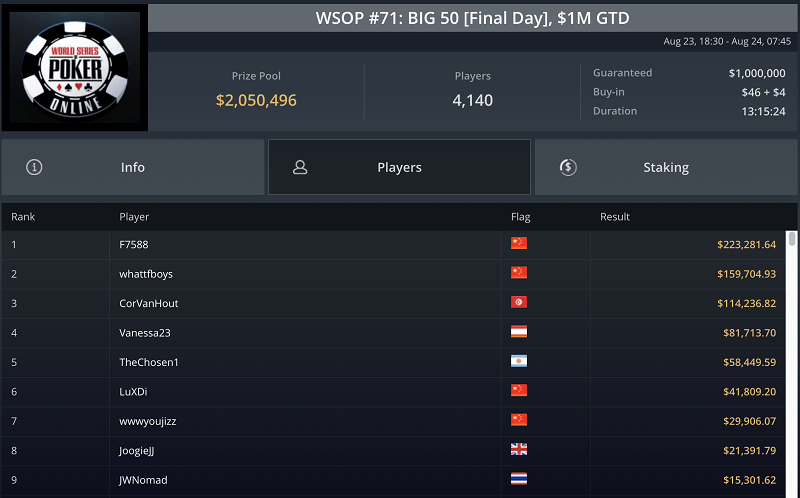 That left a Chinese duo to battle for the sixth WSOP bracelet for their home country, and it was Huahuan “F7588” Feng that eventually prevailed against Xue Qiao “whattfboys” Zhao. It was the first WSOP cash for Feng, who has more than $300,000 in cashes on the Asian circuit prior to this win.

The bar was set high for the most expensive tournament on the entire schedule, as Event #70: $25,000 NLHE POKER PLAYERS CHAMPIONSHIP came with a guaranteed prize pool of $10 million. Thanks to 407 entries in total, the gross prize pool was reached and the net one missed by just a few entries. 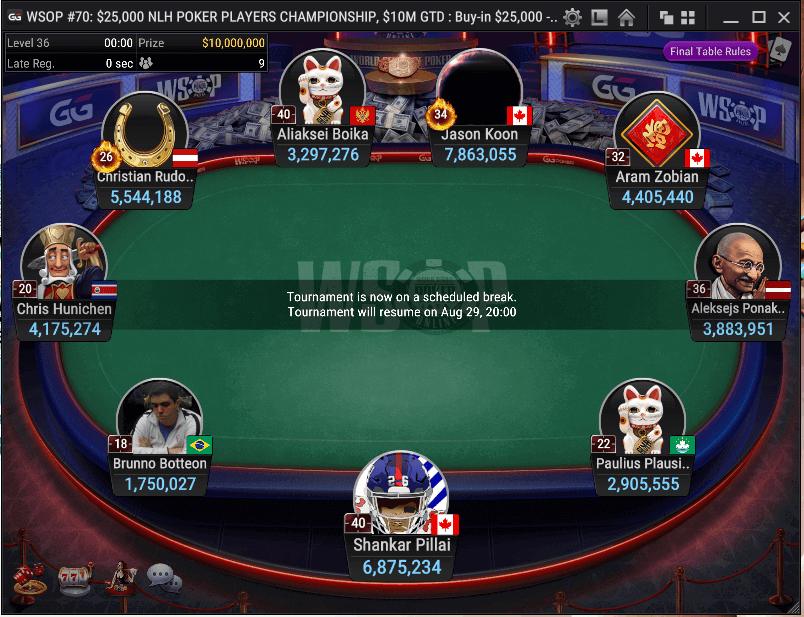 The biggest names in both the online and live poker world took part, alongside online streamers, High Roller regulars and shot-takers for the prestigious No Limit Hold’em showdown. Only the top 55 spots were paid, with Dan Smith falling short by two spots and two-time WSOP bracelet winner Michael Addamo running ace-jack into ace-king and bubbling.

From then on, there was barely a minute without an all-in and call for an extended period of time as the field raced down to the final three tables. Natural8 Team Hot member Thai Ha was among those that had to settle for a min-cash, as did Pascal Lefrancois, James Chen and football striker Max Kruse.

The next batch of casualties featured the likes of Derek Ip, Seth Davies, Sorel Mizzi, Timothy Adams, Dan Shak, David Peters and Natural8 Team Bling member Hun Wei Lee. On the road to the final table, Jason Koon built his stack with sheer aggression, and among his victims was John “Hamburger!” Thrower, who saw queens cracked by jack-eight.

Ultimately it was Jack Salter who became the last casualty of the day when he lost a flip with pocket eights against the ace-jack suited of Shankar “Saquon” Pillai. That pot sent Pillai up into second place right behind Koon, while other big names to be found on the nine-handed final table are Christian Rudolph, Chris Hunichen, and Aliaksei Boika. 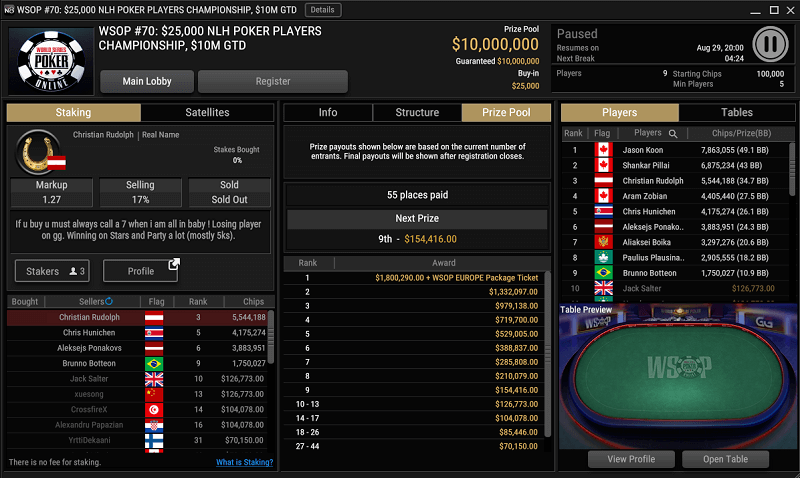 The final nine will be back on Saturday August 29th, to play down to a champion. The action will be broadcasted with cards-up coverage and commentary on the GGPoker.tv channel. All remaining contenders have $154,416 locked up so far, and a top prize of $1,800,290 awaits the eventual winner.

The second and final Limit Hold’em of the festival came in the form of Event #72: $1,500 Limit Hold’em Championship. A total of 337 entries created a prize pool of $480,225, with the top 47 spots paid. It took just under nine hours to determine a champion.

Among those to fall short of a cash were big names such as Yuri Dzivielevski, Sam Higgs, Benny Glaser, Juha Helppi, Natural8 Team Bling member Daniel Dvoress, Chris Moorman and Phil Hellmuth. Chris Ferguson bowed out right before the bubble, and Belarmino De Souza was the last player to leave empty-handed when tens failed to hold up versus queen-seven.

Another Natural8 Team Bling member, Anson “Tara@0z” Tsang, had secured multiple double ups but eventually bowed out in 16th place when queen-nine was cracked by the six-five suited of Shannon “Any2Cantu” Shorr in a battle of the blinds. Mark “Beanboozled” Herm, who was runner-up in a previous event, bowed out in 12th place, and the final table was set after the eliminations of Alexander “Pisky16” Piskopos and Justin “LappyPoker” Lapka. 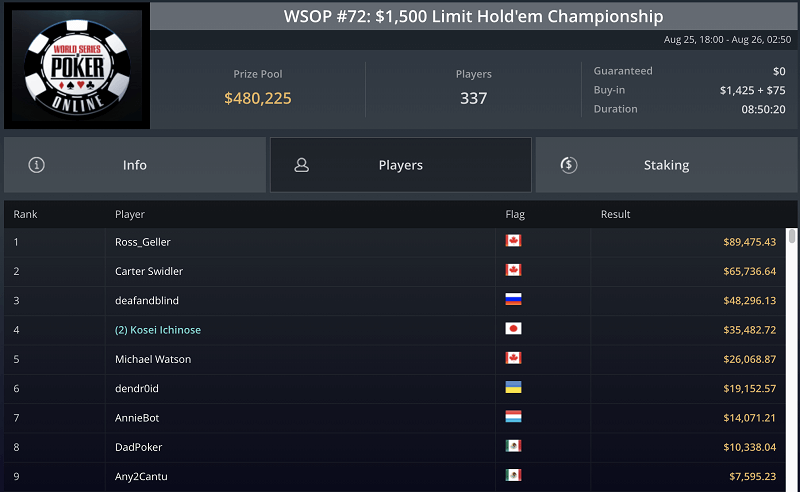 Two Natural8 players reached the final nine including Mike Watson and Team Hot member Kosei Ichinose, who was the only finalist who required a second bullet in order to get as far. Watson fell in 5th place for $26,068.87 while Ichinose was the next casualty in 4th place for $35,482.72.

By then, Ajay “Ross_Geller” Chabra was in the driver’s seat after he had started the final table in the middle of the pack. In heads-up, Carter Swidler took the lead for a short period but Chabra made quads and a full house to pull into a commanding lead. Swidler had to settle for a consolation prize of $65,736.64, while Chabra walked away with the coveted WSOP bracelet and top prize of $77,475.43, his 4th top cash of the series so far.