February will be an exciting month on Natural8, Asia’s largest online poker room. We see continuous growth for the GGPoker Network, as a record amount of $7 million will be given away to poker players all over the world. The popular GGMasters tournament schedule has also been expanded, and we see the commencement of a brand new tournament - the first-ever online edition of the Asia Poker League (APL).

This February, there will be five different daily leaderboards running. Stakes of all kinds are covered, to give poker enthusiasts a shot at winning no matter their bankroll. All current cash game tables are included (except for VIP Games), as well as the Spin & Gold jackpot Sit & Go’s.

The payouts across all stakes have also been adjusted, and more spots will be paid than before across most of the leaderboards. Rush & Cash enthusiasts will also be pleased to know that the points formula has been tweaked, with players now able to earn points with every action:

By winning a Cash Drop hand, players can accumulate up to 20 points. That can increase to 40 points during Happy Hour, which takes place daily from 6 - 8 am (UTC). During this same period, all points awarded via action clicks will be doubled.

All leaderboard prizes will be awarded in cash game dollars (C$) - the latest form of currency introduced on the network. C$ can only be used to buy into cash game tables, and will be used first for any bets and to cover rake contributions.

The daily $30,000 GGCare Flipout tournaments will also continue, giving unlucky players a shot at redemption. This restricted Freeroll takes place 45 minutes after the daily leaderboard reset and players do not have to be present to earn prizes. Every hand will be played as a Flipout and the top 25% of the field will be paid.

Within the first seven days of signing up, players can opt in for the Honeymoon for Newcomers promotion. If they do so, they will receive daily tasks which they can then complete to win prizes such as tournament tickets and cash. Those that make it all the way and complete every single task (over a month) can take home up to $301 in prizes!

One of these daily missions is based on the All-in or Fold (AoF) games, which give players the chance to earn a massive jackpot. There is also an AoF Daily Challenge, where players who play 100 hands in a day will automatically receive one buy-in.

Natural8 also provides first-time depositors a 200% match bonus (up to $1,000), or $100 in instant rewards. Instant rewards will mostly be credited in the form of Spin & Gold tickets, as well as a $15 GGMasters satellite ticket.

If you deposit at least $10, a one-time instant deposit bonus of $8 will be credited to your account. Natural8 also hosts two weekly $250 First Deposit Freerolls, as well as the weekly VIP Club Freeroll for added value.

Natural8 offers more than $120 million in tournament guarantees every single month. On top of that, players will also have the chance to win a jade trophy in the first edition of the Asia Poker League Online Series this February.

The festival runs from Feb 1 - 21 and boasts CN¥80,000,000 in guaranteed prizes. There are 16 Trophy Events, and each winner will receive one of the exclusive APL Jade trophies. Weekly country-based leaderboard freerolls with CN¥100,000 in prizes add further value, and the festival will conclude with the CN¥1,888 Main Event. This multi-flight flagship event will pay out at least CN¥10,000,000 in prize money!

In further exciting news for all MTT aficionados, the popular GGMasters schedule has been expanded as of Feb 1. Four new daily $25 GGMasters tournaments have been added, with each bolstering a guarantee of at least $25,000.

All of the tournaments above take place every Monday to Saturday, while the original $150 GGMasters (with a guaranteed prize pool of $500,000) remains in its regular Sunday slot. The $1,050 High Rollers will also take place every Sunday, and boasts a guarantee of $1 million.

This new update means there will be 27 GGMasters events each week, and all will be held in a freezeout format - giving players just one good shot at glory. 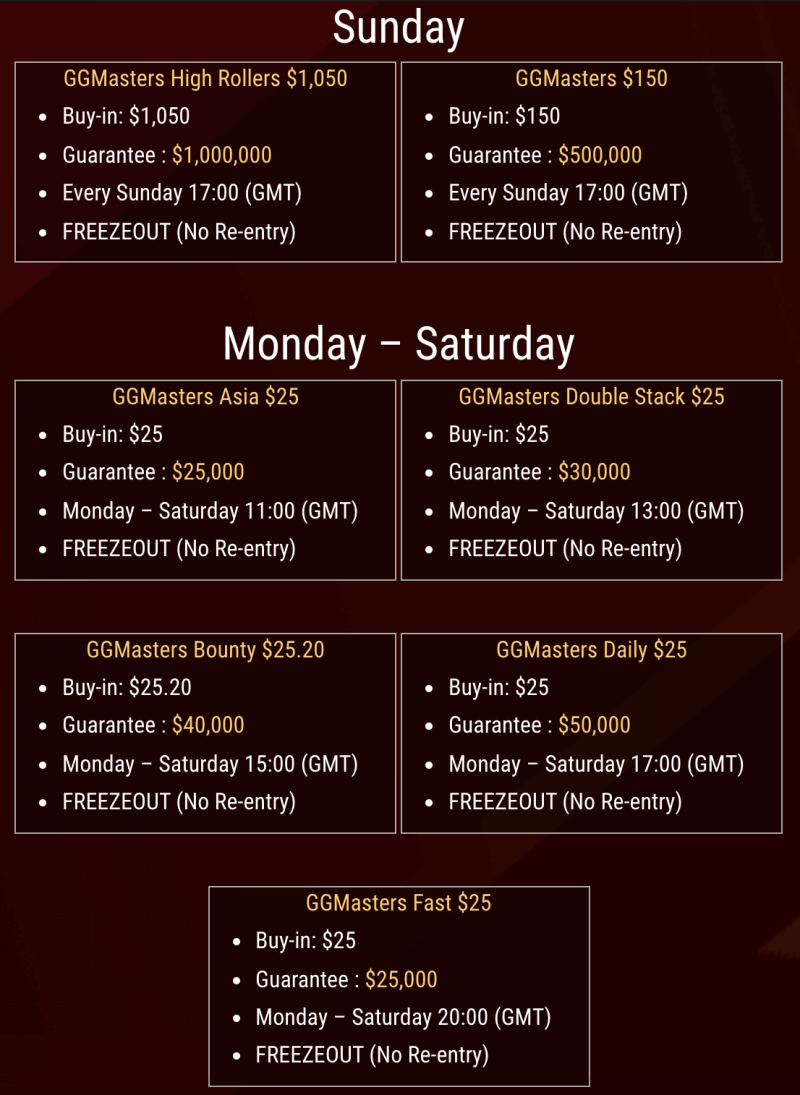