Play in Omaholic Series 2021 with $7 Million in Guarantees

The biggest Omaha festival to take place so far on the GGPoker Network (GGPN) is about to kick off. Scheduled to take place from March 14 to 28, the Omaholic Series 2021 will feature a total of 105 events and $7 million in guarantees. During this four-card festival, a new betting pattern will also be tested.

Let’s have a look at the festival details and highlights:

Four-card aficionados can look forward to non-stop action, as this two-week long Omaholic Series provides an opportunity for players to join the fray no matter what their bankroll is. The smallest buy-in is just $10.50 for the Omaholic Bounty Cooldown, while the biggest names of the online poker circuit will battle in three editions of the $10,300 Omaholic Super High Roller. Each will take place on a Super Sunday.

This bargain tournament boasts a massive guarantee of $500,000 and will certainly be one of the most popular events of the entire schedule. Satellites are available for as little as $5, and will guarantee five seats. Starting days for the Mini Main Event kick off on March 13 and will run all the way until March 21.

Each starting day features a starting stack of 10,000 - which represents 100 big blinds in the first level. All regular flights last 10 minutes each, and will play until the completion of level 18.

All survivors then combine for Day 2, which will play down to the nine-handed final table on Mar 21. The final table will be streamed the following Saturday with cards-up coverage.

A smooth one million dollars is what the $400 Omaholic Main Event will be about. As of March 21, starting days for the flagship tournament of the festival will take place. The six-handed event will feature satellites scheduled to go live once the final flights of the $55 Mini Main Event have wrapped up.

Up to four daily flights give players from different time zones the chance to enter, and all will receive 40,000 in chips. That’s good enough for 200 big blinds in the first level. 20 levels of 10 minutes each are scheduled for each regular Day 1.

All survivors will return for Day 2 on March 28 and the money bubble will be looming when the action resumes. The level duration increases to 15 minutes each, and Day 2 will conclude when the nine-handed final table is set. That one, too, will be streamed the following Saturday. 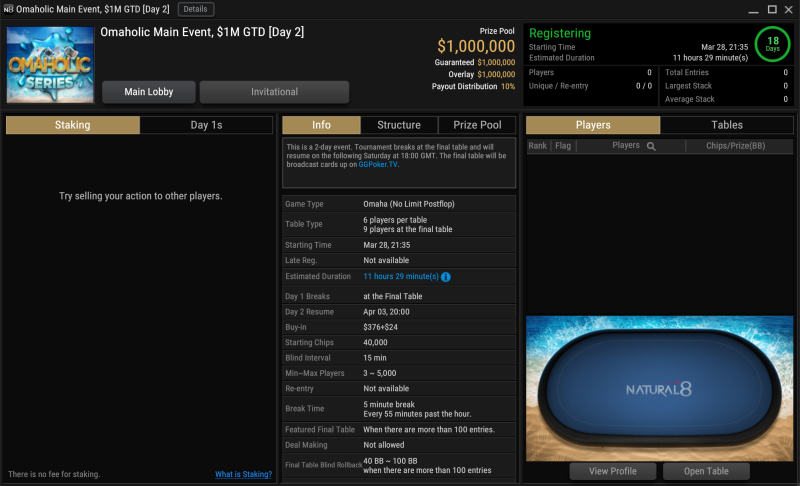 High Roller Action During the Festival

Furthermore, from Mondays to Saturdays, a daily $840 Omaholic Forty Stack will be scheduled. These tournaments come with 40,000 in chips and levels of 15 minutes each, and the top 12% of finishers will get paid.

Other Side Events at a Glance

On the other side of the buy-in spectrum are bargain tournaments such as the $15 Super Low Roller with $10,000 in guarantees on Sundays and the $15 Second Chance ($5,000 guaranteed) from Mondays to Saturdays.

As you can see, there are events for everyone and players can enter various satellites for as low as $1.50, $2, or $3 to win their seats for a fraction of the cost.

During the last GGPN maintenance on February 26, several improvements and changes were rolled out. Included in that were also betting logic changes for Omaha games.

For tournaments and cash games, antes are excluded from pot size calculations during the preflop stage but will be included for post flop considerations.

For tournaments only, the pot-limit betting remains for the preflop stage but will switch to no-limit after the flop. While this change has not yet been implemented for all regular PLO tournaments, this new game feature is being tested for Omaholic Series 2021.

So far, all Omaholic Series tournaments and satellites currently feature this new betting logic but this may be changed based on player feedback. Always check the tournament lobby to figure out the game type. 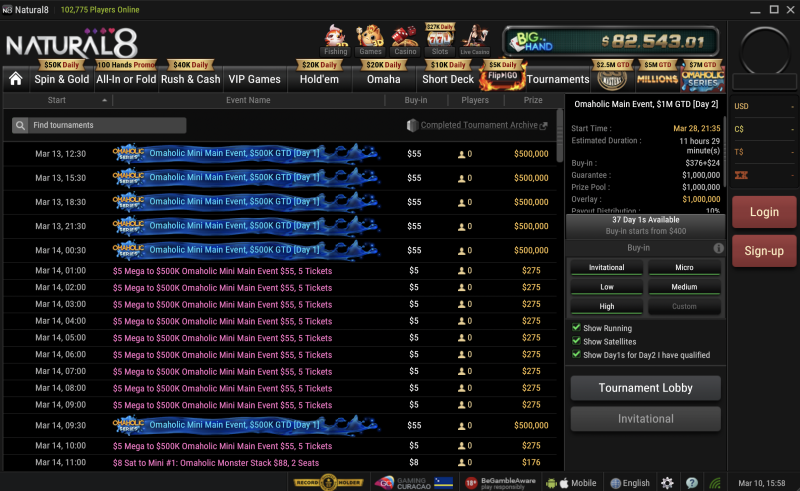 The festival is the biggest to date dedicated to the great game of Omaha on the GGPoker Network, and will hopefully spark more players to switch from two to four cards. Rush & Cash already offers PLO pools with daily leaderboards across all available stakes.

Furthermore, new Omaha All-In or Fold tables have also been implemented during the last update. Each decision in this new game type will take place on four-handed tables based on the flop stage.