If you’re new to the game of Poker you might be overwhelmed with the many different poker terms that you hear during the game. In order for a game to flow smoothly, players should be well versed with the basic Poker Action terms such as Check, Bet, Call, Raise and Fold. In this simple guide, we will explain each term and how it is used in the game of Poker.

If you find that you need to learn more about the different phases of the game of Poker such as the Flop, Turn and River, check out our Beginner’s Guide: How To Play Poker

Check is used when a player would like stay in the game and keep their cards while passing the action over to the next player. Using this option gives players the opportunity to raise, call or fold later on to any action from another player during the same betting round.

Players usually use the universal sign of tapping the table with their hands to indicate that they would like the Check.

A player opens the round of betting in a poker hand by calling a “Bet”. The player who called the action to “Bet” may be doing so because they are immediately to the left of the dealer button allowing them first action, or because another player has checked and passed the action on to them. Subsequent players will then be faced with the option to call, raise, or fold.

After a player has called a “Bet”, subsequent player can “Call” the bet. A “Call” is essentially just matching the existing wager from a “Bet” or a “Raise” in the current betting round. If no player decides to call, the hand is over and the player who made the “Bet” or “Raise” wins the hand. If in the case the hand makes it to the “River” and a “Bet” or “Raise” is called by either one or more than one player, all players who are still in the hand will show their hole cards and the best hand wins. 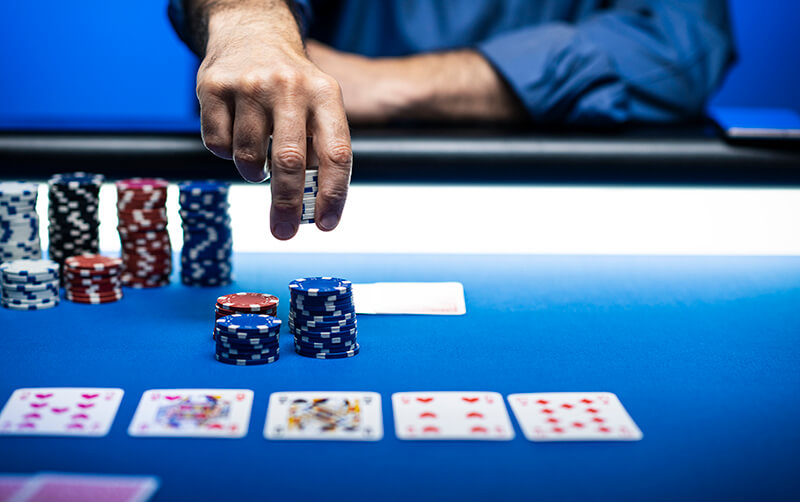 To learn more about hand rankings, please check out our Guide to Poker Hand Rankings.

A player who would like to increase the wager of the opening bet has the option to call a “Raise”. A “Raise” has to be equal or more than the amount of the previous “Bet” or “Raise”. The action of raising is usually associated with having a strong hand but can also be used as a bluff to win the pot.

After a “Raise” has been placed, subsequent players will have the option of a “Call”, “Fold” or a “Re-Raise”. A “Re-Raise” is exactly what it sounds like. Players who would like to increase the existing wager from the “Raise” that has already been placed can choose to “Re-Raise”. Now this could go on and on until a player decides to just “Call” it or “Fold”.

A “Fold” is to discard your hole cards, essentially ending your participation in a hand. Players will no longer need to contribute to the pot once they have folded. When playing online poker, players can only “Fold” when it is their turn to act. The general rule of thumb applies in live poker games as well and players who wish to fold will need to wait for their turn before declaring their intention to “Fold” by tossing their hole cards face down towards the dealer who will then place the cards in the muck pile.

Now that you’re more familiar with the basic poker actions, you can play poker with more confidence. Whether you’re playing live poker or online poker, Texas Hold’em or Omaha, you’re equipped with the knowledge that will help you improve your poker game.

Related: Beginners Guide on How To Play Texas Hold’em

Related: How To Play Omaha