A new month has kicked off with another one of the major poker tournaments on the GGPoker Network (GGPN), with the first two champions crowned in the Battle of Malta Online. It was also a busy weekend for high stakes poker players. Let’s take a look at some of the results below.

Deep Runs for Three Streamers in the $210 Beat the Pros

Yet another edition of the popular $210 Beat the Pros bounty tournament took place on October 31st. A field of 1,165 entries created a prize pool of $233,000, surpassing the guarantee by more than 10%.

With highlighted players as targets to secure entry into a $5,000 Freeroll, it became an even bigger challenge for them to make deep runs. However, three popular streamers managed to reach the final two tables. Once Belarmino De Souza bowed out in 15th place, it was Hristo “icho” Anastassov that cashed for $2,027.73 in 13th place.

GGPoker StreamSquad member Kevin Martin was the next to bust, losing kings to the ace-king suited of “Kukunder”. Fellow countryman Patrick “Egption” Tardif remained in contention, but had to settle for $3,448.04 as the final table bubble boy. “Kukunder” then busted in 9th place and the biggest slice of money went to Israel’s “caaaamel” who earned $31,666.78. 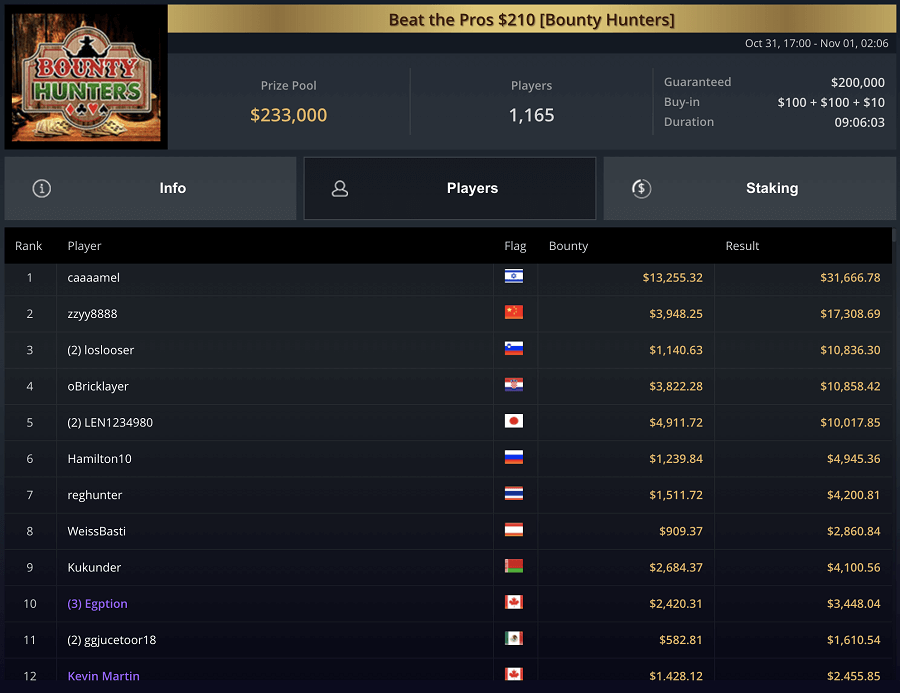 What followed were the High Rollers series on Saturday and the final starting days for the MILLION$ tournaments, which once again led to an incredibly busy Super Sunday.

While the Casino Employees Event did not kick off, both other scheduled Battle of Malta Online tournaments determined a champion and easily surpassed their slated guarantees.

Natural8 Team Hot member Pete Chen was among those to collect a min cash, while Torsten “jektiss” Brinkmann made a pay jump to $223.16. Friend of Natural8 and No Limit Gaming co-founder Stefan Schillhabel earned $483.87 for 97th place and was the last featured player in contention. 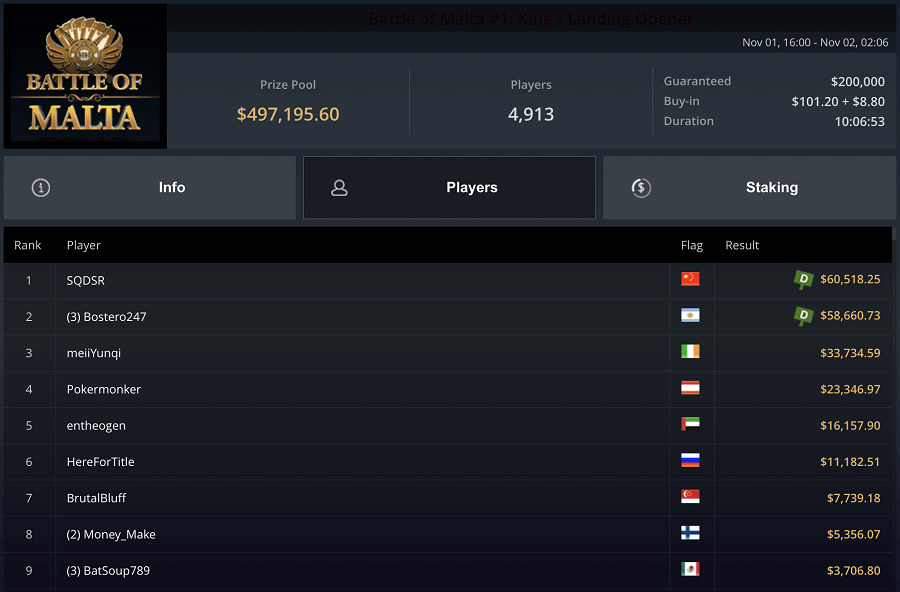 Event #3 Kings of Tallinn Main Event attracted an equally impressive field of 3,906 entries for $215 each, creating a prize pool of $772,606.80. Four players earned their buy-in back thanks to the Early Bird bubble protection feature, while 647 players collected at least $385.67. 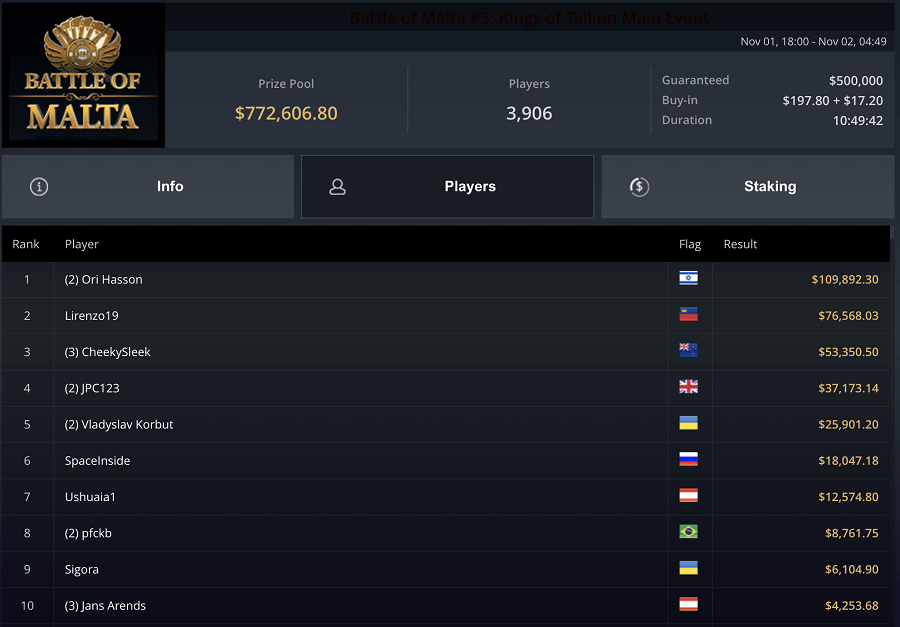 Battle of Malta Side Events

The Side Event results count towards the Player of the Series Leaderboard, which will award €50,000 in Battle of Malta live event packages.

Four card aficionados entered the fray in the $525 PLO Crusaders Bounty Quest, with 190 of them generating a prize pool of $95,000. Rui Ferreira, Dan “iStayOn5” Colpoys and Maxi Lehmanski all reached the final table, on which Arvi Vainionkulma ($17,963.72) defeated Sebastian Sirkorski ($9,469.76) in heads-up.

The $3,150 Bounty Grand Master HR drew 100 entries, with some of the biggest names in poker battling it out on the virtual felt. Daniel Dvoress, David Peters and Dario Sammartino were the first casualties on the final table. Julian Stuer and Artur Martirosian followed soon after. Andras Nemeth collected $32,384.88, and red-hot Aussie Michael Addamo cruised to a $70,336.69 payday.

Last but not least, two turbo and two hyper Side Events took place with Miguel “FreshlyBaked” Seoane amongst the winners. The UK-based Spaniard came out on top of a field of 170 entries in the $1,050 Bounty Hunters Castle Siege HR for $34,107.99.

High Rollers, GGMasters and MILLION$ at a Glance

Natural8 Team Hot ambassador Bryan Paris then streamed his deep runs in the $1,050 GGMasters High Rollers and the $525 High Roller MILLION$ on his Twitch channel. 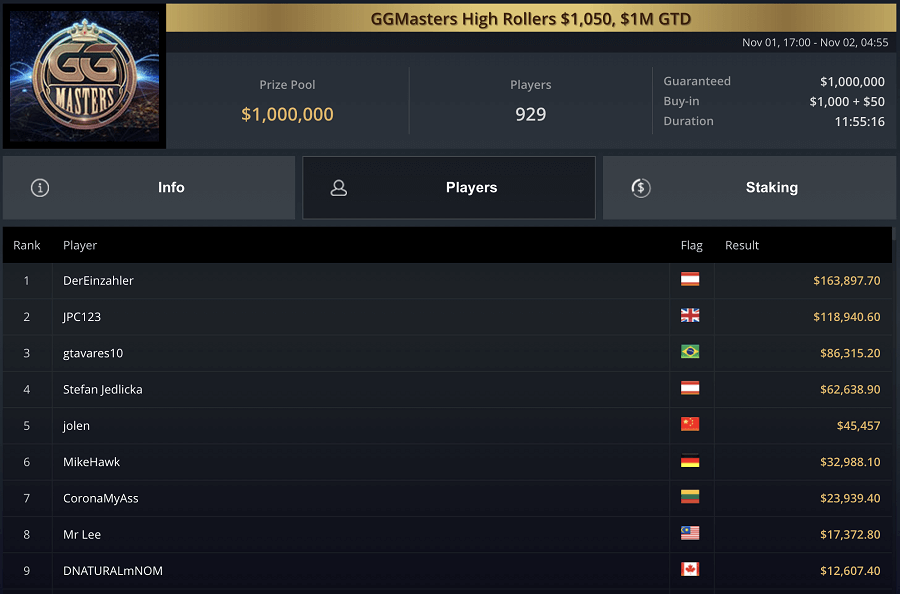 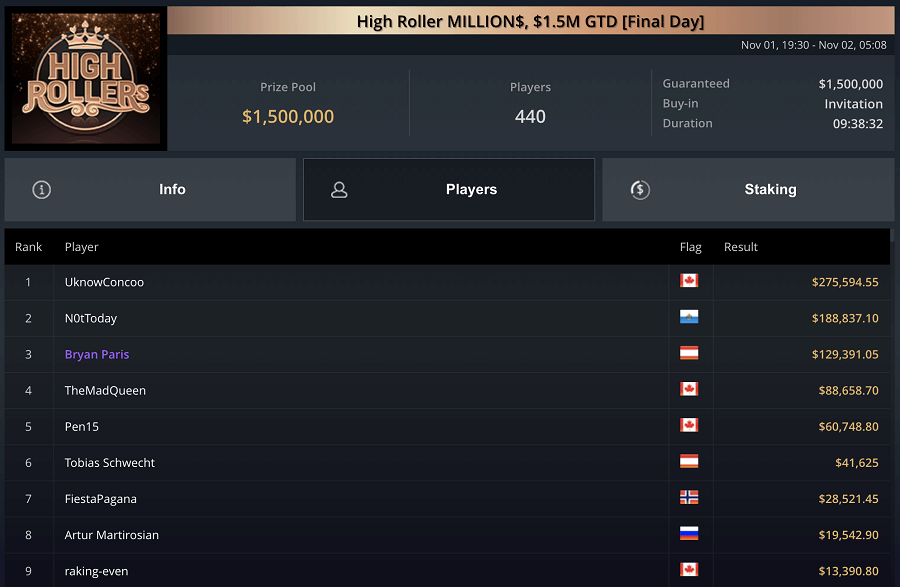 Last but not least, the $10,300 Super MILLION$ played down to the nine-handed final table. In a field of 153 entries, the top 20 spots were paid. Among those to cash but bow out before the tournament went on break were Aleksejs Ponakovs, Joao Vieira, Andras Nemeth, Mark Radoja, Matthias Eibinger, Stephen Chidwick, Ivan “zufo16” Zufic and David Peters.

The shortest stacks currently belong to Ami Barer, Timothy Nuter and Niklas Astedt, all who have at least $42,160.06 locked up. Bertrand “ElkY” Grospellier is in the middle of the pack, along with Christian Rudolph and Kenneth “rebuyguy” Smaron. The two chip leaders are Ludovic “Gr4vyB04t” Geilich and Elio Fox, and all will be battling for the top prize of $321,948.95. 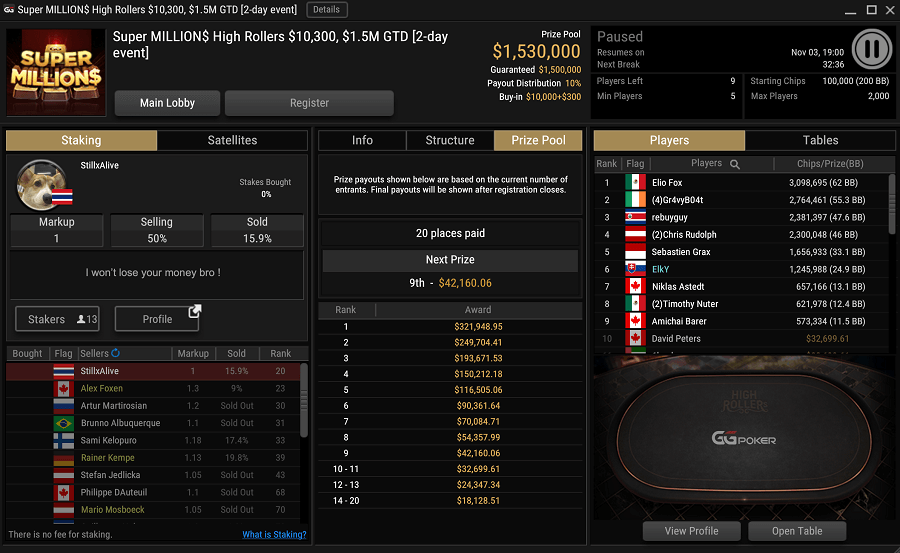