It has once again been a busy weekend on the GGPoker Network (GGPN) with the Battle of Malta Online Main Event concluding, as well as the usual High Rollers schedule awarding hundreds of thousands in cash prizes. The first of three starting days of the $10,000 WSOP Main Event also kicked off.

The lion’s share of the $4,592,252.50 prize pool was up for grabs on Saturday when the final table of the $550 Battle of Malta Main Event determined a champion. Out of a field of 8,789 total entries, only nine players remained, including Patrick “Egption” Tardif.

Croatia’s “svererii” earned $298,822.96, leaving start-of-day chip leader Mikolaj “HORN3T” Zawadzki to face Rodrigo “Eureka!!” Selouan in heads-up. Both had locked up plenty of money for Christmas presents, but it was Brazil’s Selouan that claimed the top prize of $636,477.70 without a deal. Zawadzki had to settle for the consolation prize of $436,110.97. 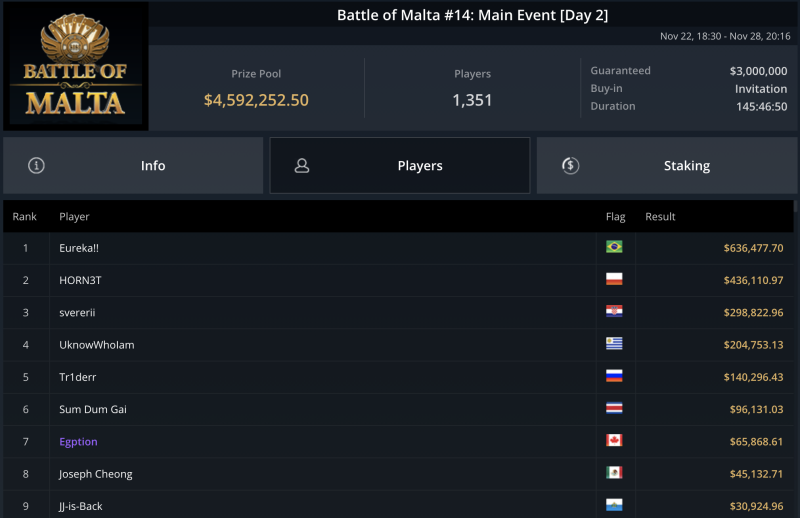 Sunday High Rollers in a Nutshell

Brazil almost got there again with another victory in a flagship event on the GGPN, as two contenders reached the podium in the popular $210 Beat the Pros. This time, 1,339 entries attracted a prize pool of $267,800. Most of that was up for grabs on the final table, thanks to the progressive knockout format. 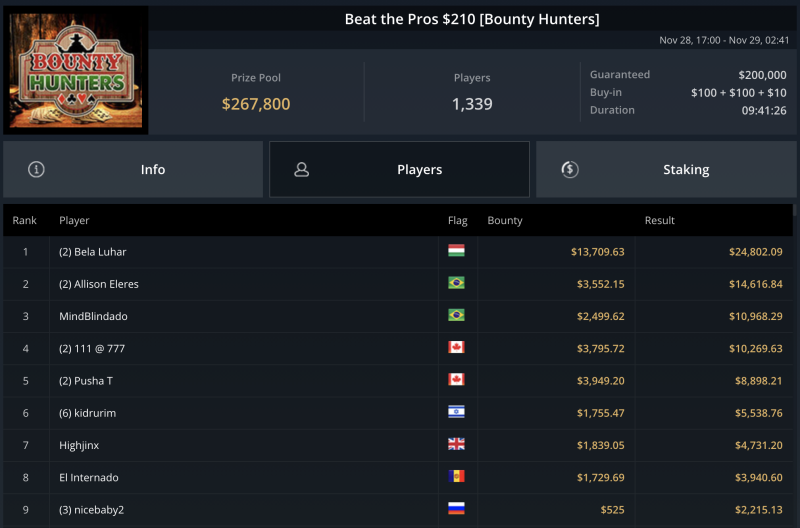 It took nearly eight-and-a-half hours to whittle down 108 players to a winner in the $840 High Rollers Marathon. Andrey Pateychuk, Russian casino streamer “danludan” and Brock Wilson were some names to reach the final table. In the end, Vladislav “imjuniar” Mezheritsky ($16,788.37) cut a deal with Duy Thanh “endlesslove” Dang ($18,889.59).

The $400 Forty Stack attracted a field of 166 entries, with notable finalists including Shyngis “somebodyelse” Satubayev, Rainer Kempe and Manuel “robocup” Ruivo. Fausto “Fantastik55” Tantillo was the only one to collect a five-figure payday and padded his bankroll with $12,566.79.

Morocco resident Idris Ambraisse reached yet another final table on the GGPN, and finished 3rd in the $525 Bounty Hunters High Roller for $5,118.55. Only Kunlong “jack chan” Yu ($6,779.79) and Vyacheslav “SpaceInside” Zaslavsky ($10,683.77) earned bigger paydays than the Frenchman.

Out of 89 entries in the $1,050 High Rollers Main Event, it was Pedro “WhyNotChili” Ivars that earned the top prize of $21,092.16 after defeating the likes of “danludan”, Juha Helppi, and Jargo “bungakat” Alavali on the final table. Vlad “CheckEtoFold” Martynenko fired five entries and finished as the runner-up for $15,973.62.

Another three High Rollers events played to a winner during the late part of Saturday, and it was an Argentinian heads-up for victory in the $1,260 Bounty Six Shooter. Martin Pineiro collected $11,097.62 while Leandro Bianchini cashed for $19,939.63, of which more than 62% came from progressive bounty prizes. 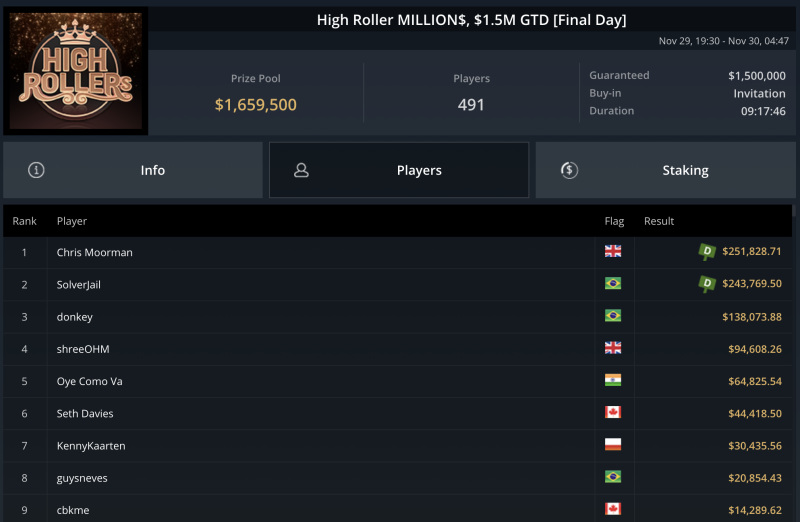 Both GGMasters editions also managed to surpass their guarantees, including the popular $150 Classic as well as the $1,050 High Rollers.

Canadian poker prodigy Kristen Bicknell overcame the likes of Artur Martirosian, Ramiro “OnTheFlow” Petrone and Ole Schemion in heads-up to win the $840 Sunday High Rollers Bounty Special for $27,445.58. In the $210 Bounty Hunters Main Event, it was once again a Canadian flag that waved from the top spot as Curtis “Knighter” Knight claimed $42,001.14 after overcoming a field of 2,016 entries.

The Sunday High Rollers continued with 394 entries in the $840 Marathon. It was Leandro Bianchini that earned a second victory on the weekend for $57,123.80.

Last but not least, the $5,250 Blade Closer clocked in at a duration of five hours and attracted a field of 58 entries. Daniel Hindin bubbled and the next paydays went to Anatoly Filatov, Stephen Chidwick, Alexandros Kolonias and Daniel Dvoress. Russian streamer “danludan” collected $44,324.26 and Seth Davies ($61,399.64) finished runner-up to Dario Sammartino ($100,466.70).

The weekly flagship High Roller Event also took place on Sunday. The $10,300 Super MILLION$ attracted a field of 182 entries this time, and the $1.82 million in prize money was split among the top 20 finishers.

Austria’s Thomas Muehloecker was the bubble boy and min cashes worth $23,532.05 were awarded to Laurynas Levinskas, Justin Bonomo, Aleksei “JokerFace” Barkov, Arsenii Malinov, Matthias Eibinger, Ami Barer and Brunno Botteon. Another four players cashed before the nine-handed final table was set, including Andras Nemeth and Daniel Hindin ($34,345.94 each) as well as Guillaume Nolet and Matthew “Nator” Hyman ($50,129.17 each).

All remaining hopefuls have at least $61,837.77 locked up and each pay jump becomes more significant. Julian Stuer, Rui Ferreira and Pascal Hartmann are the three shortest stacks, while Artur Martirosian and Niklas Astedt – who has reached the final table in this event for the sixth time – are in the middle of the pack.

Christian “CharlieD23” Jeppsson sits in 3rd place with 32.4 big blinds at his disposal, while Joakim Andersson is second in chips with 47.8 big blinds. Nearly two times as many chips belong to Koray Aldemir, who is in prime position to claim the top prize of $331,553.67. 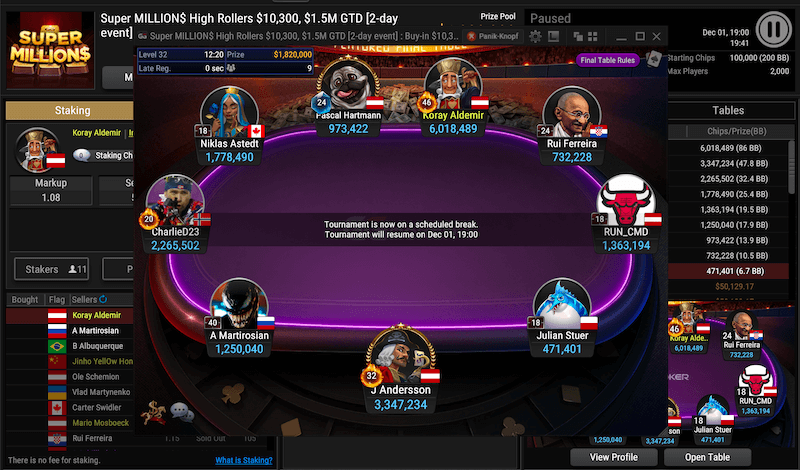 And for the first time, poker enthusiasts from all over the world have an additional sweat for this final table as GGPN has partnered up with PokerShares to provide final table betting on the winner. That option becomes available once the final table is set and until the restart of the live-streamed showdown.