Second Half Begins at the WSOP Super Circuit Online Series

The second full week of the 2021 World Series of Poker Super Circuit Online Series has wrapped up and another four elusive WSOPC Rings have been awarded. There was at least one Natural8 player on each final table for these tournaments and the second LiveX sponsorship has been awarded.

Lets have a closer look at how the best Natural8 players performed.

The only mid-week tournament to determine a champion this time was Event #8: $800 Deepstack No Limit Hold’em Championship, which came with a guaranteed prize pool of $1 million. Thanks to 1,545 total entries, that was surpassed and the top 224 finishers earned at least $1,140.17 out of the $1,174,200 prize pool.

GGSquad streamer Kevin Martin had yet another deep run but fell in 21st for $6,461.20. Brazilian players Tauan Naves, Lucio “WizardOfAz” Lima and Eder “BlueMoon” Campana bowed out on the final two tables with the latter bubbling the final table in 10th place. Katie “ShantayUStay” Lindsay was the first casualty thereafter followed by Vlad-Stefan “HaiFanFan” Lache in 8th place.

The sole Natural8 finalist was Patrick “Nelepo10” Ulyssea, who had to settle for 6th place and a payday of $38,745.41. Andres “chokitin” Korn cracked aces with king-jack to remain in contention with five players remaining and eventually went all the way. He prevailed against Rafi “CheckYoMama” Elharar (3rd for $91,879.72) and topped a short-lived heads-up against Yannick “ProbierEs” Schumacher (2nd for $122,523.59). 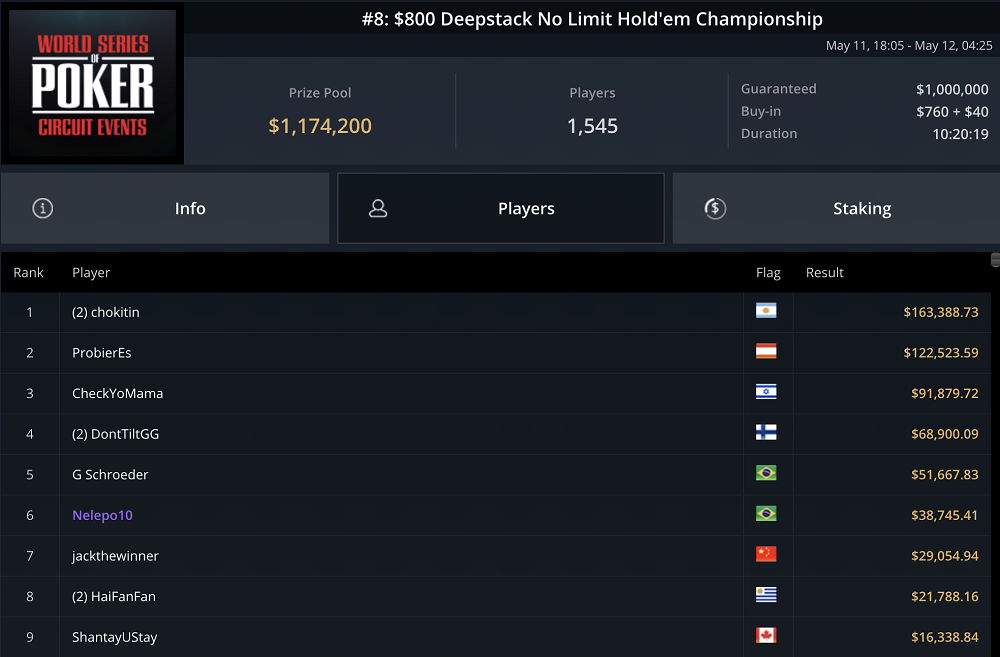 On Saturday, May 15, poker players from all over the world were taking their shot at glory in Event #9: $525 Bounty Deepstack No Limit Hold’em. The tournament came with a guarantee worth $500,000 and thanks to 1,605 entries, the prize pool was boosted to $802,500. With $250 heading to the bounty pool and $250 to the cash pool, the top 224 finishers earned at least $724.18 in cash whereas those busting prior to that had to settle for accumulated progressive knockout rewards.

Chih Wei “FanChihWei” Fan ended up as the bubble boy for the cash portion and had to settle for $375 in bounties. Some of those that busted soon after were GGSquad member Torsten “jektiss” Brinkmann, Arnaud Enselme, Natural8 Team Hot ambassador Pete Chen, JinHo “Yell0w” Hong, and Natural8 streamer Dan Almeida.

Dzmitry Urbanovich made the top 50 and Daniel Dvoress fell in 38th place for $1.793.47 in combined prizes. Oswin “Os_winz3” Ziegelbecker and Ami Barer bowed out just shy of the final table while three Natural8 players made the cut this time around.

That left Jonas “LobyPewis” Mackoff and Aleksey “somebody444” Churbanov to battle for the title and WSOPC Ring. For Mackoff, it was the third top 10 finish of the series and he narrowly missed out on a second victory after walking away as the runner-up for $47,901.49. Churbanov earned his maiden WSOPC ring, which came with $69,142.65 in cash and bounty prizes. 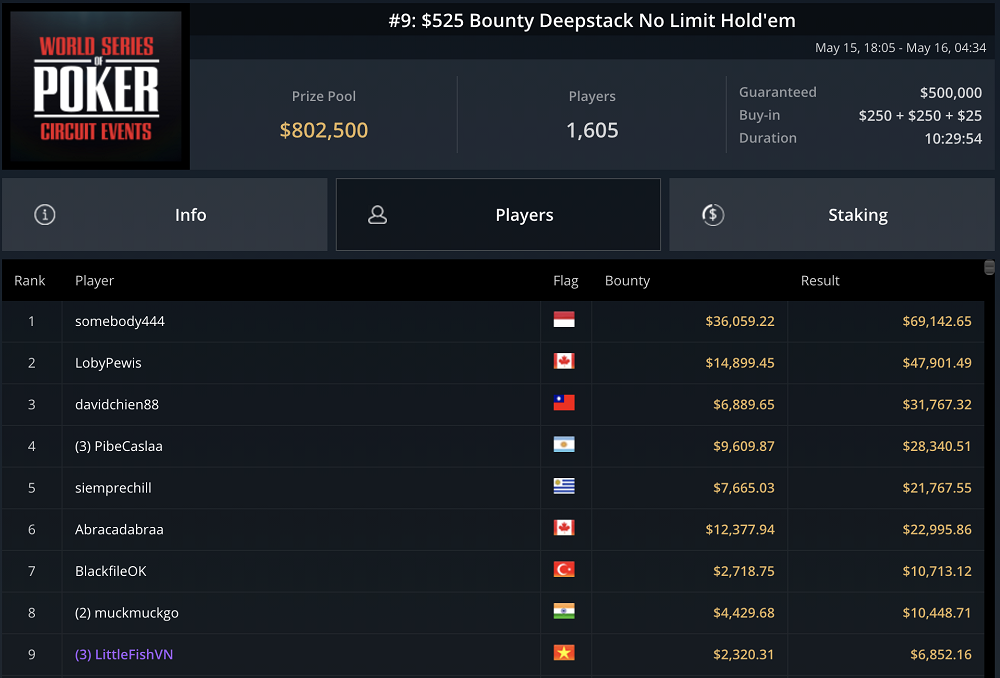 The most successful event in terms of Natural8 finalists so far took place this past Sunday, May 16 as four players reached the final table of Event #10: $100 HUNDRED STACK. It was a massive field of 8,404 in one of the bargain WSOPC Ring tournaments of the festival and that created a prize pool worth $773,168.

It would take more than 11 hours to determine a champion and when the nine-handed final table was reached, the contenders were not deep-stacked anymore. Thanks to the feature event rule, however, the blinds were rolled back six levels to ensure an average of at least 40 big blinds.

Well known Asian grinder Sparrow “FacelessMan” Cheung fired three bullets and eventually succumbed in 9th place for $8,482.55. The next casualty was the second Natural8 finalist as Brazil’s “AFS-20” took home $11,311.66. Curtis “ProdigyC” Lim made it to third place and padded his bankroll with a payday worth $47,700.88.

PokerCode player Markus Prinz faced off with David “Alw4ysinduc3” Vinayagamoorthy in a European heads-up duel for the WSOPC ring and Prinz ended up as the runner-up. Having fired two entries, the Austrian turned that into $63,610.13. For Vinayagamoorthy, entry number five was the charm as he prevailed and became the latest WSOPC Ring winner. He also earned $84,831.28 along the way after a long night of poker, and will receive the $10,000 LiveX sponsorship courtesy of Natural8. 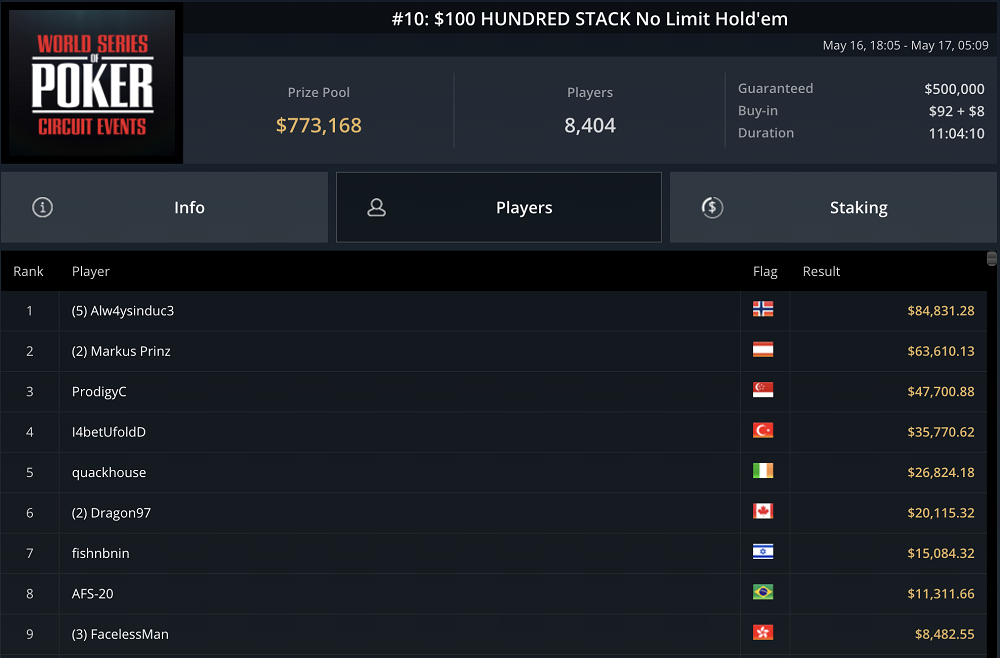 The largest event of the series to date attracted a field of 10,166 entries in Event #11: $400 COLOSSUS. The tournament sailed past the $2.5 million guarantee and paid out $3,822,416 to the top 1,100 finishers. Only 1,438 hopefuls made the cut in their starting flights and the bubble burst prior to the first scheduled break on the final day with the elimination of Gavin Cochrane.

Joao Simao, Jargo Alavali, Laszlo Molnar, Olivier Rebello, Dzmitry Urbanovich, Mikita Badziakouski, and Mike Leah were some of the big names that ran deep but failed to reach the final few tables. The GGSquad members Kevin Martin and Patrick “Egption” Tardif were also in the mix and busted just outside of the top 100 while Mario Mosboeck missed out on another victory and hit the rail in 81st place for $4,875.07.

Natural8 streamer Hristo “icho” Anastassov made it to 55th place for $6,348.85 and Joao Vieira earned the same payday for finshing in 47th place. Irish player “Vince Cavailles” bubbled the final table and earned $18,261.94 while all nine finalists then had at least $42,175.21 locked up. Two Natural8 players were still left in contention and enjoyed a successful Sunday session. Hong Kong based Dicky “Floatinworld” Tsang finished in 8th place for 56,241.73 and India’s “GotchEm” received $100,013.20 for their sixth place finish.

With each pay jump turning more significant, the final three players agreed to an ICM deal. “Clarky91” was the first to bust for $302,561.02 while fellow Canadian player “TooStonedMonkey” finished as the runner-up for $342,128.77. Mexico-based player “PDC Mayor” only received $330,506.72 but collected all the chips to also earn the WSOPC ring. 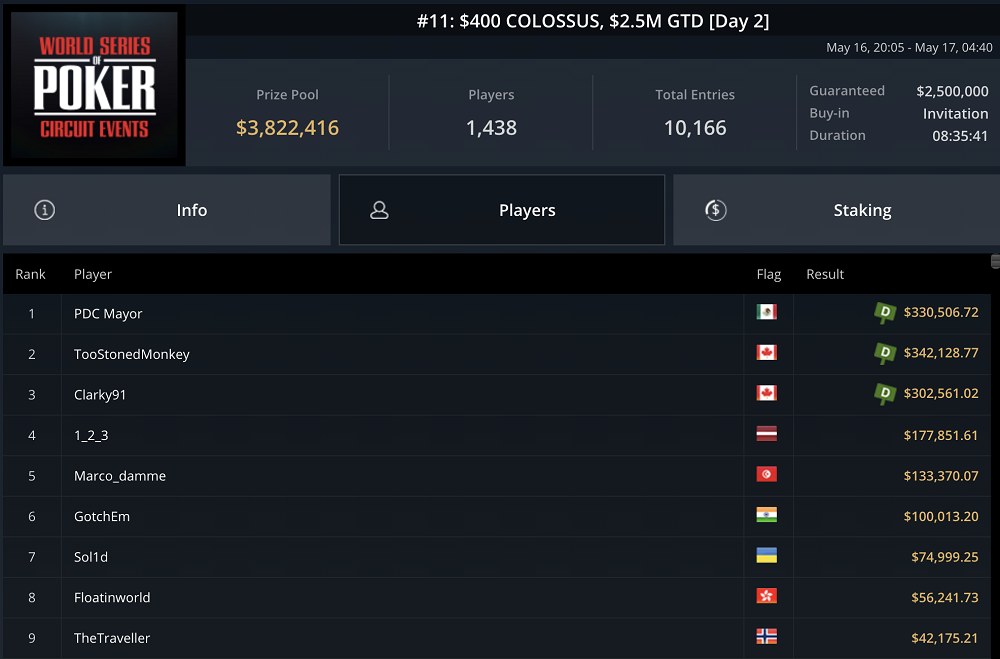 Which Events are coming up next?

Four card aficionados can showcase their skills in Event #12: $800 Pot Limit Omaha Championship on Tuesday, May 18. Two bargain tournaments follow on May 22 and May 23 respectively with Event #13: $210 Bounty 6-Max No Limit Hold’em and Event #14: $77 LUCKY 7’s No Limit Hold’em. Last but not least, the first starting days for Event #15: $400 PLOSSUS are already underway. At least $1 million in prizes will be awarded and the tournament plays to a winner on May 23 as well.