Short Deck Hold’em hasn’t been around for very long but it’s slowly and surely gaining popularity amongst the online poker community.

The rules of the game are simple and very similar to Texas Hold’em. The difference is that in Short Deck Hold’em (or sometimes known as 6+ Hold’em), the game is played with a 36-card deck. All cards from 2 through to 5 are removed from the deck.

Short Deck Hold’em follows pretty much the same game play and rules as No Limit Hold’em.

What is the difference between Short Deck and No Limit Hold’em?

Button Blind: Short Deck Hold’em uses a “button blind” structure. Every player is required to post an ante and the player on the button will post a blind. The traditional structure of Small Blind/Big Blind does not apply here and there is only one blind per hand. The blinds per hand is typically about 2 to 4 times the size of the ante. Remaining players who want to call pre-flop will need to up the ante to match the size of the blind.

36-Card Deck: Short Deck Hold’em or 6+ Hold’em is named such because there are less cards in the deck. All cards from 2 to 5 are removed which means there is a significant change in the hand rankings. Because of the reduced number of cards, the probabilities have changed. It is much harder to hit a flush now that there are only 9 suited cards as opposed to 13 in a full deck. Flushes are rarer and will now beat a full house. 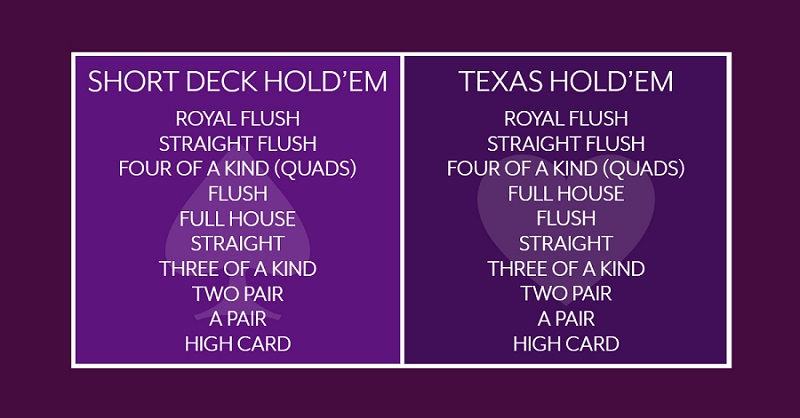 The short deck in 6+ Hold’em has changed the game of Hold’em and may be challenging as it may test your knowledge on Hold’em Poker odds.

Players will have have more playable starting hands as the two hole cards have a higher chance of being paired or connected. Pocket Aces, or any pocket pairs, will come along twice as often. Gone are the days of disconnected hands like 2♠ 8♥ or 5♣ Q♦. With more playable hands, there will definitely be more action and players will be involved in more multiway pots.

In Short Deck Hold’em, players will also find themselves drawing a straight more often. The probability of flopping an open-ended straight draw goes up to 19% in Short Deck as compared to 10% in a full-deck game.

And with less cards in the deck, players will find themselves hitting their outs more often. The chances of hitting an open-ended straight draw by the river increases to 45.5% as compared to just 31.5% with a full deck.

Pocket pairs have about a 17% chance of hitting a set on the flop as compared to 12% in a regular Hold’em game with a full deck.

Players will find it harder to flop a flush draw and the chances of hitting one becomes even less. Players who flop a flush draw will only have 5 outs and a 30% chance of hitting the flush by the time it gets to the river, compared to the 9 outs and a 35% chance in a regular full deck game. If a player misses the flush on the turn, the odds drops to 16.6% of hitting the flush on the river. In a regular full deck game of Hold’em, the odds at the river would be 19.5%.

TIP #2: Estimate your odds by using the 6 and 3 rule.
Do some quick mental math to estimate your chances of hitting a draw. To do this, multiply the number of outs by 6 on the flop, and 3 on the turn. For example, if you have a 8-out straight draw on the flop, multiply 8 with 6 and you’ll have roughly a 48% chance of hitting the straight by the river. And if you have a 6-out straight draw on the turn, multiply 6 with 3 and you’ll get a 18% of hitting the straight on the river. If you’re new to the game and are still trying to get used to the short deck odds then this rule can be a stack saver.

TIP #3: Tap into your knowledge from regular Texas Hold’em.
Short Deck Hold’em might have less cards to draw from and the odds may be drastically different, but it doesn’t mean you should disregard the basic strategies of Texas Hold’em. Betting strategies still apply even though the ranges are different. Your knowledge and understanding of basic Hold’em strategy is still your strongest asset.

Short Deck Hold’em is relatively new compared to traditional Hold’em. Compared to No-Limit Hold’em, Short Deck Hold’em and Pot-Limit Omaha has slowly become favourites for high rollers and those who love action. So give it a go and don’t forget to put the tips to good use.

What Are Tournament Overlays and Why it Matters?