The addition of High Rollers Week (HRW) has bumped the guarantees of several regular high stakes tournaments on the GGPoker Network (GGPN), attracting high-profile online poker players vying for millions in prize money. Read on for poker news results on regular GGPN events, as well as a summary of the first HRW tournaments.

Beat the Pros and Regular High Rollers Series on Saturday

Three featured players reached the final three tables in the $210 Beat the Pros this past Saturday, including Michael “Minthon” Iakovlev (26th place), Di “LuXDi” Lu (22nd place), and Leonid “LeBroHbKA” Logunov (16th place). Each was awarded a $5,000 freeroll entry, on top of a bounty prize to the player that knocked them out.

The $840 High Rollers Marathon kicked off the High Rollers events on Super Sunday, with 334 entries ensuring a prize pool of $267,200. Plenty of notables such as Juan Pardo Dominguez, David Peters and Pascal Hartmann made it to the final table. Kevin Rabichow finished 2nd for $36,576.25, and Georgios Sotiropoulos turned his second entry into the $49,784.67 top prize.

Norwegian PLO specialist Andreas Torbergsen steamrolled to victory in the $2,100 PLO Bounty. The $34,000 in bounties (more than three times of anybody else) spoke for itself, with Torbergsen eventually taking home a total of $48,155.15.

Andreas Christoforou needed four entries to take down the $1,050 High Rollers Main Event for $36,725.14, while Hartmann finished 2nd ($27,908) on a single bullet. The duo outlasted the likes of Ottomar “Decent!” Ladva, Anatoly Filatov, Andrey Pateychuk and Kristen Bicknell on the final table.

Last but not least, the weekly $150 GGMasters mid-stakes showdown saw 4,172 entries for the popular freezeout event. After more than 12 hours of play, the only known poker pro on the nine-handed final table had all the chips: Germany’s Daniel Smiljkovic, who currently resides in Austria, went all the way and took home the top prize of $82,223.98.

High Rollers Week kicked off with an overlay in the HRW #01 $1,050 GGMasters High Rollers, which came up short of covering its $1.5 million guarantee with 1,325 entries. Only the top 215 finishers earned at least $2,319.30, and it would take more than 12-and-a-half hours to determine a champion.

Arguably the biggest name in contention was Kazakh Shyngis “somebodyelse” Satubayev, who made it all the way to heads-up. However, Satubayev could not close out victory and had to settle for $169,678.50. Paraskevas “Cantaloupe7” Tsokaridis became the first champion of the new festival and took home $233,813.55. 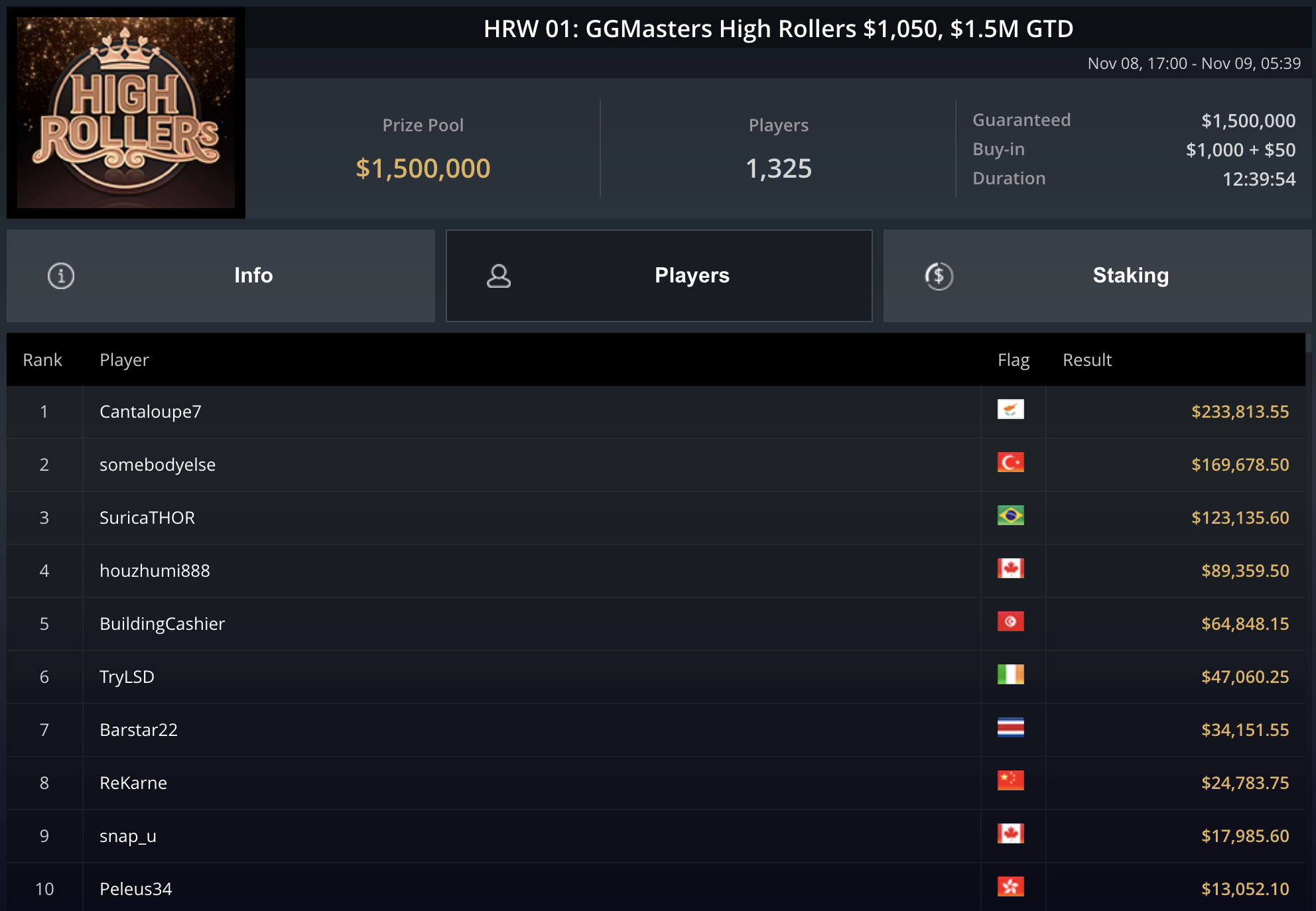 Four-card aficionados rejoiced at the chance for high-stakes Pot-Limit Omaha action in HRW #03 $10,300 PLO High Roller. The guarantee of $1,000,000 was easily surpassed thanks to 124 total entries. The one-day tournament ran for more than nine hours, and the top 17 finishers earned at least $23,517.22 for their efforts.

Felipe Ramos, Yuri Dzivielevski and Rui Ferreira were the last three to walk away empty-handed, while Christian Rudolph was among those to min-cash.

Two Finns were at the top of the leaderboard when the remaining hopefuls combined to one table, as Lauri “KarilleMeni” Varonen held the lead ahead of Aku Joentausta. Varonen would eventually succumb in 7th place for $52,658.46, followed to the rail by Leonid Yanovski, Ronny Kaiser and Shyngis “somebodyelse” Satubayev.

After bluff-catching Isaac Haxton, Joentausta entered heads-up against Andriy “smbcall911” Lyubovetskiy with the lead. This was temporarily relinquished, but the Finn eventually held up with kings up and a flush draw against queens up and a gutshot. Lyubovetskiy earned $206,747.30 and Joentausta walked away with the top prize of $271,790.42. 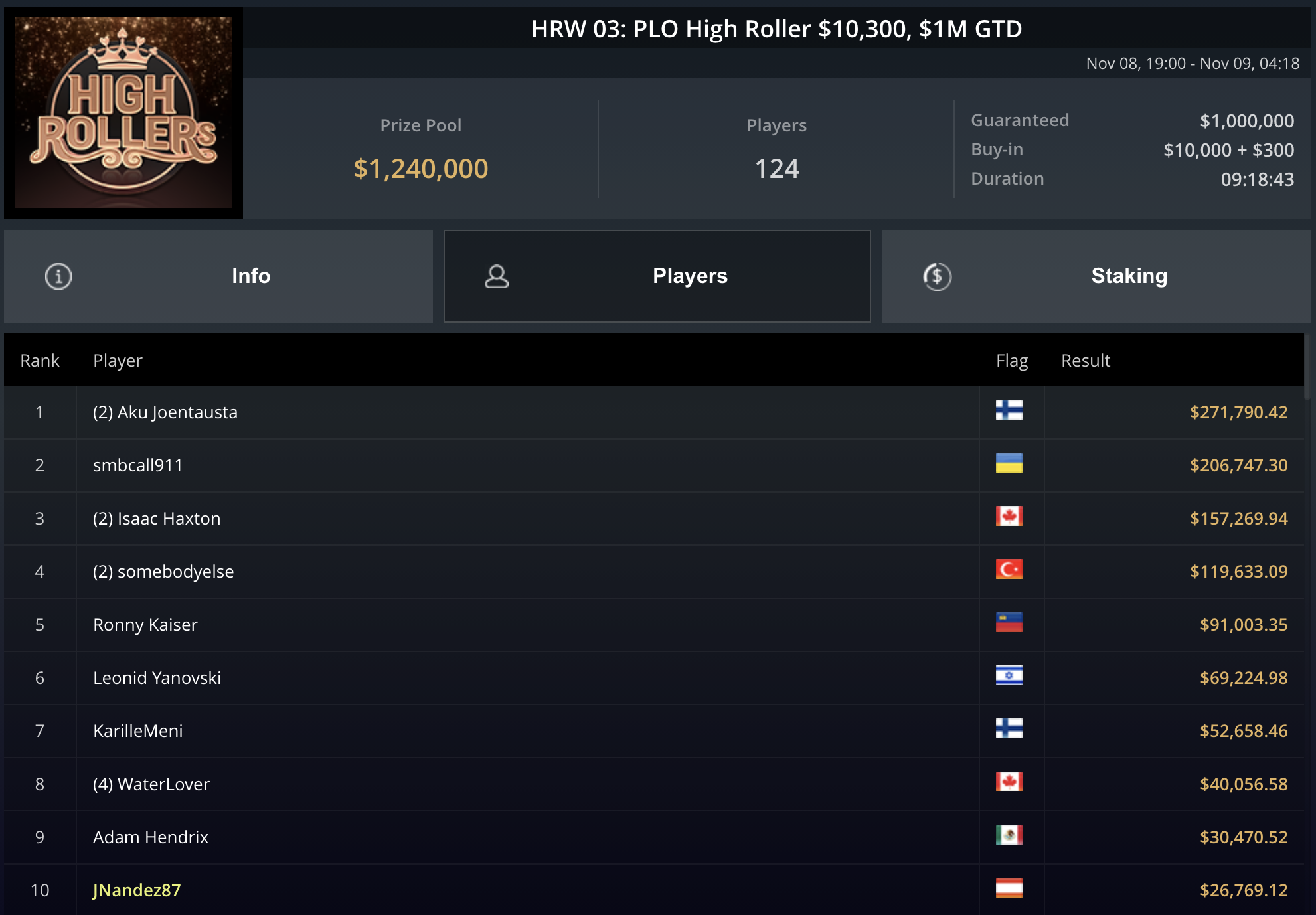 Last but not least, the HRW #04 $5,200 NLHE High Roller came with a guaranteed prize pool of $600,000. Thanks to 143 entries, the event paid out $715,000 in prizes to the top 20 finishers. Unfortunate bubble boy was Nick Petrangelo, while Julian Stuer, Ami Barer, Joni Jouhkimainen, Mikita Badziakouski and Andras Nemeth fell in the first two payout steps.

Included in the next batch of casualties were the likes of Timothy Nuter, Dario Sammartino, Laurynas Levinskas and Kyle Menard, the latter who fell in 10th place to set up the final table. Michael Addamo fired five entries in total and earned $22,133.03 for finishing in 8th place; Thomas Muehloecker then became the next casualty. 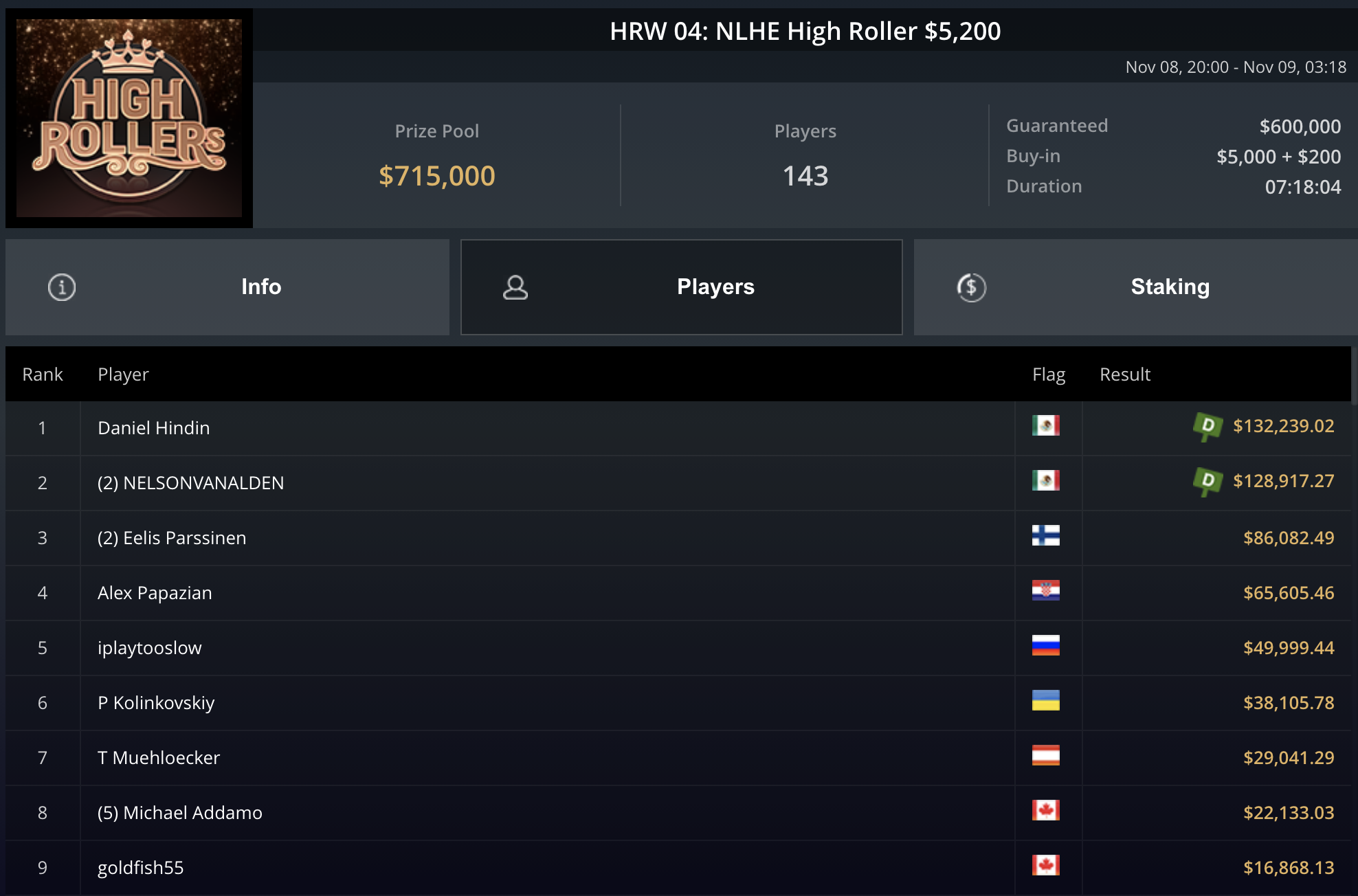 The first of two special editions of the $10,300 Super MILLION$ came with a guaranteed prize pool of $3 million, which was all but reached with a total of 291 entries. As usual, the first of two tournament days held two goals – reaching the money and making it to the nine-handed final table.

Only the top 30 finishers earned at least $23,131.20. “xingg” and Christian “CharlieD23” Jeppsson missed out as the bubble boys, coming up short against the ace-king of Philippe D’Auteuil.

Kenneth “rebuyguy” Smaron, Jans Arends and Juan Pardo Dominguez also missed out on the final table, which was then set by the hot run of Kyle Menard, who knocked out Ottomar “Decent!” Ladva and Ravid “jerbi9999” Garbi. 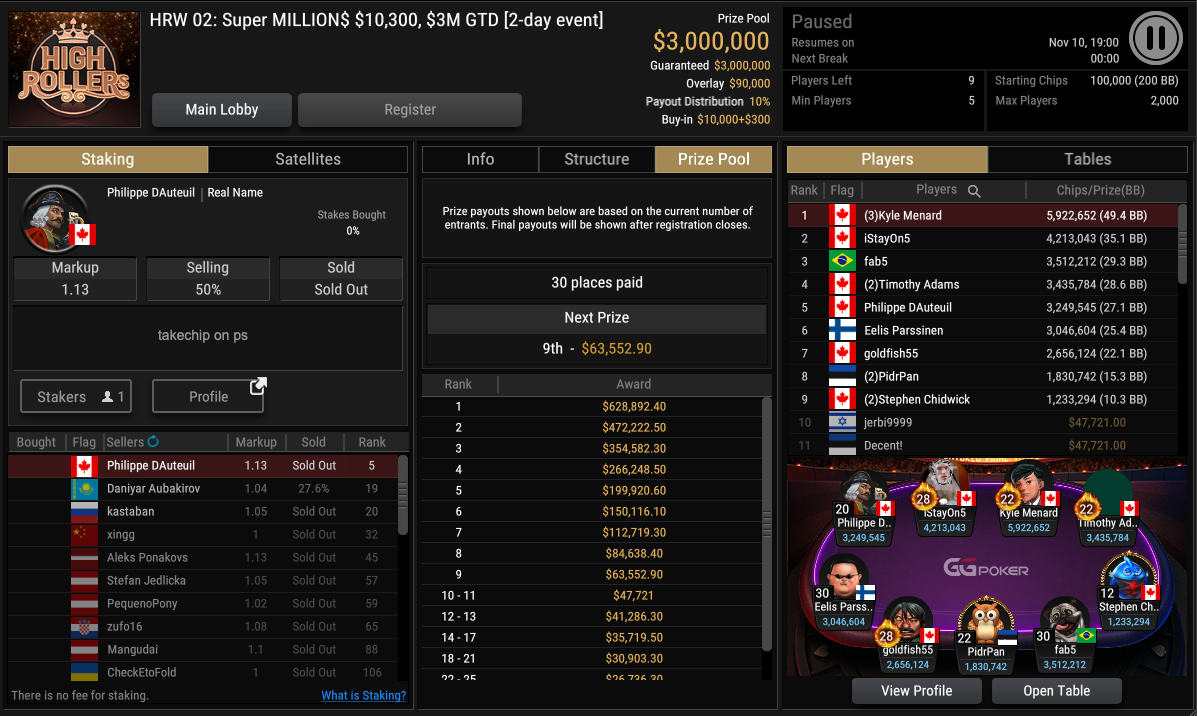 Menard is the current chip leader with 49 blinds, followed by Dan “iStayOn5” Colpoys. Other notables on the final table include Timothy Adams, Philippe D’Auteuil, and Eelis Pärssinen.

Shortest stack heading into the live-streamed final table on Tuesday is Stephen Chidwick with 10 big blinds, but the Brit already has at least $63,552.90 locked up. Each pay jump after that will be significant, going all the way up to $472,222.50 for the runner-up and $628,892.40 for the eventual champion.