This second part of the Super MILLION$ Week (SMW) summary includes Events 11 through to 20, and focuses on the mid-week tournaments leading up to the final weekend of the high-stakes festival. Well-known names of the poker scene were among those crowned, including Rui Ferreira, Georgios Zisimopoulos and Jason Koon.

Let’s take a look at the results below and find out who earned big paydays!

On March 3, three Super MILLION$ Week tournaments kicked off. Two played down to a winner on the same day, while the Wednesday Main Event concluded a day later. All three champions ended up being familiar faces of the international poker scene.

In Event #12: $525 Bounty Hunters HR Special, a field of 687 entries easily surpassed its $200,000 guarantee. The top 98 finishers earned a slice of the cash prize pool, with players also claiming at least $125 for each knockout. In the final stages of this PKO tournament, these bounty prizes became pivotal for the action.

Leonardo Mattos and Fabian “MeowTzGenau” Gumz were the most active players based on their accumulated PKO prizes, and it came as no surprise that they ended up in heads-up. Mattos eventually had to settle for $26,584.85 in prizes while Gumz earned $43,193.87 for his victory.

In Event #14: $5,250 PLO, the $250,000 guarantee was nearly doubled thanks to 96 entries. Only the top 13 finishers received a portion of the $480,000 prize pool and Ami Barer’s third bullet ended right on the money bubble. Adam Hendrix fired as many entries and got some money back while ending up on the final table bubble.

The usual PLO experts were in the mix for big prizes. Gavin Cochrane (7th place for $23,404.60) and George Wolff (6th place for $30,359.28) fired multiple entries each to reach the final table. Both Jelle de Kroon (4th place) and Andras Nemeth (3rd place) got through with one bullet each.

Ioannis Angelou-Konstas also needed just one entry, turning that into a $85,951.15 payday. However, it was recent WSOP Circuit ring winner Samuli Sipila from Finland who claimed the top prize of $111,491.57. 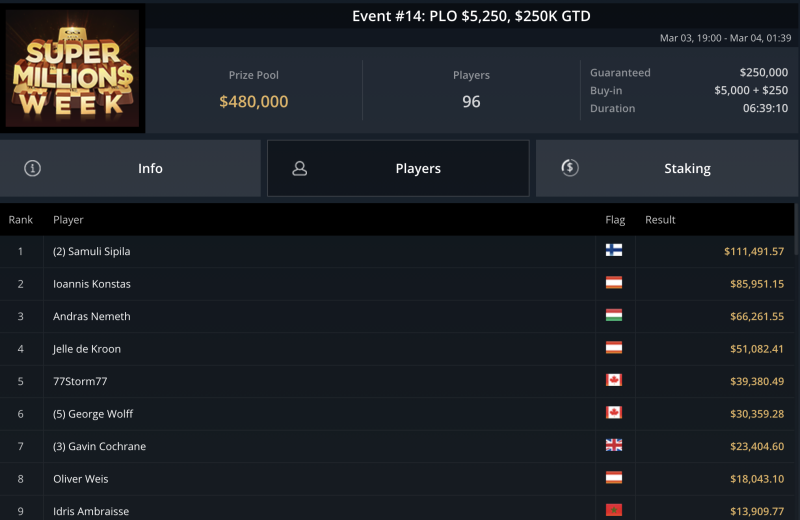 Event #13: $1,050 Wednesday Main Event came with a field size of 457 entries. 50 players cashed, and Sami Kelopuro ended up as the bubble boy. Steve O’Dwyer, Nick Maimone, Bert Stevens, Andrii Novak, Joao Vieira and Georgios Zisimopoulos were some notables that all went deep but bowed out prior to the final table.

Notables among the final nine included Martin Pineiro, Vlad Martynenko and Krasimir Yankov - the latter of whom fell in 3rd place for $51,733.95. That’s when Vladislav “chikiriki” Donchev and Grzegorz Grochulski struck an ICM deal. The former earned $77,371.83 while Grochulski earned the biggest slice of the prize at $83,614.15.

It was a similar situation on March 4, as two new events played to a winner and one two-day event gathered for its big showdown 24 hours later. The line-up included one of three $10,300 buy-ins - the second most expensive price tag of the festival.

Plenty of bounty prizes were awarded in Event #15: $525 Bounty Hunters HR Special. The tournament drew a total of 774 entries, with Tom Delaine being the last player to bust without anything to show for. His 4th bullet ended in 117th place without a bounty and cash prize.

Rodrigo “digopapel” Semeghini became the first casualty of the nine-handed final table, which also featured “77Storm77” and “raven symone”. Vitaliy “Durdy” Pankov entered three times and turned that into a payday of $24,488.28. UK-based Italian player Igor “MrSizeMore” D’Ursel was the only one to claim a bigger prize - walking away with $44,250.39 thanks keeping the gargantuan PKO bounty on his own head.

Also featured on the final table were Arthur “meiiYunqi” Conan, Jacopo “JESUSYAAZY” Achille, Rayan “InhalemyQuQ” Chamas, and Mark “MrUnagi!” Metsla. Interestingly, Anatoly Filatov fell in 31st place but earned $10,161.79 thanks to the PKO bounties. He collected them for all but one player until the field was down to the last eight contenders!

In Event #17: $10,300 High Roller, the biggest names of the high-stakes scene clashed and it took almost nine-and-a-half hours to determine a champion. Thanks to plenty of multiple bullets, a field of 138 entries emerged. The top 20 secured a portion of the $1,380,000 prize pool and Pavlo Kolnkovskiy was the last casualty outside of the money.

Mikita Badziakouski missed the final two tables, on which notables such as Kyle Menard, Pablo Brito Silva, Marius Gierse, and Samuel Vousden ran out of chips. “Kevin Pu” bubbled the final table and Mexico’s “DogeCoin2damoon” secured $31,548.18 to essentially break even on three bullets.

Wiktor Malinowski and Joao Vieira hit the rail in 5th and 6th place respectively, leaving all remaining contenders with a six-figure score. Shawn Daniels cashed for $133,037.65 and “hashtag_fold” secured $177,408.66. The remaining two contenders cut an ICM deal and then flipped it in blind preflop. Andras Nemeth ($283,086.42) had more chips when the deal was cut but Rui Ferreira ($268,973.96) was more fortunate at flipping. 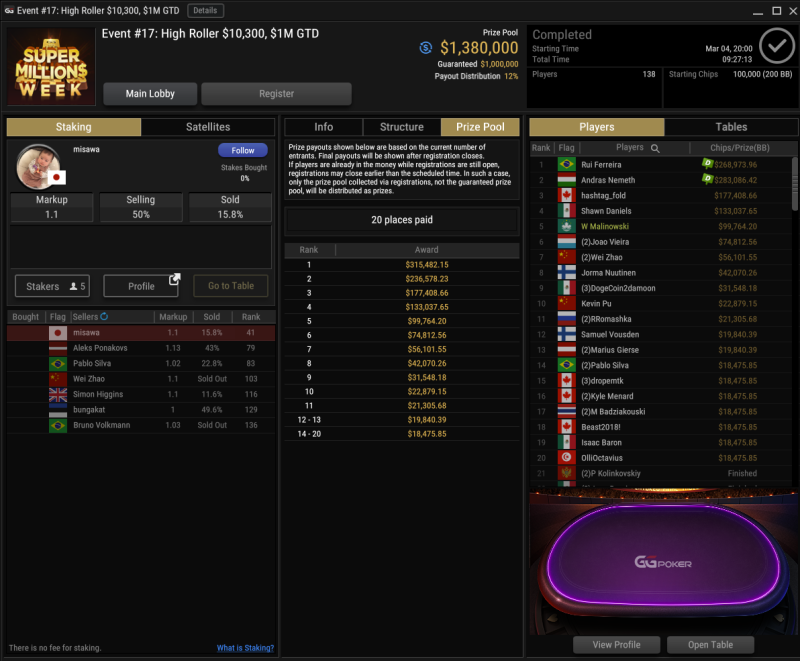 The schedule on March 5 contained three new events - two of which determined a winner the very same day. American superstar Jason Koon showed his prowess in Short Deck, as per his play in the Triton High Roller Events.

It was Koon who converted his second entry into the top prize of $138.993.94 in just over four-and-a-half hours of play. 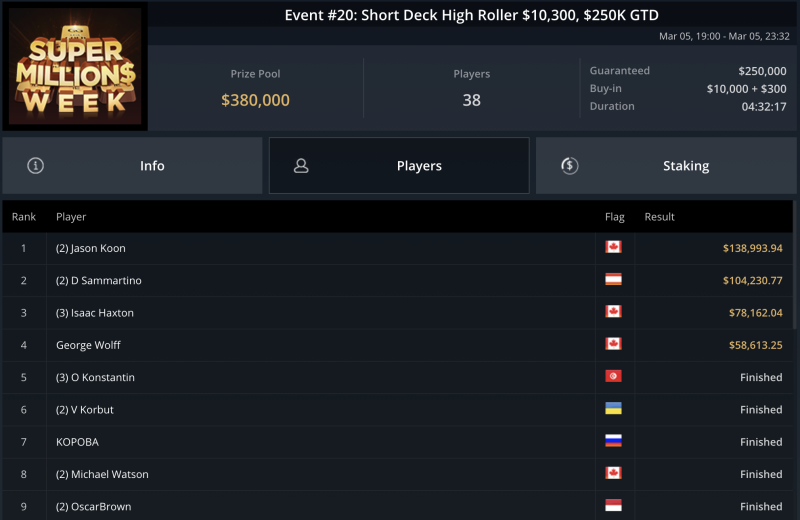 At the same time, Event #18: Bounty Hunters HR Special attracted a solid field of 445 entries for its $525 buy-in. It all wrapped up in under eight hours, and the tournament ended with an unusual heads-up for a PKO tournament.

Two Brazilian players made the final table to battle for a fifth title, while Leonardo Mattos ($3,491.16) and Felipe “Ketzerfelipe” Ketzer ($6,501.17) were among the first three casualties. Sammartino added another final table to his resume of the day, finishing in 6th place for $4,890.10.

“OliveATTON” earned $14,452.77 in combined cashes for the first spot on the podium, while “LittlebeAAr” received $20,698.99 - one third of which came from PKO bounty prizes. Greek poker pro Georgios Zisimopoulos walked away as the winner with a payday of $36,500.07.

One of the few tournaments during the festival to result in a small overlay was Event #19: Friday Main Event, which came with a price tag of $1,050. Only 239 players entered and the top 26 finished in the money.

Among those to bow out in the first two pay steps were Tomas “CoronyMyAss” Jozonis and Abhivav “ObellaCiao” Iyer. Martin Pineiro was in the mix on the final two tables and busted in 16th place, followed by Guoliang “SPARK1207” Wei in 15th. Vlad Martynenko fired six bullets, only to fall in 13th place for $2,896.85.

Stay tuned for the next batch of results, which will focus on weekend action. There will also be a separate write-up about the flagship $10,300 Main Event as well - the biggest Super MILLION$ event to date!

Previous Article
How Much of a Social Game is Poker?
Next Article
Omaholic Series 2021 Launches in March