On March 9, the biggest ever $10,300 Super MILLION$ concluded on the GGPoker Network (GGPN). The completion of this flagship tournament wrapped up busy ten days of high-stakes action on the fastest growing online poker network.

Thanks to 976 entries, the Main Event was the biggest edition of the weekly high-stakes showdown on the GGPN. The previous record was set during the WSOP Online Bracelet Events with 899 entries in Event #83: $10,000 WSOP Super MILLION$.

This record-setting event featured four starting days, and the top 100 spots shared a portion of the $10 million prize pool.

On the first day of the festival (February 28), the first flight took place. It was a busy Super Sunday and 307 entries put the event on track to cover its guarantee. Only 41 players had chips at their disposal and Luigi “shadinho94” Shehadeh ended up as the chip leader with 2,705,791 - accumulating more than 27 starting stacks upon completion of 22 levels at 20 minutes each.

One of the weekday flights was Day 1b, which attracted a field of 142 entries. Only 18 players made it through and Romania’s Vlad-Stefan “HaiFanFan” Lache bagged up the lead in chips with 2,828,433. Included in the top ten were big names such as Thomas Muehloecker, Alex Foxen, Michael Zhang, Wiktor Malinowski, Isaac Haxton and Alexandros Kolonias.

Day 1c surpassed the previous mid-week flight with 183 entries, yet fewer contenders had chips at their disposal when all was done for the night. Only 16 players survived and Isaac Baron became the third-biggest overall stack with 2,689,768. Artur Martirosian followed in 2nd place while Mike Watson, Kenneth Smaron, Yuri Dzivielevski and Vlad Martynenko were also in the top 10 for the day.

Last but not least, the fourth and final starting day on March 7, was the biggest of them all. There were a total of 334 entries, boosting the overall field to 976 entries but still narrowly missing out on its ambitious $10 million guarantee.

Christian Jeppsson topped the last flight with 1,918,599 in chips and the top 10 also included Ludovic “Gr4vyB04t” Geilich, Krasimir Yankov, Kristen Bicknell, Lucas Greenwood and Michael Addamo. Upon completion of level 22, 47 players remained to join all the survivors of the previous three starting days.

The Race to the Bubble and Final Table on Day 2

Dimitrios Farmakoulis ended up as the bubble boy after losing a flip with pocket fives versus ace-ten. The eliminations then came at a rapid pace and min-cashes were handed to Damian Salas, Matthias Eibinger and Wiktor Malinowski.

Two Natural8 High Rollers made a deep run but bowed out on the final three and four tables. Michael Zhang first bowed out in 28th place for $57,913 while Michael Addamo had to settle for 23rd place, which came with a payday of $67,700. Event #30: $25,500 Super High Roller winner Ludovic “Gr4vyB04t” Geilich earned the same prize as the next casualty.

Bert Stevens went from one of the chip leaders an hour prior to finishing in 16th place. He was left short after several clashes with Krasimir Yankov, seeing his ace-king cracked by ace-jack suited as running spades appeared on the turn and river. WSOP bracelet winner Joao Vieira suffered a similar fate. He lost several all-in showdowns against shorter stacks and bowed out in 14th place for $92,515.

Down to the final 13, a six-figure cash was secured and the next pay jump included the likes of Jon Nixon, Day 1b chip leader Vlad-Stefan “HaiFanFan” Lache, and Alex Foxen. For the latter, it was all over when he got it in with ace-queen versus ace-king before the flop and the dominated ace found no help.

Ole Schemion was then eliminated by Alexandros Kolonias on the final table bubble when he came up second-best with ace-jack versus ace-king. The other table completed the current hand, in which Wei Zhao was eliminated to set up an eight-handed final table.

UK’s Ben Ward was the narrow chip leader when the final table started, ahead of Krasimir Yankov and 2019 WSOP Europe Main Event champion Alexandros Kolonias. There were four short stacks and among those, Shankar Pillai even took the lead before dropping back to where he started.

It took more than an hour of play to see the first player fall and that was Benjamin “Geraaaard” Chalot, who found no help with ace-ten against the pocket tens of Thomas Muehloecker. The Austrian ended up in 7th place after losing a big flip with ace-king. Ben Ward held up with queens and jumped into a commanding lead.

Kolonias then went on a spree to knock out Yankov, Pillai and Sebastian “Weizen” Gaehl, reducing the field to a final three. Ward knocked out Javier Gomez after hitting a three-outer, and entered heads-up with a solid lead over Kolonias. He dominated heads-up play and Kolonias won fewer than half a dozen hands before taking a flip with pocket nines versus ace-king suited.

Ward spiked an ace on the flop and prevailed to be crowned champion. The live-streamed final table took all but two-and-a-half hours to conclude and the top two walked away with seven-figure scores each. 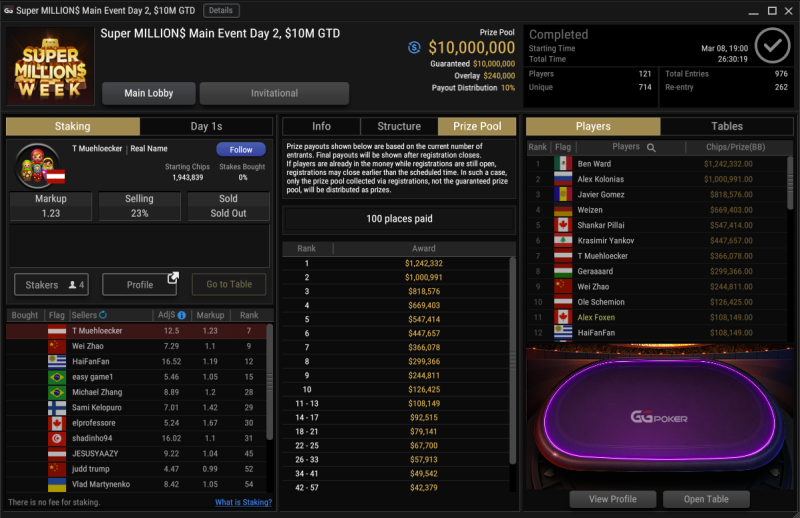