Super MILLION$ Week wraps up with the final results of the last weekend, which featured a total of ten tournaments.

Let’s take a look at all the winners, shall we?

It all kicked off with Event #21: $525 Bounty Hunters HR Special. It drew a total of 664 entries, with each PKO knockout securing at least $125 and the top 98 finishers earning a portion of the cash prize. Niklas Astedt was the bubble boy and unfortunately walked away with nothing, having not collected any bounty either. 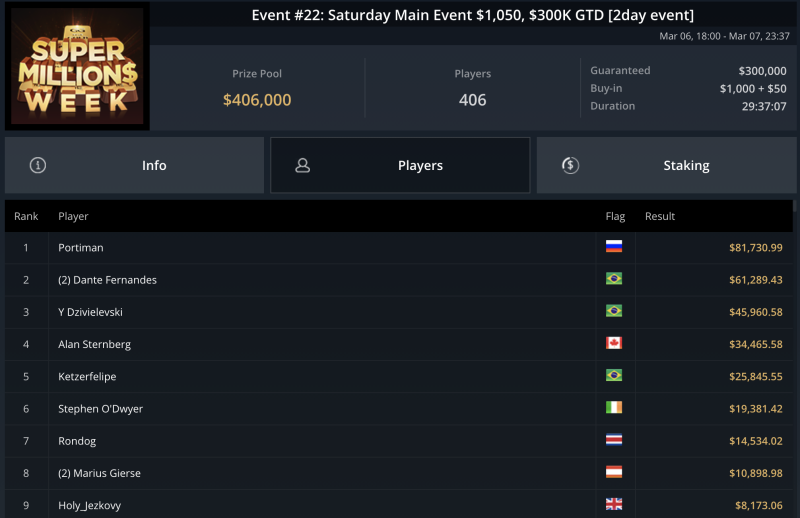 “GauLeS” Wins Next Title for Brazil

After a close call in Event #22, the next two-day event brought a fifth victory to South American powerhouse Brazil. It was in the bargain Event #23: Mini Super MILLION$, which had a buy-in of just $108. The ambitious $250,000 guarantee was missed, with the final tally at 2,160 entries.

Notables on the final three tables included Vinny “Luka Donkbet” Pahuja, Jung Chou “DragonChou” Chen, and Alexandru “Lexandru” Baron. Andrii “BabyShark19” Kozlenko made it to 8th place for $4,431.35 and the top five players all earned five figures. In heads-up, Germany’s “JackNineJ9” had to settle for $24,919.27 as “GauLeS” topped that for a payday of $33,231.21 and a huge ROI.

A strong turnout of 148 entries emerged in Event #24: $5,250 Bounty High Roller, boosting the prize pool to $740,000. Anatoly Filatov earned $8,437.50 in bounties and no cash prize; Mike Watson did the same on the cash bubble to earn $6,875. Next to fall was Felipe Ramos in 20th place and from then on, only Aleksei Barkov failed to collect any bounties.

Yuri Dzievilevski bubbled the final table and his third entry was rewarded with $17,895.12. Artur Martirosian failed to earn a second title and finished in 8th place, followed by big names such as Andras Nemeth, Kenneth Smaron, Lucas Greenwood and Matas Cimbolas.

Bertrand “ElkY” Grospellier was among dozens of well-known players to cash in this event, finishing in 120th place for $2,080.40. David Yan fell just outside the top 50, while featured players Jinho “Yell0w” Hong and “danludan” made the final five tables.

It was bounties galore as many grinders added this event to their busy Sunday schedule. The “Who Loves It More” award went to WSOP Main Event champion Damian Salas who busted in 20th place for $5,213.71. Javier Gomez, Sami Kelopuro and “marathonOG” all too hit the rail prior to the final table.

Notable finalists included Shankar Pillai, Leonid Yanovski, Connor Drinan, and Ami Barer. The latter fired five shells and cashed for $31,006.71, while Belarmino De Souza finished in 3rd place for $101,929.52. Sami Kelopuro was the runner-up for $74,330.44 and Dario Alioto was crowned the champion for a combined cash prize of $158,473.25. 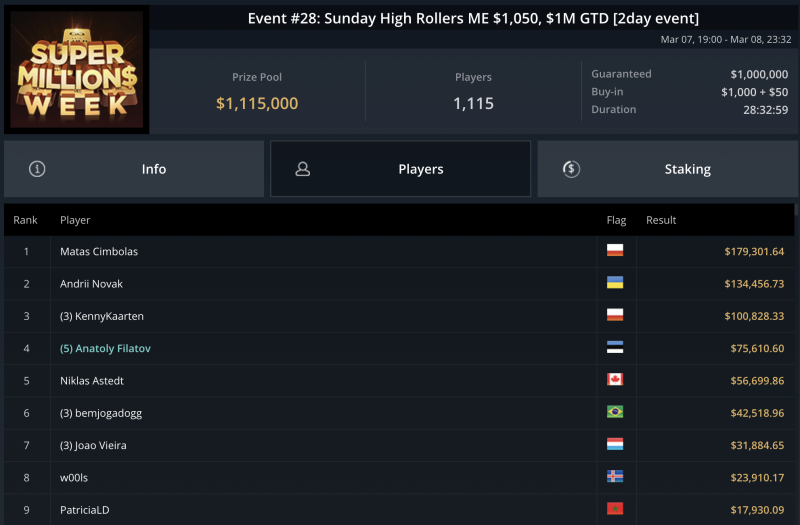 This event saw high stakes action with big names. Elio Fox was the last of them to go home empty-handed, as he ended up the bubble boy. Jason Koon, Justin Bonomo, Timothy Adams, Ami Barer, Ramon Miquel Munoz, and David Yan all min-cashed. 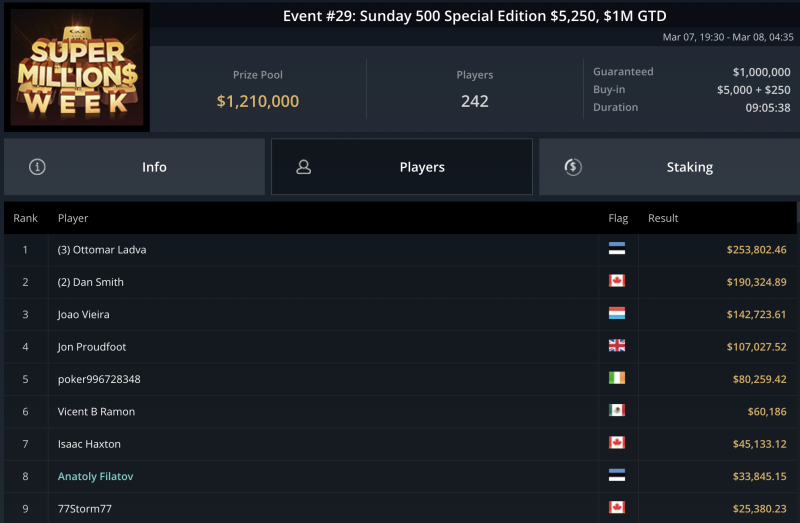 The crown jewel of the final Super Sunday was certainly the joint most expensive tournament on the schedule. The turnout was even bigger than the week before, as 71 unique entries fired an additional 56 re-entries. Thanks to the final total of 127 entries, the prize pool grew to $3,175,000 and the top 17 cashed.

Seth Davies, who finished runner-up in the first edition of this event, ended up the bubble boy when kings were cracked by queens. Min-cashes were handed to Rainer Kempe, Joakim Andersson, Rui Ferreira, and David Peters. Stephen Chidwick and Sam Greenwood made pay jumps, while Wiktor “limitless” Malinowski bubbled the final table in a flip.

Heads-up saw Bert Stevens with a narrow chip lead, and he agreed to an ICM deal with Ludovic “Gr4vyB04t” Geilich. Two preflop flips later, Stevens was out in 2nd place with $655,289. Geilich earned slightly less at $635,080 but it was the biggest prize of the Scotsman’s career. 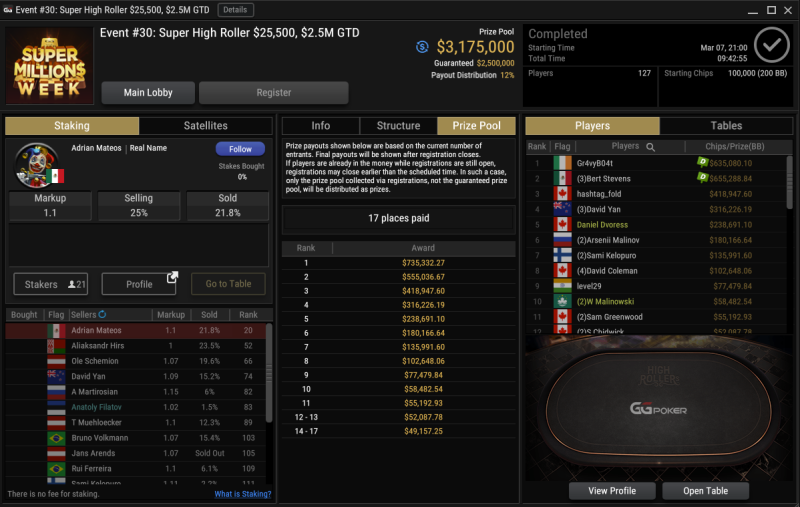 These massive paydays were eclipsed only by the top finishers in the $10,300 Super MILLION$ Main Event, but more about that in the next blog entry!