Super Sunday on the GGPoker Network (GGPN) always provides plenty of High Rollers action, giving railbirds the opportunity to watch some of poker’s biggest names in action. October 18th was no different; read on to find out more.

The MILLION$ Series at a Glance

With a price tag of just $100, the Global MILLION$ have been very popular among players on a budget. This time, 1,339 entries survived their respective starting days to reach the final day. The $1,000,000 guarantee was not surpassed, and the top 1,000 finishers earned at least $287 for their efforts. 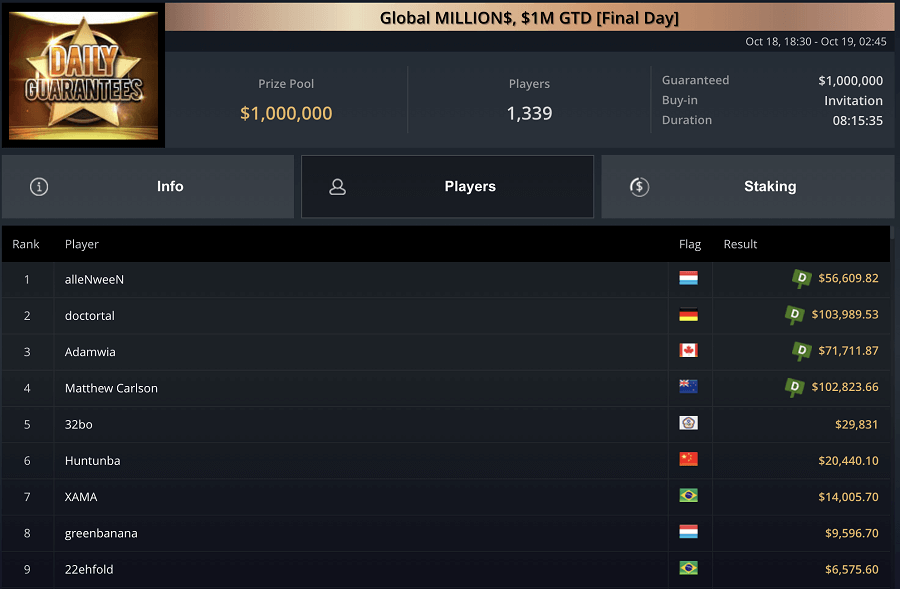 A deal was cut in heads-up and eventual runner-up Renan Bruschi ($232,591.60) earned a near-identical amount as Stephen Chidwick, who clinched the victory and bagged $232,843.91 for their efforts. 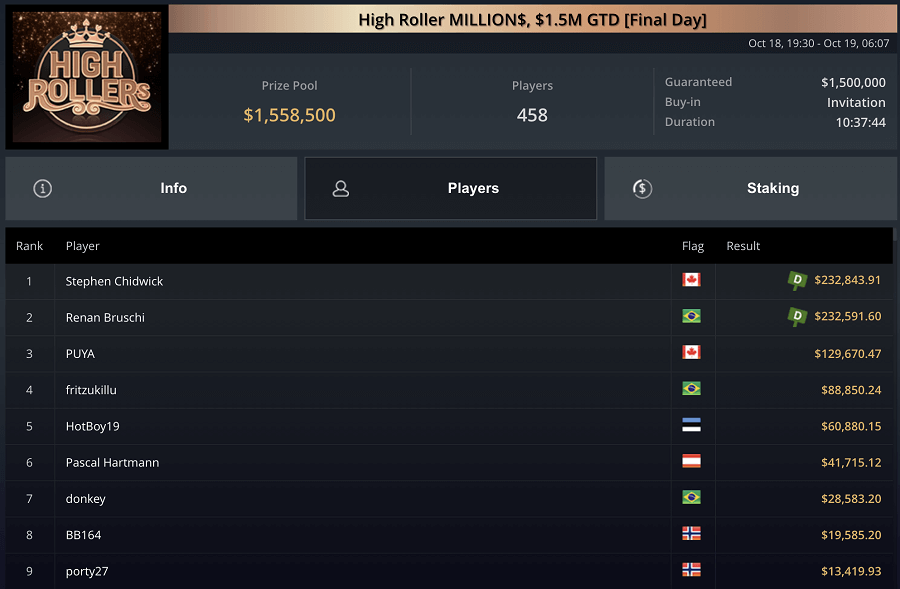 Bert Stevens bubbled the $5,250 Blade Opener out a field of 32 entries, and Artur Martirosian min-cashed. Big names like George Wolff, Nick Petrangelo and Isaac Haxton followed, as Pascal Hartmann converted his third entry into the top prize of $68,253.43. 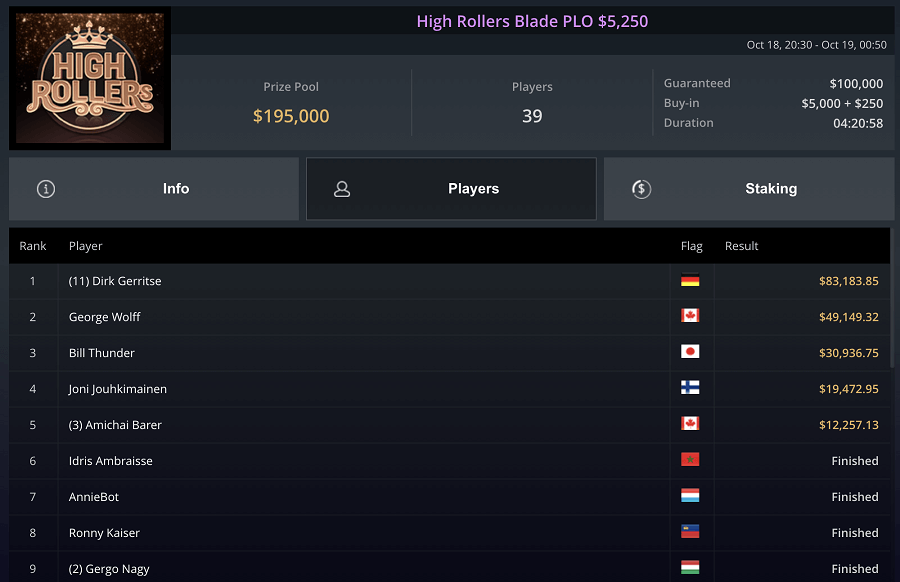 The flagship High Roller event crowned a champion on Tuesday, and it was one of poker’s most-decorated players that earned the biggest payday in the $10,300 Super MILLION$ High Rollers. A total of 151 entries created a prize pool of $1,510,000, and nine players out of 20 that cashed returned to their virtual seats.

First on the rail were David Miscikowski and Sean Winter. The rise of Ole Schemion kicked off when Matthew “Nator” Hyman three-bet jammed with ten-trey suited and failed to beat the eights of the German wizard.

Brazil’s Brunno Botteon then lost a flip with ace-queen against the pocket sevens of Joakim “MrGambol” Andersson, and in a flash the field was whittled down to just five.

Philippe D’Auteuil and Stephen Chidwick were the next two to go, having locked up six-figure prizes. Schemion then knocked out Matthias Eibinger ($191,139.87) when ace-seven beat sixes, thanks to plenty of hearts on the board. 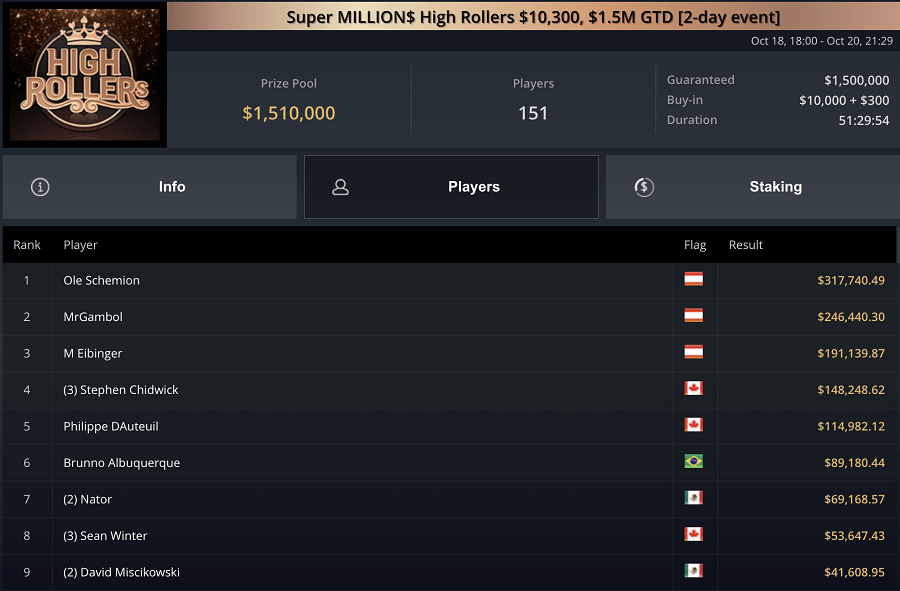 October 20th also saw the conclusion of the penultimate championship event in the World Poker Tour Asia Online Series. It was the 17th out of 22 events to award a trophy, and Malaysia became the 9th country to join the winner’s circle.

The most affordable national Championship Event of the entire festival proved to be the most popular, as 638 entries more than doubled the guarantee. A total of 89 players took home a portion of the JPY17,608,800 (~$168,431) prize pool.

Among those to come up just short were Natural8 Team Hot member Kosei Ichinose – winner of the WPT Cambodia Championship – and Anson “Tara@0z” Tsang, with the latter receiving his buy-in back thanks to the Early Bird Bubble Protection feature.

Fellow Natural8 Team Hot ambassadors Kitty Kuo (49th place) and Pete Chen (38th place) made the money, but their bid of earning the title was not successful. Other notables that bowed out before the final table were Di “LuXDi” Lu and Yu “kris16” Du. China’s “hanxing0068” then lost a flip with fives to the ace-queen of Matthew “Jokerine M” Chan to finish in 10th place.

The final table was then heavily dominated by Chan and Wai Kiat “Mr Lee” Lee, as both dispatched four opponents each to end up in the top two spots. Three of the first four casualties all hailed from China, while Japan’s Hiroki “oniku29” Matsuura and “KABAO” had to settle for 5th and 4th place respectively. 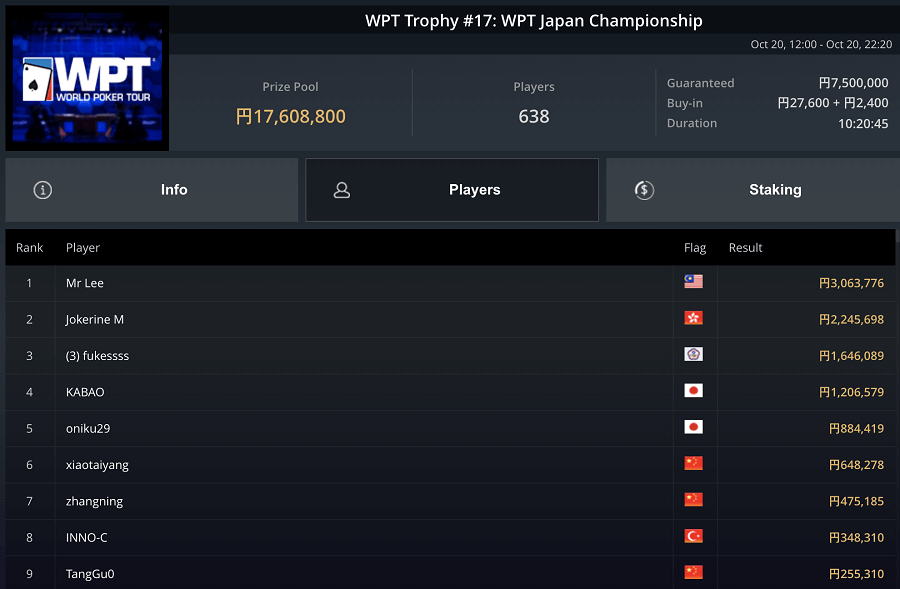