The World Series of Poker 2020 is happening online on GGNetwork, and Event #32: $100 The Opener saw the biggest field of entrants in WSOP bracelet event history. An unprecedented total of 29,306 entries resulted in an eventual prize pool of $2,571,216, smashing its $2 million guarantee.

Day 2 saw a gruelling eleven hours of intense grinding amidst a field of 4,599 returning players, before Brazil’s Marcelo “Marolo” Jakovljevic Pudla eventually came out on top. He walked away with the lion’s share of the prize pool at $265,880, as well as his maiden WSOP gold bracelet. In total 3,039 players cashed, with a minimum payday of $282.

Pudla held the lead at the start of the final table, and continued to dominate. He knocked out six opponents and finally went heads-up against Israel’s Ronit “Songjoy” Chamani. Chamani had earlier eliminated Dejan “627265” Kaladjurdjevic in third place, and took a sizeable lead with more than a billion chips.

The two battled it out for awhile, but Pudla eventually ended up with an ace high to secure the pot and title, while Chamani walked away with $198,067 for her runner-up finish. 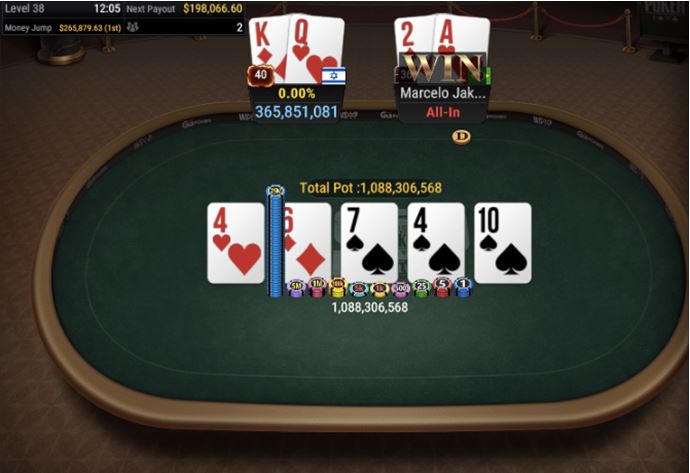 Being a Natural8 player, Pudla not only won the WSOP bracelet but he also walked away a Team Bling member (as part of Natural8’s Winner’s Circle promotion).

Team Bling members will receive a sponsorship package worth between $7,500 to $15,000 as part of their win, depending on buy-in of the event won. If a Natural8 player wins the WSOP Main Event, they will become captain of Team Bling with a 12-month ambassadorship, as well as walk away with a massive $100,000 in live event and online sponsorships.

WSOP Online 2020 is happening now until 6 September 2020. There are a total of 54 gold bracelets to be won, and marks the very first time players outside of the US have a shot at winning a bracelet online.