The World Series of Poker Winter Online Circuit has recently concluded on the GGPoker Network (GGPN), and the next major online festival is here. From 1st - 21st February, GGPN will host the online edition of the Asia Poker League for the very first time.

This inaugural APL Online Series will feature CN¥80,000,000 in guarantees, which equals nearly $12.5 million. Even though this festival is geared towards the Asia Pacific region, events will be open to all players.

Let’s take a brief look at the history of APL and highlight some interesting facts about this upcoming online festival.

What is the APL?

Founded by Korean games promoter Judic Kim, the Asia Poker League came to life in 2016. The first live edition took place at the Beijing Poker Club (BPC), with the Main Event attracting a field of 465 entries. In April 2017, their attendance grew to 911. For their second live festival in November 2017, they headed to Shanghai.

While predominantly focused on the central Asian region, the APL has also headed to The Star Casino in Australia on three occasions. Further stops have also been hosted in Vietnam, South Korea, Taiwan, and the Philippines.

This will be the first time an entire APL festival will take place in the virtual arena. 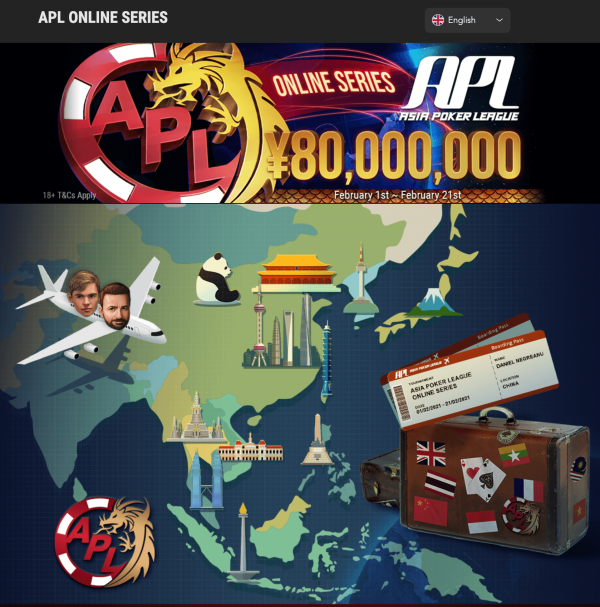 All but two of the 16 trophy events are named after an Asian host city in Vietnam, South Korea, Philippines, Taiwan, Macau, or China. Some of the tournaments to feature multiple starting days include Event #1 CN¥188 Tip-Off, Event #10 Asia Poker League Championship, as well as the Main Event.

On top of all the individual prizes, the APL Online Series also follows previous festivals in having weekly Country Leaderboards. All players from the top three countries (who earn at least 1 point that week) will be eligible to enter the weekly CN¥100,000 Freerolls. Only the top ten finishers in each event will contribute to the weekly country rankings.

The entire APL Online Series festival will be deployed during the server maintenance on Feb 1st, and the first trophy event will play down to a winner as of Feb 6th. Plenty of satellites will be available, giving poker enthusiasts with smaller bankrolls a shot at winning one of the exquisite APL Jade Trophies.