The action over at the GGPoker network has been heating up over the last month, with the 2020 World Series of Poker Online at the halfway point of their 54 bracelet-offering throughout the summer. However, it’s not all tournament poker that’s drawing the eyeballs, as some of the highest cash games the online poker hasn’t seen since the glory days of Full Tilt Poker are happening over there as well.

In a $500/$1,000 cash game with a $1,000 ante, Wiktor Malinowski — famed under his online moniker “limitless” — and Michael Addamo played the biggest NLHE cash game pot on record. The massive clash happened over at Natural8, part of the GGPoker network, in an invitation-only VIP cash game. Alongside Malinowski, Chris Brewer, Tan “4321” Xuan”, and “UnderO”, who resides in Malta, completed the line-up.

The two players in the massive hand are familiar among railbirds that keep track of the nosebleeds. While Malinowski is a rare sight in tournaments — the Pole has just five tournament cashes with three coming from Super High Rollers — he’s considered one of the all-time greats on the highest online cash stakes.

In fact, mere days ago, the “High Stakes Poker End Boss” appeared on the popular Joe Ingram podcast where he issued a challenge to the poker world. In the podcast, the Pole dropped a few gems, such as offering to play opponents drunk and drink a whole bottle of wine on stream to entice any heads-up action he can get.

Malinowski was slated to appear on the upcoming Run it Once Heads Up Legends Showdown but opted out of it due to the very high-stakes action going on right now, with this pot being a result of that.

While Addamo might be more notable for his tournament prowess, sporting two WSOP bracelets and $8M+ in lifetime winnings according to The Hendon Mob, he can certainly hold its own when it comes to the highest of stakes. “imluckbox”, as he’s also known, is considered one of Australia’s very best players alongside the likes of Kahle Burns and Jonathan Karamalikis.

Both of them had 400+ big blinds stacks in front of them when the fateful hand took place.

The Hand: Kings Against Aces

Addamo showed K♠-K♣ for a pair of kings, but Malinowski had him pipped with the blades and showed A♠-A♣ to claim the gigantic pot of $842,438.62. While Malinowski drew the headlines with this big pot, the pair has been tangling back and forth with Addamo winning most of it back in other sizable pots. 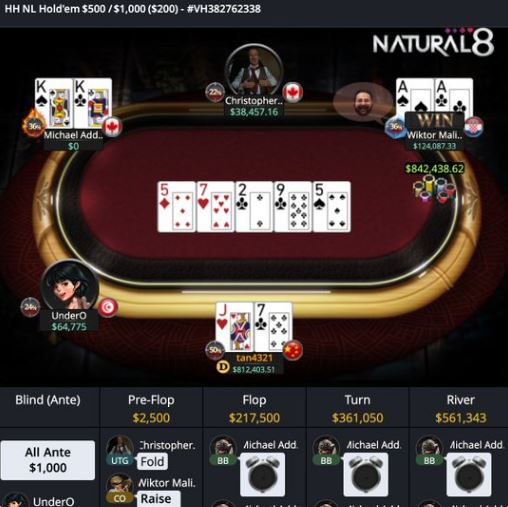 According to HighStakesDB, who’s been keeping track of high-stakes cash pots for over a decade, it’s been the largest recorded online No-Limit Hold’em cash game pot of all time. The previous record in their database was a $723,941 pot played all the way back in 2008 on Full Tilt Poker between none other than Tom “durrrr” Dwan and one of his famous high-stakes rivals at the time, Di “urindanger” Dang.

Similar to Malinowski and Addamo, it also involved kings versus aces and deep stacks between two aggressive players. Click on the replayer below to see the hand in action. 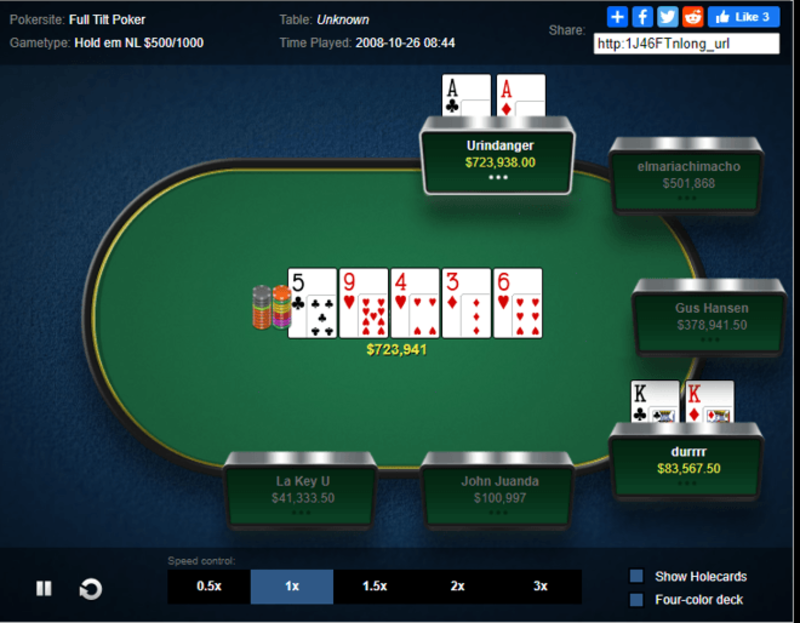 While it’s the biggest online No-Limit Hold’em pot on record, it still falls shy of some of the monstrous pots Pot-Limit Omaha has seen over the years. Especially during the wild early Full Tilt Poker days of the past decade, big six-, and even seven-figure pots kept railbirds glued to their screens.

The record for biggest online cash game pot of all time still stands between Patrik Antonius and Viktor “Isildur1” Blom, who played a $1.35M pot back in 2009 with Antonius ending up as the victor.