The WSOP 2020 Online Closes With a Bang

Big Winners at the Final Week of the WSOP 2020 Online

The World Series of Poker Online 2020 has officially wrapped up, and some big names were added to the Winners List in the final 10 days of the festival. Let’s take a look at some of these events and their respective final results.

One of the winners was “retired” poker superstar Fedor “CrownUpGuy” Holz who came out on top of a 127-strong entry field in Event #79: $25,000 Heads Up No Limit Hold’em [People’s Choice Event, Most Popular].

On the journey to earning his second gold bracelet, Holz defeated Luc Greenwood, Anton Morgenstern, Robert Flink, George Wolff, and Justin Bonomo on the first day of the event to reach the semi-final. Bonomo had denied Holz a second bracelet back in 2018, when he crowned a stellar year with a victory in the $1,000,000 Big One for One Drop.

Holz then came out on top against Sergi Reixach in heads-up when he overturned an early 2-1 advantage of the Spaniard and flopped a flush against top pair. Only one opponent stood between the German player and his second victory in this festival, but Brazil’s Brunno Botteon lasted all of 15 minutes. Holz flopped a set of fives and Botteon called it off with pocket tens for an overpair to come up blank.

This final table finish for Botteon came with a payday of $622,300. The top prize of $1,077,025 for Holz was distributed to plenty of stakers, as he had sold 75% of his action for the tournament using the in-client staking feature.

Adnan “Bolazar” Hacialioglu defeated a field of 1,910 entries in Event #78: $1,000 Turbo 8-Handed after overcoming several well-known opponents on the final table such as Andriy “smbcall911” Lyubovetskiy, Jargo “bungakat” Alavali, Niko “niNohR” Koop, Tim “TMay420” West and Robin “Kabuzzi” Berggren. It was the second bracelet for Finland in this festival, and Hacialioglu earned a payday of $259,842 for his efforts.

Two events remained in which the game type was only revealed on short notice; one of them was Event #80: People’s Choice Event: a $600 Six-Max Event. The tournament drew a total of 2,408 entries and generated a prize pool of $1,372,560. Chris Ferguson, Marc MacDonnell, Joao Santos, and Vahe Martirosyan were amongst those to reach the final table. In heads-up, American grinder Jeffrey Dobrin defeated Idris Ambraisse to earn his maiden bracelet and $189,666.

The other event was Event #81: People’s Choice Event [Spin the Wheel], where the format was determined via live stream. This $1,050 NLHE Bounty Six-Handed event drew a field of 1,925 entries, all battling for a share of the $1,925,000 prize pool. Nicolo “Paquitooo” Molinelli came out on top against Kyle “Eskimo Bro” Menard, walking away with a total prize of $243,415 while Menard settled for $128,417.

Seasoned pros Elio Fox and Mike Leah fell and when it was down to five players, Razavi had accumulated 60% of the chips in play. She lost a big pot with set under set, but earned back the lead with Martin Zamani, Leonid Yanovski and Andre Difelice all hitting the rail.

Another big name was waiting in heads-up as Razavi faced American mixed game specialist Dylan Linde. Razavi started with a 2-1 lead but Linde fought back twice to even temporarily take the top spot. However, Linde was then short once more and ran into a full house to settle for a consolation prize of $147,447. 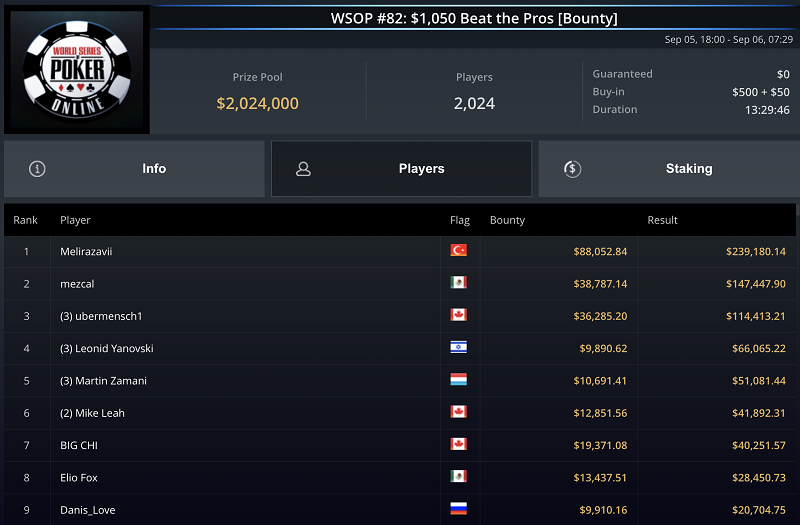 A humongous field of 34,787 entries emerged in Event #84: $100 WSOP MILLION$ as all Day 1 survivors returned to their seats to battle through thousands of opponents. Only the top 3,600 finishers earned a portion of the $3,200,404 prize pool, and players from eight different nationalities reached the nine-handed final table.

Canada’s Christine “Yunaa” Do bubbled the final table, and it then took about half an hour for arguably the most-well known name, Alexandre “SexyBaldGuy” Mantovani, to be the first to bow out. As the field further thinned, Alexander “Kobbajun” Kobbeltvedt established himself near the top and entered heads-up with a big lead against Kostiantyn “vksOk” Vovhcenko.

Vovhcenko doubled several times to take the lead and even got it in ahead to seal the victory with ace-trey versus nine-six, but Kobbeltvedt eventually got there. Ultimately, the Norwegian player won a flip with nine-seven versus pocket treys to earn the WSOP bracelet and top prize of $296,403, while Vovhcenko took home $203,081. 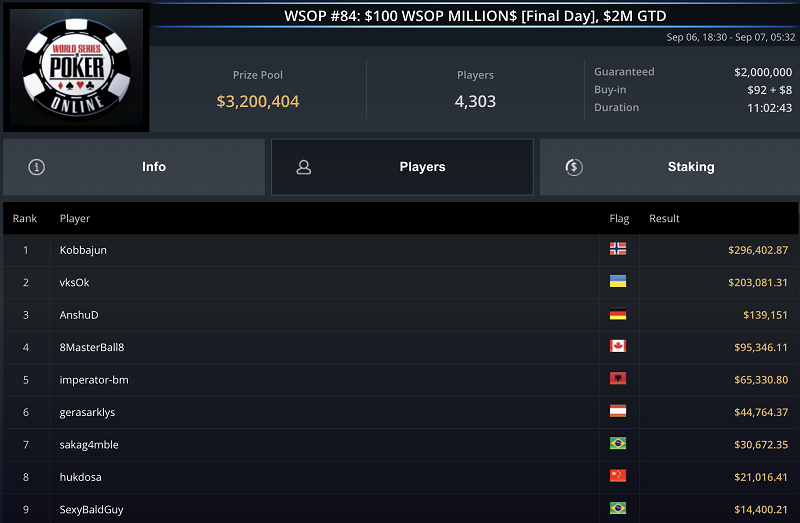 In Event #85: $500 The Closer, a field of 4,012 entries emerged to create a prize pool of $1,905,700. Belgian poker pro Michael Gathy earned his fourth career bracelet after defeating Yuan Yuan Li in heads-up. Li could have been the fourth female player to win a bracelet this festival but came up short by just one spot. Li earned $194,248 for her efforts.

Gathy’s victory came with a payday of $272,504 and puts him one bracelet ahead of Davidi Kitai, as the only two Belgians appearing in the list of winners thus far in the festival. The final table also featured notables such as Toni Ojala, Paul Hockin, Craig Mason and Shankar Pillai. 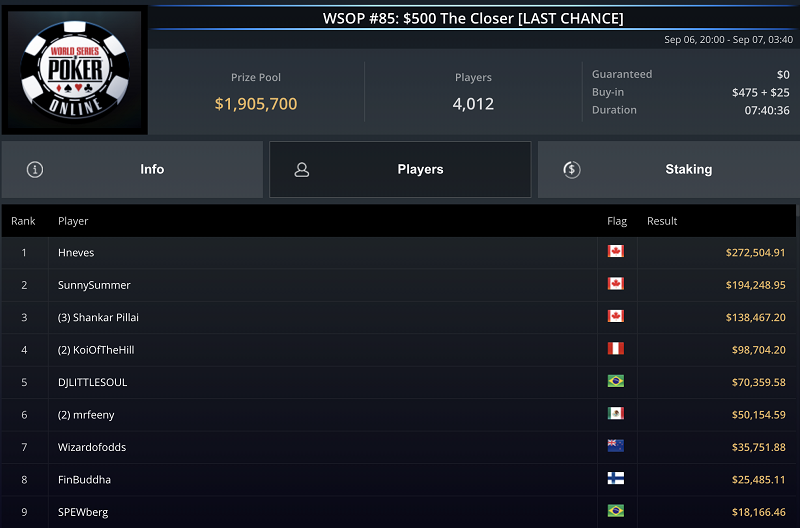 A third bracelet event kicked off on the final day of the festival; however the conclusion of Event #83: $10K WSOP Super MILLION$ was postponed to the following Tuesday once the nine-handed final table was set. It took more than 11-and-a-half hours to whittle down the field of 899 entries, which ensured that the initial guarantee of $5 million was easily surpassed to create a prize pool of $8,720,300.

Among the final nine contenders were also two Natural8 players: Christopher Kruk and Suraj Mishra, who were the top two stacks with seven remaining. However, that changed in rapid fashion as Connor Drinan doubled and then knocked out Kruk with aces versus ace-jack. Next to fall was Mishra when pocket tens were cracked by Drinan’s pocket nines.

Only two days prior, Drinan was reportedly on just a few blinds on the money bubble. His play did a complete 180, as he was unstoppable on the final table. All further eliminations were notched up by Drinan who dispatched Sylvain Loosli, Chris Oliver and Viktor Ustimov to enter heads-up with a commanding lead against Daniyar Aubakirov.

Aubakirov pulled off an incredible hero call with bottom pair to double, and even managed two further double ups. However, Drinan was not to be denied and got there with ace-nine versus ace-jack. Both players earned seven-figure prizes as Drinan claimed $1,423,049 and Aubakirov took home the consolation prize of $1,041,414. And with that, the successful World Series of Poker Online 2020 officially came to an end on September 8th. 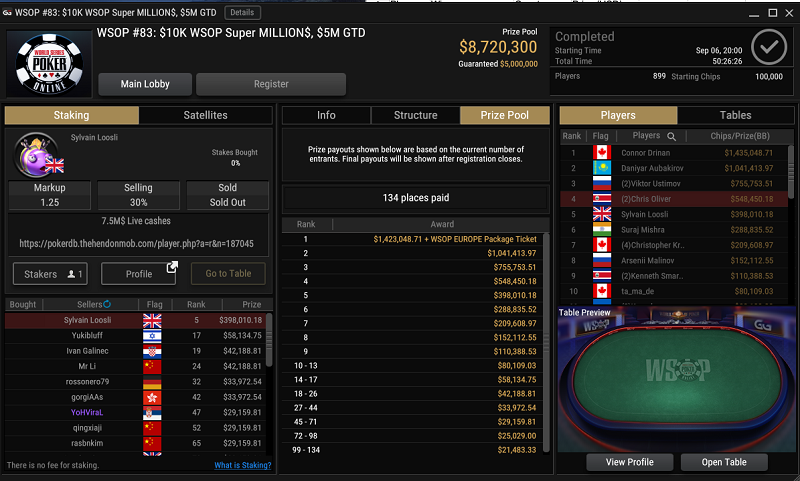 Players who missed out should check out the GGSOP low stakes tournaments, with a full line-up of WSOP classics that won’t break the bank. Buy-ins start from only $2.50, with a total of $6.5 million guaranteed over the entire series. Players who sign up to play on Natural8 will get a FREE GGSOP ticket, as well as access to Daily Freerolls and the GGSOP TEN TEN TEN! Freeroll.