There’s Leaderboards, $1 Hero Tournaments and Freerolls for all to enjoy.

One third of all World Series of Poker Circuit Rings have been awarded mid-way through the inaugural WSOP Circuit Online Series on the GG Network and it was yet another Brazilian that claimed the title and ring. A huge field of 3,615 entries emerged in Event #6 Deepstack Bounty Hunters and the $210 buy-in easily surpassed the guarantee as $723,000 in total prizes were awarded.

Just a few days ago in Event #5 BIG $500, three Brazilians finished on top and this time it was Gustavo “JoaoValli” Pinto that clinched the second Brazilian title of the festival and $84,706 for his efforts. The top 10 finishers hailed from 10 different countries and there were 15 different nationalities among the top 20 of the tournament.

On his road to victory, Pinto doubled two times through UK’s “mrbradleyy” and knocked out the last five opponents one by one to end the tournament in dominating fashion after nearly 13 and a half hours of poker action. His nickname is a homage to fellow countryman Joao Valli, who was also part of the Samba Poker Team and finished 5th in the 2019 WSOP Event #53 $800 No Limit Hold’em - Deepstack 8-Handed in Las Vegas.

Natural8 player “HowdyTeexas” came close to winning but had to settle for the runner-up spot and $40,384.90 in cashes when his treys ran into kings. 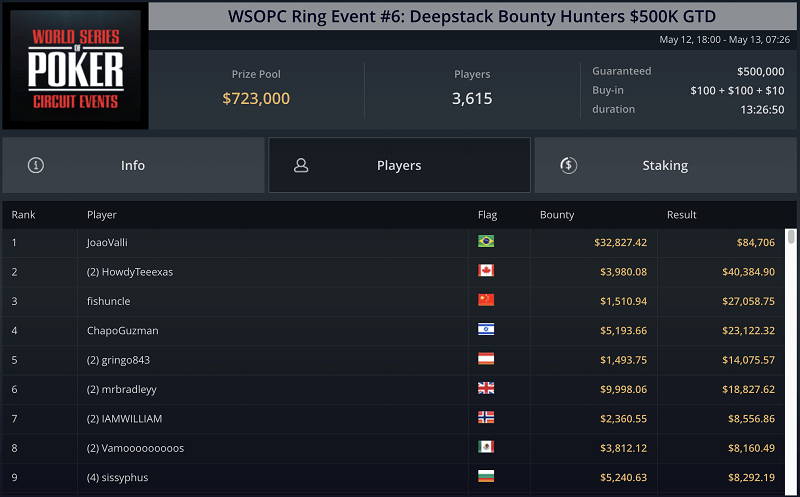 The spotlight will certainly be on Event #8 $25,000 High Roller Championship, featuring an incredible guarantee of $10,000,000. Some of the biggest names in poker will take part and superstars such as Bryn Kenney and Fedor Holz are already registered. The one-day tournament comes with a starting stack of 50,000 chips and levels of 20 minutes.

All four-card lovers will embrace the opportunity to battle for at least $1,000,000 in guaranteed prizes in Event #11 $10,000 PLO High Roller Championship. The levels last 13 minutes each and a starting stack of 50,000 provides 100 big blinds in the first level of the tournament.

There will be many other events throughout the week leading up to the 17th of May as well. The Daily Mains with buy-ins of $33, $50 and $500 amongst others, are still available and There are Bounty tournaments for those who enjoy a little knockout action as well. All these WSOPC Series tournaments are still eligible for the Natural8 Exclusive Leaderboards with up to $10,000 given away daily.

Players on Natural8 can also benefit from exclusive promotions to join the action for less and compete for WSOP packages if they claim a coveted WSOP Circuit ring of their own.

Besides the regular satellites for each WSOP Circuit ring event, pay special attention to the $1 Hero tournaments as they only award entries to satellites to the main events but the unique chance at earning a $500,000 ambassador package. If you don’t have a big bankroll, the affordable satellites and the $1 Hero tournaments are one way to live the dream for less. However, poker enthusiasts can even win by starting from scratch as tickets for ring events will be awarded in the Natural8 WSOP Flash Freerolls.

Join Natural8’s Flash Freerolls for a ticket to WSOPc Events 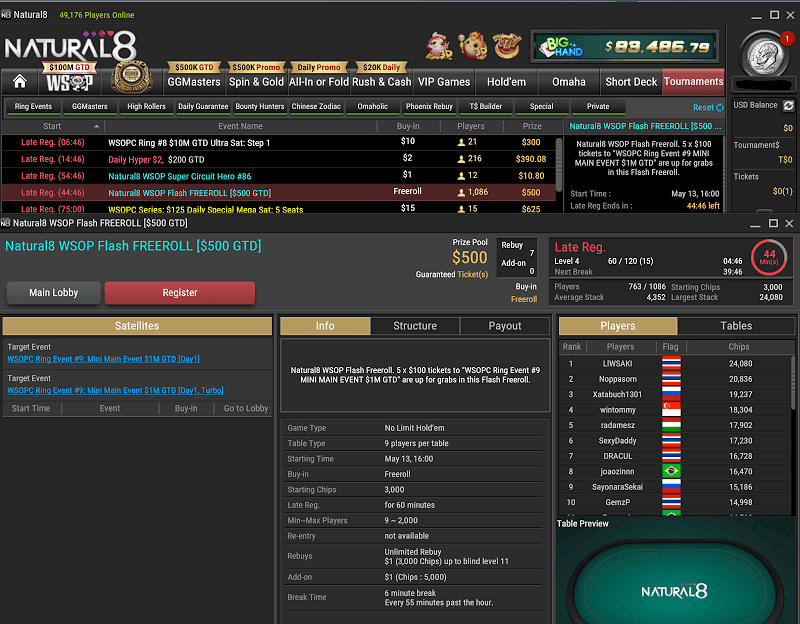 These special events are appearing very sudden in the private tournament section and will only get announced two hours prior to the start of each Freeroll. Stay tuned to the Natural8 social media channels on Twitter, Facebook and Instagram to find out when the next one will take place!