The WSOP Super Circuit Comes to A Thrilling Conclusion

The WSOP Super Circuit Series 2020 Comes to A Thrilling Conclusion

The inaugural World Series of Poker Super Circuit Series 2020 came to a thrilling conclusion on 31 May, with four WSOP Circuit ring winners crowned and more than $20 million in prize money awarded on Super Sunday. The series ended on a high note with a new millionaire was crowned in the Main Event.

Event #14 Deepstack Bounty Hunters drew a staggering 3,463 entries and a total of $692,600 in bounty and cash prizes. Seven different nationalities appeared among the nine finalists, with China and Mexico having two representatives each on the final table.

In heads-up, it was “BaccaratKing” (Mexico) that prevailed against “tepuseenFD” (Uruguay) when he flopped top two pair with jack-six and their opponent had jack-ten for top pair. “BaccaratKing” kept the massive bounty to earn a payday of $89,042.44 while “tepuseenFD” cashed for $46,886.58 including bounties. 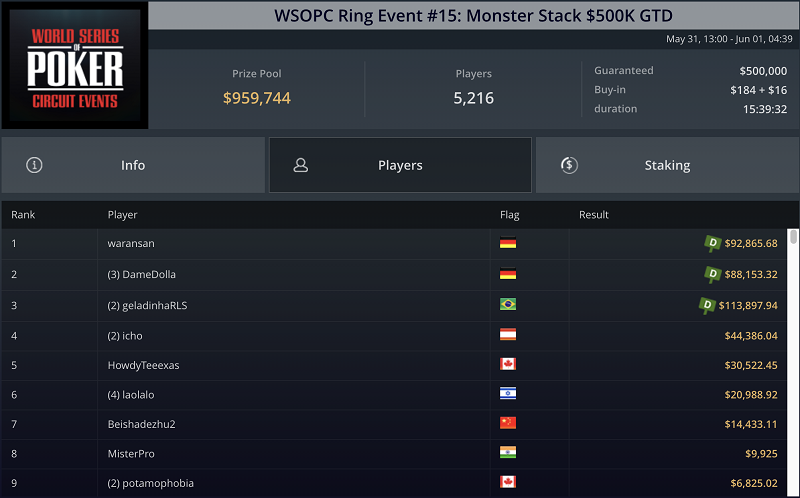 The first of four WSOP Circuit ring events to kick off Super Sunday was Event #15 Monster Stack. With a buy-in of $200, the tournament featured levels of 15 minutes and a starting stack of 30,000 in chips. Thanks to 5,216 entries, the guaranteed prize pool was nearly doubled and a total of $959,744 in cash prizes were up for grabs.

An enormous 863 spots were paid and as the field thinned down, mixed game specialist George Wolff came up short of the final three tables while Sergey Rybachenko had to settle for 21st place. Three Natural8 players made it to the final table including “HowdyTeeexas” (5th place for $30,522.45), Austrian poker streamer “icho” (4th place for $44,386.04) and “DameDolla” in 2nd place for $88,153.32.

“DameDolla” was part of a three-way deal that also included Brazil’s Rafael “geladinhaRLS” Eltz (3rd place for $113,897.94) and eventual champion “waransan” from Germany, who collected $92,865.68 and the title. Eltz claimed the biggest prize of the tournament but missed out on the Circuit ring. 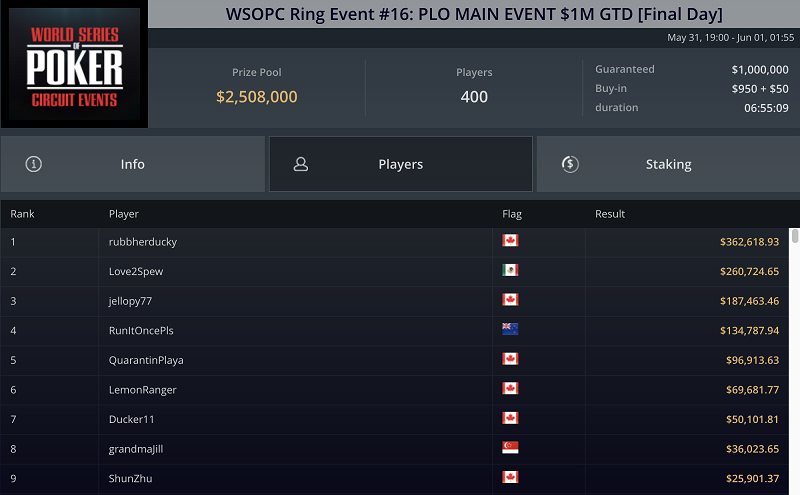 For Event #16 PLO Main Event, guarantees were once again smashed with 2,627 entries recorded to create a prize pool of $2,508,000. The top 368 spots were paid and 305 hopefuls returned to their seats in search of a champion.

Some notables that ended up with a share of the prize pool outside of the top 100 were Isaac Baron, Pakinai Lisawad, Pascal Lefrancois, Kahle Burns, Lester “mon$terdad” Edoc, Sergi Reixach, Ami Barer, Pascal Hartmann, Mike Watson and Mikhail Semin.

Fedor Holz started the final day as one of the chip leaders but came up short, as did Andras Nemeth, Joao Vieira and Gavin Cochrane who all bowed out before the seven-handed final table was set. Four Canadians were among the top six finishers and two Natural8 players entered the spotlight for possible victory. 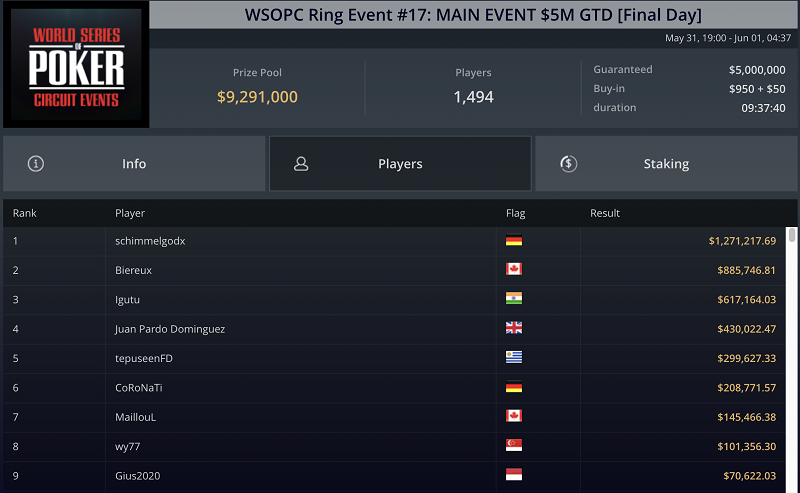 Quite easily the highlight of the entire festival schedule, the $1,000 Main Event offered players the opportunity to win a seat for one of the Day 1s through many satellites for as little as $11. Once the final heat closed for registration, an incredible 9,779 entries emerged to once again smash guarantees for a prize pool of $9,290,050.

Only 1,494 players returned to their seats and the money spots were in sight with 1,196 spots paid. It only took an hour for the money bubble to burst and from there on, hopefuls were knocked out by the dozens every minute to eventually conclude a thrilling day of poker action.

Former tennis giant Boris Becker showcased his skills on the online poker tables and earned $4,938.59 for his 263rd place finish. High stakes cash game player Fedor Kruse made it even further and finished in 137th for $6,056.18, rapidly followed by Luuk Gieles and Dan Smith. Poker superstars Alex Foxen and Isaac Haxton reached the top 100 and Justin “PetitFoxx” Zhu could only muster 77th place.

Daniel Dvoress and Joao Vieira bowed out on the final four tables, and 2019 World Series of Poker Europe Main Event champion Alexandros Kolonias saw his run come to an end in 19th place. Artur Martirosian, who has taken the High Roller scene by storm in recent months, almost added another major title but ultimately finished in 12th place.

It was Germany’s “schimmelgodx” who became the fourth millionaire by claiming the top prize of $1,271,218. Not only did he earn the coveted WSOP Circuit Main Event ring, but also free entry to the live WSOP Global Casino Championship. 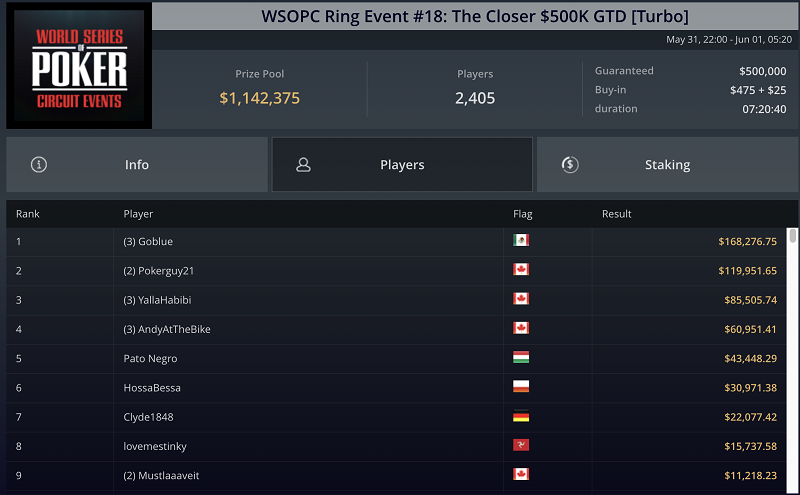 The last event to award one of the sought-after WSOP Circuit rings was Event #18 The Closer, with a total of 2,405 entries and a prize pool of $1,142,375. Three players, including Natural8’s most recent “Team Hot” member Thai Ha, took advantage of the bubble insurance feature and received T$500 in return.

A turbo structure reduced the huge field to a winner in just seven hours of play, and American poker pro Craig Varnell added another WSOP Circuit ring to his collection. Playing under his moniker “Goblue”, Varnell fired three bullets on the road to the top prize of $168,276.75.